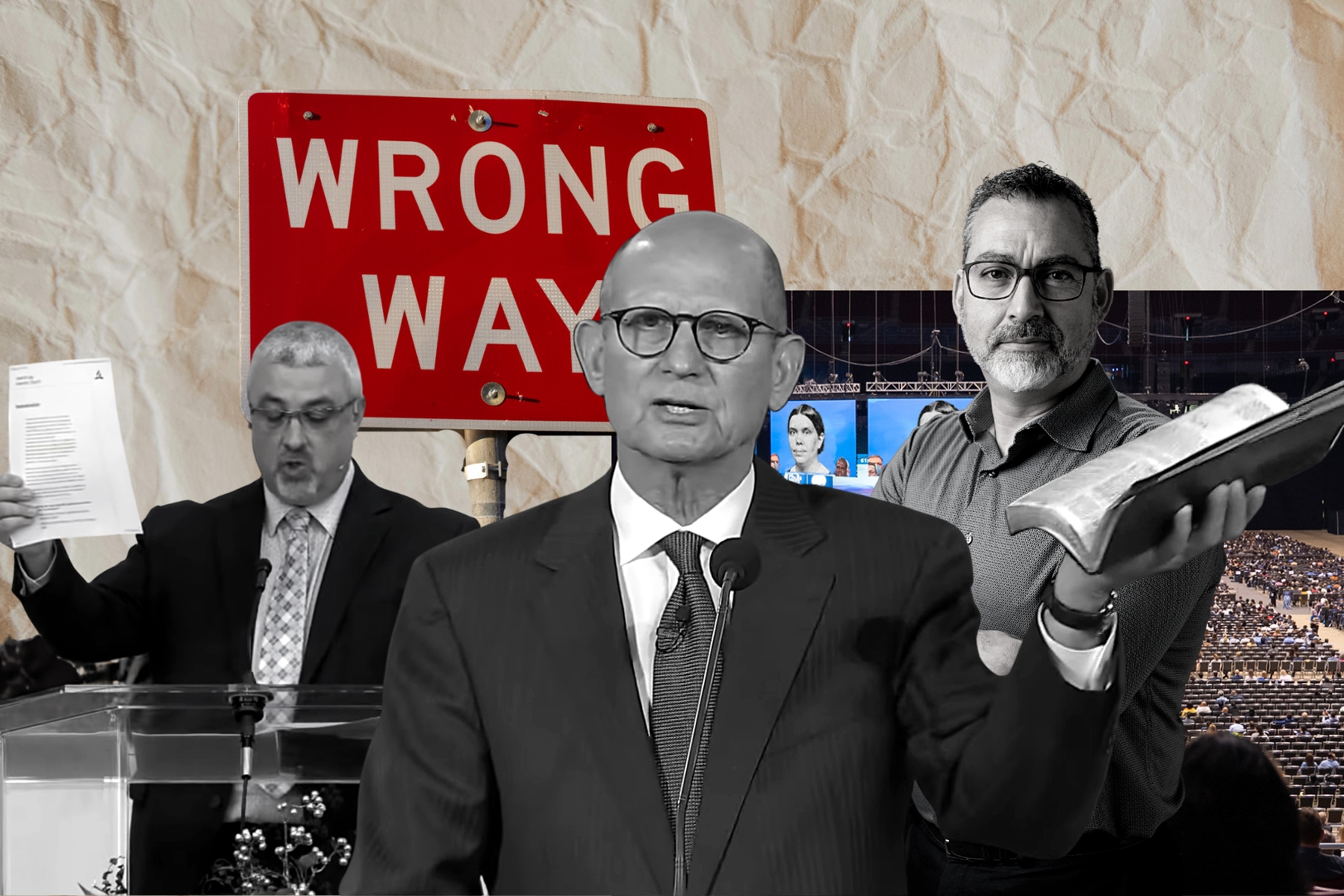 As is an annual tradition here at Spectrum when the end of the year approaches, we have gone back to compile the top stories of 2022. I always find it exciting to pull up the website metrics and see what topics most captured the attention of readers across the world.

Not surprisingly, stories having to do with the big, impactful issues of the moment often reach the most eyeballs. Viewed through that lens, it’s easy to see that some of the driving issues within Adventism this year included the 2022 General Conference Session, education, and LGBTQ topics.

Here are the top 10 most-read stories on the Spectrum website this year, interspersed with some of the other articles that didn’t quite make the top of that list but that were still notable, important, or just plain good. Adding any sort of picks is a somewhat subjective process, so I encourage you to also think back through the year or browse the archive. Did we miss a Spectrum story that you found meaningful this year? I would love to hear about it.

It’s probably fitting that this list begins with an article related to the 2022 GC Session. After being delayed for two years due to the COVID-19 pandemic—and complete with a venue change from Indianapolis to St. Louis—the session finally took place in June. The big question throughout the beginning of the year was whether Ted N. C. Wilson would seek another term as GC president. Of course, the answer was yes. In this editorial, Spectrum Executive Editor Alexander Carpenter lays out the case for why the church should move on from Wilson’s long and often divisive tenure (as historian Gil Valentine also pointed out, Wilson family members have spent 60 years in central Adventist Church leadership).

Of course, Wilson did decide to seek another (three-year) term, leaving his eventual election nearly a foregone conclusion.

While the General Conference didn’t see many big leadership changes, at the end of 2021, Bonnie Dwyer retired from Spectrum. The editor of Spectrum and director of the Adventist Forum for more than 20 years, Bonnie has nearly been synonymous with independent coverage of the Adventist Church. At her retirement celebration in January, people shared tributes to her career and leadership.

Jay Wintermeyer had spent nearly three decades working for the Adventist Church in a variety of communication roles. Then this year, an anonymous letter outed him as a gay man to leaders of the North Pacific Union Conference, where he was serving as communication director, and demanded his termination. In this account, he describes his personal journey and what LGBTQ Adventists face in both their personal and professional lives.

We were fortunate in 2022 to have the opportunity to partner with the brilliant and creative Kendra Arsenault for the inaugural season of the Imago Gei podcast, to bring the latest on queer theology and a minority perspective on faith. The are many wonderful episodes to go back and relisten to, but these two contain an interview with Alicia Johnston about her groundbreaking book The Bible and LGBTQ Adventists. Kendra’s collaboration with Spectrum on this project just reached its conclusion, but we will all be eager to follow her next creative efforts.

8. “Loma Linda University and Its LGBTQ+ Students and Faculty” by Ronald Lawson (February 2)

If it wasn’t apparent already, stories about LGBTQ issues were important to Spectrum readers this year. Perhaps no one has done more to advance understanding of LGBTQ Adventists than sociologist Ronald Lawson. In this article, he examines how Loma Linda University has treated its LGBTQ students and faculty over the years, showing a greater level of change than in many parts of Adventism.

Editor’s Pick: “Anna Knight and the Case for Reparations” by Phillip Warfield (April 8)

In another deep dive into the actions of an Adventist educational institution—this time going farther back in history—Phillip Warfield, a PhD student in history at Howard University, wrote about famed missionary Anna Knight and how she was turned away from the school that would eventually become Southern Adventist University. Along with telling the fascinating and troubling history, Warfield also made a call for how the university can still work for reparations to address past wrongs.

I wrote about the official agenda for the GC session when it was announced, which gave the first in-depth public look at what the meetings would bring. To be honest, there’s probably not a compelling reason for you to go back and read the 111-page document! But its appearance on this list shows the high interest from Adventists worldwide in the leadup to the session.

Even though the 2022 GC Session didn’t bring big-ticket issues with the same sort of import as the session prior, there were still many subplots to follow. One was to amend the Church Manual to create a “Spirit of Prophecy Writings Coordinator” position for local churches. To many, it came across as leadership trying to meddle in local affairs, and the topic was one of the most contentious votes of the entire session. Carmen Lau, Adventist Forum board chair, wrote about her concerns regarding the change, which eventually did pass.

Editor’s Pick: “The Future of Adventism in Africa” by Admiral Ncube (December 16)

Just this month, Admiral Ncube, who writes from Africa as a humanitarian and developmental professional, described what he sees for the church on his home continent. Undoubtedly, the worldwide church is too often treated as monolithic by the rest of the world. But of course, the reality is a multitude of complexities (you can hear Ncube, along with voices from other regions of the world, in the Global Adventist Conversations series released this summer).

Though COVID-19 didn’t dominate our thoughts and discourse in quite the same way as it did in 2021, the pandemic was still deeply impactful this year. In a sermon that spread rapidly online, Conrad Vine, president of Adventist Frontier Missions, took issue with the Adventist Church’s pro-vaccine stance. Tom de Bruin writing in response was the sixth most-read Spectrum article of the year.

Editor’s Pick: “Interview With an Adventist Pastor in Ukraine” by Alexander Carpenter (May 7)

If one world event defined 2022, it was the Russian invasion of Ukraine. Considering the Adventist Church’s significant presence in Ukraine, the war has also been a significant issue for the global church family.

5. “A Firing Troubles Educators, Pastors, and Donors in the Oregon Conference” by Alexander Carpenter (May 6)

The firing of a well-known education leader in the Oregon Conference caused turmoil in that region in the first part of the year. Alexander Carpenter took an extensive look at what happened, and beyond a personnel matter, the case reveals how conflicts arose surrounding a program to give additional compensation to educators beyond the denominational pay scale.

Every educational institution will likely have to deal with sexual misconduct issues at some point in time, but the nature of the allegations against the former vice president of academic affairs at Weimar University made this story stand out. I wrote about the lawsuit, which detailed graphic and disturbing conduct alleged to have been committed against an employee, along with a lack of appropriate action by the institution. I suspect the fact that Weimar has held a controversial place amid the Adventist educational landscape also likely helped propel the story up the most-read list. Court records show that the case remains ongoing at the end of the year.

Editor’s Pick: “Why Adventists Should Watch 'Under the Banner of Heaven'” by Melodie Roschman (September 7)

Under the Banner of Heaven, a show about a murder in a Mormon community and the pitfalls of fundamentalism, was released this year. Melodie Roschman, a scholar of Christian autobiography, reviewed the series, which she found to have a lot to say to an Adventist audience. “When people are bringing abuse in the church to light or asking why the church can be such a breeding ground for conspiracy theories and alarmism, it can be tempting to look away. But a church that does not reckon with its failures is a white-washed sepulcher,” she wrote. As Adventism continues to grapple with its own issues of abuse and misconduct, it can seek to learn from the experiences of other faith groups as well.

In February, I wrote about Ariadna Bates, a student at Southern Adventist University who came out as transgender and faced retaliation. The intersection between religious freedom claims and LGBTQ rights is a flashpoint throughout society in the current moment, not just for Adventist institutions. Higher education, bound by Title IX and the need for federal scholarships, is in an especially precarious place when it comes to enforcing traditional Adventist teachings about gender and sexuality. Yet too often, the impact on these students themselves goes overlooked.

Editor’s Pick: “The Utility of Diversity” by Courtney Ray (October 6).

Columnist Courtney Ray provided an salient reminder about what is at stake as we pursue greater diversity: “We miss out on ways to reach and minister to people when certain demographics aren’t represented. Without the contributions of people from different backgrounds, we are likely to overlook ways to actualize our mission effectively.”

2. “How Wilson Was Elected: A Case Study for Reform” By Alexander Carpenter (June 10)

From the moment Ted Wilson’s name emerged from the nominating committee at the GC session, the question on everyone’s mind was what happened behind the closed doors of that secretive process. Through extensive reporting, Alexander Carpenter was able to reveal that 40% of the committee opposed Wilson’s renomination and no other names were voted on.

Columns editor Rich Hannon gave a detailed response to the logic of Ted Wilson’s tone-setting sermon at the conclusion of the GC session.

And finally, the most read article on Spectrum was Alexander Carpenter’s investigation into the surprise departure of Fred Manchur as CEO of Kettering Health. Through extensive interviews with sources, Alexander was able to reveal a picture of an executive who had been followed by stories of questionable spending throughout his career. This story’s appearance at the top of this list also perhaps highlights the importance that health care continues to play within Adventism.

After a list with many difficult topics, I feel the compulsion to close with something that’s more akin to a word of hope. People sometimes ask if it’s difficult to spend so much time dealing with stories of problems, conflict, turmoil, and the like. And it can be, though I’m sure everyone on the Spectrum team would also say it’s fulfilling to work on issues that are important, issues that matter. There has to also be a time for focusing on our better angels, however, which I think this piece from Kendra Haloviak Valentine does so well, as she talks about the story of Job and appreciating sacred texts as literature.

“As we navigate our way through the crosscurrents of the numerous theological conflicts, problems about past and future, and debates about what it means to be an Adventist that trouble the waters of our community in the twenty-first century, understanding Scripture as literature—sacred, inspiring, authoritative literature—will help us avoid spiritual shipwreck.”

“What new thing is God doing in our time?” she writes. “What rebirth of images? What bringing forth of things old and new?”

I hope for us all that the close of the year brings an appreciation of what has been—alongside the anticipation of bringing forth things new.