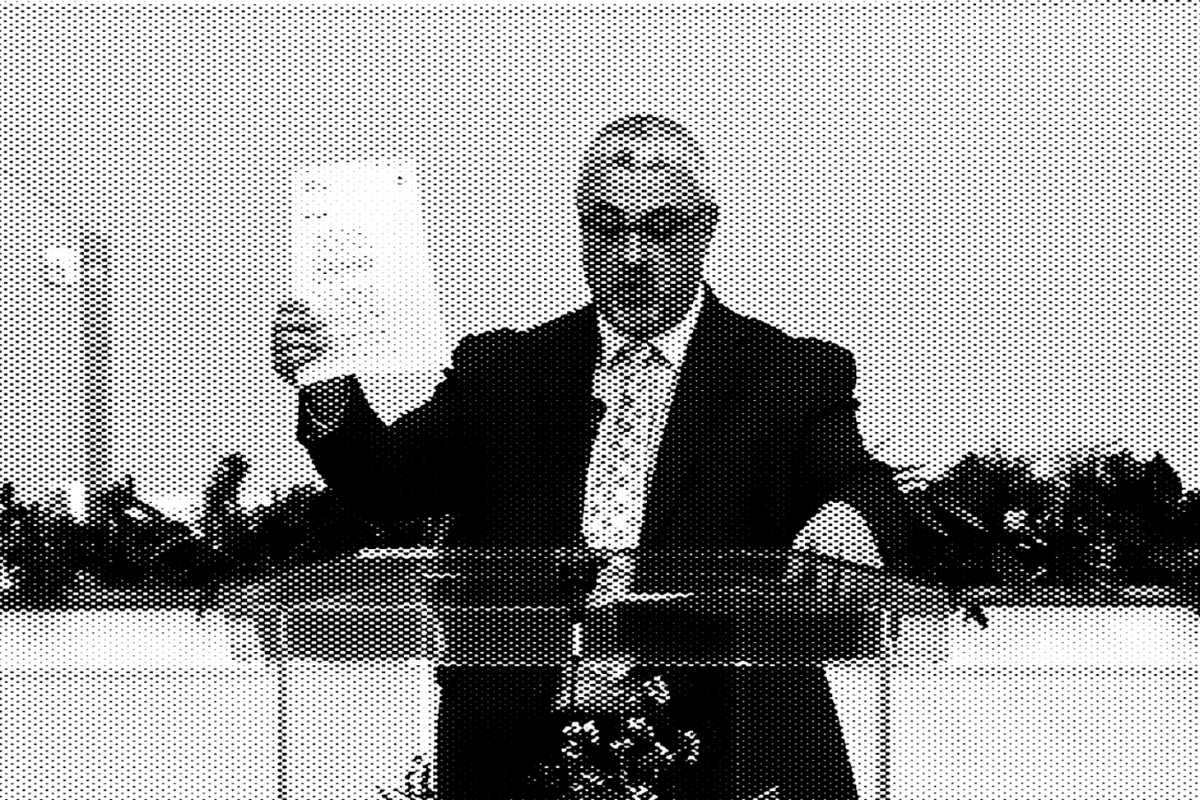 About two weeks ago, Dr. Conrad Vine stepped into Martin Luther’s shoes by delivering an hour-long address titled “An Appeal to the Adventist Nobility.” Luther’s 1520 pamphlet with a similar name was a landmark in the Reformation, attacking what he saw as corruptions of the church and abuses of its authority. Vine’s sermon similarly highlights what he sees as corruptions and abuses of authority.

It is unclear how closely Vine intends to mirror Luther’s appeal, but just as Luther pleads on behalf of the voiceless, Vine places his sermon as an appeal on behalf of others. Whereas Luther’s peasants were being oppressed by nobility, Vine’s are facing the consequences of their own decisions not to be vaccinated, including losing jobs and university enrollment. Vine takes issue with the statement made by the General Conference (GC) in 2015 on immunization and its reaffirmation of that statement from late last year. He reproduces the first completely in his sermon, the second is referred to only with selective and misleading quotations. Vine’s sermon has apparently caused some noise, as the Communication Department of the GC released an article addressing his concerns. As of this publication, the sermon has nearly 80,000 views on YouTube.

The big issue in Vine’s sermon seems to be a misunderstanding of what a religious exemption is. This naturally varies from place to place, but let us focus on the United States, as that is the context Vine is addressing. He mentions quite a few people who did not get a religious exemption, attributing the failure to the Adventists Church’s official support of vaccination. This is peculiar, as official support is not an expectation in the law. Religious exemption laws take personal belief into account, not corporate belief. How else would thousands of Catholics be getting religious exemptions when the official stance of both the Vatican and the American bishops is that vaccines are morally acceptable? This is not to deny that some dodgy employers would reject an exemption for personal belief. Yet Vine’s insistence that the General Conference should “apologize to and to make restitution to every Adventist who has lost their job” simply does not make sense.

Theologically, Vine creates a straw man argument to justify his poor opinion of the GC’s statement. He argues that taking or refusing the vaccine is a matter of conscience. I find it hard to imagine that anyone fundamentally disagrees with that statement. Yet Vine feels that the GC’s statement overrides the individual’s right to choose according to their conscience. This is quite the claim, especially as the final two sentences of the GC statement are: “We are not the conscience of the individual church member, and recognize individual choices. These are exercised by the individual.” In the reaffirmation statement, the validity of personal conscience is further emphasized: “We firmly believe that in matters of personal conviction we must be guided by the Word of God, our conscience, and informed judgment.”

It seems that Vine’s theological argument is actually one of religious liberty. Yet even there he fundamentally misrepresents what the church is saying. He selectively cites from the statements, concluding that the church is telling its members they cannot use religious liberty as a reason to refuse vaccination. This is nonsense. The statements, in a number of places, emphasize each individual’s rights. The Public Affairs and Religious Liberty Department promises to point members toward materials and resources for pursuing their rights (but will not directly undertake this personal effort for them). They will actually do even more. “The Church’s religious liberty leaders will do what they can to provide support and counsel on a personal basis, not as a Church position, even at times assisting members in writing their own personal accommodation requests to employers and others.” (In the GC’s statement responding to Vine’s sermon, they repeat this promise again.)

Despite these promises, Vine drives home his point, to much applause: “If you're not willing to stand up for the religious convictions of your members, step aside and let people stand up who will.” Certainly, the Public Affairs and Religious Liberty Department has not been doing all it could to fight vaccine mandates, and they tell us why—they feel that vaccines during a public health crisis are a good thing. Besides that, even though vaccination is a religious liberty issue, the global church does not generally get involved with each individual’s conscience. The department will stand up for core Adventist teachings that affect a large part of the church but needn’t cater to the whim of every Adventist out there. Especially when the majority of Adventists are happily vaccinated.

Vine also argues that the church’s endorsement of vaccines is driven by an ultimate dependence on federal funds that go to institutions such as schools and healthcare systems. Honestly, I don’t even know how to respond to this allegation. Surely Adventist healthcare systems are partly dependent on federal money, and surely a large part of US tithe comes from those employed in healthcare. But that does not warrant Vine’s conclusion—a conclusion so important that he repeats it twice. “When the financial needs of the institutional church for funding from the second beast of Revelation 13 cause the institutional church to effectively deny the consciences of individual members, we are crossing a red line,” he says. “We are in uncharted territory.”

Yet it is a bit difficult to take Vine’s dire warnings seriously when his own organization recently took federal funds. Adventist Frontier Missions, where Vine serves as president, received $250,000 from the US Government in 2020 as part of the Paycheck Protection Program that provided COVID-19 relief. When contacted about the payment, Adventist Frontier Missions confirmed that the organization had received the money and kept the full amount.

Vine’s key argument, and the only one that I feel holds any water against the GC’s statement, is about authority. Who in the Adventist church has the right to speak authoritatively on dogmatic issues? This is not as easy a question as it may seem. Surely, only the General Conference in Session can change the Fundamental Beliefs. But what about statements that apply the beliefs to certain situations, and what about judging whether certain interpretations fit inside those beliefs? The church does not have a clear policy on these issues, but it does have a long history in practice.

Since 1980, it has been common for the church to publish official statements—there have been around 50. The GC website explains that these articulate the Adventist understanding of certain important topics in light of the Adventist understanding of biblical values and teachings. These statements cover many topics, from reactions to the war in Congo in 2008 to abortion. Many entities are apparently able to publish official statements including the Communication Department of the GC, the GC president, the GC in Session, the GC Executive Committee, and GC Administrative Committee.

To confuse matters more, besides official statements there are also guidelines and documents—the latter of which includes the Church Manual. I know of no document or statement that outlines what the authority of these three groups of documents is, but they are all on the GC’s website under “Beliefs.” Thus, they appear to be rather authoritative, and in the lists, no distinction is made between which entity approved the document.

Vine feels strongly that the 58 members of the GC’s Administrative Committee (ADCOM) do not have the authority to speak on theological matters. Official statements are not part of the committee’s purview, he says, but belong with the larger Executive Committee, which has lay representatives and members from all divisions. That being said, since the committee’s inception in 1991, of the 49 official statements of the church, 21 were voted by ADCOM. These statements include absolutely key theological ones like Birth Control, The Holy Scriptures, and Marriage. So, while it may not be in their purview—a suggestion the GC challenges—it has been their practice for about 30 years.

I find myself in the uncomfortable position of agreeing with Vine here. I certainly agree that ADCOM should not be publishing official statements on theological issues. But for me the issue is not the size of ADCOM or the fact that all members are employees of the church; rather it’s hard for me to accept the entire concept of voting on beliefs. This became very clear to me at the 2015 General Conference Session, when all the delegates of my union voted against the changes to the Fundamental Beliefs, yet we still left the room “believing” in those changes. That seems inauthentic to me. Ultimately, I’m in agreement with Adventist pioneer John Loughborough—we should not have authoritative statements on theological issues. Is the core of Adventism not that the Bible is our only creed?

My discomfort aside, it is rather ironic to see that the conservative side of the church is now worried about the church’s statements being used against them but has never made this cry for others in the church. When the topic has been reproductive rights, identity rights, marriage rights—to name but three topics ADCOM has approved theological statements on—there was no outcry of the committee overstepping its bounds. Indeed, in general, this group has been all too happy for the church to produce statements that can be weaponized against its members, except suddenly now, when it creates discomfort for them.

Compare the statement on immunization to the much longer Considerations on Assisted Human Reproduction from 1995, one of the many produced by ADCOM that has never been challenged. This document is almost five times as long and refers to more than 20 Bible passages. More importantly, it contains far-reaching theological statements not found in any other document, like “Christians may seek medically assisted reproduction only within the bounds of the fidelity and permanence of marriage.” This is a strong and binding theological prohibition affecting large numbers of Adventists worldwide and is similarly approved by a small committee of US-based, predominantly-male church employees. Where was the appeal to “Adventist Nobility” when it passed?

I would have liked to hear from Vine whether he has an issue with all statements ADCOM has released over the years and why he has not spoken against them before. Considering how Vine misrepresents the statements of the GC in his sermon, I find it hard to give him the benefit of the doubt here. But I’d be more than willing to add my voice to (a very small part of) his appeal to Adventist administrators—please, retract all these statements, and stop producing new ones.