Why Adventists Should Watch "Under the Banner of Heaven" 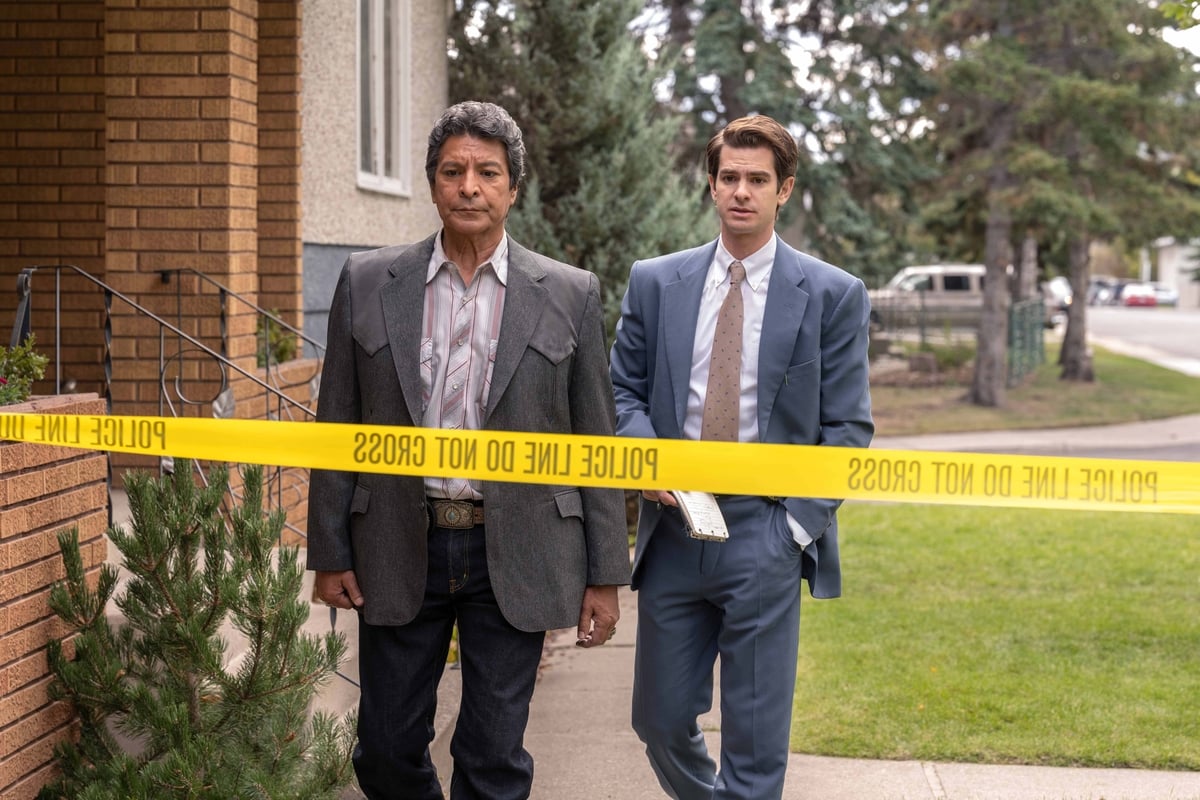 Over the last few years, I’ve grown fascinated by Mormons (or, as they prefer to be called, members of the Church of Jesus Christ of Latter-day Saints). Seventh-day Adventism and the LDS Church have a lot in common: both religions were founded in the United States in the context of the Second Great Awakening, both have prophets, and both have had complicated relationships with mainstream Protestantism in the past. As Jason Canfield, former LDS Church member turned Adventist pastor, writes in the Adventist Review, “Whether you realize it or not, Seventh-day Adventists are often confused with Mormons. At times, other Christians put us into the same category: cult.”

As a scholar of Christian autobiography, I’ve studied several memoirs by current or former LDS women and related deeply to their experiences of growing up in tight-knit communities, believing they were part of God’s chosen remnant church, and struggling to reconcile their personal beliefs and desires with their church’s expectations. On TikTok and Reddit, there are robust communities of queer and feminist LDS people deconstructing their upbringing, communities that are often harder to find online as an Adventist.

Perhaps this fascination is why I was immediately transfixed by FX’s recent true crime drama Under the Banner of Heaven (streaming on Hulu). The series, which is based on Jon Krakauer’s 2003 book of the same name, focuses on the circumstances surrounding the 1984 murder of Utah resident Brenda Lafferty, a young LDS woman, and her 15-month-old daughter Erica. The book answers the audience’s most obvious question—who killed Brenda and Erica?—immediately. Then, Krakauer focuses on the radicalization of the fundamentalist LDS murderers and the history and doctrine that led them to believe God called them to brutally murder a mother and baby. He intertwines his account of the case with lessons in LDS history—especially concerning polygamy and “blood atonement”—to make an argument that the killers’ violence and misogyny were firmly rooted in LDS history. While the book is a well-written and compelling piece of true crime writing, Krakauer’s framing has been criticized by LDS and non-LDS readers alike for his lack of nuance regarding religious belief. Under the Banner of Heaven was published only two years after 9/11, and it shows: Krakauer goes out of his way to repeatedly compare fundamentalist Mormons to Islamic extremists and often makes blanket statements about religion as a whole. In the prologue, for example, he proclaims that “faith is the very antithesis of reason” (xxiii).

FX’s TV adaptation of the book takes, I think, a more nuanced approach to the questions of religious faith raised by the case. Instead of informing the reader as to the identity of the killers outright, series creator Dustin Lance Black chose to construct the story as a mystery. At the center of this mystery is a fictional LDS police detective, Jeb Pyre (played masterfully by Andrew Garfield). While the trajectory of Pyre’s investigation is based on the events recounted in Krakauer’s book (the actual law enforcement involved in the case opted not to be represented in the show), the show gives Pyre his own conflicted faith journey.

Pyre is a devoted LDS Church member, detective, and family man. Interspersed with his investigation, we see him playing with his twin daughters, tenderly caring for his aging mother, and enjoying a loving marriage with his wife. Pyre reminds me of many of the wonderful people I have known within the Adventist Church; he is smart, sincere, kind, and genuine in his faith. He is also a product of the kind of insular religious community that many Adventists will find familiar. His boss is Mormon, as are his neighbors, most of his coworkers, and even the bus driver who picks his mother up when she wanders away from home. When Pyre has to work late because of the case, the church auxiliary committee sweeps in with cake and presents to save his daughters’ birthday party. His bishop helps prepare Pyre’s daughters for baptism and gently counsels him when he’s conflicted over how to handle his mother’s medical situation. As Nadine Smith writes for GQ, “As staunchly critical of organized religion and patriarchal hierarchy as it is, Under the Banner of Heaven shows how religion can provide a genuine bedrock in your life . . . the show truly attempts to separate the wheat from the chaff when it comes to faith, acknowledging the sense of community that spirituality can create, while also demonstrating how those same structures of community can enable conformity and repression.”

Under the Banner of Heaven is worth watching for Garfield’s performance alone. As Pyre, he imbues silences, subtle looks, and seemingly calm words with a range of fear, curiosity, anger, grief, and doubt. As he investigates the Lafferty murder, he is forced to confront the uncomfortable history of the LDS Church and begins to question his own faith. He sees the ways in which his faith is used to justify subjugation and violence against women and questions whether he wants to raise his daughters in a religion that explicitly sees women as second to men. Pyre recognizes the ways that fundamentalists thrive within the LDS Church and wonders whether the institutional church is complicit in both extreme and everyday violence. Perhaps most frustratingly, when he tries to ask questions, his bishop replies, “I don’t go digging in the past and neither should you.” He watches church authorities attempt to sweep his investigation under the rug for fear of bad publicity. And, when he does have a crisis of faith, his community turns on him, demanding that he immediately reaffirm his faithfulness or face ostracization. 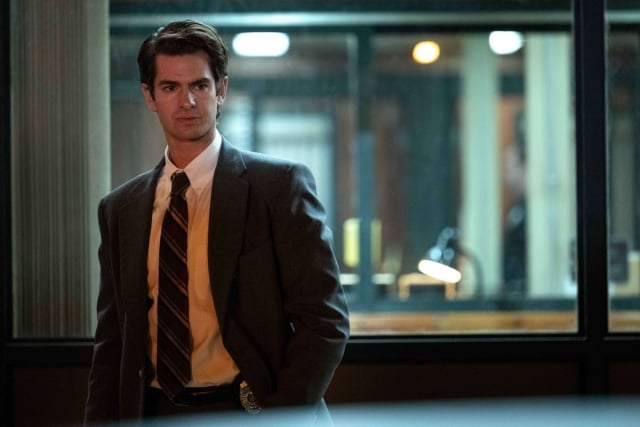 There’s a scene, close to the end of the show, where Pyre sits in his car in his garage late at night, grappling with everything he’s learned. As he reads a book about the church’s history, he breaks down weeping, and I broke down weeping with him. So often those who question or leave their faith are seen as defiant or flippant, as choosing sin and rebellion over truth and community. Pyre’s desperate sobs in this scene illuminate what really permeates the choice to leave a beloved church: grief. Grief at the potential loss of home, family, community, and certainty.

As Pyre cries in the car, his wife opens the door and climbs in next to him. “I’m struggling, honey,” he whispers to her. She responds by asking him to pray with her, but he stutters to a stop after only a few words. “I love you,” she tells him, “but I can’t struggle through this with you. I need you to do something for us. I need you to bear your testimony before our congregation. I need our girls to see and hear that their sweet father, our priesthood holder, that he still believes.” With that, Pyre’s wife bids him goodnight and leaves him alone in the car, collapsing under the weight of his doubts.

It can be tempting to see Under the Banner of Heaven as an anti-religion narrative, catering only to the ex-religious and the deconstructing. I think, however, that the show demonstrates two important principles that every current Seventh-day Adventist viewer would be wise to heed.

First, we must be honest about who we have been and who we are. We can relate to the frustration of being a historically maligned religious group, seeing our worst moments and members disgraced in popular culture and the news. When people are bringing abuse in the church to light or asking why the church can be such a breeding ground for conspiracy theories and alarmism, it can be tempting to look away. But a church that does not reckon with its failures is a white-washed sepulcher.

And second, the show calls us to deal with those who doubt, deconstruct, or even decide to leave with empathy and compassion, not fear and condemnation. Pyre’s story ends in ambiguity. He remains fiercely devoted to his wife and daughters but knows he will never be able to view his faith as simply and happily as he did before. Because Jeb Pyre is a fictional character—unlike the other major players—we cannot learn what happened to him in the years to come. What we can do, however, is ensure that the questioners in our own community feel safe to ask questions, confident that a faith worth holding is one that stands up to scrutiny.

Melodie Roschman received a PhD in English from the University of Colorado Boulder, specializing in identity, counternarrative, and community in progressive Christian women’s memoir. She is a communications officer for the University of Waterloo in Ontario, Canada.