We Didn't Start the Fire but the Tinder was Ours 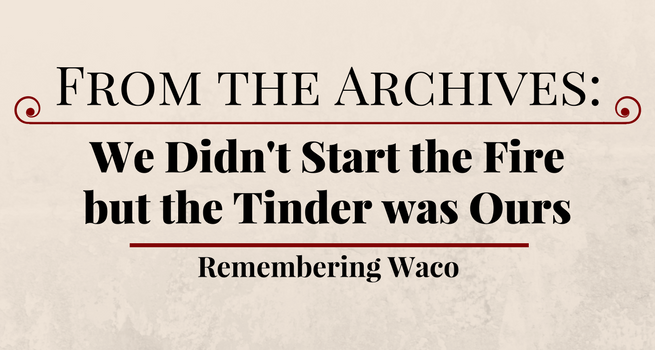 Editor’s Note: This year marks the 25th anniversary of the Waco Siege that occurred from February 28 to April 19, 1993. Throughout the coming weeks, we will be sharing on the website the articles that appeared in the May 1993 edition (vol. 23, no. 1) of Spectrum concerning this tragedy. What follows here is the editorial by Roy Branson, then editor of Spectrum:

Until their February shootout with law-enforcement officers, I had never heard of the Branch Davidians. Shepherd's Rods were familiar enough, but who were these people?

But then we began to learn more about the people who died at Ranch Apocalypse: sisters in their 20s from an Adventist family in California; a former student at Andrews University; young adults from Australia; several former ministerial students from Newbold College and their lifelong Adventist relatives; a younger brother of an active layman in Sligo church. These were not third-generation children of the Shepherd's Rods. Most estimates now say that 90 percent of those who died at Waco came directly from Seventh-day Adventist churches. This issue explores the extent to which they were us. Koresh set the flame, but we provided many of the materials.

The special section in this issue grapples with questions that will haunt Adventism for some time: How did Adventism contribute to this kind of tragedy, and what do we learn from the experience? Some Seventh-day Adventists no doubt blame immersion in the rock-and-roll culture, while others point to fundamentalist distortion of apocalyptic literature. Both are right.

What should give the greatest pause are the similarities between Koresh and Adventists—what both Koresh and Adventists feel in their bones: salvation arrives quickly, not slowly; God works most clearly in moments of crisis; the remnant's actions are the hinge of history; the majority of society will always remain hostile to the truth; loyalty to God may demand the ultimate sacrifice. Waco was the shadow side of this worldview. Other religious communities have their own darker side. Ours should not frighten us into rejecting everything we shared with Koresh. But it is our responsibility to learn also how not just our weaknesses but our strengths can be powerfully distorted. In this issue some have begun that task.

It will not be easy. During a recent visit to Battle Creek, I listened to a father talk of his son, a successful computer specialist, an active member of the Seventh-day Adventist Church until he joined Koresh in Waco, and a victim of the April 19 inferno. "If that is what religion does," the Adventist father told me, "I'm not sure I want to continue having any part of it."

Some Adventist congregations have already held memorial services; hopefully others will soon do so. Spectrum is not a congregation, but we dedicate this issue to all the families who lost relatives or friends in Waco, and to those whom they continue to remember with deep, unquenchable love.

Roy Branson was the founder of Spectrum and served as its editor for over 20 years. He passed away from complications of cardiovascular disease on July 7, 2015 at the age of 77.

Further reading on the Waco tragedy:
New TV Series Premieres for 25th Anniversary of the Waco Tragedy, January 24, 2018
Beware of Wolves Disguised as Sheep, June 8, 2017
Death of a Branch Davidian Friend and Other Memories, April 19, 2014
Branch Davidians (and Adventists) Revisited in The New Yorker, March 30, 2014
My Trip to Waco, December 27, 2012