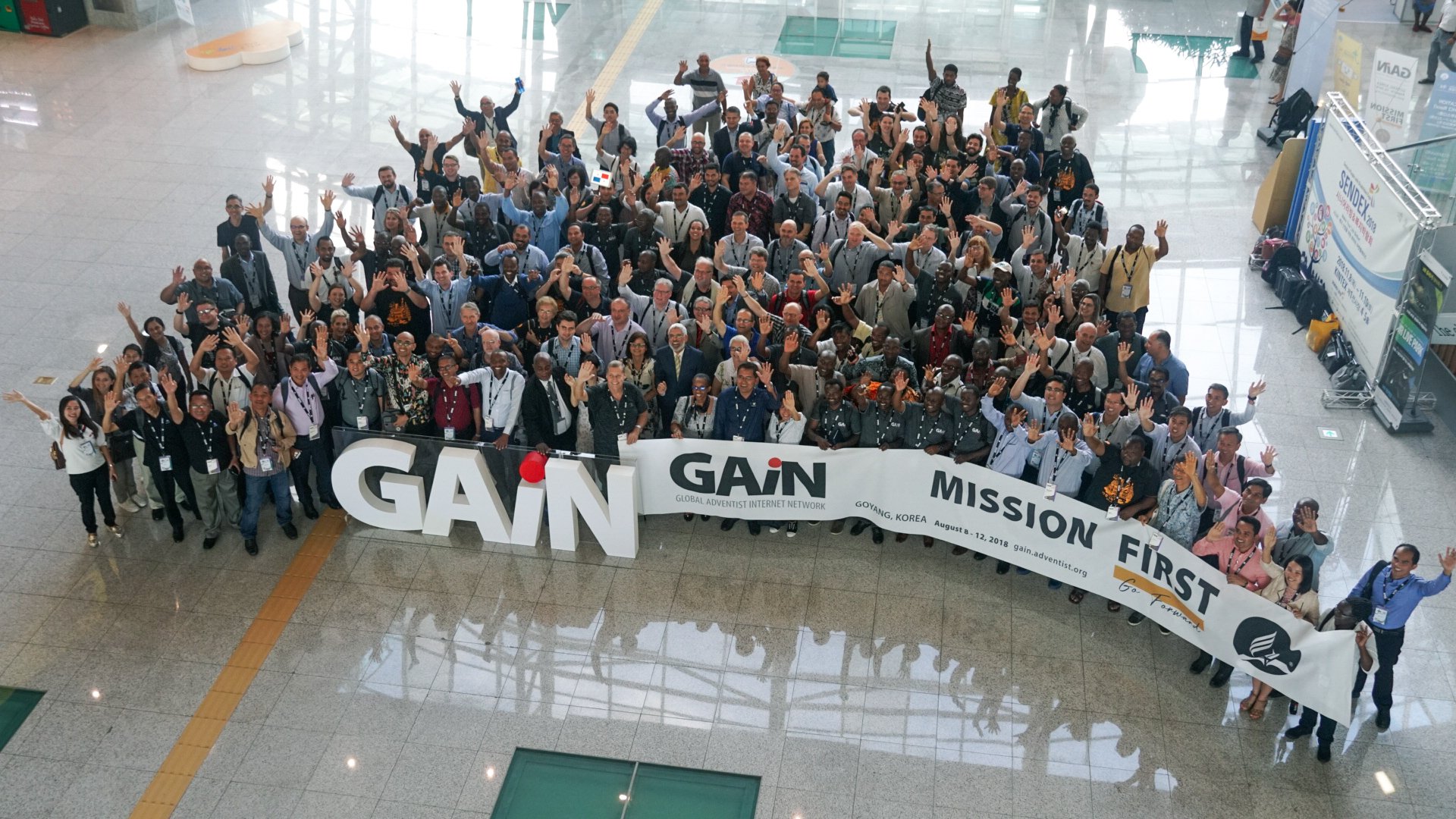 Friday, August 10, 2018, marked the third day of the GAiN conference in Korea, and the final day of dedicated GAiN presentations and programming.

GAiN conference attendees have been joining the much larger Northern Asia-Pacific Division’s International Mission Conference for morning and evening worship programs in a large hall at the Kintex Center, and on Sabbath, everyone joined together all day for special church and afternoon programs.

But on Friday, GAiN attendees continued to meet in a seminar room upstairs, where we heard more presentations about branding, media ministry, app building, and event planning from communicators around the world. GC President Ted Wilson spoke to us, and presented this year’s netAwards.

The morning began with a presentation from Stimme der Hoffnung in Germany. We were given a short history of Stimme der Hoffnung and how its branding and logos have changed over the decades. The organization began printing pamphlets at the end of World War II, in 1948, and soon began producing radio shows, broadcast via Radio Luxembourg. The radio shows and pamphlets led people to a Bible correspondence school. In 1964, these offerings were supplemented by an audio library for blind people. In 1972, Stimme der Hoffnung designed its first official logo, and became an official institution of the Adventist church. Its branding and logo went through several redesigns in the 2000s, as more branches were added, including Hope Channel broadcasting. All of the different offerings are now under the Hope umbrella, with the Hope Bible Study Institute, Hope Seminars, and Hope Teen Camp (in order to attend you have to bring a non-Adventist friend). Two Hope Centers have also opened as a physical presence for their communities, and soon a brand new Hope Center building will open, housing the conference, a church, offices, a cafe and more. People in Germany know the Hope brand, so by branding all of its 10 different offerings with “Hope,” the church gives the public something it already trusts. Stimme der Hoffnung, now with all of its Hope brands, has been a pioneer of media ministry in Europe and with its brand convergence, it can continue to provide trusted services to its communities and reach more people besides.

The next presentation was from the CEO of the Hope Media Center in the Ukraine, which continues to find success with its many projects. The Hope Media Center employs 145 people. DeepVision is a research & development arm, which is developing many different media products, including DV Connect, DV Media Library, and DV Sabbath School.

DV Connect is a new digital path that takes the user in the social network to becoming a disciple of Jesus. The platform has all kinds of pieces, including a course creator so people can easily create online Bible study courses for others to share. It has a mentor program, so that anyone can sign up to be a mentor for someone studying the Bible. It has a platform for games, so that Bible study can be like playing a video game. It has a chat bot that users can interact with, which will help them find information and videos they are interested in, helping them delve deeper into specific topics. It makes everything simple and easy to share.

Adventist World Radio in Zambia gave us the next presentation, with a video showing the impact of the AWR ministry in Zambia. In the AWR’s TMI (Total Membership Involvement) 2018 campaign, with the radio promoting a series of 1,000 simultaneous evangelistic meetings across Lusaka, there were 17,000 people baptized in two weeks.

Hearly Mayr, ADRA’s marketing director, described the recent relaunch of ADRA Connections Extreme, a program that brings together students from multiple universities for large-scale, short-term mission projects in extreme environments, with extreme living conditions. This summer, students from Adventist universities in the US and Brazil traveled on a boat to a remote part of the Amazon to build a school. This program builds communities of young people across the world, helping them to see the relevance of their church, and inspiring them for mission.

ADRA is increasing its social media activity to promote its mission programs among students, and produced a short virtual reality film that it took to university campuses to help students see what the experience would be like.

Artventist.com is a new platform to connect media professionals and communicators. Manuel Wildermann of the Adventist European Media Center in Germany, and Daryl Gungadoo, media lab director for the Adventist Review, have teamed up to create this new platform as an Adventist version of fiverr. Like Uber has done for taxis, and Airbnb has done for accommodation, Artventist can help people find support for media projects. So a communicator might need help with a specific media campaign. Using Artventist, he can find an Adventist graphic designer, copy writer, or project manager to help. There are so many cool technologies being developed out there that Adventist projects could be taking advantage of. Gungadoo has been working on augmented reality and creating amazing 3D images for Kids View, the Review’s magazine for children. So, for instance, readers of the magazine can point a phone at a picture of Nebuchadnezzar’s statue and see a tall, 3D version rise from the page. 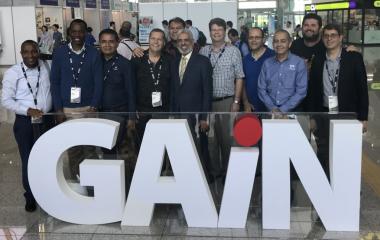 Communications directors from divisions around the world.

The Southern Africa India Ocean Division, one of the church’s fastest-growing divisions, is finding new ways to reach young people. It has created a popular game show that kids watch online and on TV. Last week, the church’s SID Media Productions in South Africa just completed filming a 30-minute movie aimed at young people. We were shown a trailer of the dramatic and very professional-looking film. I hope to see the whole movie when editing and production is completed.

The South American Division has created a program called 7me, to give members and churches more control of membership details. So, for instance, church members can use the online program to request a transfer to another church, pay their tithes and offerings, and connect to church events. They are also working on creating an augmented reality Bible. So in Revelation, for instance, you can see a graphic 3D image of the beast, doing its thing on the top of the Bible.

A father and daughter team talked about the manga comics project they are spearheading, using a popular art form to share traditional Bible stories.

The attendees at the GAiN conference have been fascinated and impressed by the Northern Asia-Pacific Division’s International Mission Congress, happening simultaneously in Seoul’s Kintex Center. The multimedia production has been top-notch, with synchronized sound, lighting, video and more all enhancing the services and programs in the large 4,000-seat hall. The production booth at the back of the hall has more than a dozen computer screens, mixing equipment, and somewhere around 10 people moving around at any one time. So we were very interested to hear a talk by the designer of the mission congress stage, who has been working on putting it together for more than a year. He did significant research on other large events to get ideas. He spoke in Korean, with a translator. He said he wanted a 360-degree screen experience, but that turned out to be too expensive, so he settled for the long, panoramic screen that fills the front of the hall instead, which cost $200,000. He showed us a detailed miniature model of the stage, with a glue and ruler, which he said were important tools in his arsenal.

And finally, the GAiN conference ended with the presentation of two netAwards.

The Adventist netAward was established in 2008 by the GC’s communication department, and recognizes meritorious contribution to the church’s online ministry through the internet and related technology. The Award recognizes individual and group involvement in creative online mission outreach of the church and its public impact.

Nominations for the Adventist netAward are evaluated by a group of Adventist communication and IT professionals.

General Conference president Ted Wilson presented the awards, after saying how much he appreciated the important work of the church’s communicators — represented by the many people here at the GAiN conference — in using media to spread the gospel. 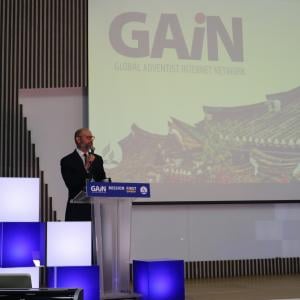 The first 2018 netAward was given to Roberto Roberti, the Brazilian who spoke on the first day of the conference about his work interacting with thousands on the South American Division’s Facebook page.

Neville Neveling from Namibia was recipient of the other netAward, for his work in using WhatsApp and other social media platforms to send short sermons and other evangelistic content to many thousands of people, and helping many other Adventists around the world to use his system. 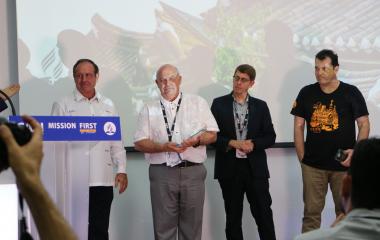 The GAiN participants then gathered for a photo, before heading off for dinner and the evening program with the Mission Congress.

I spoke to more attendees from Fiji, Singapore, Ghana, South Africa, and the Ukraine (all either church communication directors or church finance directors at different levels, or Hope Channel employees, following my previous conversations already reported on) who all asserted that they had been inspired by and learned from the conference. They also all said how wonderful it was to have the opportunity to be a part of the International Mission Congress as well, and see a really professionally-produced large-scale church event in action.

Once again, nearly everyone who spoke from the front on the last day, to the largely male audience, was a man. When I lamented this to the conference organizers, they said they had noticed, and hoped to do better.

After a full Sabbath day program with the Mission Congress, GAiN conference attendees were taken on a trip to the Demilitarized Zone, or DMZ — the border with North Korea — on Sunday.

Participants are looking forward to the next GAiN conference, scheduled for only six months from now, in Jordan.

Alita Byrd is attending GAiN and reporting for Spectrum from the conference in Seoul, South Korea. Read her Day 1 report here, Day 2 report here, and her report on the Mission Congress here.