GAiN conference, the annual meeting of the Global Adventist Internet Network, began today in Seoul, South Korea. About 250 people from 39 countries who work in media, communications, and technology are attending presentations by members of the General Conference communications department as well as outside professionals on the top floor of the massive Kintex Convention Center in Goyang.

Attendees arrived Sunday and Monday from all over the world (many from time zones eight, 10, and 12 hours behind Seoul), were picked up from Seoul’s Incheon Airport, and bused to two hotels. Travelling the eight-lane highways through a sea of modern high-rise apartment buildings and across long white bridges felt like driving in a sci-fi video game, with the onboard navigation system talking incessantly all the way. Early this morning, we boarded buses again to take us to the convention center in Goyang.

The long line snaked out the door on the convention center’s top floor, as attendees all had to register upon arrival. We were all given a GAiN t-shirt and a logoed set of chopsticks. There was no printed program. So we all had to listen to hear what came next!

The program today was about internet evangelism, defined as: "How to find people, establish relationships, and take them to baptism," according to Williams Costa, Jr., director of the General Conference communications department.

The big keywords of the day included “branding,” “funnel marketing,” “call to action,” “digital marketing,” and “search engine optimization.” Presentations were broad and abstract, rather than prescriptive and practical.

Speakers were mostly members of the GC’s communications department — which also organized the conference — and others inside the GC building. The only exception to the insiders was Kurt Kennedy, founder and CEO of Kennedy Global, described as a “leading internal-external brand alignment agency.” Kennedy, a graduate of Walla Walla University, has worked with Nike, Starbucks, Adobe, Unilever, and other big brands.

Kennedy’s talk opened the conference, and focused on “igniting your brand promise.” Since Kennedy is a business strategist, his PowerPoint mentioned “companies,” “clients," and “business results,” but he urged listeners to translate the business jargon into terms that suited their own purposes.

Kennedy discussed the difference between context and content. Brands provide the context — like a shortcut for customers, so that they can more easily make their way through all of the clutter and pay attention to the content you want them to receive. The power of a brand helps give a company its value.

Sam Neves: delivering the promise of the Adventist brand

Following Kennedy’s presentation, Sam Neves, the GC communication department’s associate director for internet and social media, talked about how important it is for our church to deliver on our brand promise. Will you buy a third Samsung phone if the first two disappoint you? No, you will choose a new brand. Likewise, people who are disappointed by our church simply leave. And it’s not easy to have a promise that all of us deliver on.

Later in the afternoon, web manager for the GC communications department and conference organizer Brent Hardinge, gave a longer presentation about the Adventist identity project update. He showed us different versions of the Adventist logo and church signs and email signatures. He showed us the latest version of the Adventist Living Pattern System, a collected set of Adventist brand designs available for churches and church entities around the world to use. (Hardinge showed us the last version at the GAiN conference last year.) He showed us the design principles in the latest website redesign, and how much more flexible and variable it is. He talked about about how the church is working to ensure there are more Call to Action buttons and places for any site visitors to take the next step, whether it is signing up for a Bible study, or asking for help finding a local church.

Search engine optimization is of course an important part of making yourself visible online, and Sharpe gave a broad overview of its history on Google and its possible future.

Sharpe introduced us to “Pastor Google,” who he described as the most popular pastor in the entire world, who is believed by most people before anyone else, and who freely uses non-Adventist sources to describe Adventist doctrine. [Perhaps Sharpe was referring to this thoughtful examination of Adventist beliefs by a site called Catholic Answers.]

He said that we need to do all we can to take control of our own story.

He said the most current Google algorithms look for topics (rather than keywords), and rich, in-depth pages that provide lots of content. Voice search continues to evolve, more traffic is being cannibalized by search engine results pages (answers are found right on the search page, so users don’t even have to click into a website) and mobile responsiveness is ever more important.

Sharpe didn’t get into very specific detailed advice about what web managers should do — his was a fairly broad brush strokes approach. After Sharpe’s first presentation, four Adventist media professionals took to the platform, representing Adventist World Radio, ADRA, GC Publishing and the Adventist Review. Each spoke for a minute or two about how they are going to be working more closely together, sending listeners and readers to each other’s platforms for more content and greater engagement.

This marked the only time during the day’s presentations when two women spoke to the group, and both were very brief. All of the rest of the speakers today were men. Communications director for Adventist World Radio Shelley Nolan Freesland and associate director for communications at ADRA Ashley Eisele were, in fact, part of only a small minority of women attending the GAiN conference. In my approximate counting of attendees this morning, it seemed only about 15% were women, and anecdotally, I heard that many of those are wives attending with their husband participants.

Sharpe’s second presentation introduced attendees to the concept of copywriting, which he defined as leading people from content they see to pressing a button and taking an action. He said that copywriting is not an art, but a science. Just follow the proven process to get measurable results.

In Sharpe’s opinion, the Adventist church is pretty good at journalism (factually informing the reader), but less good at persuasion, or copywriting. He believes copywriting will improve the effectiveness of any outreach project. He said that measuring results will teach you how to lead people to action. He says that is the only way to find out how people will react. As an example, Sharpe told us: “I have seen a headline with a misspelled word get better results than a correctly spelled headline.” [Is this really the moral he wants to give?]

Sharpe talked about the power of telling the story, and following a hero’s journey. He said that nearly every story, every book or movie, follows the same formula: hero has a problem, meets a guy with a plan, hero follows the plan and experiences a transformation that helps the hero to avoid failure. 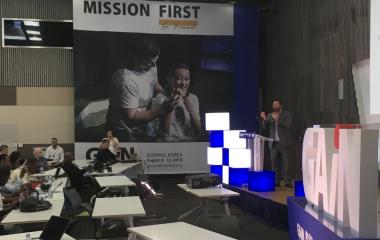 Roberto Roberti, a Brazilian police officer who became an Adventist in 2010, talked about his work responding to thousands of commenters on the South American Division’s Facebook page. He shared some of the specific cries for help through Facebook from people battling depression, the death of loves ones, suicidal thoughts, and more. He said more than 200 people have been baptised as a result of the Facebook ministry in South America, and right now 3,159 people are studying the Bible after initial contact was made with the church through Facebook.

Neville Neveling from Namibia next spoke about using WhatsApp and other social media platforms to reach people. He said that after the floods in Japan that began in June, 14,000 Japanese people asked to receive Bible studies on their cellphones. He talked about how digital church can include many of the things we are used to in our traditional church culture. Neveling said that even in a place where evangelism doesn’t seem to work, digital evangelism can make significant inroads.

Kyle Allen, vice president of Adventist World Radio, said that AWR has not been very responsive to the thousands of people who call and write after hearing one of its programs. He proposes that centers for digital evangelism be established so that any comments from people can be responded to within minutes in multiple languages. A broadcast (or podcast, etc.) leads to engagement, which leads to prayer and Bible study, which leads to a local church, which leads to baptism. Allen asserted that connecting the dots is important, and he urged anyone who wants to start a center for digital evangelism in their area to talk to him about it.

Italo Osario of the General Conference then introduced Vividfaith, a virtual community that matches up volunteers with opportunities around the world. While the new site was announced last October 2017, and is live now, it will not be finished and officially launched for another few months. The site is open for anyone who wants to do ministry with the Adventist church.

In contradiction to Sam Neves’ assertion that all of our media should be very upfront in saying it is Adventist, Vividfaith doesn’t include any details about its creators. Osario says that is deliberate, as the site is not exclusively for Adventists.

Today’s GAiN program ended just before 5pm, and conference-goers were invited to a buffet dinner in one of the large halls downstairs, followed by the Opening Ceremony for the 2018 Northern Asia-Pacific Division International Mission Congress. More on that tomorrow!

Alita Byrd is attending GAiN and reporting for Spectrum from the conference in Seoul, South Korea. Photo credits: Alita Byrd.