The 2018 Northern Asia-Pacific Division International Mission Congress — being called a mini GC — has opened in Goyang, South Korea. Take a look at some of the sights.

The opening ceremony for the 2018 Northern Asia-Pacific International Mission Congress on Wednesday, August 8, was filled with color, music, lights, and language.

The evening program brought 4,000 people from the five countries of the division into a large hall of the Kintex Convention Center in Seoul, South Korea, and began with music from a wonderful singing group of young people.

A long stage in the front of the hall was backed by a huge panoramic screen, and two large side screens that enlarged the action for all the attendees and flashed translations in five different languages. 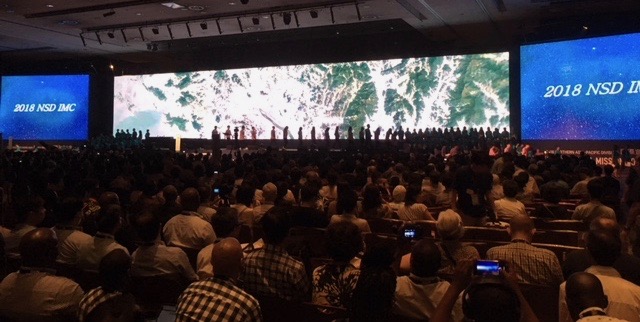 When the choir filed off, the screens were filled with a dramatic backdrop for a multimedia show with singing, spoken words, interpretive dance, and traditional instruments. The short mini-musical told the story of Abram LaRue, an “old white man” credited with first bringing the Adventist message to the Asia Pacific. In 1888 he was told that he did not have the credentials to be sent as a missionary, so he funded himself and at age 66 found a ship that took him to Hong Kong. The beginning of the Adventist work in China, Japan, and Korea can all be traced back to the work of Abram LaRue. 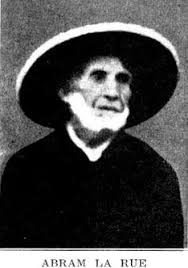 The music and stories were all linked to the theme of the mission congress: “Go forward.”

A drumline of young people wearing traditional dress accompanied a short video introducing the countries of the Northern Asia-Pacific Division: Mongolia, Korea, China, Japan, and Taiwan. The people in these countries comprise a quarter of the world’s population.

The Chunsung Pathfinder Club — with drums, full uniform, and perfect precision — marched into the back of the hall and around the aisles.

After all this, two women stepped to a podium to welcome the crowd in multiple languages. It felt a little bit like a mini-Eurovision Song Contest, with the two hosts reading a carefully-crafted script, the multilingualism, the colorful costumes, and the booming music. Many have described the NSD International Mission Congress as a miniature General Conference Session.

Just as at the GC Session, people of the represented nations — many wearing traditional dress — marched in behind flags, led by a delegation from the General Conference. Each union president offered a brief welcome, and some statistics for each conference were read out as the members marched up on the stage.

The formal declaration opening the conference was then accompanied by swelling music, smoke machines, and virtual fireworks on the panoramic screen.

Representatives from each part of the division took a pledge, and more welcome messages were offered from the division president, the Korean Union Conference president, and a recorded video message from GC president Ted Wilson. GT Ng sermon: Where are you?

The evening’s sermon was given by GC vice president GT Ng, beginning with his trademark joke: this time about a suspicious wife checking up on her errant husband. The line he left us with was: “Where are you?”

Adam and Eve hid from God, and he asked: “Where are you?”

God searches for us because he is a missionary God, Ng said. He is on a mission to search and rescue the lost.

Ng then gave a detailed telling of the story of the boys recently lost in the cave in Thailand, which captured the attention of the world, as rescuers worked to rescue them under extremely difficult circumstances. He included drawings and graphs and statistics and photographs.

Finally, Ng listed seven lessons from the cave rescue that we can apply to our church. Some of those lessons include: there has been a plan of redemption since the beginning, God sent the best, and the final rescue of the saints will be dramatic and miraculous.

The boys in Thailand waited two weeks for rescue. Jesus has been waiting for more than 2,000 years, Ng said. There are now 20 million Adventists around the world, with just one mission. The search and rescue mission will continue until Jesus comes.

This morning, Thursday, the International Mission Congress continued with more praise music from the singing group The Golden Angels, including the theme song “Go Forward,” sung in Korean, Japanese, and English. The group has been performing since 2004, and is constantly changing as singers “graduate” after their year of voluntary musical service, and others take their places. They have recorded at least 13 CDs, and DVDs, too.

The core group is four men and four women, but many alumni and others have joined the group for this mission congress. The Golden Angels are mostly Koreans, but include some Taiwanese, Filipinos, and Mongolians. Auditions for next year are in September.

The song service and prayer were followed by an acapello trio. All of the music is of such high quality.

The morning sermon was delivered by Duane McKey, president of Adventist World Radio. McKey is a strong proponent of the TMI, or Total Member Involvement, program, and that was what his message focused on. He told a story of a bungee jumper whose rope broke, and then wondered aloud why young people do things like that? He went on to suggest that instead, you should do something exciting for Jesus. He described 50 Japanese Adventists who traveled to the Philippines and presented an evangelistic series not in their mother tongue, but in English. He told us that at that very moment, 50 Chinese youth were also on their way to preach in Manila.

McKey said that isolated efforts are not so successful — but once we connect the dots, we will see baptisms. To that end, a Center for Digital Evangelism is being started in the Philippines, which will help in responding to anyone looking for more information. He suggested that churches should align their calendars for the entire year, with all groups (family ministries, health seminars, prayer meetings, etc) working together and building synergy.

McKey went on to share slides of further success stories, including one about a group of Communist rebels in remote Filipino mountain villages who want to be baptized as a result of Adventist World Radio broadcasts. He mentioned 870 prisoners in one prison in Zambia who have become Adventists. (He was careful to clarify that they converted after their incarceration.) He talked about a baptism of 17,968 souls after a thousand evangelistic meetings were held around Lusaka simultaneously. He talked about an Afrikaans woman in Pretoria who appeared at church asking to be baptised after someone sent her sermons on an app. And finally, he told about an American who unwillingly went to preach in Kenya, only to discover that his message was eagerly accepted by an old woman who had dreamed 50 years earlier about the voice of an American that would speak truth.

The morning meetings of the NSD congress continued with stories of missionaries from many places working in many different fields. Afternoon seminars scattered participants to smaller rooms all over the Kintex center. There were seminars on “building bridges with your Muslim friends,” “urban ministry,” and “how to make public evangelistic meetings more effective.” There was also a simultaneous Medical Missionaries Conference, and a field trip to the missionary cemetery in Yanghwajin where foreign missionaries who served in Korea are buried. Children’s programs were organized in another part of the Kintex center, and 80 booths displayed information from universities to hospitals to food items to mission projects around the floor of the convention center. Lunch and dinner were both served again buffet-style in an adjoining large hall that could seat thousands at hundreds of circular tables. It was a good chance for conference-goers to catch up with old friends and make new ones.

I met Enkhee, Lee Sung Hee, Annylee, and Gilbert. The two Koreans, Lee Sung Hee and Gilbert, had served as missionaries with the Division’s Pioneer Mission Movement in Mongolia. Enkhee, who is from Mongolia, is now working as a missionary in Korea! And Annylee from Mongolia hopes to travel as a missionary to Turkey. So they all felt they had so much in common and had real understanding for each other.

Mark Finley was the speaker at the evening meeting, which again featured wonderful music. Finley said that neither scholarship nor intellectualism, nor formalistic Adventism lacking in spirit will change the world — Jesus Christ himself the living God will change the world.

I was wondering why the featured speakers are all General Conference administrators (all older men, and mostly older white men, who all speak in English) instead of people from the Northern Asia-Pacific Division. But I am sure there are a multitude of things I do not understand — layers and layers of culture and politics and relationships and precedence — so I am in no way qualified to comment on this seemingly missed opportunity. The NSD International Mission Congress is so well organized, so beautifully choreographed, from beginning to end, with energy and spirit from the local organizers, particularly the Koreans, that everyone feels uplifted. Again and again I heard attendees of the infinitely smaller GAiN conference say that they had had no idea of the scale of the mission congress we are participating in on the periphery and how impressed they are by its professionalism. From the smiling greeting when attendees disembark their buses in the morning to the translation services and multimedia presentations, the GAiN attendees feel immeasurably blessed to also be part of this much bigger experience.

Alita Byrd is attending GAiN and reporting for Spectrum from the conference in Seoul, South Korea. Read her Day 1 report here.