The Danger of Dobbs 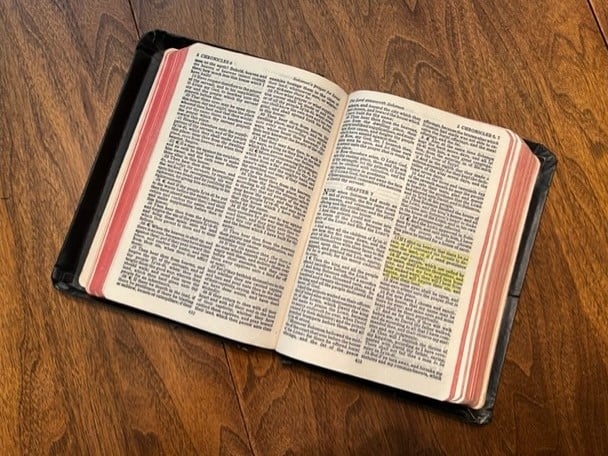 In my travels on social media this week, I ran into a post quoting 2 Chronicles 7:13–14. “Whenever I hold back the rain or send locusts to eat up the crops or send an epidemic on my people, if they pray to me and repent and turn away from the evil they have been doing, then I will hear them in heaven, forgive their sins, and make their land prosperous again.”[1] Scrawled onto the picture of the Bible open to that text were the words, “Pay attention children.” While I’m sure the direct connection was a reference to the pandemic (after all, the word epidemic is in the quotation), the quote reminded me of those conservative evangelicals celebrating the Supreme Court’s decision in Dobbs, et al. v. Jackson Women’s Health Organization et al. last month.[2] The Dobbs decision was the culmination of several decades of political activism by conservative evangelicals, based on their questionable religious belief that life begins at conception.[3] I heard 2 Chronicles 7:14 cited to me many times over the years as biblical justification for outlawing abortion. Abortion has been “the evil [we] have been doing” that we must “turn away from” for God to “make our land prosperous again.” The argument is clear, as far as many conservative evangelicals in this nation are concerned: America is a Christian nation, the murder of fetuses violates God’s law, God will judge us for legalizing this practice, and therefore to be in right standing with God, we should outlaw abortion. This seems straightforward, but it raises at least two questions. One, is this an accurate reading of the text? Two, is the Dobbs decision and the subsequent outlawing of abortion in the states that rely on Dobbs the right way to accomplish these ends?

In short, there seem to be some insurmountable flaws in the way 2 Chronicles 7:14 is analyzed and interpreted by conservative evangelicals. To assume that this verse applies to this nation at this time is to ignore biblical and historical context. And the argument rests on the belief that America is a Christian nation in the same vein as Israel was in the biblical record. Except there is no evidence, either direct or implicit, that America holds such a place. There is no evidence of a covenant between God and America. And of course, Adventist eschatology says quite the opposite about the role America will play in the future. If that relationship does not exist, then the promise of the verse does not apply, and the impetus for action against a practice like abortion goes away.

But even if we were to concede the argument that Christians in America are under some holy directive to end the practice of abortion here, we can still raise the question of whether outlawing the practice legislatively is the right way to accomplish the goal. In the debate over whether the ends justify the means, I see God as a both/and deity. God not only cares about whether we have the right goals but is also concerned about the way we achieve those ends. The problem that conservative evangelical Christians have in this instance is that abortion is such a complicated issue. Abortion forces us to wrestle with what is essentially an unknowable question—when does a fetus become a person, such that to terminate a pregnancy is an act of murder? No one knows the answer to that question. Any knowledge we presume to have stems from what we believe, religious or otherwise. There are varying opinions on this question, even among religions that cite the same texts. But if there isn’t unanimity among our faiths, how can we demand it of any other social group? Considering the diversity of reasonable beliefs, our means become even more important. Religious liberty would suggest that the same freedom that allows anyone to have a spiritually or religiously based belief about the beginning of personhood should make room for others to have their own beliefs as well, not just beliefs that align with our own.[4]

There are many things that are dangerous about the Dobbs decision.[5] But I think it behooves Christians to not be so celebratory about stripping away God-given freedoms from others that they themselves continue to enjoy. This just may be the evil that God will actually judge us for accepting.

[2] It probably goes without saying that the decision, rendered by the Supreme Court last month, overturned the precedents of Roe v. Wade and Casey v. Planned Parenthood, which gave pregnant people the constitutional right to terminate their pregnancy within a certain timeframe.

[3] I label the belief as questionable because it is a well-known historical fact that conservative evangelicals, prior to (and even for some time after) the Roe decision, were ambivalent on the question of abortion. They only made it their political centerpiece because their real political concern—a defense of racial segregation in their schools and colleges—would, in all likelihood, not motivate their voting base.

[4] It should also be noted that to rely on the sword of the state is to, at some level, express a distrust of the Holy Spirit’s power to convict people of right behavior and of God’s power to enable people to make right decisions.

[5] To consign pregnant people’s bodies over to the state and the parade of horribles that naturally follows from that is just the beginning. Furthermore, the legal rationale the court used to justify this decision imperils the rights of several other groups in society, despite the protests of the majority itself.