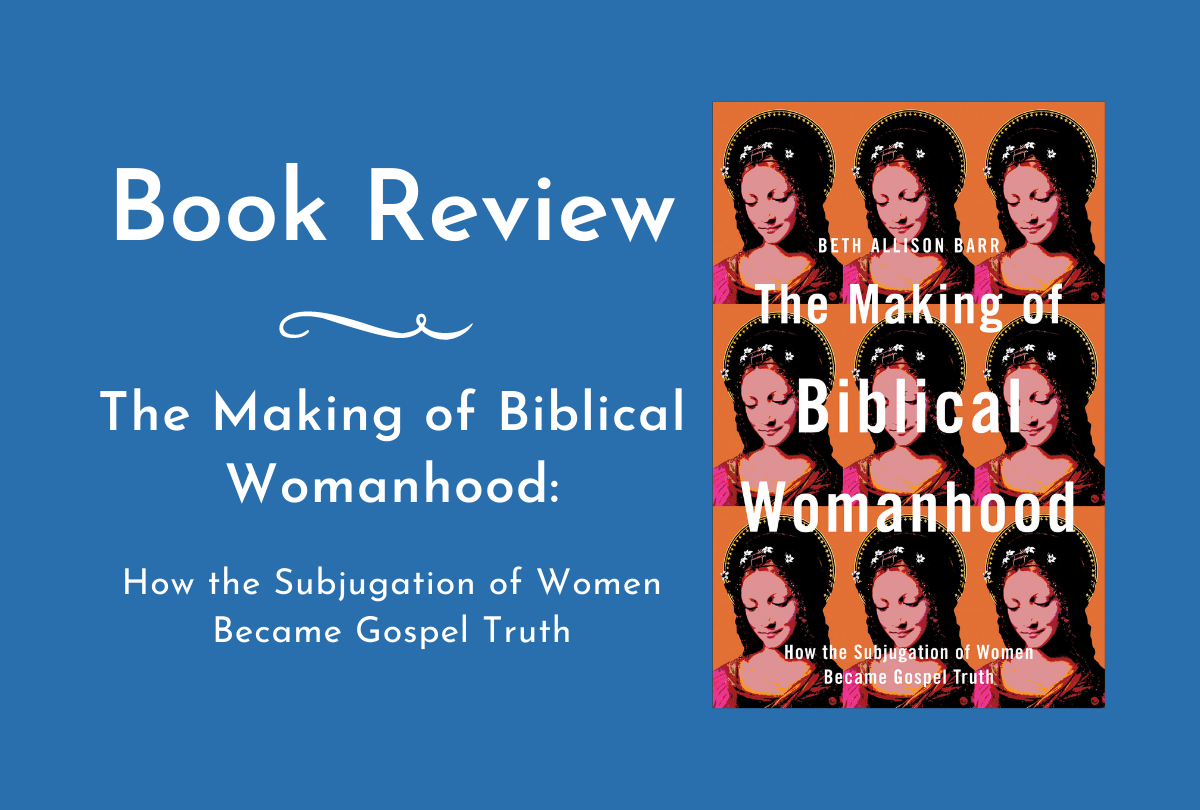 Is Biblical Womahood Really a Conversation About Culture?

Situating Barr’s work in the midst of other efforts on the concept of biblical living, I think of Rachel Held Evans’ A Year of Biblical Womanhood, which conveyed the absurdity and futility of living in the 21st century as a woman who follows a wooden interpretation of the Bible. Before that, AJ Jacobs, editor of Esquire, published The Year of Living Biblically: One Man's Humble Quest to follow the Bible as Literally as Possible. Hermeneutics (how to interpret a text) has become key for the identities of many faith groups. I would suggest that the use of hermeneutics has been infected with culture, and more recently the political lens of the “left” or “right,” which are relatively new worldviews.

Last month’s Friday Forum book selection, Jesus and John Wayne by Kristin Kobes Du Mez, examined the roles and crafted identities of men in American Christianity and how this impacts all who journey as kingdom people.

Biblical womanhood implies a distinctive identity against something else: non-biblical womanhood. Identity is a key term in anthropology but it is also a contested one, dealing with the question of who we are in relation to others. It relates, on the one hand, to categories of the individual or sameness with oneself and, on the other, to collective distinctions of otherness.

Within Christianity, the futile quest continues to define and package a Christian identity as though it could be sold and mass produced. Crafting an identity against “secular culture” has become a feature of Christianity. Yet, is that what Jesus intended when he cast a vision for how his followers should live? Didn’t he champion the phrase “you have heard, but I say…?”

This reminds me of a book on organizational psychology, Think Again: The Power of Knowing What You Don't Know by Adam Grant. Adding to the growing body of mainstream books about mental blind spots, cognitive biases, and thinking errors, Grant advocates that folks would be wise to seek to think like scientists. This means to state, “Here is what I think and let me see if it is true,” as opposed to thinking like lawyers or preachers—i.e., let me show you the facts or let me use carrots and sticks and a Bible verse to get my point across.

In a Christian context, Matthew Korpman seeks to highlight blind spots in his book Saying No to God that uses biblical examples to reinforce the need to question what we may have been told is God’s way.

In The Making of Biblical Womanhood, Barr, as a historian, highlights contexts of God-fearing women through the ages and advocates that culture has impacted the project of living biblically more than we might have thought. For so many of us, history isn’t the story of what actually happened; it is just the story we want to believe. It is not a public story we all share, but an intimate one, passed down like an heirloom, that shapes a sense of who we are. So many stories told about history are really stories we tell about ourselves. Is this the case with biblical womanhood?

Culture is shaped and reinforced by narrative. Barr’s discussion of biblical womanhood is really a discussion about culture and the way narrative has impacted what the church has assumed to be unassailably true.

Or, does Christianity optimally situate itself in culture? If so, what does that fluidity look like? Ross Kane, in the June 16 issue of Christian Century, makes the case that pure faith is a myth and that faith will be situated in culture—one can trust the Holy Spirit to take care of things.

So, reifying a story of what is “biblical” or God’s way can be problematic. To what extent have we been impacted by culture?

Evangelical Politics and Women: Reflections on The Making of Biblical Womanhood

The Southern Baptists narrowly headed off an ultraconservative takeover on June 15 when they choose Ed Litton, a moderate pastor from Alabama, to be the next president of the denomination. According to The New York Times, “Tuesday’s vote capped months of angry debate over race, gender, and other cultural divides, as the denomination’s leaders and insurgents wrestled over whether their future hinged on wrenching the church even further to the right or broadening its reach.”

What influence did Beth Allison Barr’s book The Making of Biblical Womanhood play in the Baptist election? Do bestselling books like Barr’s and Kristin Kobes Du Mez’s Jesus and John Wayne influence the votes of Evangelicals? I ask the question because I was reading Barr’s book at the time of the Baptist election. And the issues that Barr explores—subordination of women, sexual abuse, patriarchy, racism—were also the ones that Baptists were discussing at their June meeting. I don’t mean to infer that the Baptist Resolutions Committee composed their list based on her book. My hope is that some of the “messengers” (representatives who vote within the Baptist system) had read her book and because of it better understood the implications of the issues before them.

A Southern Baptist who is also a medieval historian, Barr combines her personal story with accounts of women throughout history to explain, as her subtitle says, “How the Subjugation of Women Became Gospel Truth.”  She confesses in the beginning pages of the book that experiences in her life, “personal exposure to the ugliness and trauma inflicted by complementarian systems in the name of Jesus,” tipped her over the edge. “I can no longer watch silently as gender hierarchies oppress and damage both women and men in the name of Jesus. But what brought me to this edge was not experience; it was historical evidence. It was historical evidence that showed me how biblical womanhood was constructed—brick by brick, century by century” (9-10).

Barr begins her account by tracing the history of patriarchy, looking at the lives of women in the Ancient Near East, examining The Epic of Gilgamesh, as well as Genesis. “What if patriarchy isn’t divinely ordained but is a result of human sin? What if instead of being divinely created, patriarchy slithered into creation only after the fall? What if the reason that the fruit of patriarchy is so corrupt, even within the Christian church, is because patriarchy has always been a corrupted system?” she asks (25).

Next, she separates “biblical womanhood” from the Roman household codes that undergird the writings of the Apostle Paul. “What if Paul was teaching Christians to live differently within their Roman context?” she asks, suggesting that the household codes can also be read as resistance narratives (46).

Then Barr moves through medieval and reformation history, highlighting women who preached and taught the Gospel truth in each era even while women were being written out of the English Bible, and subordination was being sanctified until “biblical womanhood” was considered Gospel truth. She describes the work of historian Catherine Brekus as reason to take heart. “In one of the most encouraging appendixes to an academic text that I have ever read, Brekus charts each woman she could find in the records who preached and exhorted in American churches between 1740 and 1845. One hundred twenty-three names. One hundred twenty-three women who felt God’s calling on their lives and responded,” she writes. That list of 123 women included Ellen Harmon White (170).

As I read, I kept having flashbacks to the days of the Theology of Ordination Study Committee within Adventism. At that time, the presentations to that committee on headship theology and complementarianism had me scratching my head. Where did this theology come from? It wasn’t anything that I remembered from my Adventist upbringing. Reading Barr’s book explained a lot. The influence of Evangelicalism is heavy within our community.

However, does the testimony of history, of a cloud of women witnesses, matter to the Baptists, to Evangelicals, to Seventh-day Adventists? “What if we realized,” as Barr concludes, “that God has never stopped calling women to do his work—as preachers, teachers, missionaries, evangelists, and authors? . . . . What if we finally stood together, united by our belief in Jesus instead of divided by arguments over power and authority?”

“Jesus set women free a long time ago,” she writes. “Isn’t it finally time for evangelical Christians to do the same? Go, be free!” (218).

Carmen Lau is the board chair of Adventist Forum, the organization that publishes Spectrum.