Andrew Ashley is a 22-year-old senior Theology major, graduating this May from Southern Adventist University and the former Student Body President at Southern.

In the wake of escalating racism on Southern's campus, Ashley (pictured left) helped start a movement to counter racist comments and attitudes. Below, Ashley discusses the movement and how he hopes it will combat bigotry on Adventist campuses throughout North America.

How did the #livetolisten movement come to be? What's the story?

After the SDABlackout controversy, my white friend Jordan Putt (pictured right) and I decided to write articles apologizing to each other’s race (See Andrew Ashley's "Dear White People" and Jordan Putt's "Dear Black People.") However, on Friday night, for whatever reason there were several students who posted racial slurs and insults on Yik Yak. This created chaos on campus and on social media. From what I saw, the black community is legitimately hurt (for good reason) that there was this display of racism going on while a vespers hosted by the Black Christian Union was happening. So naturally they started to express their frustration on social media and through conversations.

Now, while this was completely appropriate, and even necessary, there were white students who felt attacked and offended. I am sure there were some black students who were attacking, and I’m sure there were some white students who were completely overreacting and being childish, however, one thing was for sure, the campus was divided. It seemed that everyone became offended, sensitive, aggressive, and frustrated with one another. Most black students felt isolated, and scared, and many white students expressed that they felt pain and fear too. Here’s the thing, I had my own opinion about how people should and shouldn’t feel, but what I realized is that my opinion is just another opinion if I don’t spend time listening to the voices of the hurt, confused, indifferent, and fearful.

That Friday night, I couldn’t sleep because of the anxiety and hurt I felt for those who were hurt by the Yik Yak posts, those who were accused of doing something they had nothing to do with, and even my brother’s Grady’s post that didn’t receive the healthiest response by fellow students. And as I sat there crying my eyes out, and talking to God, I was reminded in short, that the gospel is all about humility, all about patience, and it’s all about listening. While it might be awkward, painful, humiliating, and/or exhausting to talk, listen, and have mature conversations about this issue of racism; it is the only way to get anywhere with this topic.

So then at 5:00am Sabbath morning, I posted two status updates: one explaining why I wrote an apology letter to my white community in the first place, the other challenging the SAU community to combat all the negative and angry post on both sides by posting positive statuses, affirming and even inviting healthy dialogue with other ethnic groups outside of your own. The hope was to start a movement, not a trend--a movement that brought attention to the problem, but also focused on some solutions.

I later made a video (watch it here) explaining what this movement is about and invited the whole Adventist community to get in on the listening. That is when the SAU community responded. Black, white, Asian and Hispanic students all began to post statuses of love and affirmation for one another. People began to share the status I put up, the video I made, and my article. Others started to share Jordan’s article as well. And that is when I began to see how beautiful people can be.

Within 48 hours the video, article, and post has gone viral, and while there are many questions as to how effective this movement is, and a lot of awkward conversation are still to be had, what we are seeing with the hashtag is an effort to unite. This is a true blessing. But what we have to remember about this movement is that in order to unite we have to listen to each other’s voices. Putting up a post and telling everyone that you have the answers to the problem isn’t nearly effective as posting a status asking a question to an ethnic group different from yours.

Obviously, some in the Collegedale/SAU campus vicinity have expressed ugly bigoted views over the past weekend in particular. To what extent do you feel those attitudes and statements are reflective of what is actually taking place on campus? Put in other words, what are things like at SAU right now with all that has been going on? Attitudes, actions, etc?

The truth is, even though I believe that the Yik Yak incident is a true indicator that there are several racist people on campus who could possibly threaten the emotional safety of a person of color like myself, I believe that there are thousands of students, the whole of the faculty, and most of the community that combat this threat with true southern hospitality, true acceptance, and true loving kindness. I am fully black, and I have been here for five years. In those five years I have had the privilege of leading in Campus Ministries, experienced an abundance of ministry opportunities, and have had the honor of serving as Student Association President.

At the same time, I have been stopped by the collegedale police and searched for no apparent reason several times, and I have also had conversations with "friends" and listened to them say the most racist, hurtful things without thier even realizing it. But I also have thousands of friends here who have beautiful souls. So the notion that Southern is a racist, and unsafe school for blacks is just not true. However, racism is present and visible to a person of color like me, and it is vital to understand as a white person, just because you don’t see it or experience it, doesn’t mean it doesn’t exist.

Before, this past Friday if you would to ask the faculty and white students whether they think racism is a problem at Southern, I believe most would say no. But, what we have discovered is that there is racism and prejudice from both sides. Education is the key to bringing down the ignorant blinders we call racism. As for the attitudes on campus, some are scared, some don’t care at all.

Some students are being negative and discouraging conversation, but hundreds of students of all races are raising to the occasion and embracing the awkwardness that comes with addressing the issues. Since it is mid-term week many people are trying to be studious and empathetic at the same time. So I would say we are doing a great job as a student body. 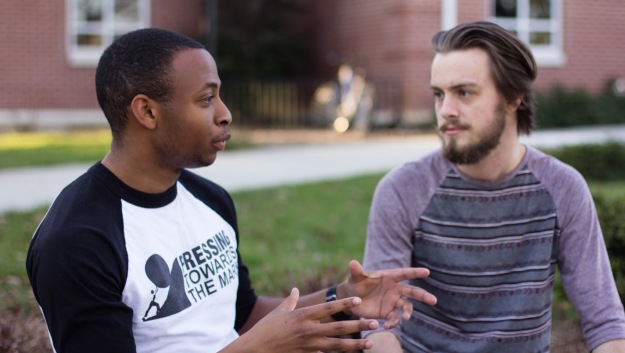 What are you hoping to accomplish through the #LiveToListen campaign? Do you feel as though the culture that produced racist comments and attitudes can be changed?

Similar to a marriage, there are many times when there are disagreements, misunderstanding, and hurt from both sides. However, not talking about it doesn’t fix the problems. Instead it just affects the quality of the relationship, it creates tension, and could eventually destroy the marriage. Talking about problems is the only way to solve them. However, we believe there need to be healthy, productive conversations that include listening, thinking, and trying really hard to understand. So the plan with this movement is to promote conversations on our university campuses, discussions at our dinner tables, and affirmation on our social media platforms.

Here are some of the things we are doing:

-Having University Prayer because it is clear that we need more of the Holy Spirit on this campus.
-We are starting an Instagram page encouraging people to post pictures of a friend of another cultural background that has been a blessing in their life, mentioning something they have learned from them.
-We are starting a YouTube channel creating content and recording discussions across North America regarding race relations, LGBTQ issues, politics and other controversy issues that we tend to avoid in the church.
-We are working with the Adventist Intercollegiate Association and hoping to have #livetolisten forums at various universities.
-We are also launching a website blog, where both black, white, Asian, and Latino can talk about their experiences, perspectives, and others can go on and read/learn about interesting perspectives that challenge them.

The reality is, while most people will like to think that “we need to be more focused on winning souls!” they must understand that we can’t win souls, until we win souls. We need to, ourselves, learn about our prejudices, address some of the tension and deal with it. If not, we are no better than a married couple that is super involved in ministry but has a broken marriage.

This movement won’t be able to change the racists in the Adventist Church who call themselves “Christians,” but our prayers and love will hopefully cause conviction by the Holy Spirit.

Who all has gotten involved in the #LiveToListen campaign thus far (twitter accounts, people, institutions, and so forth)?

Literally hundreds of students are stepping up to help lead this movement, and thousands of others are being made aware and contributing to it. Bryant Rodriguez, Jordan Putt, Keran Davis, Adam Swayer, Nisha Johnny, Debbie Pinto, Jake Metsner, just to name a few. Union College, Burman University, Andrews University, and more. Dr. Lisa Diller, Evangelist and Dr. Alan Parker, Dr. Don Leatherman, Dr. John Nixon, and many other students and faculty.

What has been the response among students to official statements by SAU administration, particularly President Bietz's outline of the steps he has taken and is taking?

The black community, from what I have observed, and the community at large are very grateful for Dr. Bietz’s actions. Many people at first questioned why it took so long for him to respond because this has been an issue for two, three weeks now. But, once students realized that he was out of town, has 101 things on his plate, and doesn’t necessarily have time to check up on the “new gossip” on SAU campus all the time, we are grateful. It’s important to see older white men like Dr. Bietz speak up and become an advocate for black students. Therefore, as a young black man, I also have to be an advocate for him.

Say just a bit about your personal background and how it shapes who you are now.

I grew up in Georgia, attended a black church, was homeschooled, and I experienced how racism affected me, my parents, and my friends. I learned from my African American mother to be patient, be kind and loving to every color of the rainbow. I learned from my Jamaican father to work hard, and try to learn from everybody. Realizing that you don’t have all the answers. And I’ve learned from my experience at Southern, that while, because of my complexion I have experiences, struggles, and pain that some people can’t identify with or even claim don’t exist, there are hundreds, and thousands of young and old people, willing to listen, love and support me as a human. And though we may have problems sometimes, I decide to support them back. "My dear brothers and sisters, take note of this: Everyone should be quick to listen, slow to speak and slow to become angry." It is natural to get angry, it is easy to speak, it is honorable to listen.