FRIDAY EVENING VESPERS
Southern Adventist University students are required to gain worship credits by attending services on campus, including Friday evening vespers programs held at the Collegedale Seventh-day Adventist Church. The Black Christian Union (BCU), an official student group on the Southern campus, led the vespers program, part of Southern’s commemoration of Black History Month. A BCU worship team led in song, singing a mix of gospel anthems and praise choruses. Following music, Drew Blake led the assembly in prayer, saying, “I ask that you help us to remember that we - we are your children.”

A group of students read from Romans 12:4 and the following verses in six languages. The key words were, “So we, being many, are one body in Christ, and every one members one of another.”

After that, two students recited an original spoken word tribute to black heritage, composed for the occasion:

Who Am I? I am a black man/woman, skin as rich as the soil from the motherland.
From where our ancestors were taken, they say, “Matt, get over slavery.” How in the world can I when that is where you start my history? ...The melanin that radiates from my skin is just a reflection of my home. We are queens, highly esteemed, with braids flowing along ebony shoulders…
So now we break down the barriers and segregation in the 21st century. I don’t believe my savior died just so we could despise diversity. See, if God has a love for such a wide range of hues, then why wouldn’t he create the variety? ...Oh Christians, when will we stop moving away to the left when we see our neighbors, and get it right? ...Though there is an ‘I’ in Adventist, there is an ‘I’ in hypocrite, take those eyes and see. ...We preach about unity but our actions scream for division. ...God is a God of love, meaning that he embraces diversity within a nation.

After the spoken word recitation, Mark Belfort introduced the evening’s speaker, Corey Johnson, a graduate of Oakwood University and a seminarian at the Andrews University Seventh-day Adventist Theological Seminary, sponsored by the Allegheny East Conference. Following a special musical selection, Johnson rose to speak, his title, “I am Valuable.”

While Johnson preached passionately of the value of all humans in God’s sight, some students in the audience posted racist comments on the Yik Yak app.

SOCIAL MEDIA FIRESTORM
Several defining features make Yik Yak different from other social media applications. It is entirely anonymous (users are randomly assigned icons that identify their comments in conversation threads), and is location-based, meaning that people can find and respond to yaks from other yakkers in a 5-mile radius at any given time. This allows people to interact with people near them without being identified.
During the BCU vespers, yakkers in the Southern Adventist University vicinity began sharing racially-charged yaks, some of them deeply racist. Before long, screen captures of the racist yaks began circulating on Facebook and Twitter, quickly amassing hundreds of social media shares. 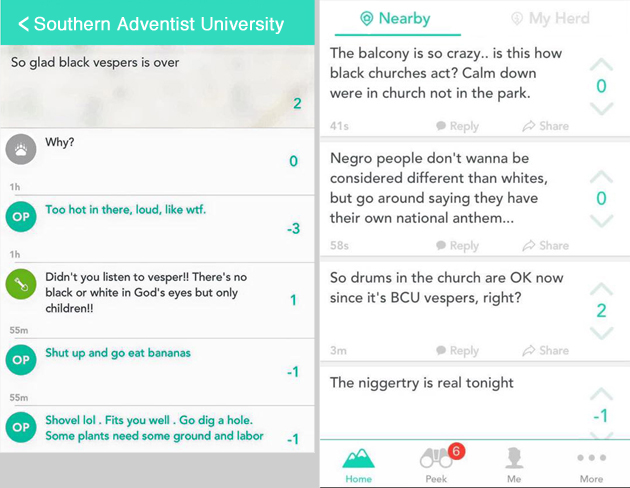 While those screen captures made their way around the Web, on the Southern campus, the yakking continued and escalated. For hours, racially-charged comments lit up social media.

#SDABLACKOUT
Evidence of racial tension at Southern had already been growing in the days before Friday's BCU vespers. Around Valentine's Day, Southern and Andrews University held blackout days on their respective campuses, encouraging students of all races to participate by wearing all black clothing. When a satirical response to the #SAUBlackoutDay went viral on social media, it prompted student leaders at Andrews and Southern to create an SDABlackout event for students on all Adventist campuses. 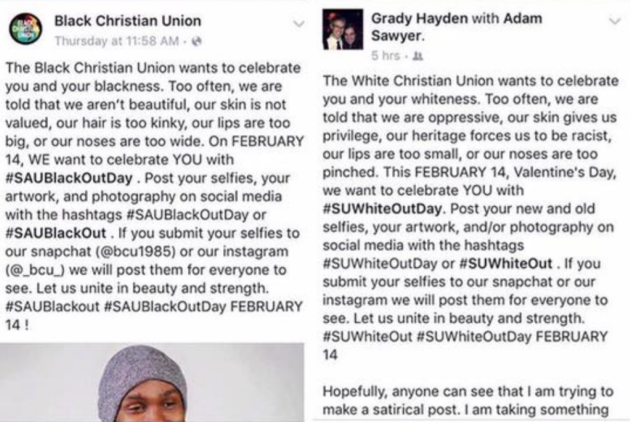 Grady Hayden, the student who created the satirical post, subsequently apologized to the author of the BCU post announcing the #SAUBlackOutDay "for using her words against her and misrepresenting her." Hayden also wrote a letter to the editor, published in the Southern Accent, Southern's student newspaper, in which he decried what he saw as a double standard: "It is okay for a black community to do and have something that is exclusively theirs. However, when a white community tries to do the same thing, the black community will take up arms in opposition."

Bruce Banner invited students at all Adventist colleges and universities to participate in an SDA Blackout solidarity event on Friday by wearing black that day. From Banner's Facebook post,

In response to the ignorant and ongoing remarks that are taking place at Southern regarding Black History Month, I humbly ask of all students from every Adventist institution to have a day of solidarity tomorrow February 26, 2016, against these insensitive remarks and to bring attention to what is going on in our own community. I kindly request for all those participating to share this post and wear all black tomorrow posting a picture of their outfit with the hashtag [#SDABlackout]. Thank you"

Several students, black and white, participated in the blackout event at the BCU vespers.

SOUTHERN ADMIN RESPONDS
On Saturday Southern Adventist University posted an official response on its Twitter account, decrying the racist comments on social media, saying, “Southern’s administration is appalled and deeply saddened by the hurtful, insensitive comments regarding race that have been recently expressed in our community.”

The below statement went out today on social media prompted by hate speech that appeared on campus Friday night. Hate speech of any kind will not be tolerated. I arranged a conference call with President’s Cabinet this evening to further discuss how Southern can take action. The group was unanimously concerned about making sure students feel safe, welcomed, and an important part of our community.

The administration is taking the following immediate actions:

1. As of tonight, Yik Yak will no longer be accessible using Southern’s internet service. This weekend, students have repeatedly expressed their concern about the language used in this app and the abuse of it in our community. The university simply cannot continue to provide network access to a system that is being used to hurt and offend.

2. Yik Yak has been contacted about the hate speech that has occurred. We have asked Yik Yak what they can do to help Southern discover who shared this hateful speech so that corrective action can be taken.

3. The Vice President of Student Services will be contacting BCU and other campus leaders with an invitation to meet with the President’s Cabinet this coming Monday so that administration can hear further concerns and listen to what additional actions the leaders might recommend.

4. I will speak to the issues of racism, prejudice and intolerance at Convocation this Thursday, March 3.

Any student who knows the name of someone who is engaging in any form of racial insults or threats should alert administration immediately so that the behavior can be addressed.

Every student on this campus is important. I will continue to work to ensure that Southern is a campus that is Christ-centered in belief and action.

In Christ and in prayer for a campus that portrays the unity that a demonstration of the love of God. (John 17:20-23)

Some students also expressed indignation and opposition to the racist comments, on Yik Yak, Twitter and Facebook. 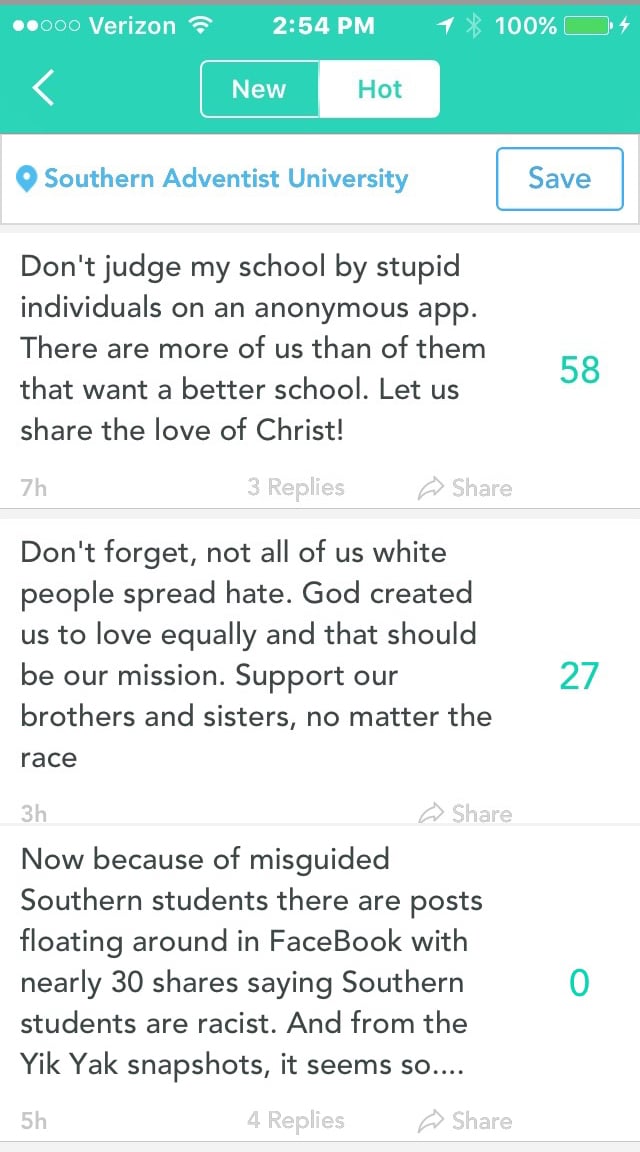 However, as of press time on Sunday morning, the insensitive comments had not abated. These are some of the most recent yaks. EDIT: This version of the story (published Monday 2:30PM PST) corrects the timeline of events on the SAU campus leading up to the SDA Blackout Day.