My Prayers for Ukraine

My Prayers for Ukraine 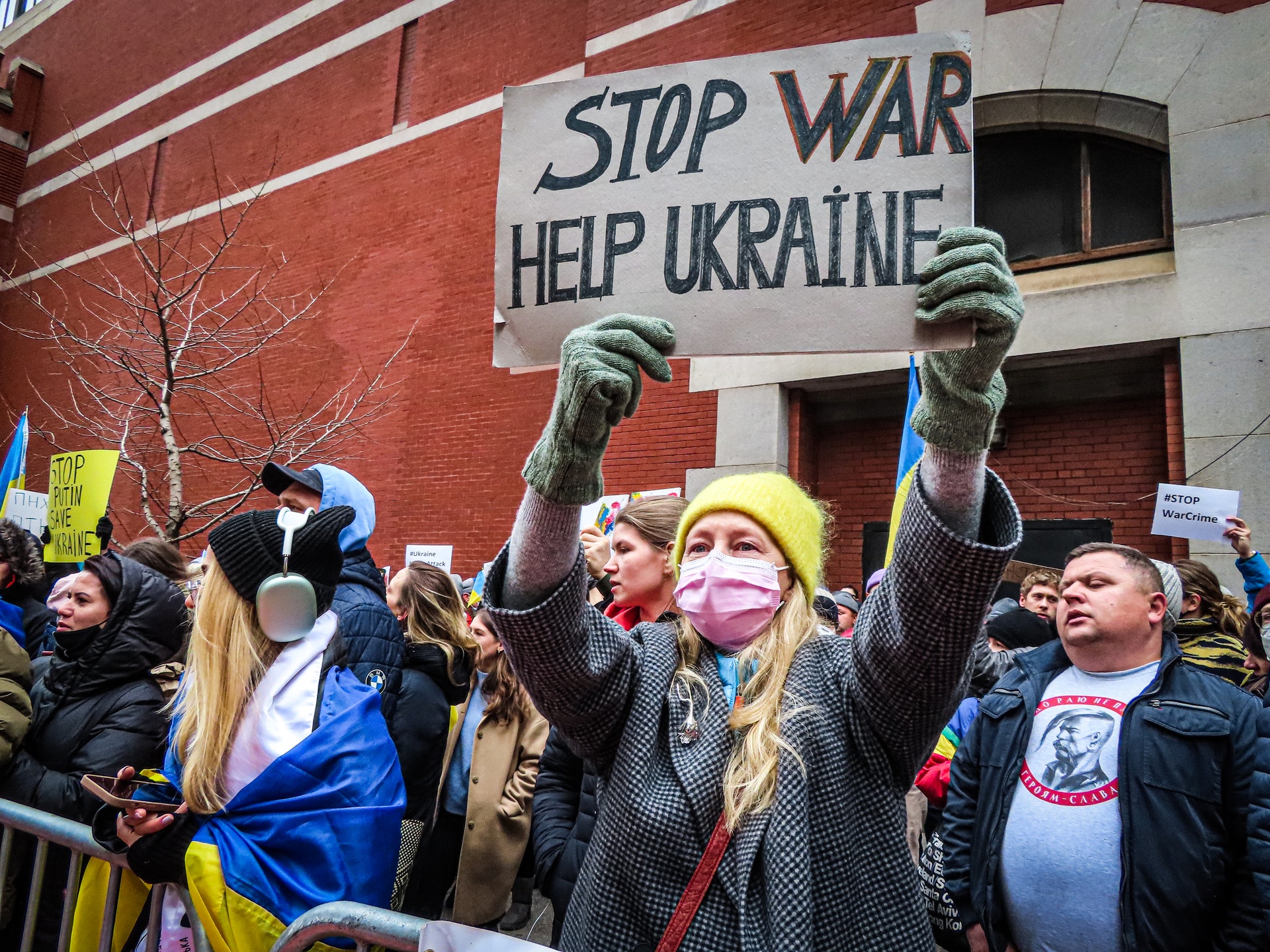 “Just to put it bluntly, these are not refugees from Syria, these are refugees from neighboring Ukraine. That, quite frankly, is part of it. These are Christians, they are white, they're very similar to the people that live in Poland.” NBC correspondent Kelly Cobiella initially caught flack for this statement that seemed to legitimize the underlying racist tropes at play during the crisis in Ukraine. However, the full clip revealed that she was not herself endorsing this sentiment. However, she was very honestly answering her colleague’s question asking why those fleeing from Ukraine were being welcomed more readily than refugees from Syria. And Cobiella told no lies. It’s blatantly obvious that discrimination and bias are at the heart of why this crisis is being viewed so differently by so many.

Her journalistic colleague, Charlie D’Agata, on the other hand, was voicing his individual opinion when he referred to Ukraine saying, “This isn’t a place, with all due respect, like Iraq or Afghanistan, that has seen conflict raging for decades. You know, this is a relatively civilized, relatively European—I have to choose those words carefully, too—city where you wouldn’t expect that or hope that it’s going to happen.” Although he later issued an apology for a “poor choice of words,” the belief he gave voice to is widely held. Scores of people across social media affirmed his initial statements and doubled down on the idea that a population that’s predominantly white, European, and Christian is somehow more deserving of peace than Black and brown people from African or Middle Eastern countries who maybe believe in Islam or other non-Christian faiths.

Fellow reporter Lucy Watson from ITV News expressed disbelief about how “unthinkable” it is that Ukraine was enveloped in this conflict. She scoffed with incredulity, “This is not a developing third-world nation. This is Europe.” Speaking of the Ukrainians, Bulgarian Prime Minister Kiril Petkov brazenly declared to reporters, “These are not the refugees we are used to . . . these people are Europeans . . . These people are intelligent, they are educated people . . . This is not the refugee wave we have been used to, people we were not sure about their identity, people with unclear pasts, who could have been even terrorists . . . In other words there is not a single European country now which is afraid of the current wave of refugees.” People attempt to justify the “less civilized” trope by noting that countries like Syria and Afghanistan have seen decades of war. But let’s conveniently leave out that many conflicts transpiring in so-called “third world nations” were initiated, facilitated, and maintained by the actions of supposedly “civilized” nations. If I bomb your home and ransack your possessions, are you the uncivilized one or am I?

The prejudice is not solely relegated to gross verbal stereotyping emanating from Western news sources outside of the conflict. Ukraine itself is complicit in displaying tangible acts of discrimination towards Black and brown people within its own borders. Scores of reports accompanied by video evidence have come to light showing Ukrainian border officials pushing back non-white nationals attempting to evacuate the country. Students, women, and children have been forcibly removed from trains and buses destined for Poland to make room for “whites only.” Evacuees who aren’t citizens have been refused resources because they have been reserved for “Ukrainians only.” Students from various countries in Africa and the Caribbean have been forced to wait for days to cross the border while being told they’ll need to go “to the back of the queue.” They have even been threatened that they would be shot if they attempted to evacuate ahead of any white people. There have been reports that many have been turned away for being Indian as well. Recordings captured uniform border agents telling them “your country did not help us so we will not help you.”

I’m praying for Ukraine . . . to stop being racist.

These jarring accounts are the tangible manifestations of cultivated biases that are held across the world, even within the church. Racism among Christians is higher than among nonreligious groups. But in addition to the racial discrimination present within Christianity, there is a significant amount of religious bias. As the prospect of war became imminent, hundreds of prayer requests in Adventist circles sprang up for Ukraine. They were often accompanied by statistics noting how many Adventist churches and schools were in the country. I don’t think those who shared these posts harbored any overt ill will. However, it subtly reinforces the idea that people have to be “like us” to capture our attention. When trouble befalls others, there’s no surprise or sense of care. When it happens to someone we perceive as similar, suddenly it awakens concern. British journalist Daniel Hannan stated exactly that in his article in the Telegraph when wrote, “They seem so like us. That is what makes it so shocking. War is no longer something visited upon impoverished and remote populations. It can happen to anyone.”

Of course, in-group bias isn’t a new phenomenon. This is why nonprofit groups like Save The Children (not to be confused with the QAnon group of the same name) attempted to capitalize on this tendency for the benefit of a worthy cause. They created video advertisements showing a young, blond, white girl being forced into the throes of war and her subsequent harrowing journey of navigating the world as a refugee. They knew it would elicit stronger emotional reactions to feature someone who many in their white audience could envision as their own daughter, sister, niece, grandchild, etc. This was witnessed live during a BBC interview with former deputy prosecutor general of Ukraine, David Sakvarelidze. He became visibly choked up as he stated, “I’m sorry. It’s very emotional for me because I’m seeing European people with blue eyes and blond hair being killed, children being killed every day.” Let’s be clear. It’s natural to feel an affinity for people you can relate to. There is automatically a strong visceral pull when you see someone who reminds you of a person you’re directly connected to. But here’s the sticking point: many of the people in positions of power and influence are able to feel kinship with little white children, yet they don’t/can’t imagine that the little brown girl in a hijab or the little Black boy with a Nigerian accent or even a Ukrainian citizen of African descent could possibly be someone in their family. And they treat them with indifference because of it. In other words, if you aren’t in the in-group, do you really matter?

I recall a seminary class that welcomed a couple to give a guest presentation. All these years later I neither recall the name of the course nor the rest of the subject matter discussed in that day’s class—besides a single lesson. The couple was Jewish. They discussed how hurtful it was to hear Christians affirm each other when they do something positive by saying “that’s so Christian of you.” I was confused. Never one to shy away from asking a question, I raised my hand. “I don’t understand. What’s offensive about that?” They explained that it was similar in impact to one white person congratulating another by saying, “that’s so white of you!” I was flabbergasted—by several things. First: white people said that to each other? They and several other people nodded that this was a real expression within white communities. Second: I realized that when I made similar statements about being Christian, I was exhibiting the same sort of bias. Lastly: there were still some classmates who didn’t see anything wrong with either saying “that’s so Christian of you” or “that’s so white of you.” As a person marginalized by race, the bias was obvious to me in one instance. As a person privileged by religion, it had been a blind spot to me in another. Bias isn’t only inherent in pushing Black students off of a train crossing the border. It’s also present in words and actions that insidiously creep into our language as we talk with one another. Sometimes these biases remain hidden from the rest of the world. And sometimes they are put on public display, like when Charlie D’Agata said the quiet part out loud.

So here are my prayers for Ukraine:

– I pray Ukrainian officials will stop exercising racism towards the thousands of Black and brown people within their borders who are just as scared and weary as those with white skin.

– I pray that the media will stop advancing the bigoted stereotypes that only white people are worthy of peace and safety.

– I pray Western society will stop equating “unfamiliar” with “uncivilized.”

– I pray that governments and educational systems will be honest about the direct roles Western nations have played (and continue to play) in the upheavals taking place in those areas of the world that they have the unmitigated audacity to disparage because they live with war.

– I pray Christians will recognize that all people—regardless of their faith and beliefs—deserve our concern and compassion.

– I pray our desire to help others is not limited to our in-groups.

– I pray we are moved by the plight of all people regardless of their similarity to us.

– I pray that God will reveal my own blind spots in my speech and actions that continue to subconsciously convey harmful biases about others.

– I pray that we all will work towards creating a just and equitable society for all people.

Photo by Katie Godowski from Pexels