An Eschatological Critique of the Present 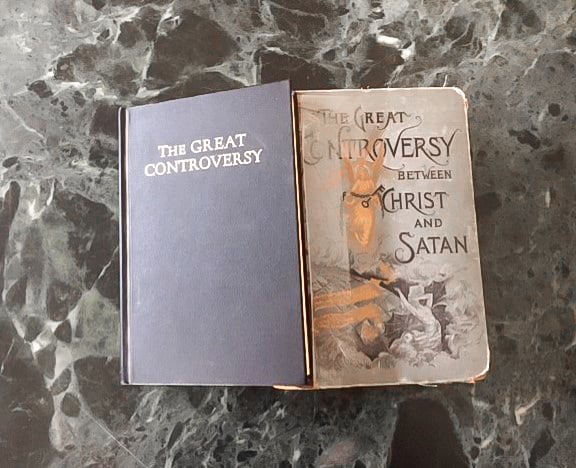 Dilution—when it extends and enlarges what in life is instead concentrated.

Selection—when it functionally considers a part and not the whole.

Metonymy—when it takes the part for the whole, or vice versa.

Radicalization—when it describes in advance an event, starting from its consequences.

In this article discussing The Great Controversy, I wish to more closely examine the structure of the first part of the book (chapters 1–21). In my article "A Narrative Phenomenology of Religion" (chapters 1–3), I considered the excellent narrative principle E.G. White used for her analysis of religions. According to this principle implicit in her narrative, no ancient or modern religion is above critical analysis, whether Catholicism, Protestantism, or even Adventism. In my article "A Diatopical Hermeneutics" (chapters 4–17), I commented on White's historical description of the Bible’s diffusion throughout Europe. I pointed out, however, that behind this history is a hidden hermeneutical analysis of the various biblical interpretations present in Europe. And these were not always the same, even though they all defended the validity of the Bible as the word of God.

Now I will briefly analyze the last four chapters (18-21) of “part one” (chapters 1-21). These chapters introduce an eschatological analysis that compares postmillenarianism and premillenarianism with respect to what a critique of the present must be.

We begin by considering Catholic eschatology. It embodies, in practice, a typical postmillenarian eschatology, optimistic of the present time, as managed by the church. While Catholicism prior to Constantine is certainly premillenarian in spirit, post-Constantinian Catholicism, up through the present, is essentially postmillenarian. The so-called "Constantinian turn" represents a theological shift from "suffering with Christ" to "reigning with him."[1] While this euphoria in managing the present through the church has suffered hard blows in recent centuries, it essentially hasn’t changed. It has simply shifted from a political dimension to an ethical-social dimension.

And Catholicism shifted, not because it wanted to but because it was forced to. True enthusiasm for a possible establishment of the kingdom of God on earth has become the banner and promise of modernity. In fact, according to Karl Löwith's well-known thesis, the modern world is nothing other than the essence of Christian eschatology, secularized. It is the modern world—with its politics, economics, and technology—embodying the true postmillenarian spirit. But this is not a presumption. Medieval Catholic postmillenarianism had hardly guaranteed peace when restricted to the spiritual sphere, so the modern postmillenarian spirit has instead brought concrete and material well-being to substantial segments of the world’s population. In this sense, true postmillenarianism could not have emerged before modernity in territories and "survival communities" that were formerly barely able to guarantee bread for all. And the breaking point for concretely seeing a possible kingdom of God on earth was the nineteenth century, with its Industrial Revolution. Only in that century was awareness born, for the first time and in a concrete way, that it was possible to create the kingdom of heaven here and now. But, after a century and a half of indelible tragedies, we now know that the postmillenarian euphoria of modernity has been heavily betrayed.

Yet Catholicism has not stood still. It has partially learned from its mistakes and developed one of the most innovative, consistent, and penetrating critiques of this postmillenarian modern euphoria. What is most surprising is that it made that critique of the present very prematurely when, at the end of the nineteenth century, modernity was in full swing and growing. At that point it was impossible to see in advance the contradictions and alienations of modern postmillenarianism. This Catholic critique is articulated in the "Catholic Social Teaching," born with the Rerum novarum of Leo XIII in May 1891. The Rerum novarum is a concentration of reflections and criticisms of modern capitalism, starting with its perverse effects on the working class. But it is also a critique of the nascent socialist solution to focus on civil society.

Three years after Adventism elaborated a harsh premillenarian critique of the present through the publication of The Great Controversy in 1888 (second edition), socio-cultural Catholicism realized in 1891 a broader, more consistent, and visionary postmillenarian critique of the present through the Rerum novarum. And while that critique of the present was already harsh, incisive, and daring, there have been revivals and updates. For example: 1931 (with the Quadragesimo anno of Pius XI); 1971 (with the Octogesima adveniens of Paul VI); and above all in 1991 (with the Centesimus annus of John Paul II). Meanwhile, the Adventist premillenarian critique, made via The Great Controversy, remained stuck in an old, essentially stationary nineteenth-century analysis. And it was restricted to only the spiritual sphere, without any serious cultural, economic, or political considerations.

But the aging of our premillenarian critique of the present is not the fault of White herself. It is we modern and postmodern Adventists who misread her and allow White to act as a paralyzing element in our thinking, leading us to rational, cultural laziness and even spiritual myopia. The Great Controversy should not be distributed as a kind of compulsive religious sport. It must first be read, then understood, then compared with today's reality, and eventually distributed wisely and without fanaticism.

Evidence of the pertinent reading, not only of the Bible but also of her own time, is given in chapter 18. And because we are no longer nineteenth-century people, we need to consider it not in its form but in the mechanism exposed. White writes, through the introduction of William Miller, what she thinks of the postmillenarian euphoria and the relevance instead of a premillenarian critique:

Taking the manner in which the prophecies had been fulfilled in the past as a criterion by which to judge of the fulfillment of those which were still future, he became satisfied that the popular view of the spiritual reign of Christ-a temporal millennium before the end of the world-was not sustained by the word of God. This doctrine, pointing to a thousand years of righteousness and peace before the personal coming of the Lord, put far off the terrors of the day of God. But, pleasing though it may be, it is contrary to the teachings of Christ and His apostles, who declared that the wheat and the tares are to grow together until the harvest, the end of the world; that "evil men and seducers shall wax worse and worse;" that "in the last days perilous times shall come;" and that the kingdom of darkness shall continue until the advent of the Lord and shall be consumed with the spirit of His mouth and be destroyed with the brightness of His coming. The doctrine of the world's conversion and the spiritual reign of Christ was not held by the apostolic church. It was not generally accepted by Christians until about the beginning of the eighteenth century. Like every other error, its results were evil. It taught men to look far into the future for the coming of the Lord and prevented them from giving heed to the signs heralding His approach. It induced a feeling of confidence and security that was not well founded and led many to neglect the preparation necessary in order to meet their Lord. (321)

We should look beyond the descriptive limitations, reductive condensations, quick transpositions, undue overlaps, and extreme dramatization present in this paragraph. In it, White demonstrates that she understood her time better than we understand ours. Both the church and broader human communities were markedly more homogeneous then and still experiencing slow change processes. Churches today, as well as societies, have become radically heterogeneous, diverse, and experience accelerated processes. For this reason, before widely distributing The Great Controversy and presuming that times have remained static, we should try to understand ourselves and others better—at least as well as Ellen White does with her own time. And proof that times have become more complex and paradoxical is that while theologically we Adventists are staunch premillenarian, culturally we are instead zealous and militant postmillenarian. It manifests in how we buy, study, and work, and relate to food, medicine, and nature. Both of these eschatological attitudes and conditions paradoxically coexist together.