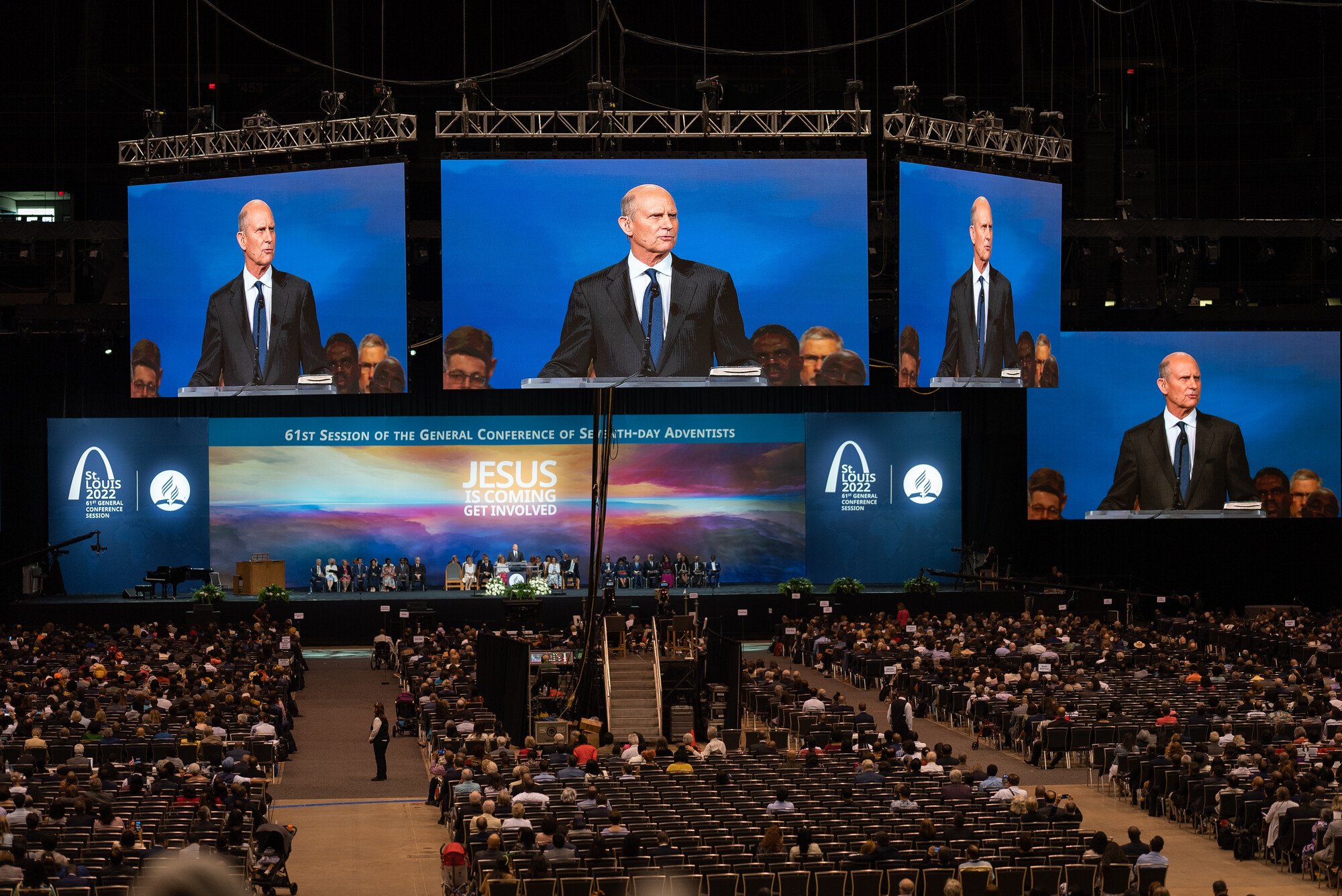 A pyrrhic victory can be described as one that inflicts such a devastating toll on the victor that it is tantamount to defeat. Such a victory negates any true sense of achievement and damages long-term progress. The original Pyrrhic victory came courtesy of Pyrrhus of Epirus, a Greek king who invaded Italy in 280 BC. He entered his first battle at Heraclea with a force of some 25,000 men and 20 war elephants and immediately scored a famous victory. The following year, he defeated the Romans during a heated clash at Asculum. Despite being victorious, he had also lost more than 7,500 of his most elite fighters, including many officers, and had no way of replacing the casualties. His failure to deal the enemy a death blow sent morale plummeting within his ranks. According to the ancient historian Plutarch, the warrior king was quoted as muttering, “If we are victorious in one more battle with the Romans, we shall be utterly ruined.”

The recent 2022 General Conference (GC) Session undoubtedly enjoyed a big audience, thanks to livestreaming. This also meant unregulated commentary and debate on social media platforms as Adventists tried to make sense of proceedings and their implications. Without critiquing some of the decisions taken by the 2,680 delegates drawn from church administrators, employees, and laity across the world, the session provided an important opportunity to celebrate achievements, elect leaders as well as reflect on the present. However, looked at closely, the session can be summed up as a “tale of pyrrhic victories.”  Prior to the session, Adventism had been becoming increasingly visibly polarized with the rampant use of labels such as liberal, conservative, progressive, historic, and biblically faithful. At the core has been a fundamental question of what is Adventist identity and how is it expressed? So, as the GC Session opened, battle lines had already been drawn for some of the contentious issues to be debated. On one side, self-confessed conservatives felt that Adventism needed to be defended from theological threats emanating from those claiming to be progressive. But on the other side were those who felt that the hallmark of Adventism should be the freedom to be open to a wide variety of interpretative techniques, being relevant to its context. Sadly, instead of building bridges, some of the outcomes of the session either exposed points of divergence or simply deepened the divide. Therefore, emerging from the “successful” GC Session are a deeply divided church, increasingly disoriented members, and a highly suspicious and controlling leadership.

A Crisis of Representation

Reports from the session indicated that out of the approximately 2,680 delegates, about 20 percent were women, and less than 3 percent were young people below 30. Clearly, this depicts a representation crisis worsened by the fact that only 693 delegates were drawn from the laity while the rest were church employees (652) and administrators (1,333). For a church that upholds equality and inclusion, the under-representation of women and young people and crowding out of laity by denominational workers raise questions about the future of Adventism. With the majority of delegates being denominational employees, what are the chances that these possibly became a majority in nominating committees that saw the reelection of some leaders? Why is leadership seemingly content with the exclusion from the session of critical voices from women and young people who form a large majority of the church’s membership? Even though during the same event, the Three Angels Messages Report presented on June 9 emphasized the importance of young people in finishing God’s work on earth, young people were largely excluded from meaningful participation in the same meeting.

The problem of representation at the GC Session finds its origins in local churches, where the male-dominated church boards that nominate delegates continue to be biased toward senior male members. If, indeed, the church is serious about finishing the work, then more seriousness is needed to dismantle processes and attitudes that continue to exclude women and young people.

As expected, there were moments when debates were heated, but it was the applause that came after voting that was more telling. On one side were those who felt like victors against the perceived onslaught of liberalism, while on the other side were the losers who felt marginalized or ostracized. The vote is no longer about the merits of an issue but rather who is its proponent. Though voting and the use of numbers is an easy tool to settle questions, in our polarized community, more caution is needed. The sigh of relief and the excitement over victory not only damage a sense of community but create invisible rifts that no manual, committee, or policy can fix. With one group feeling that they love the church more than the other, we label each other as threats that should be excluded. Clearly, Adventism finds itself having to deal with itself. Differences over how to read the bible, the role of Ellen White’s writings, or some self-defined fundamental belief become more definitive than how we relate to each other.

The situation is made worse by leaders who make it their agenda to deal with the so-called “threats” to Adventism, further alienating members. Excessive references to individuals and their views as threats breed the spirit of witch-hunting in the churches. Borrowing the words from an African proverb: “When a hyena wants to eat its children, it first accuses them of smelling like goats.”

If ever there is a time when we need conversations, more tolerance, and acceptance, it is now. In a context where the General Conference influences the life and tone at the local church in many ways, it is the tone at the top that matters. As long as leaders at the GC-level are focused on defending Adventism from perceived threats, what we continue to see, as aptly explained by Hanz Gutierrez, is mere growth rather than development. With very little change in leadership, it is more likely that Adventism will continue to celebrate the reinforcement of identity, certainty, functional compactness, homogeneity, and administrative growth at the cost of cohesion, community, and inclusion.

The End of the Local

At the root of Adventism’s challenges is making the local church responsive to its context while being true to Adventist values. In recent years, much emphasis has been on homogeneity, with the General Conference elbowing out unions and conferences to dictate what happens in the local church. Instead of being communities where people belong, our churches are increasingly becoming franchisees of the General Conference. Prayer, mission, communion, instead of organically emerging, are turned into fixtures or programs on a calendar. In a sense, churches are now measured on the extent to which they comply and align with centrally imposed programs and agendas. While on the one hand, the church laments high membership losses, the very things that present barriers to discipleship are not addressed—as more programs are added. The increasing apathy, especially among young people, is not about the absence of programs but the presence of an environment that is obsessed with behavior over belonging and answering questions that no one is asking. As a result, the local church finds itself detached from its environment, reduced to being a defender of tradition, an event where people go to get an experience, a place where people are informed but not transformed—where compliance rules over community and being correct is more important than belonging.

A homogeneous, centrally controlled local Adventist church risks being locally irrelevant and intolerant. The GC needs to be reminded of its role as a coordinating body rather than being the “Holy See” of Adventism.

In trying to protect itself, Adventism finds itself at war with itself. As a product of critique and questioning by our pioneers, we should be more open, more engaging, and less threatening. The very thing leaders are trying to contain is and should be the hallmark of Adventism. Whenever references are made to Adventist pioneers, it is not about emulating their spirit and attitude but rather regurgitating their content as if God is more present in the past than today. We are a movement and not a museum.

No matter how much we invest in fighting perceived theological threats, we will simply breed more curiosity, resentment, and—consequently—disengagement. The danger is that while seeing in others marks of apostasy, we fail to see the apostasy embedded in our attitudes. Going by the proceedings during the 2022 GC Session, it is apparent that there’s an excessive focus on protecting the Adventist brand rather than exploring new opportunities. Perhaps the time has come for Adventism to be clear on what we must believe, what we also believe, and what we can believe. Divergent views will always persist, and using political processes to stifle others into compliance comes at an existential cost.