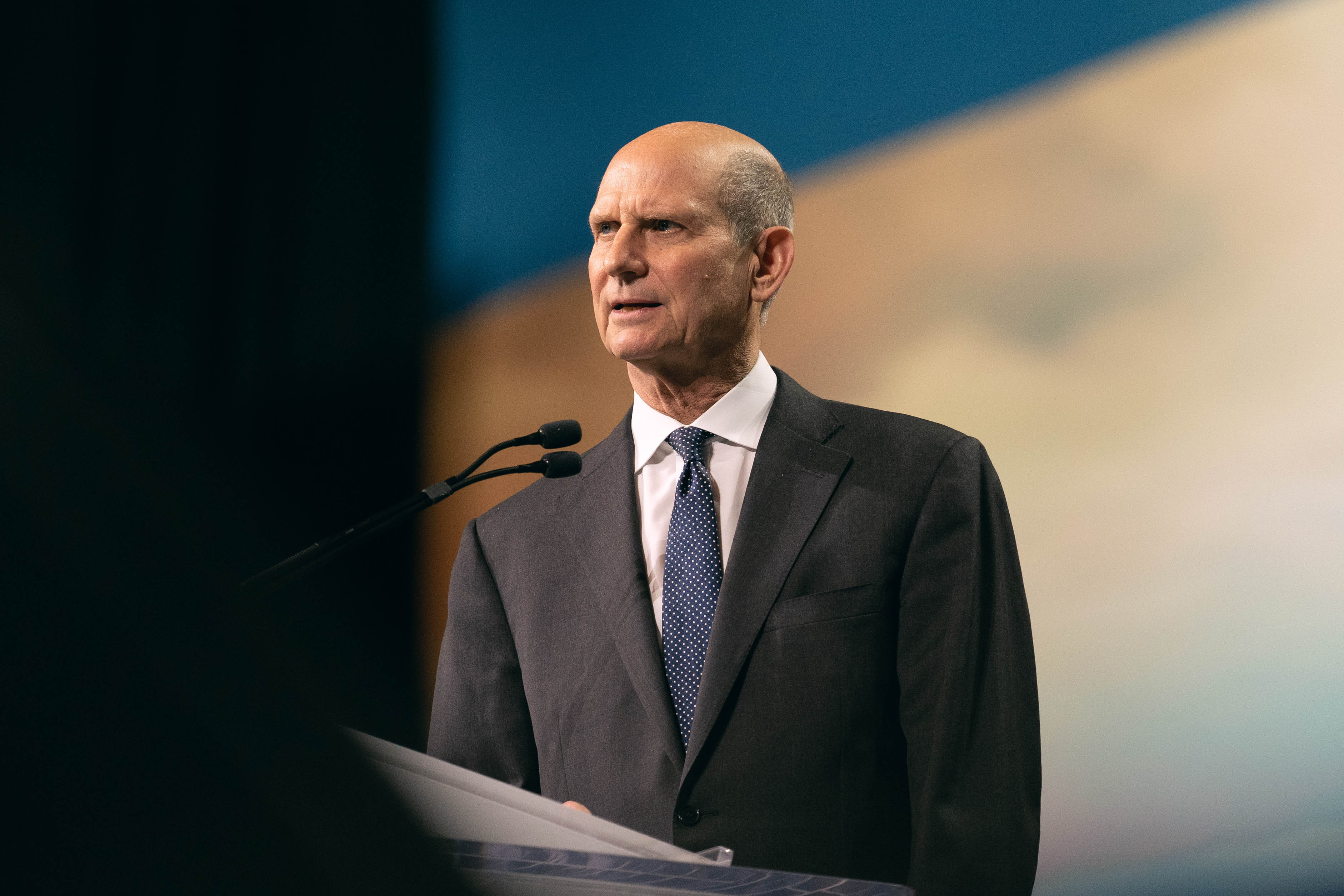 This past Monday, June 6, Ted Wilson was elected president of the General Conference (GC) of the Adventist Church for the third time. This reelection appears to be both a validation and a reinforcement of the identity, certainty, functional compactness, and administrative growth that President Wilson has been able to secure, with great will and discipline, in his long and careful stewardship.

This choice provokes, in the worldwide Adventist Church, an expected mixture of reactions. Most reactions are subjective and difficult to evaluate, but some are assessments with a more objective basis. This choice seems procedurally legitimate but historically inappropriate. Using a couple of references from the economic sphere, it does not create “development” but only religious “growth.” For a variety of reasons, some requiring much more detail, Wilson's two terms in office are positive from the standpoint of growth but severely deficient from the standpoint of Adventist development. Economically, the BRIC countries (Brazil, Russia, India, and China) have had, in the last two or three decades, strong growth. However, that does not guarantee a parallel "institutional development,” as can, unfortunately, be seen today with Russia, which recklessly and compulsively is destroying not only international trust but also its own democracy and internal institutional balance in order to invade Ukraine at any cost—driven by an intoxicated, short-sighted, and highly ideologized nationalist messianism.

Falling into the allure of growth while forgetting development is not only a constant political and economic temptation for nations, it can also take a religious form. And Wilson's administration has a fascination with Adventist growth and not development. This is seen in his recurring emphasis on certainty over doubt, results over necessarily tortuous experiential paths, affirmation over dialogue, action over interaction, and numbers over substance. Administratively and theologically, evidenced by his public speeches, Wilson knows only how to speed up and move forward. Pause, reverse, alternative or parallel paths seem not to exist in his vocabulary. In fact, they seem to be vices to shun, as if the Holy Spirit, when he intervenes, only introduces certainty and conviction. No, the Holy Spirit also and above all introduces into our lives and communities: pondering, fear, hesitation, doubt, and second-guessing. This is why Wilson’s pattern of stewardship can be described as "administrative messianism," which Walter Benjamin, in his famous "Theses on the Philosophy of History,"[1] describes as a typical modern cultural anomaly.

The criteria for development are different from those that determine growth. In economics, a main criterion for growth is the measure of annual GDP. Criteria for development, on the other hand, are reliability of institutions, division of powers, respect for minorities, etc. Criteria of spiritual growth are baptisms, better-constructed buildings, new programs and initiatives, and the distribution of books and various materials. Spiritual development criteria, in contrast, are ensuring internal alternatives, respect for various levels of government, alternation in leadership, quality of satisfaction, or full recognition of the mission and ministries of other churches.

Wilson's presidency is characterized by a strong tendency to make Adventism compact and homogeneous internally but also as seen by the outside world (other churches and surrounding culture). This strong push for homogeneity is, of course, not gratuitous. On the contrary, it responds to a logic. Essentially, it is a misinterpreted missionary logic, precisely considering only growth but not development. The more missionary a church is the more it tends to compact itself. This is a historical and sociological law that leadership must be able to understand in order to suggest corrective paths. And this is why, at some point, historically-wise churches that want to move from quantitative to qualitative mission dare to temper missionary zeal with care for internal and external heterogeneity, diversity, and complexity. Churches that instead remain only on a quantitative plane, such as Adventism, succumb to the allure of identity monolithism and begin to view with distrust, malice, and rancor anything that seems to slow down mission. Here, however, mission is no longer free action, it has become compulsion.

Professors Daron Acemoglu of MIT and James A. Robinson of the University of Chicago address this in their book Why Nations Fail: The Origins of Power, Prosperity, and Poverty (2012). This is a title that we could paraphrase as "Why Churches Fail." Political, cultural, and religious systems owe their success not, as is usually believed, to their resources (territory, climate, culture, the guiding ideas behind the system) or even to individual leaders (enthusiasm, vision, discipline, work). Instead, it is the steadfastness and dynamism of their institutions. Institutions can be of two types. "Extractive" institutions favor monolithism and institutional compactness, the guarantee of rents for the benefit of a privileged minority, the monopoly of elites whose mission is the stability of the system's routine. In contrast, "inclusive" institutions are those that create internal alternatives, promote the human development of people by pushing them to think for themselves, and actually create a more complex and slower-to-manage situation. They tend to involve the majority of citizens by taking their proposals and criticisms seriously and increasing the flexibility of the state apparatus with a view to creating a true confrontation with civil society.

In their latest book, The Narrow Corridor: How Nations Struggle for Liberty (2019), Acemoglu and Robinson take up the biblical metaphor of a "narrow gate" (Matthew 7:13,14). They remind us that the institutional way does not immediately pay off. In fact, it requires greater sacrifices. It is an arduous path full of stumbling blocks. The road of firm institutionalism is a bottleneck because it is caught between two strong but warping temptations. Taking up Thomas Hobbes's old metaphor, the Leviathan, Acemoglu and Robinson describe three types of possible state institutions.

The first is the "Absent Leviathan," or absence of the state; and where there is a lack of power capable of imposing law, freedom is impossible. We find this sort of chaos in the tribal wars of archaic communities, as the tragedy of present-day Syria exemplifies. But freedom is also impossible in the opposite condition, that of the “Despotic Leviathan,” the second possible configuration of the state. Here we find the all-powerful state, like in Hitler’s Germany, Mao’s China, Latin American dictatorships, or Putin's Russia. The third alternative, favored by Acemoglu and Robinson, which they call the “Shackled Leviathan," is a state strong enough to impose law, accompanied by an equally strong civil society capable of preventing overreaching power. Because power inherently tends to expand, it is near-evitable that those who govern will want to increase areas over which their authority is exercised. To counter the authoritarian thrust of power, a check-and-balance system is the first condition, but it is not enough. Acemoglu and Robinson illustrate this from the Myth of Gilgamesh. Here Gilgamesh makes a deal with his rival Enkidu to share power. But the story teaches that it is easy for different organs of a state, intending to check each other, to end up leaning on each other instead. Therefore, the key element for freedom to arise is the presence of a civil society that is as strong as the state: a public opinion, an autonomous press, citizens’ associations capable of making their voices heard to the point of conditioning policy choices.

Will Wilson's strong presidency swallow up the intermediate bodies of Adventism and the differentiated mechanisms of plural management that are to serve as a counterweight? Will it increasingly resemble in its presidential stewardship a “Despotic Leviathan” or a “Shackled Leviathan” that allows itself to be challenged and constrained?

Despite all the comments made about Ted Wilson in this column, he is certainly not the core problem in Adventism today. While imputing to the president the embodiment of a euphoric and excessive "administrative and theological messianism," he actually acts according to his convictions and in response to what has been asked of him.

The problem of Adventism essentially does not even lie in the base, the members. They already do enough through their generosity and daily engagement in all latitudes of our world. And even if the Adventist base privileges militancy over spiritual wisdom, a greater balance between these two components of the faith experience is still possible.

The same thing unfortunately cannot be said of the leaders heading Adventist institutions in the various sectors and territories. Therein lies the greatest problem that is also dramatically emerging in this GC Session. This set of intermediate bodies seems to have disappeared. These bodies between the GC presidency and the membership base must be able to resist the messianic impetuosity of presidential initiatives. But their administrative subservience is both troubling and perplexing. And unfortunately, it is chronically entrenched.

Max Weber, in his well-known lecture on "Politics as a Vocation" (1919)[2]recalls the three virtues that every leader should embody. The fate of an institution cannot rest on a single individual, much less rest solely on his or her militancy, consistency, and conviction. To enthusiasm and conviction Weber adds responsibility and foresight. Responsibility—understood both morally and historically—balances militancy by giving more weight to the less visible elements of the process. Responsibility is not synonymous with ethical will but with a willingness to listen to the voice of history, which is not always clear and immediate. Foresight for Weber is the ability not only to know how to start something but to know how to embed accompanying processes to ensure space for future generations and their actions as well. It is not about just completing work today but building structure for that which will be completed tomorrow by actors other than ourselves. This is trust, in the transgenerational and historical sense, which allows us to understand that a process of "development" and not just "growth" is mandatory. Can this GC presidency change course, as Bruno Latour[3] hopes for the contemporary political system? It is difficult to say, mainly because of this “administrative messianism” that believes it must do, for the sake of consistency and historical responsibility, everything that can be done. But is this, in reality, administrative megalomania, theological obsession, historical compulsion? The future of Adventism will tell us.

[3]Bruno Latour, Down to Earth: Politics in the New Climatic Regime, (Cambridge: Polity, 2018).