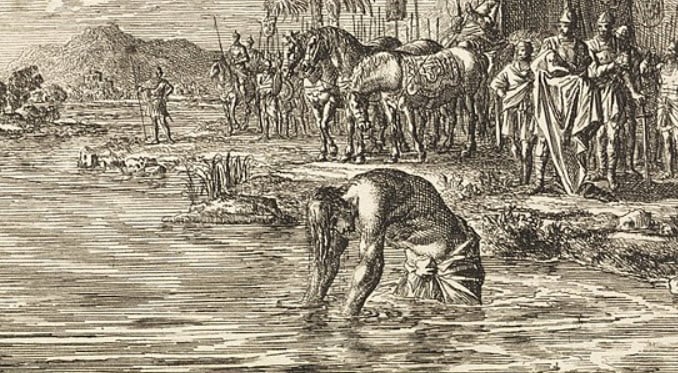 Those who are familiar with the Old Testament are likely also familiar with the story of Naaman. He was a foreign army commander who was stricken with leprosy. At the suggestion of his Israelite servant, Naaman went to Elisha the prophet for healing. Elisha told him to dip in the Jordan River seven times and he would be healed. He did so and was healed. This is a tremendous story with a multitude of lessons about faith, the willingness to do what God commands, and how those who love God should be willing to help all people, regardless of where they come from or what they believe. As a result of this healing Naaman became a believer in God. However, there is an element of this story that is overlooked by many Christians. In 2 Kings 5:17-18 Naaman says, “Your servant will never again make burnt offerings and sacrifices to any other god but the LORD. But may the LORD forgive your servant for this one thing: When my master enters the temple of Rimmon to bow down and he is leaning on my arm and I have to bow there also—when I bow down in the temple of Rimmon, may the LORD forgive your servant for this.” Elisha tells Naaman to “Go in peace,” giving Naaman the assurance that he will be absolved of the sin that Naaman knows he will be committing by bowing to another god.

This seems to be antithetical to current Christian ideology of what to do when we are in positions where we feel our consciences will be violated. In this situation, many of us would likely tell Naaman that he now has to quit his job. He cannot continue to put himself in a position where he knows that he will commit sin. To do so is to violate God’s law, and he will be punished in the judgment for this willing violation of a known and realized commandment. Moreover, even if he is faced with homelessness, banishment from his community, and even death, he is bound by conviction to stand up for what he believes. He must be willing to die for his belief in the 1st commandment. Anything less, we would argue, is to fall short of the high and holy standard that God established for each of us. This seems to be a convincing argument. There is only one problem. It is not congruent with the Bible, at least not in this instance. In Naaman’s case, he is allowed to continue to flagrantly violate the law of God, although he swore that he would no longer worship any god but the true God. This seems to have horrible ramifications. What about Naaman’s witness to the people of his country? What about all the people in the pagan temple that would see Naaman’s action and know he is a hypocrite? How dare Elisha absolve Naaman of his duty to be an upstanding witness for the Lord? But maybe Elisha knows something about God that we have yet to understand. Maybe God is seeing beyond our own myopic vision to a broader mission and a broader purpose for Naaman, one that would be ruined if Naaman were to be caught up in a controversy about bowing in a pagan temple. Maybe we should let Naaman and God figure it out between them.

We see analogies for Naaman’s situation all over. We question the song choices of artists who say that they are Christian. We question the morals of Christian lawyers who defend accused criminals. We opine on the status of anyone who is doing anything that we decided is outside of the will of God. I think we should take a lesson from the story of Naaman’s absolution. There are times when God will absolve those who know that they are about to do things that are not in line with their beliefs. Furthermore, because of God’s willingness to preemptively absolve people of their “sins,” how can we as outsiders really know when someone has violated the will of God at all? (Can we really even call them sins if they have been forgiven before they were committed?) Is it even our business? Unless God has come to any one of us specifically and told us that we must inject ourselves into someone else’s life and decisions, then I think we all should just mind our own business. That is the lesson I take from Naaman. I learned that I can hardly tell what God wants from me, let alone to presume that I can know what God wants from someone else. Besides, I have enough on my own plate to worry about. Paul counsels us to “continue to work out your salvation with fear and trembling…,” not to work out the salvation of others. We would do well to do what the Bible says.