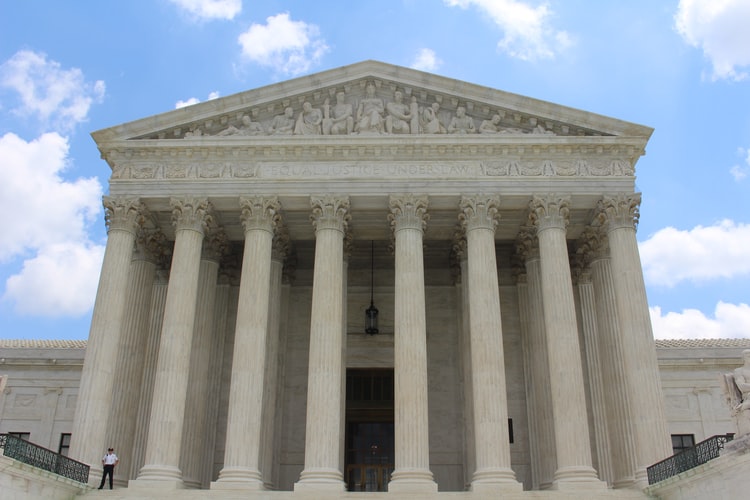 We are on the precipice of a judicial moment almost 50 years in the making. So the story goes, in response to Roe v. Wade, groups of Conservative evangelical Christians banded together to take a bigger role in American politics. (I say “so the story goes” because the actual story is that they banded together to oppose racial desegregation and chose abortion as a more socially palatable public-facing issue.) The most prominent outcome of this movement has been White Conservative Evangelicals as the most stable voting bloc of the modern Republican Party.[1] But this movement considered one of its most important goals to be the ideological reformation of the court system. They understood that, as the final arbiter of our democratic system, the party that controls the Court controls the ideological direction of the country.[2] For the last several decades the Court has been mostly conservative, but there remained enough liberal balance that the movement was unable to overturn Roe v. Wade and was unable to stop some liberal gains.[3]

All of this changed with the passing of Justice Ruth Bader Ginsburg last week Friday. In contravention of their own made-up rule, the Senate-controlling Republican Party in all likelihood will confirm a justice nominated by Donald Trump.[4] It seems that the nomination will be confirmed before the election but, even if it isn’t, it will surely be confirmed before the end of the year. If this nomination goes through, this will be the third Supreme Court justice confirmed by Trump, and will create a 6-3 conservative majority on the Court.

A 6-3 majority, especially the type of hard-line conservative justices Trump has appointed, could mean overturning several new and old precedents set by the Court. Most of these cases involve hard-won rights by minority groups. The nation could see Roe overturned. The newly-won right of same-sex marriage could be done away with, as well as more general protections for the LGBTQ community. The conservative wing of the court has shown a predilection to curtailing the expansion of voting rights in the past as well. We could also see the right against discrimination again become subservient to religious liberty, which could lead to an explosion of not only discrimination against the LGBTQ community, but even racial discrimination as well.

Many of these changes were among the goals the Religious Right had when this movement began almost 50 years ago. They stand a few months, maybe even just a few weeks, from possibly controlling the Supreme Court for a generation.[5] This nation will at least have the façade of Christianity that the Religious Right always wanted.

And it seems that the price was not all that high either. All they had to do was align themselves with an occupant in the White House who even they admit is flagrantly immoral. They did this after arguing for almost forty-five years that high, upstanding moral and Christian character was one of the most important things for a president to have. The very Supreme Court seat in question is being gained through hypocrisy and dishonest dealing. This after arguing that these are the abominable tactics of their opponents and these tactics are certainly not the modus operandi of the God they serve or the biblical heroes they admire. All they had to do was aid and abet racism, sexism, homophobia, and xenophobia, all while worshipping a God who grafted them into salvation and promoted a church in which there should be no division. All of this happened while their fellow citizens watched and wondered how people who say they serve a loving God, who promotes morals and values and work for a kingdom that is not of this world, could sacrifice it all for an extra Supreme Court seat. They watched – and decided that the Christian church was not a place they wanted to be if its members went about their “love” that way.

But I digress. Congratulations to the Conservative evangelical movement. You did it. The nation is about to become more of the Christian nation you want it to be. And all you had to do was drag Jesus through the mud to get there.

[1] This movement has gone by many different names in public parlance - originally as the New Christian Right, then as the Moral Majority, then the Religious Right, and now as White Conservative Evangelicals.

[2] Oddly enough, it seems that their opponents somehow forgot how important the courts were. I think what befell them befell many successful movements – after struggling to gain their victories they assumed the battle was over and they no longer needed to defend what they’d won.

[4] To be fair, this deserves an explanation. In 2016, after the death of Justice Antonin Scalia, the Senate, led by Republicans, refused to even consider a Court nomination from then President Obama. At that time the Republicans said: this close to an election (it was approximately 9 months before), the people should have a hand in deciding who should make the appointment. Justice Ginsburg passed less than two months before the election and the same Senate Republicans who said 9 months was too close are seeking to appoint a justice in less than two months. Now they say that the precedent is that when the Senate and the President are of the same party then you can fill the seat, but when they’re of different parties you shouldn’t. There are just two problems with this new line of thought. One, no one said this was the rule in 2016, and two, several Republicans were on the record saying if this exact situation happened in 2020 they shouldn’t fill the seat.

[5]I say possibly because there is also the possibility that the Republicans victory in this matter may be short-lived. If the result of the 2020 election is a unified government (with the legislative and executive branches both led by Democrats), it is possible that they could reform the Court to install a more liberal balance and the conservative majority may go almost as quickly as it came.