With Compliance Committees Demise, Are Unions Free to Ordain Women? 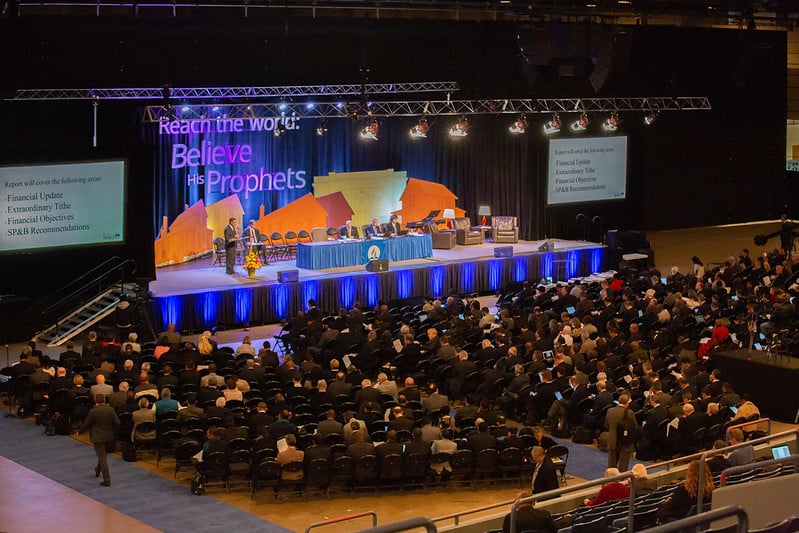 A distinctive characteristic of the Wilson leadership is the president’s penchant to embroil the church in protracted crises by advancing or highlighting polarizing policies. Particularly since the beginning of his second term, whenever Annual Council (AC) comes around, he engineers divisive ideological positions that pit different Adventist groups against each other. Having thoroughly exploited the unhappy differences between global Northern Adventists and their Southern “brethren” over the last several years especially on Women’s Ordination (WO), the president seems to have reversed course from last year’s “hard won” Compliance policy. But it is unclear whether this stops his uncompromising opposition to WO entirely or is just a tactical retreat in pursuit of a higher goal.

At this upcoming and last AC meeting preceding the 2020 General Conference (GC) session in Indianapolis, the president will ask global church leaders to weigh in on a brand-new draft document on abortion, which could then be forwarded to the Indianapolis delegates for further action. There are many problems with this move, but we’ll leave that for another time. Still, as with WO, abortion is a non “fundamental belief” that is being pushed to the forefront just before a GC session. It could be that the church needs a fresh look at its long-standing Abortion Guidelines, but is now the time to take this up? Why has the perennially contentious abortion issue suddenly leapfrogged all other considerations to the top of this year’s AC agenda? Speculations abound, with some unfortunately pointing to poorly disguised political calculations.

Why, for example, are we discussing abortion instead of hermeneutics? What is the status of the Hermeneutics project which was officially referred to the Biblical Research Institute (BRI) in San Antonio four years ago? This assignment grew out of the bitter WO vote but for four years there has been no interim public reporting on the committee’s work, at least none that I’m aware of. It is possible that the assignment is completed and the BRI has decided that secrecy serves the church better, thus opting against providing updates to the church public. If so, it is a sad commentary on the current state of theological development because an open church should not dialogue about its beliefs in secret. I find no justification for secrecy in the process of clarifying our doctrines, and not by a committee that has presumably been at this task for four years.

The news that the GC Administrative Committee (ADCOM) has decided to shelve the whole Compliance Committees (CC) policy, which was approved after much rancor last year, was both predictable and surprising. It was predictable because, as many critics pointed out when the idea first surfaced, there was little chance the committees, as conceived, could work without attracting inquisition comparisons. And not a single committee on any level of church governance worldwide has met since they became operational. This suggests a policy adrift and in search of direction.

The surprise was the hubristic “boldness” of ADCOM in jettisoning a proposal that many on their committee, the president included, defended vigorously just a year before. Then, with tons of supporting Bible quotations, they claimed the CCs were an appropriate thought-through answer to leaders who ignore voted GC session actions. But in reality this was a boldness suggestive of complacency. Because the ADCOM members do not need to worry about incurring any consequences for playing both sides. Even more disquieting is the possibility that they are counting on members’ collective apathy or even amnesia. It is not by accident that the announcement axing the CC was paired with news from the same ADCOM that AC delegates would also deliberate on the church’s Abortion Guidelines. It is a classic distraction ploy: in this case, to a hot button topic that would use all the available oxygen. But we should not fall for this distraction if we consider the sequences of actions championed by the Wilson administration that got us here. So a quick review of the events leading to the recent reversal is helpful to provide context.

After San Antonio, Elder Wilson somehow seemed surprised, even offended, that the Unions who previously ordained women pastors did not capitulate or concede defeat and stop their inclusive ordination practices. Actions he subsequently took showed that he completely misjudged and in some sense misunderstood the “offending” Unions’ motivations for ordaining both genders. For while the Unions argued that male-only ordination is discriminatory, the president viewed the conflict through the lens of tradition and sought to outlaw it politically.

In the months leading to the 2016 AC, Elder Wilson devised an ill-conceived plan for the GC to “take over” the “obstinate” Unions, but cooler heads would talk him out of it. Still, in a face-saving move, the president insisted on giving the Unions a “year of grace” to come around, thus guaranteeing the church would deal with this issue the next year. As is typical with Adventist administrators during times of conflict, a committee (this one aptly named “Unity Oversight”) was formed, with Elder Tom Lemon as chair. The committee was charged with facilitating an understanding between the mostly women-ordaining European and American Unions and the GC leadership.

At the 2017 AC, Tom Lemon reported that while there was no breakthrough in their discussions (meaning the women-ordaining Unions did not agree to acquiesce to the GC position), he found no truth to the charge by some GC officials that some Union leaders were in rebellion. After this candor President Wilson would relieve Elder Lemon of his committee chair, replacing him with Wilson’s likeminded lieutenant.

It was also at this meeting that the African delegation, until then dependable supporters of the president’s men-only ordination policy, balked when the term “non-compliance” found broader applications. General Conference auditors had earlier revealed that 81% of global church entities were “out of compliance” with their “books.” This was euphemism for financial inappropriateness, which many concluded carried dangerous implications. The African contingents, realizing that supporting a “non-compliance” policy so broadly defined would cause them unwanted scrutiny, voted against the president’s interests.

It was also at this same conference that the president proposed church leaders should sign loyalty pledges and those refusing be denied “voice and vote”.  It was a dizzying week of high church politics but, when it was over, this attempt to wrest power from the Unions went down in defeat, thanks largely to African leadership defection from President Wilson.

But with this president, no defeat was final. He always seemed to have another year to try again. Though it seems like ages ago, that next time was only last year, in Battle Creek, MI. The president, with the African contingent mollified and in-toe, gathered his troops to produce a strange victory. For the first time in our denomination’s history we had Compliance Committees, a nebulously defined group to be embedded throughout church administrative structure to enforce GC orthodoxy. President Wilson had succeeded: his opposition went home to await the expected summons.

But for a year, the summons never came. And then a cryptic statement from GC-ADCOM arrived – announcing the suspension of the stillborn committees – but with no explanations. Was that the plan all along? That the president wanted a victory, and didn’t care what form it took? And, having gotten it, realized its pyrrhic nature? Or the real reason could be as simple as not finding people willing to serve on these committees. Last year when this started, the various committees at the GC level were peopled by individuals who were not informed about their roles, causing a small backlash. So it is conceivable that after a year of failing to get the GC-level CC going, the president just threw in the towel. Or it could be something else, like a part of a larger strategy to “soften” the president’s battered image in preparation for an election push for a third five-year term. Even now there is still considerable unease about what the president’s real motivations are for folding the CC. Would he pull another rabbit out of his many hats that would undercut this apparent concession?

Ten years ago Wilson worried that then President Jan Paulsen, 70, might consider a third term. He was skeptical of a 70-year old running the Adventist ship of state. Now it is President Wilson who is 70 with two five-year terms of presidential leadership under his belt. Has he changed his mind about 70-year-olds in charge of the “grueling” demands of the presidency having become comfortable with the perks of office? If this uncharacteristic flip-flop is a calculated re-election tactic, then he has to answer why the same person who pushed for the CC just a year ago but now wants it quietly annulled, should be trusted with making constructive policies going forward.

However we view this, the past four years of President Wilson’s second term has been a monumental waste – of resources, time and reputations. How much money has the church sunk into his serial misadventures? How many people-hours have been spent by church leaders defending his discriminatory policies? How many leaders have been let go or their reputations besmirched for refusing to endorse discrimination?

From the onset it was obvious to all who looked beneath the surface, and many did, that his proposal to police religious thought was doomed. It was too impractical, too secretive, too ethically challenged. Yet there were many who, for unfathomable reasons other than maybe being victims of their own fears, cheered him on. And now they want to drop the whole thing with little fanfare. This much we know. If we don’t hold our leaders accountable for such manufactured failures, they will continue on the same path.

There’s now no doubt we should never have voted this shameful policy into existence. But we did, manipulated or not. The question is, what do we do now? Certainly not what the administration is attempting to do – by pretending that the CC debacle never happened, while counting on our collective inattention. They can pretend all they want, but at some point we should put an end to these self-serving behaviors by instituting deterrence, painful enough to dissuade, together with a public price that checks impulsive presidential mishaps. And there is none more powerful than signaling to President Wilson, that ten years at the helm of our beloved church is enough.

In the silly-season months before Indianapolis, we should insist on logic in our deliberations. Since he now concedes that the CC was a bad idea, there should be additional multiple corresponding concessions to several issues that were sequels to the CC. It should be acknowledged and addressed that: Unions have the sole authority to determine ministerial hiring policies, not the GC; San Antonio was an orchestrated mistake; Women, like men, should be ordained by uniform criteria. For, if the solution (CC) for an infraction (ordaining women) is rescinded because its proponent (GC-ADCOM) now concedes it erred, then we should return to the status quo (Unions preferentially ordaining women) that necessitated the search for the solution (CC) in the first place.

We should recognize our situation for what it is: our church under Wilson’s leadership is moribund; stuck in one man’s obsessive discriminatory ordination quagmire that has stymied the Lord’s work. Issues such as tithe-parity, abortion politics and CCs consuming the church’s attention are simply outgrowths and reactions to our ordination policy impasse. The WO dilemma has always been about discrimination. It is time for our leaders to actually lead and extricate the church from these self-inflicted embarrassments.

Compliance Committees Out and Other Reversals as Annual Council Agenda Takes Shape by Bonnie Dwyer, September 4, 2019