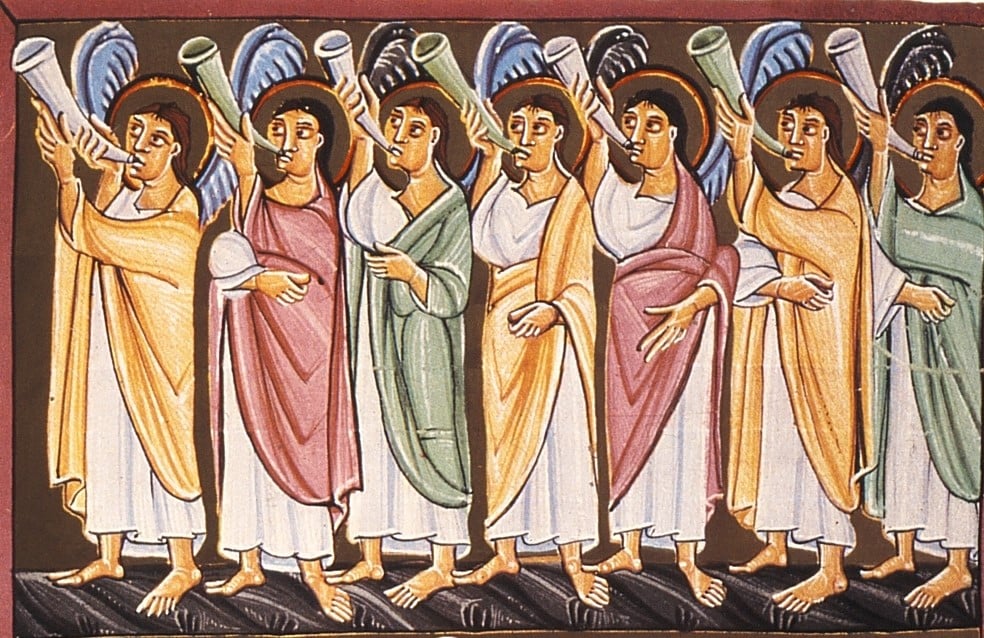 On the weekend, Spectrum received a submission from a PhD student in Brazil who had written a blog post on last week’s topic in Portuguese, and we are presenting the author’s translation here.

Given the lesson of the Sabbath School this week, I present a partial result of a research I am developing on the Seventh-day Adventist interpretations of prophetic themes still surrounded with great uncertainty (e.g. Dan 11, Rev 7–9, 17–18), or texts that have multiple interpretations among respected scholars in Adventism. Here, I limit myself to only the views of the seven trumpets of Revelation.

It is important to note that the lesson only exposes, in a short paragraph (on Monday), the historical interpretation of the sequence of apocalyptic symbols with the observation that the trumpets “apply approximately to the same period of the seven churches and the seven seals.” Here, the Sabbath School lesson presents only one interpretation of the various propagated, and as noted in the comments below, it is a more recent opinion in Adventism.

Noteworthy is the fact that, although Ranko Stefanovic is the main contributor to the quarterly, the view of the trumpets reported in the lesson is found in his commentary on the book of Revelation. This discrepancy occurs elsewhere, and as already noted by other articles in Spectrum this is due to the editorial process of the Sabbath School Lesson in the General Conference.

Below, in the discussion about the seven trumpets, I limit myself to only two ways of interpreting the apocalyptic symbolism in Adventist literature. A future article I am preparing will give more detail on the nuances of this story. Here, I go forward with the most relevant partial conclusions related to the seven trumpets. 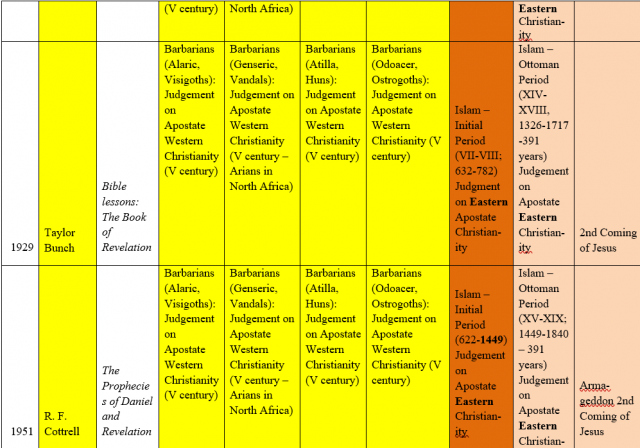 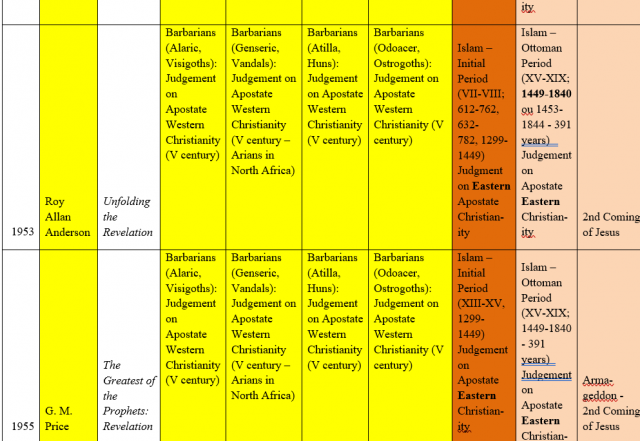 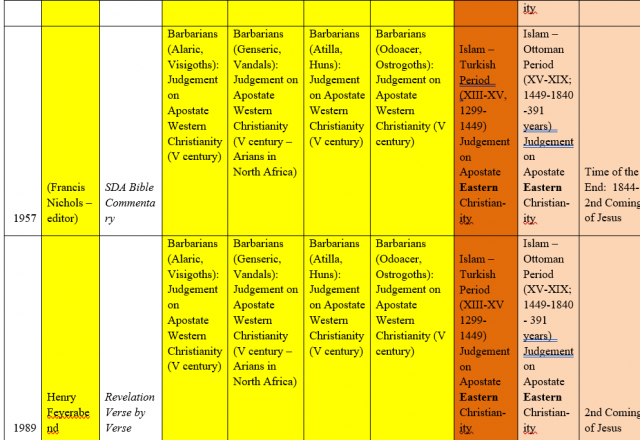 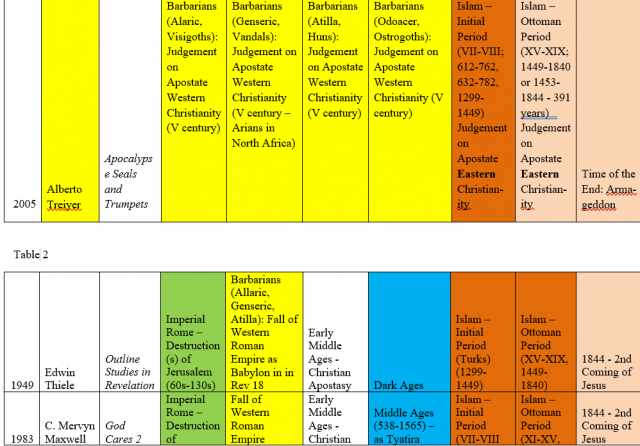 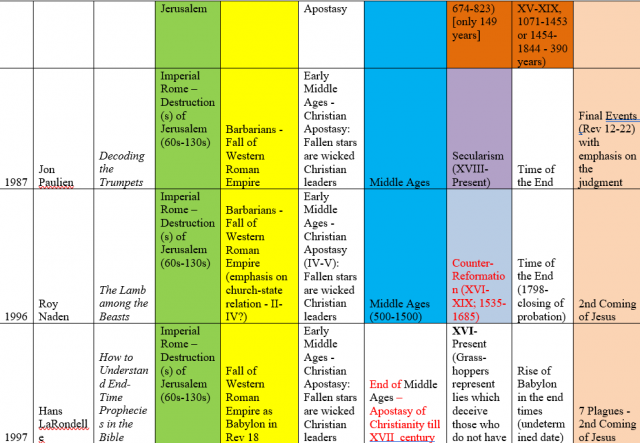 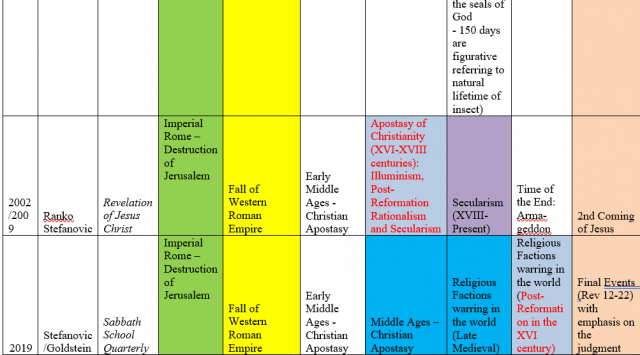 The first table shows the oldest interpretation I found in Adventist literature and possibly the most accepted until the mid-1950s. According to LeRoy Edwin Froom in his Prophetic Faith of Our Fathers (1950s), this is the traditional interpretation of Seventh-day Adventism. This version was modified in the 1940s by the Edwin Thiele, professor of the Theological Seminary at Andrews University.

Comparing the two tables (attached) it is clear that the final trumpet ends with the second coming of Jesus. But, as the book of Revelation itself is not so clear where the seventh trumpet sounds (starts), the details of these interpretations are interpreted quite differently. Some suggest an early date (1844) as a starting point, others report no dates at all.

The most striking difference is found in the interpretation of trumpets one to six.

Regarding trumpets one to four, we can distinguish two groups:

A)    Specifics: Every trumpet is a tribe of barbarians who destroy pagan Rome—Alaric, Genseric, Attila and Odoacer (Trumpets are Judgment in Western Europe).

Ranko Stefanovic is peculiar in the second group of interpreters since he extends the time of the third Trumpet until the fifteenth century when the first group (specifics) puts that date only on trumpet six and the Generalizers on trumpet four.

With regard to trumpets five and six, we find:

B)  Generalizers: Some continued the Islamic interpretation (Thiele and Maxwell) proposed by the pioneers. Most, however, see the trumpets five and six as representing anti-Christian powers, such as secularism and atheism, starting from about the Protestant Reformation to the end time. As they do not apply the year-day principle to the times of these trumpets, there is no attempt to mark dates.

I noticed in my research that Edwin Thiele is probably the most influential Adventist author in this change of paradigm in Adventist prophetic interpretation. This is also seen elsewhere (e.g. Dan 11, Rev 17). It is only after his interpretation, in the 1950s, that the previous position weakens with few still holding it in the ’80s. However, his interpretation of the Trumpets is not followed in every detail by later interpreters. This is clearly seen in the case of the fifth and sixth trumpets. What it is clear, is that after Thiele, a group of scholars I call the generalizers, no longer apply the year-day principle to the times mentioned in these passages. This has opened doors for reading the trumpets as divine judgments to Christianity as a whole, unlike a more specific application in history to religious institutions. Ideologies such as secularism or atheism became the explanation for the evil portrayed in the Trumpets.

Another important development that I see is about the meaning of trumpets as a whole in relation to the seven seals. Most Adventist interpreters see the seals as a description of the persecution suffered by Christians and the trumpets representing a divine response to the prayers of the persecuted. This view of the trumpets’ function is drastically modified by those who see secularism in Trumpets four and five. In this case, the trumpets and secularism would function not as a divine judgment against the persecutors of the faithful, but a satanic attack on God’s truth and its followers. Another problem I see with the latest perspective is the inconsistency in applying the year-day principle in the book of Revelation. There are other important details I’m preparing for a future publication.

I conclude, only pointing to the fact that the Seventh-day Adventist Church has no official position on many unique and prophetic portions such as Daniel 11, Revelation 7–9 and 18. Although only one position appears in the Sabbath School lesson, this does not indicate a single view in Adventism. We must continue studying the prophecies always showing friendliness to our colleagues who disagree with our opinions. If we thus continue, we will avoid the danger of complacency that can cause lack of preparation required for the return of Jesus, the central theme of the book of Revelation.

[1]   Stars are interpreted as the spiritual leaders of Christianity in the light of Revelation 1–3.

Rodrigo Galiza is a PhD student at the Adventist Theological Seminary in Brazil.