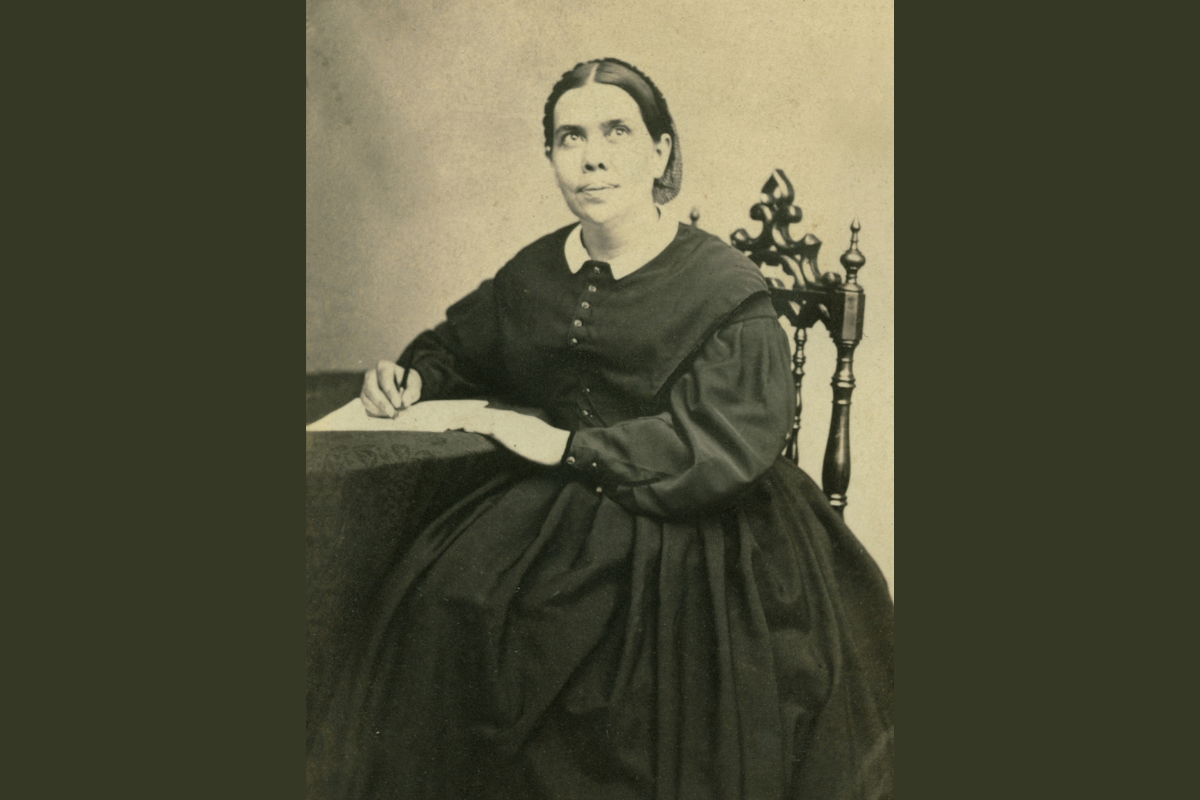 Though the 13th Amendment in 1865 made slavery illegal in the United States, Ellen White recognized that the guiding principles of the slave system — principles that “proceed from the dominion of Satan” remained and would take new and pernicious forms. On December 25, 1865, in Rochester, New York, she not only received another major vision on health reform but was also shown that, despite her forceful testimony in 1863, pockets of anti-black politics remained active in post-Civil War Adventism.

“Many Sabbath-keepers are not right before God in their political views,” she wrote in Testimony No. 12, published in 1867. So long as they persisted in “erroneous political principles… not in accordance with the spirit of truth” they would be “living in violation of the principles of Heaven.” Living in sin because of their political views! How so? “These brethren cannot receive the approval of Heaven while they lack sympathy for the oppressed colored race, and are at variance with the pure, republican principles of our government.”[1]

The Reconstruction era after the Civil War initiated remarkable advances for “republican principles.” Constitutional amendments established equal citizenship for the freedpeople (14th) and the right to vote for freedmen (15th). Civil Rights Acts in 1866 and 1875 spelled out equality before the law. Reconstituted state governments in the South solidified civil rights and set up free public school systems, among other progressive reforms. By 1876, fourteen African Americans had been elected to the United States Congress, two more served in the Senate, and hundreds of others were elected to office at every level of state and local government. It was “a stunning and unprecedented experiment in interracial democracy,” writes historian Eric Foner.[2]

Discussion of racial justice receded but did not disappear from Adventist publications during the Reconstruction era. Joseph H. Waggoner, with only an oblique reference to the issue in an 1880 Signs of the Times editorial, stirred a minor dust-up — long forgotten but worth recalling mainly for a letter it prompted from Ellen White. This letter was never included or excerpted in a printed publication.

By 1880, the experiment in interracial democracy, beleaguered all along, was slowly reeling from what proved to be a knockout blow — the infamous Compromise of 1877. The Republican presidential candidate in 1876, Rutherford B. Hayes, was awarded disputed electoral votes from three Southern states that gave him the presidency. In exchange, the Republicans agreed to step back from federal enforcement of Black rights in the South, opening the way for white supremacist Democrats to regain control of the Southern states.

The Compromise did not immediately crush Southern Black political prospects. The southern Democrats had pledged that if left alone from Northern interference they would respect Black rights. And, when Waggoner’s editorial “Politics” appeared in the July 8, 1880 issue of Signs, the Republicans had just nominated, on the 36th ballot, James A. Garfield, known as an advocate for Black rights.[3]

“We are not politicians,” Waggoner declared in opening his piece, and then proceeded to discuss why Adventists tended to take sides on some disputed political issues. Scripture (Hebrews 13:3) “compelled us to sympathize with the action of our government in breaking every yoke and letting the oppressed go free,” he explained. Those who criticized that stance, he contended, viewed the matter “only as a political question,” failing to see that Adventists cared about racial oppression because of “its great importance as a moral question.” In fact, Waggoner proclaimed, Adventists “have high regard for all moral issues.” He also let it be known that “we shall never violate our moral convictions… to appease the feelings of those who often appear to be moved more by prejudice than by revelation or the calls of our common humanity.”

Moral conviction, informed by Scripture, motivated Adventists to speak out and stand firm on certain issues contested in the political arena, Waggoner seemed to be saying. But: “We cannot consent to enter the arena of politics, and strive as the world strives for supremacy and power.”[4]

A member of the Woodland, California church who took umbrage with Waggoner for taking political sides in a denominational publication, complained to Ellen White about it. After reading Waggoner’s piece twice, she came to the editor’s defense.[5] It turned out that “many who profess the faith at Woodland” cherished “peculiar, political sentiments” similar to those that her testimonies had spoken “decidedly and positively” against thirteen years before. In response she reiterated that “if men and women have embraced the solemn truth for these last days that sanctifies the soul, the old political sentiments that sustain the old system of slavery will be, before they are translated, purged from them.”

A somewhat cryptic statement to the effect that “every species of slavery” conflicts with the word of God suggests that this was more than a rehash of Civil War debates over chattel slavery. Ellen White seems to have in view new forms of enslavement developing in the post-Reconstruction South.[6] No specifics are given and the letter from the Woodland church has not been preserved. But the timing — a presidential election season in which Black rights were a prominent issue — adds to the probability that current political interests were at stake.

Like Waggoner, Ellen White made a distinction between what Adventists should and should not do in connection with politics: “While we do not and will not dabble in politics, we will be colaborers with Jesus Christ.” Though Ellen White in this brief letter does not develop her points in a systematic, linear way, the letter as a whole makes clear that her affirmation of being a “colaborer with Jesus Christ” parallels and illumines Waggoner’s affirmation of speaking out on “moral issues.” The positive counterpart to “dabbling in politics” is not a retreat into an individualistic “spiritual” bubble, insulated from controversial public issues. Rather, it is to use “our pens and voices” on behalf of “principles of justice and righteousness” and not being dissuaded by the “spirit of bigotry” that inevitably will arise in opposition.

This reading of the Woodland church letter alongside of Waggoner’s editorial also sheds light on a passage published decades later that (along with a similar passage in Desire of Ages, p. 509) is frequently used to slam the door against political engagement on the part of Adventists:

Again and again Christ had been asked to decide legal and political questions. But He refused to interfere in temporal matters. He knew that in the political world there were iniquitous proceedings and great tyranny. But His only exposure of these was the proclamation of Bible truth. To the great multitudes that thronged His steps He presented the pure, holy principles of the law of God and spoke of the blessing found in obeying these principles. With authority from on high He enforced the importance of justice and mercy. But He refused to become entangled in personal disputes.[7]

Politics as instrument of power and control — No. Politics as exposing tyranny and political iniquity, speaking out with forceful clarity on issues of justice and mercy — Yes.

Two guideposts from Ellen White’s counsel thus come into sharper focus. First, those who speak under the banner of the Adventist Church cannot “dabble in politics.” The Church’s message and mission require a free agency under God that must not be compromised or corrupted by entanglements with political parties or other partisan interests. Second, Adventist faith should not be silent about injustice, exploitation, and inhumanity, even if advocacy for legislative or public policy changes stirs political opposition.

Ellen White abruptly concluded her letter to the concerned “Brethren and Sisters at Woodland” with a rhetorical question: “Why not cut out of your Bibles, when Christ refers to His work, ‘The Spirit of the Lord God is upon Me, because He hath anointed Me to preach good tidings unto the meek; he hath sent me to bind up the brokenhearted, to proclaim liberty to the captives, and the opening of the prison to them that are bound’ (Isaiah 61:1)?”

But did Ellen White herself continue to give this passage prominence in her canon twenty years later, when white supremacy gained full dominance over the South and a tide of racism swept the nation? Or did she compromise with quietism and sellout to segregation? A look at those questions in Part III.

Note: Video presentations corresponding to this series of articles may be found on the blacksdahistory.org YouTube channel.

[4] “Politics,” Signs of the Times, July 8, 1880, 298. The concerned believers might also have been irritated by Waggoner’s positive, albeit very general praise for Garfield’s personal qualities in an editorial commentary on the same page under the title “The Presidency and the Church.”

[6] On her later observations in this regard, see Delbert W. Baker, “The Race War Question: Its Relevance Today,” and “Race War Predictions Reach Fulfillment,” Adventist Review, Jan. 16 and 23, 1986.