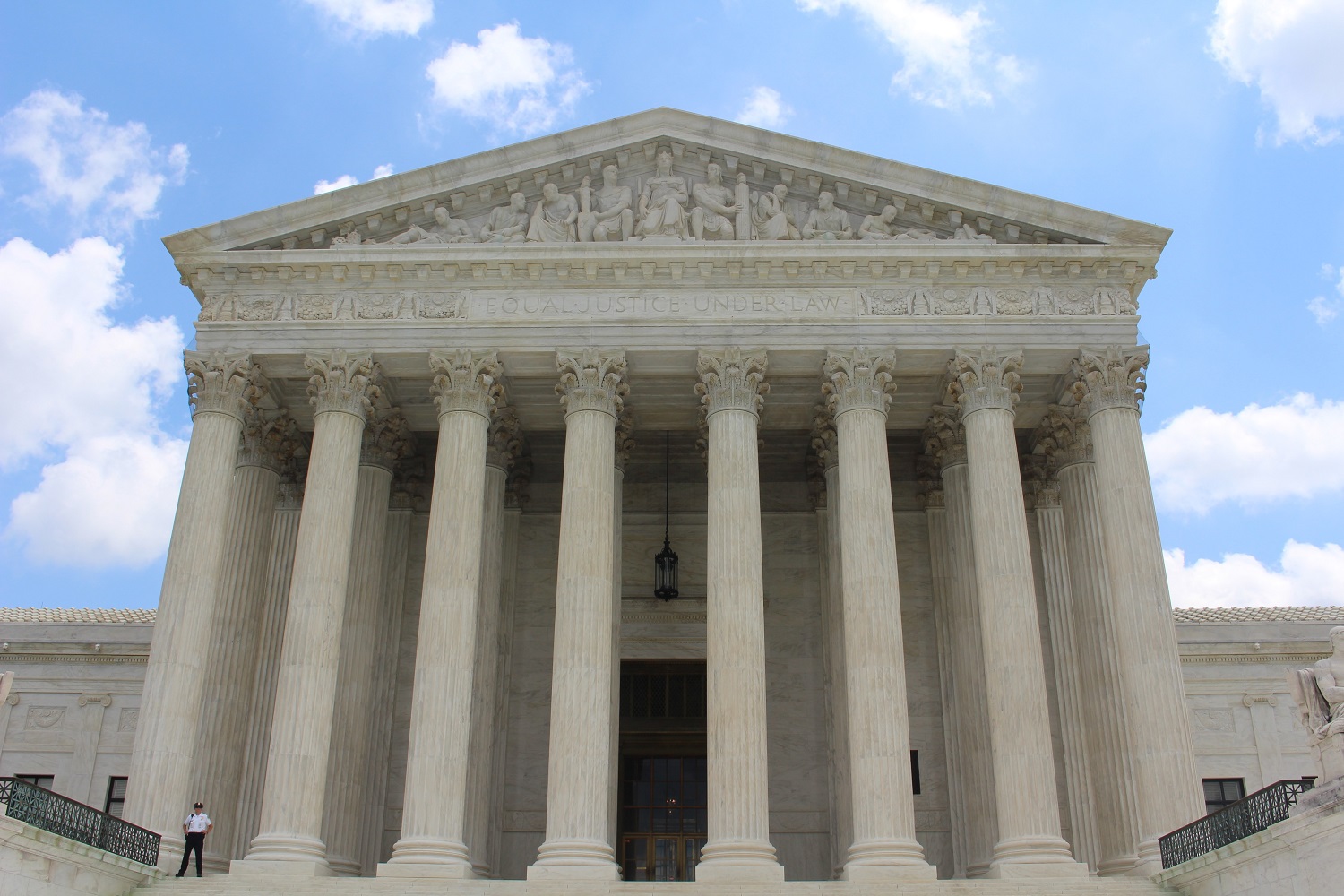 Editor’s Note: This article was originally published by ReligiousLiberty.TV on October 3, 2019, and is reprinted here with permission.

Author’s Note: Since the below article was posted on October 3, 2019, the next day the U.S. Supreme Court agreed to hear a challenge to a Louisiana law that requires doctors performing abortions to have admitting privileges in nearby hospitals. This may change the impact of the Hellerstedt (2016) decision described below.

This is intended to be a legal primer on the abortion issue as it is addressed before the courts, not to address the moral and/or religious issues that are involved.

This week, federal courts in Virginia and Georgia weighed in on state-level abortion restrictions. On September 30, a Virginia federal district court found that state regulations that required that first trimester and non-surgical second-trimester abortions, up to the point of viability, be provided in outpatient surgical hospitals presented a "substantial obstacle" and "impose an undue burden" on that right in violation of the Due Process Clause of the Fourteenth Amendment. Falls Church Medical Center, LLC v. Oliver, (ED VA, Sept. 30, 2019). The Court wrote that "evidence of the heightened potential for complications" warrant the requirement that surgical abortions during the second trimester should be performed in hospitals. (The court defined surgical abortions as requiring an incision into the body while aspiration and medication abortions are non-surgical.)

The court found that Virginia's mandatory ultrasound and waiting period and informed consent laws do not present a substantial obstacle to abortion care. The court further found that while it may be burdensome, it is not unreasonable to subject abortion clinics to biennial inspections.

The next day, a Georgia federal district court blocked enforcement of a Georgia statute that prohibited abortions after detection of a fetal heartbeat based on the Supreme Court decision in Roe v. Wade that a state may not ban abortion before viability. SisterSong Women of Color Reproductive Justice Collective v. Kemp, (ND GA, Oct. 1, 2019).

While Roe v. Wade is arguably the best known Supreme Court decision, the decision only addresses when state laws can limit the ability to restrict abortion. Overturning Roe v. Wade would not affect states such as New York, which recently expanded abortion rights to the entirety of pregnancy, but would allow states to restrict abortions.

Roe v. Wade (1973) struck down a Texas law that had banned abortion, and the Court instituted a trimester framework as a guideline for deciding when a fetus became viable. Under Roe, no state could regulate abortion during the first trimester. During the second trimester, a state could require reasonable health regulations. During the third-trimester abortions could be prohibited entirely so long as the laws contain exceptions for cases when they are necessary to save the life or the health of the mother. The Court declared that abortion was a "fundamental" right and that limits were subject to "strict scrutiny," — the highest level of judicial review. 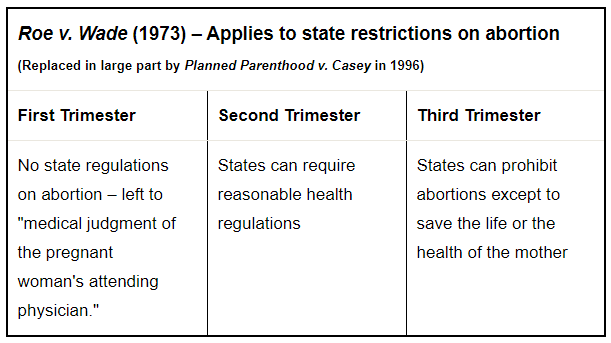 The Supreme Court revisited Roe in the case of Planned Parenthood v. Casey (1992). In Casey, the Court held that having an abortion is constitutionally protected but changed from the trimester framework to a new standard based on "fetal viability." The Court also abandoned the "strict scrutiny" standard, replacing it with an "undue burden" statute. Under Casey, state restrictions on abortion are unconstitutional if they are enacted "for the purpose or effect of placing a substantial obstacle in the path of a woman seeking an abortion of a non-viable fetus."

The Casey Court noted that advances in medical technology had proven that a fetus could be considered viable at 23 or 24 weeks instead of at the 28-week mark identified in Roe. The Casey Court said that over time, a state's interest in the life of the fetus could increase. The Court also found that parental consent, informed consent, and waiting period laws were constitutional while spousal notice requirements were unconstitutional. 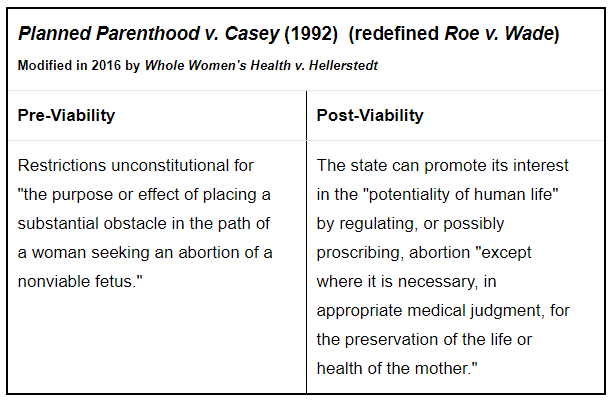 Under Casey, the point of viability is the key, and the right to abort a pre-viability fetus cannot be outlawed, but states can provide regulations so long as they do not present a "substantial obstacle." The Virginia and Georgia decisions this week are in line with Casey.

The Supreme Court revisited Casey in Whole Women's Health v. Hellerstedt (2016) and ruled 5-3 that if a state imposes a regulation, the state must show that the regulation actually meets the claimed rationale for the restriction. The case involved a Texas law that required any physician performing an abortion to have hospital admitting privileges at a hospital within 30 miles and that all abortion clinics comply with the requirements of ambulatory surgical centers. A group of abortion doctors sued because they said these were unreasonable and unnecessary standards. The Supreme Court agreed that Texas had produced evidence sufficient to demonstrate that the regulations did convey actual medical benefits that surpassed the burden on abortion providers.

On October 4, 2019, the Supreme Court agreed to revisit the same (or very similar) issue that was raised in Hellerstedt in the case of June Medical Services LLC v. Gee. The question before the Court is framed by the petitioners who opposed the Louisiana law as, "Whether the U.S. Court of Appeals for the 5th Circuit's decision upholding Louisiana's law requiring physicians who perform abortions to have admitting privileges at a local hospital conflicts with the Supreme Court's binding precedent in Whole Woman's Health v. Hellerstedt."

The Court has changed significantly since Hellerstedt was heard in the "window period" between the death of Antonin Scalia and the 2016 Presidential election. Since then, two new justices, Justice Gorsuch and Justice Kavanaugh, have been added to the bench. The state of Louisiana has admitted that the law is virtually identical to the Texas law, but the Court has agreed to visit the issue again as the state of Louisiana has also claimed some small differences. The case also adds the issue of whether doctors have the right to sue on behalf of patients.

At the state level, there are several trends to watch in abortion law. States that want to restrict abortion are likely to continue to argue for earlier points of "viability" based on Casey's recognition that states have an interest in the "potentiality of human life" and can regulate or even outlaw abortion post-viability except when it comes to the preservation of the life or the health of the mother. (The terms "viability" and "health" are somewhat vague, so the Supreme Court may take up a case that will define these terms more clearly.)

The other trend is that states that have unrestrictive abortion laws, such as New York, could face challenges that their statutes violate the human rights of the unborn fetus, under the theory of "personhood." Justice Harry Blackmun, in the majority opinion in Roe, wrote that "If this suggestion of personhood is established [Roe's] case, of course, collapses, for the fetus' right to life would then be guaranteed specifically by the [14th] Amendment."

Finally, there is the constitutional issue of whether states that have no restrictions on abortion can require medical facilities or individuals with moral or religious qualms to perform abortion procedures. With hundreds of Catholic hospitals across the nation refusing to participate in abortions and with Adventists revisiting the issue of abortion in their affiliated healthcare institutions, as well as individual medical providers' concerns, the availability of abortions is going to be an increasingly contentious issue. This will be felt particularly in rural communities and in unrestrictive states facing a dramatic decrease in the number of abortion providers.

Funding of abortions will also be a major issue as the U.S. Congress passed the Hyde Amendment in 1976 that prohibited the federal government from paying for abortions except for cases involving rape, incest, or the life of the mother was at risk. A majority of states also have state-level versions of the Hyde Amendment.

The Pew Research Center has been polling the American public on the issue of abortion for decades and as of this writing, states that "more than half of U.S. adults take a non-absolutist position, saying that in most — but not all — cases, abortion should be legal (34%) or illegal (26%). Fewer take the position that in all cases abortion should be either legal (27%) or illegal (12%)."

So far, the federal courts are working within the framework of Casey and Hellerstedt on the "demand" side of the abortion equation in restrictive states, but the issue of the moral rights of healthcare institutions and workers not to participate in abortion in violation of their conscience remains unsettled. From a religious liberty perspective, the pressure on faith-based health care institutions is expected to increase in unrestrictive states, and they should consider how they will respond to this issue in light of their morals and/or religious beliefs and the corresponding end-of-life issues involving assisted suicide and euthanasia and draft appropriate guidelines that will allow them to continue to fulfill their faith-based missions.

Photo by Claire Anderson on Unsplash

“Our Abortion Guidelines Are Too Good to Replace” by David Larson, September 16, 2019