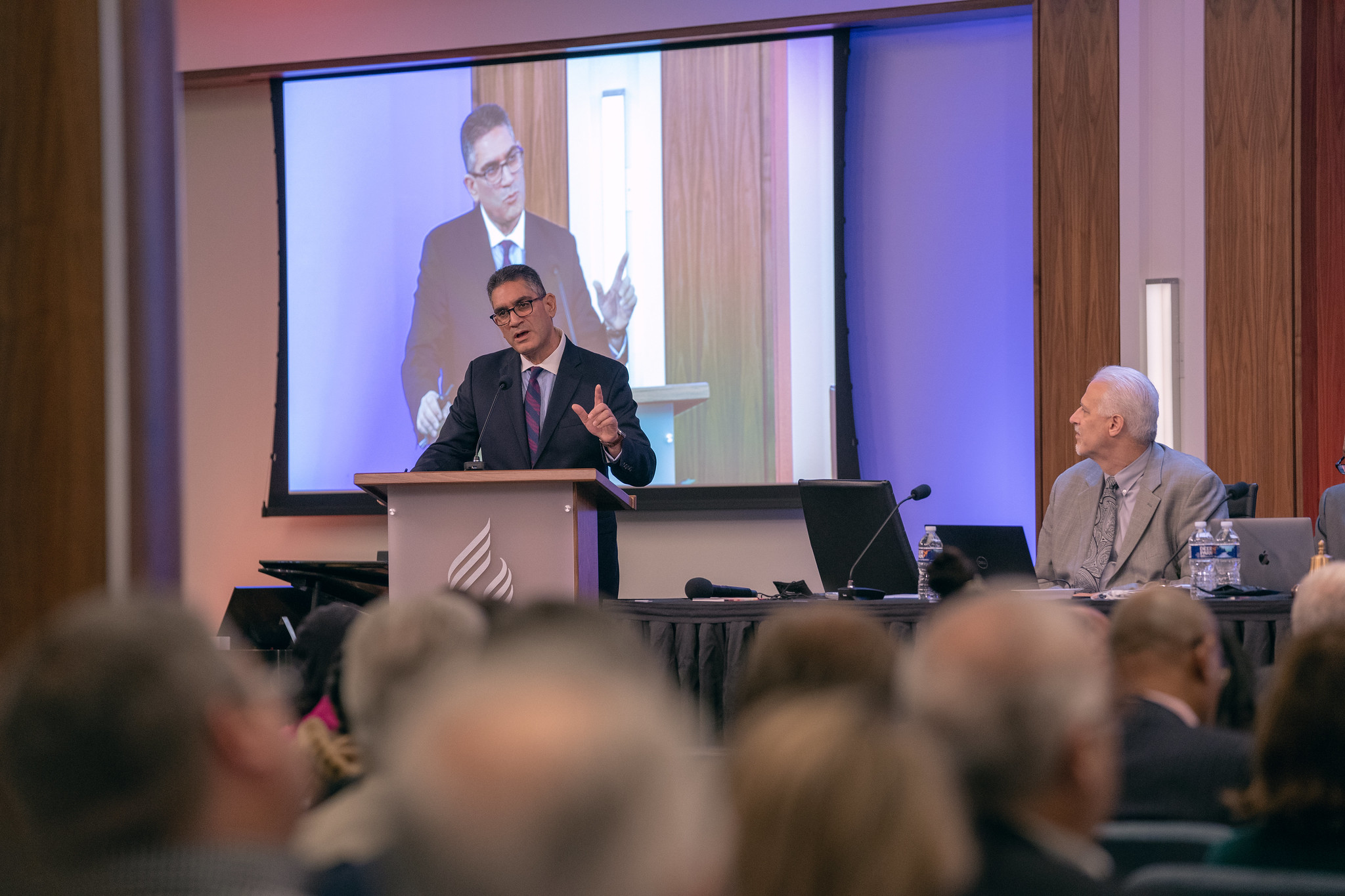 The North American Division Year-end Meetings wrapped up on Tuesday, November 5, 2019, with two dozen or so reports shared with the delegates.

The bulk of the morning was spent on discussion surrounding changes to the Adventist Retirement Plan for church employees in North America. Ray Jimenez, plan administrator and associate treasurer for Adventist Retirement, first went through the many changes that have occurred to the plan over the years, before sharing the latest proposed changes. These changes affect the health care assistance portion of the plan. Currently, the more years of service an individual has to the church, the higher the total annual contribution the person receives toward healthcare assistance. If you have 15-19 years, you receive $1,440 annually, on up to $2,400 for 35+ years of service. (Employees with less than 15 years of service are not eligible for healthcare assistance).

The proposed change, titled Option A in the presentation, would see the following changes:

• No joint and survivor benefits for those not vested prior to January 1, 2020

After lengthy discussion, a motion was made to amend the proposed January 1 date to July 1 because teacher contracts are on a July 1 start date. The amendment passed with 167 in favor, 14 against, and three abstentions. The motion to “adopt the recommendation of the NAD Retirement Office (Option A) beginning July 1, 2020” was then voted and passed with 164 in favor, 29 against, and two abstentions.

Next, Kim Johnson from Sterling Volunteers presented. Sterling (previously named Verified Volunteers) is the volunteer background screening platform used by Adventist church entities in North America. Johnson shared that 28,360 individuals were screened in the past year, and of those five sex offenders were uncovered, 74 violent offenses were found, and two heinous child abuse cases were discovered. Additionally, Johnson stated that the month leading up to the Oshkosh Pathfinder Camporee was their busiest time, with 7,835 Oshkosh volunteer applicants screened.

After lunch, the reports came fast and furiously, and the number of delegates slowly dwindled as people left to catch flights back home. The first item of business in the afternoon was returning to the “Statement of Confidence in the Writings of Ellen G White,” which had originally been presented to the delegates on Sunday. This statement was presented at Annual Council in October and approval was voted to send it on to the 2020 General Conference Session for official approval or rejection. The NAD delegates do not have any authority to either approve or reject — or edit — the statement; they simply must vote that they have received it.

Despite this, and despite the fact a “Statement of Confidence in the Writings of Ellen G White” is always voted at GC Sessions, discussion ensued. Delegates took particular issue with the paragraph that reads,

“We believe that the writings of Ellen G White were inspired by the Holy Spirit and are Christ-centered and Bible-based. Rather than replacing the Bible, they uplift the normative character of Scripture and correct inaccurate interpretations imposed upon it. They also help us to overcome the human tendency to accept from the Bible what we like and distort or disregard what we do not like.”

It should be noted that a nearly identical paragraph appeared in the 2015 GC Session statement that was approved by the Session delegates.

2015 GC Session “Statement of Confidence in the Writings of Ellen G White” (found on pg. 71 of the Session agenda): Proposed 2020 GC Session “Statement of Confidence in the Writings of Ellen G White” (found on pg. 34 of the 2019 Annual Council agenda): After several delegates voiced their concerns on the statement to be voted at the 2020 GC Session, Executive Secretary G. Alexander Bryant made a motion that the statement be received and the concerns officially communicated to the GC. The motion passed.

The NAD delegates also voted receipt of the “Statement on the Biblical View of Unborn Life and Its Implications for Abortion” which was voted by the Annual Council Executive Committee in October.

Erica Jones, assistant director of Women’s Ministries at the NAD, shared a moving report from enditnow, the church’s global initiative to raise awareness and advocate for the end of violence around the world. The organization recently teamed up with Sonscreen Film Festival to produce a documentary called #churchtoo about abuse within the Adventist Church, which was shared with the delegates. Jones also discussed the 2019 enditnow NAD Summit on Abuse. The annual event was held at Andrews University this year. A live-stream of the event is available on the NAD’s Facebook page in both English and Spanish.

The allocation of NAD delegates to GC Session was briefly discussed, and a motion by Executive Secretary Bryant to send union officers and conference presidents as delegates passed unanimously. Additional delegates to Session will be allocated by the unions. As mentioned on Sunday during General Counsel Karnik Doukmetzian’s presentation on how the new NAD president will be chosen, there will be 157 delegates from North America, out of 2,600 or so total delegates.

Follow us on Twitter were we live-tweeted the meetings at: https://twitter.com/spectrummag and see the discussion at #NADYEM19.