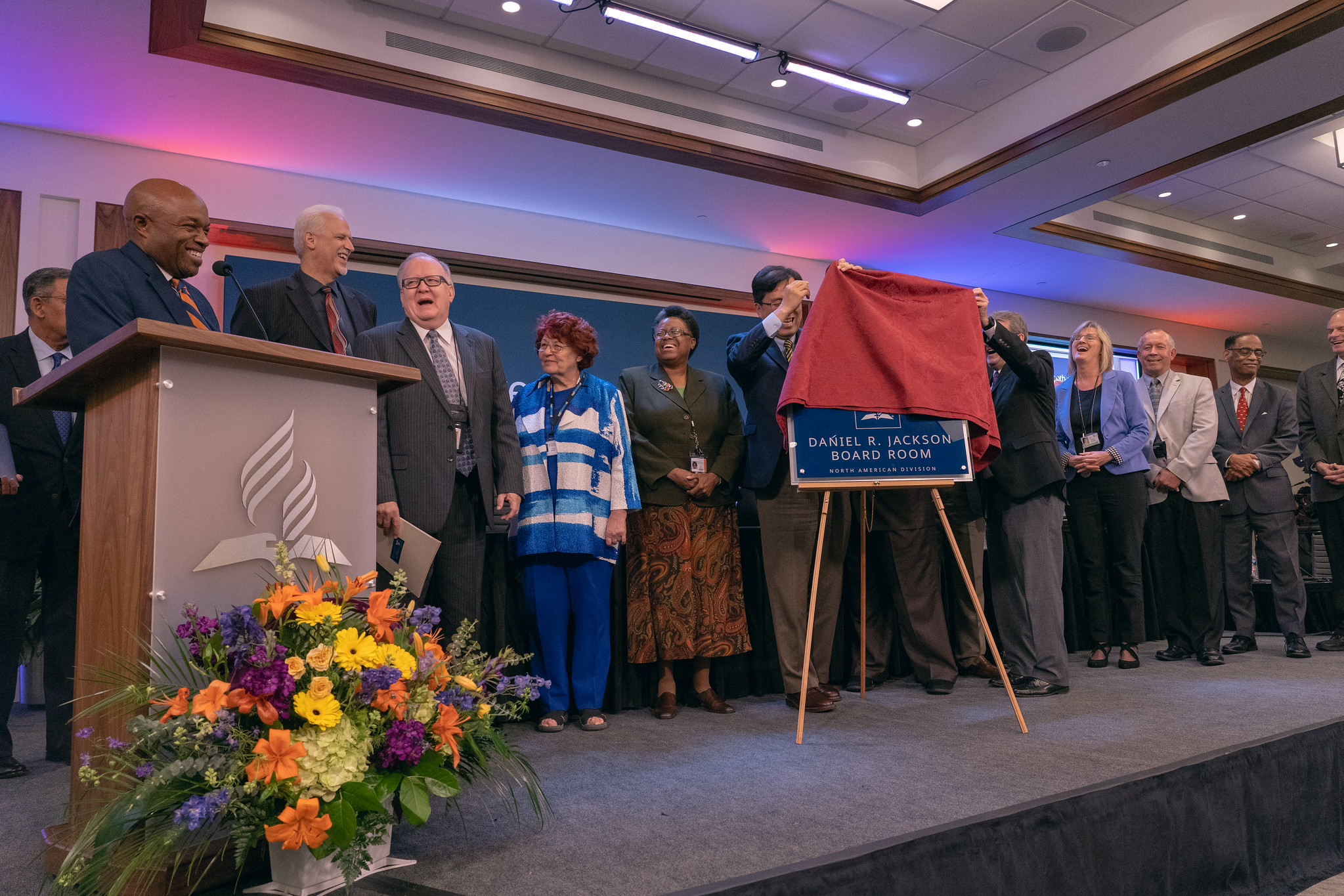 The start of Daylight Savings Time here in the United States meant the delegates to the 2019 North American Division Year-end Meetings got an extra hour of sleep before a full day of business on Sunday, November 3.

The business session kicked off at 9:00 a.m. with Ella Simmons, General Conference general vice president, and John Thomas, associate secretary of the GC, presenting the new World Strategic Plan for 2020-25 with the theme “I Will Go.”

Simmons asked the delegates if they knew what the current strategic plan theme is, but they did not. One person guessed “TMI” (Total Member Involvement), but Simmons said no, the current theme for 2015-20 is “Reach the World.”

Simmons and Thomas then shared the “Resolution on the Holy Bible” and the “Statement of Confidence in the Writings of Ellen G White” that will be officially voted at GC Session 2020. These were first discussed at Annual Council last month, where the Executive Committee approved them to be sent on to the Session delegates for official adoption or rejection.

Simmons read the resolution on the Bible and then NAD President Dan Jackson moved that this body show its support by voting on it, which the delegates did unanimously. Next, Thomas discussed the statement regarding EGW’s writings, but in the interest of time, did not read it. Thomas then moved that the body vote its affirmation of this statement as well, but several delegates protested, saying they could not vote on something they had not read.

After some discussion, Thomas summarized the statement and told the delegates where they could find it online, but it was agreed they would not vote until they were able to read it first. Both statements were printed in the Annual Council agenda which can be found here. The Bible resolution appears on pg. 33 and the EGW statement of confidence is on pg. 34.

A video presentation from the Adventist Media Ministries department was up next, and caused the most discussion during the morning session. When the floor was opened to questions after the video, Mark Galvez, the student delegate from Southern Adventist University requested that the NAD involve collegiate and post-collegiate young people in the planning and development of media so it is more relevant to the concerns of the younger generations.

“I can guarantee you my friends are not asking, ‘where do the dead go when they die?’ or many deep theological questions. We’re asking questions about depression and anxiety and why my brother died of an overdose,” said Galvez.

Lay delegate Deborrah Jackson made a motion that the young people in the room be able to get together and come up with a plan for funding to present to the NAD, which was passed, but conversation continued. Galvez’ concerns sparked several delegates to affirm the role young people need to play and how the various levels of the church structure can better support their media efforts. Dan Linrud, Oregon Conference president, shared how his conference worked into its budget a way to bring the Humans of Adventism creator, Kaleb Eisele, on in a contract position to develop and run Oregon Adventist Stories, how they hired Justin Khoe of That Christian Vlogger fame to train and equip young pastors in digital evangelism strategies, and more.

Before the lunch break, a surprise presentation was announced, in honor of Dan Jackson and his wife, Donna. Executive Secretary G. Alexander Bryant stressed that this was not a farewell to the Jacksons, as they will be in office for several more months. This is simply a time to honor him in the presence of this particular committee, which will not be reconvened before his retirement.

Bryant talked about the long hours the administrative team spends in the Executive Board Room, praying, laughing, and crying together over various issues, and how Jackson has a gift for alignment and collaboration with his team, and so they thought it fitting to name the board room in his honor: The Daniel R. Jackson Executive Board Room. Several other rooms in the NAD building are named after past presidents as well.

Donna Jackson, who serves as the Spouses Association leader and an associate director for NAD Ministerial also received recognition. Desiree Bryant, assistant director of Adventist Education, shared with the audience the ways that Donna makes others feel special and welcome each day. Mrs. Jackson was presented with an engraved vase full of flowers. The engraving reads, “Thank you for being a flower in our garden of life.”

After lunch, the committee returned to discuss two of the big ticket items: the General Conference’s response to the NAD’s requests last year on rescinding the compliance document and tithe parity.

Jackson first relayed to the committee the response from the GC regarding rescinding the compliance document. The NAD’s request included the following:

• That the GC Executive Committee at its 2019 Annual Council rescind the action approving the document that was voted at the 2018 Annual Council.

• That an item be placed on the 2020 GC Session agenda calling for a statement by the world church that 1) “affirms our shared respect for the richness and variety of the multiple cultures and practices in which we minister” and 2) “empowers ministry that is sensitive to the local context.”

The GC responded “no” to the first two points, but was willing to have further conversations about how best to affirm the variety of cultures represented in the Church, said Jackson.

Ron Carlson, president of the Kansas-Nebraska Conference, asked for clarification on how the structure of the church works in terms of such requests. Since the divisions are part of the GC, isn’t the GC essentially refusing a request from itself? Are the divisions equals or subordinates with the GC? In my conference, said Carlson, if someone with authority requests something to go back to the Executive Committee, it will go back. “It doesn’t mean [the committee] has to do what [the person] said, but it will go back. So, I don’t understand how our body, being a division of the General Conference, can vote to have something go back to the next Annual Council and simply be told ‘no.’”

Jackson replied the he feels like, as with any other administration, the leadership sat together and thought about whether they should or shouldn’t return the document to Annual Council, and in the end, it was decided it would not be returned. “So, I don’t know any other way to answer that question,” he concluded.

The conversation then turned to the warnings the two NAD unions (Columbia and Pacific) had received, including why in the initial Annual Council motion, the four European unions were to receive warnings, while the two NAD union presidents were singled out as individuals to receive public reprimands, and what does it mean that ultimately what was voted was warnings for all six unions. Jackson responded that he believed, in the minds of GC leadership, that the NAD unions were perceived as having “persistent non-compliance” which set them apart. Bryant added that he felt the Executive Committee body recognized that an inconsistent application of the disciplinary actions was being applied, which is why they voted to amend the motion and simply warn the NAD unions, instead of publicly reprimand.

Furthermore, Jackson affirmed the leaders of the Columbia Union and the Pacific Union, saying as far as the North American Division is concerned, the unions are in good standing, and are just as accepted and loved as any other union. “We [the NAD] have no way to relate to the warning idea, nor will we,” said Jackson.

A motion was requested to again return points one and two of the NAD’s 2019 request to the General Conference for consideration at the 2020 Annual Council. The motion passed with 138 in favor, 87 opposed, and 3 abstentions.

The discussion then turned to tithe parity. At last year’s NAD Year-end Meetings, the NAD had requested parity with other divisions. The NAD currently remits 6.10% of its tithe back to the General Conference for use in other divisions, while the other divisions remit 2% of their tithe back to the GC. At the 2019 Annual Council last month, the Executive Committee voted that the NAD would decrease its percentage over the next four years down to 3%, plus an additional 0.85% because Loma Linda University Health and Andrews University reside in its territory. Meanwhile, the other divisions will come up to 3% over the next 10 years.

Bryant shared with the NAD delegates that conversation with the GC began shortly after last year’s NAD meetings and continued through August with an unprecedented meeting at Oshkosh Pathfinder Camporee. Bryant added that he felt the GC showed a deliberate and determined effort to work with NAD leadership on this issue.

GC Treasurer Juan Prestol-Puesan then took the delegates through the history of tithe sharing between the NAD and other divisions, from 1990 to present. During the past year’s discussions on tithe parity, the world strongly supported this request, said Prestol. When the division officers voted on it internally, 12 of the 14 territories were in favor. (There are 13 divisions plus the Middle East and North Africa Union Mission which is attached to the General Conference, for a total of 14 territories).

When the floor was opened for questions, several delegates expressed gratitude to both the General Conference and the world divisions for being so understanding of the NAD’s desire to better do mission in its own territory. Eric Brown, Idaho Conference pastor, asked rhetorically if there are lessons that can be learned from how the tithe parity discussion was handled with such grace from all involved. “How might we approach other issues in this same way?” he asked.

In two separate motions, the delegates unanimously voted to affirm the actions of the General Conference Executive Committee at Annual Council regarding tithe parity, and to express appreciation to them for the change.

Image: President Daniel R. Jackson and Donna Jackson are honored at the 2019 NAD Year-end Meetings. Photo by Pieter Damsteegt, courtesy of the NAD on Flickr.