Des Ford: The Perils of Being Right

Des Ford: The Perils of Being Right 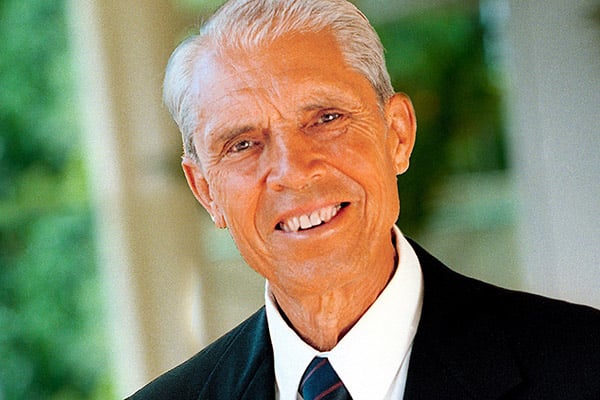 Des Ford has died and I weep. I weep for Des, my friend and brother in Christ. I weep for my church — the Adventist church — with which no reconciliation came about.

Des and I first met at Avondale College in Australia. He was an experienced minister already ordained who returned for one year to complete a baccalaureate degree; I was a young man six years his junior, training for the ministry.

We became friends, more on the intellectual level than the emotional. Des did not open himself to others. After Avondale our paths diverged: I went to India, Des remained in Australia. But we met up from time to time. We didn’t agree in all matters but we respected one another. The format for discussion was always the same: Des would say, “Let’s walk,” and we’d head for the hills, he striding out briskly, I panting to keep up. He did most of the talking. On one furlough when we visited Avondale we found Des sick as a dog. He had left strict instructions that he wanted no visitors — except Bill Johnsson.

I was there at the famous/infamous conference held at Glacier View ranch in Colorado. Three of us, professors at the Seminary — Gerhard Hasel, Fritz Guy and I — were appointed to prepare a statement summarizing the week-long discussions (Hasel, Guy, and Johnsson — a later generation found it hard to believe, but it was us. Those were the days before theologians had become polarized).

We worked closely together and prepared the statement. The council received it, debated it, and voted it overwhelmingly on the final Friday of the meeting.

Des Ford stated that he accepted the statement.

Then, only hours before the meeting closed, a new document suddenly came to the floor. I was profoundly troubled, wondering what was going on. This document was neither discussed nor put to a vote, it was simply left dangling as delegates packed their bags to head home.

The process, from my admittedly limited perspective, bothered me. It still bothers me.

On the Sabbath afternoon after the Glacier View conference ended, several of us went walking together. We fell in with Des and his wife Gillian. Gill was upset, urging Des to form his own ministry where he would, she said, get the respect he deserved. Des seemed unsure what to do. Along with others in the small group, I strongly urged him to stay with the church.

Most Adventists aren’t aware that behind-the-scenes efforts to reclaim Des for the Adventist ministry continued after Glacier View. I had a small part; the chief initiatives came from W. Duncan Eva, a general vice-president of the General Conference. He conducted these efforts with the quiet approval of the president, Neal C. Wilson.

A couple years after Glacier View, a few of us from the General Conference along with Elder Eva, met with Des and a couple others in the conference room of a motel in San Francisco. The meeting was short: positions on both sides had hardened. There would be no reconciliation.

If Des had chosen to start a new church, he would, I think have attracted a large following of Adventists in the South Pacific, America, and Canada. He did not take that path. He always maintained a close relationship with the Seventh-day Adventist Church. After he left the Adventist ministry he focused on writing and public speaking. One of his books presented a strong defense of the Sabbath.

During these years and subsequently, Adventist theology underwent a major shift in emphasis. Whereas before Glacier View many — perhaps most — Adventists lacked assurance of salvation through grace alone, slowly the liberating message of the gospel permeated the church — not uniformly, but pervasively. Ironic as it seems in retrospect, these changes can be traced in large measure to Glacier View and Des’ ministry.

Des Ford is an Australian tragedy. You can’t begin to grasp the dynamics of his love-hate relationship with the Adventist church in the South Pacific without factoring in the culture. Australian culture lacks niceties, nuances, subtleties. Theology and politics reduce issues to distinctions of black and white. Australians tend to be suspicious of shades of grey. Election campaigns are a no-holds-barred, slam-bang brawl, lasting only a short time.

Des Ford was a child of the culture. By both temperament and environment his proclamation, whether oral or written, fell naturally into a debate, either/or mode. His clear proclamation of the gospel helped thousands to find peace and hope; inevitably it generated “concerned brethren” (their name) who bitterly opposed him.

Des Ford is an Adventist tragedy. This man of charisma, unmatched in debate — could not Adventism have found a place to accommodate his many gifts? As the years went by and Des passed into his 80s, I kept waiting and praying that at long last I would learn of a reconciliation. Des needed it; no less did the Adventist church, especially in Australia. He trained a generation of ministers and teachers; after he left the ministry hundreds of former students gave up on Adventism. The church in the South Pacific suffers from a deep, unhealed wound.

I need to make one thing clear: in my judgment, the blame doesn’t lie wholly with church leaders. Reconciliation requires action from both sides, from both parties. Des was so sure that he was right that he made reconciliation very difficult.

Margit Heppenstall, wife of Dr. Edward Heppenstall, Des’ mentor, shared a revealing vignette with Noelene and me when we visited them in their retirement home at Carmel, California. She related a conversation that went as follows when Des and Gill stayed at their home:

Margit: “The trouble with you, Des, is that you are always right.”

Des: “No, I am not always right — except in matters of theology!”

Always right — it’s a peculiarly Adventist thing. We think that if we can only dot all the theological “i’s” and cross all the “t’s,” we have it made, in this life and the next. Somehow we’ve never taken the Apostle Paul’s words to heart: “Knowledge puffs up, but love builds up” (1 Corinthians 8:1). We profess salvation by grace, but practice salvation by knowledge.

Toward the end of Des’ life, his daughter, Ele’nne, tried hard to broker the needed reconciliation. Ele’nne, a brilliant barrister, who as a side ministry intervenes in church disputes to try to bring healing on Christian principles, solicited my help. Although I was retired and no longer part of the power structure of the Adventist church, I was a “neutral” party, a friend of Des and also known and respected in the South Pacific.

I made the trip to Australia, Des and I met in Brisbane, close to where Des and Gill lived in retirement. We sat in the sunshine, on a bench surrounded by flowers in full bloom, then went inside to a small café and ate together. A reconciliation meeting had been planned. Low key, of course, without publicity.

When will we Adventists ever learn? Ever learn that theology, important as it indeed is, cannot be allowed to become the be all and end all of our Christianity? Ever learn that at best we know in part and understand in part?

I weep for Des Ford.

I weep for my church.

Dr. Desmond Ford Passes to His Rest by Alisa Williams

William G. Johnsson is the retired Editor of Adventist Review and Adventist World magazines, and the author of numerous books including Where Are We Headed? Adventism after San Antonio (2017) and Authentic Adventism (2018).