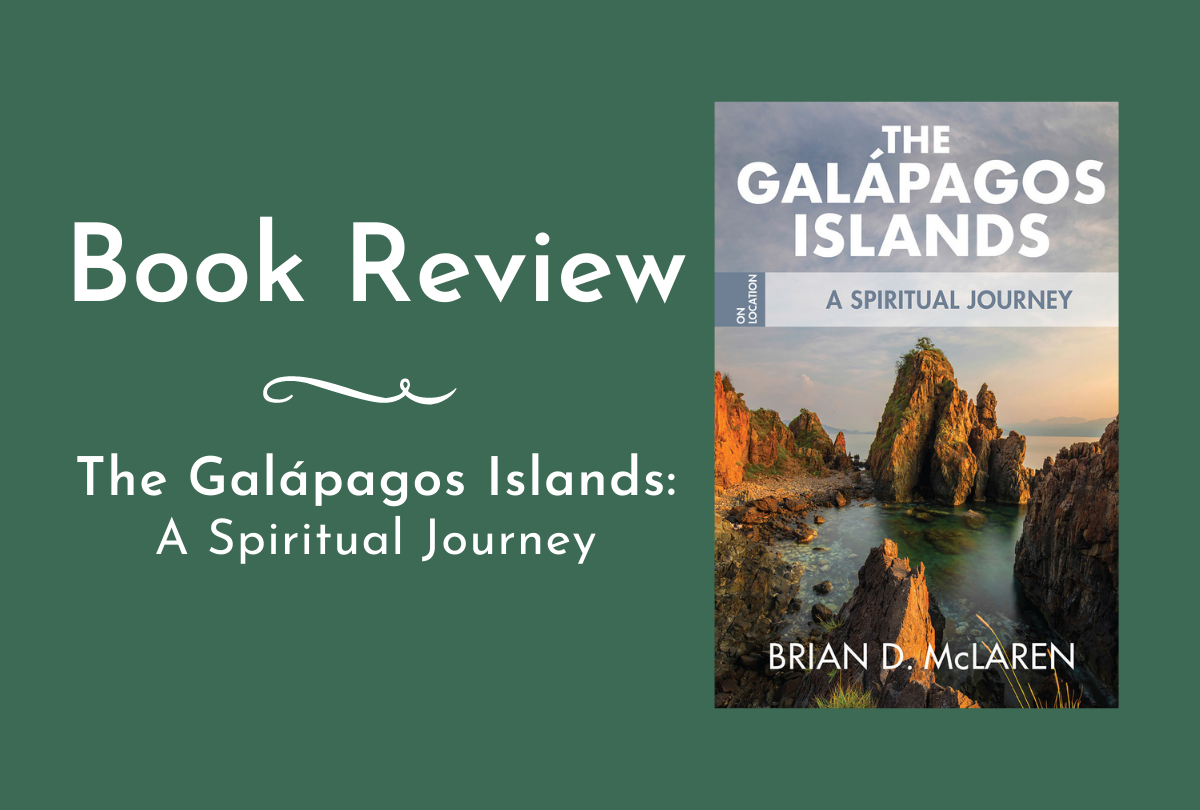 When does a journey begin, Brian McLaren asks, as he departs on an assigned trip to the Galápagos Islands. His publisher, who thinks there might be a connection between the spiritual and travel markets in books sales, has suggested the trip. McLaren welcomes the chance to spend time away from the 24/7 news cycle and refresh the outdoor spirit that kindled wonder during his childhood. He dives into the assignment with gusto, not least because the trip includes daily snorkeling sessions with the undersea life that fisherman McLaren loves.

The first half of the book grows out of McLaren’s diary of eight days aboard the Golondrina. Swimming with sea turtles, drifting among damselfish, wrasses, and angelfish, he gushes about what he sees. Joy is the title of this chapter, and the word comes from a playful session that he experienced with a sea lion in the water that left him laughing aloud through his snorkel. Later, as he bids his shipmates farewell, his question becomes, “And when does a journey end?” Since we are only midway through the book at that point, the answer, obviously, is not “at the airport.”

Contemplation comes later, sorting through photos, reading books, thinking about the experience, and talking about it with others. In the book’s second half, McLaren also describes the invisible luggage that he had on the trip—the fundamentalist ideas about creation with which he was reared. The chapter about Charles Darwin is titled “Monster,” although after reading The Origin of Species, McLaren describes Darwin as a dutiful man:

He felt the duty of loyalty to his family, his nation, his culture, his tradition—and to the actual observable data presented to him by the world itself, including his memorable trip to the Galápagos Islands.

And where these competing loyalties were in tension, he was loyal to the tension itself. He lived with it, felt it, and refused to resolve it. (161-162)

McLaren surmises that the tension in Darwin’s life contributed to his terrible health, and he comes away from reading Darwin’s books and biographies about him impressed with Darwin’s commitment to truth and what that cost him. “That dutiful and agonizing fidelity may not be a Sunday-school definition of faith, but it strikes me as a pretty dependable definition of faithfulness, and it portrays dutiful and agonized Charley Darwin not as a monster but as a good and decent man of conscience, struggling to do the right thing at the right time in the right way” (163).

But what about McLaren’s personal spiritual journey on this trip? As he turns to this subject, he first sums up his experience of conservative religion in one word: pressure. Pressure “to avoid being punished. . . to be different and set apart from ‘sinners’ and ‘the world’ and especially ‘the liberals.’ Pressure to evangelize and convert everyone I can so they will go to heaven. . . Pressure not to question because questioning could lead to doubt and doubt could lead to heresy and heresy could lead to hell. Literally.”

He wrote, “I couldn’t buy it all, but I couldn’t throw it all away either.” Drawing on one of his favorite philosopher/theologians, John Caputo, he says that “whether or not God exists, God insists. In other words, the existence of this or that God may be doubted and debated, but the insistence of God, the refusal of the idea of God to just fade away like alchemy or phlogiston or cassette tapes, can hardly be doubted” (178).

Struggling and sorting through his experiences in the Galápagos, he says, “Finally, a thought takes shape, as sleek and slippery as a cutthroat trout. I realize I can never stop speaking about God, whether or not I use the word, for God is all I ever speak about, all I love, all I seek to save and be saved by” (200). With that said, he looks for his invisible luggage and can’t find it; it has vanished. Six weeks after his trip, he reflects on the experience and says, “Faith? It’s still here, deep within me, as open hands reaching forward. Love for Jesus? Deeper than ever, less pressure, more free. Belief in good news of great joy for all people? Stronger now, surer now, though understood differently” (268).

He concludes with this observation: “It’s odd. I always thought that one was a human first, and then added Christian identity on top of it. Now the order flips, and I see the purpose of Christian faith, and other faiths as well, as helping people to become more fully human, fully alive, fully members of the planetary neighborhood we share with all other creatures, all our relations” (269).

My first reading of McLaren’s book was in 2019, when it originally came out, and when we at Spectrum were in the process of putting together our own trip to the Galápagos Islands. McLaren’s diary of his journey was a helpful guide about what to expect onboard ship. Rereading the book upon my return from Galápagos, the book has again been instructive as I sort through my reflections. I’ve learned that we all pack differently for a trip, take different photos, focus on different experiences. 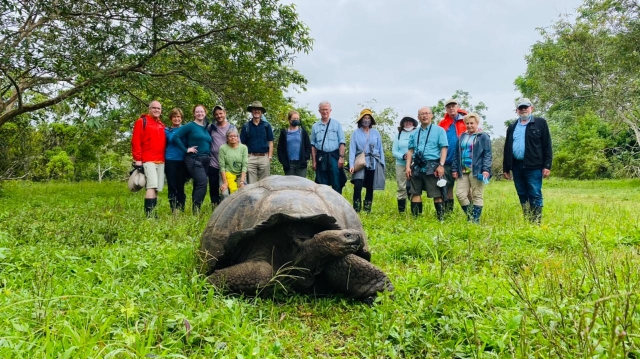 The group from Spectrum pose with a giant tortoise while visiting the Galápagos Islands in August 2021. Image: Bonnie Dwyer

When we began our voyage through the islands, our guide told us not to touch any of the wildlife or pick up any natural objects as souvenirs. We were to take only pictures and memories. He did not say anything about leaving things behind. But McLaren’s missing luggage has taught me something new about spiritual journeys. They may not be about the destination, or an “aha” experience along the way. There’s also what gets left behind.

Bonnie Dwyer is the editor of Spectrum