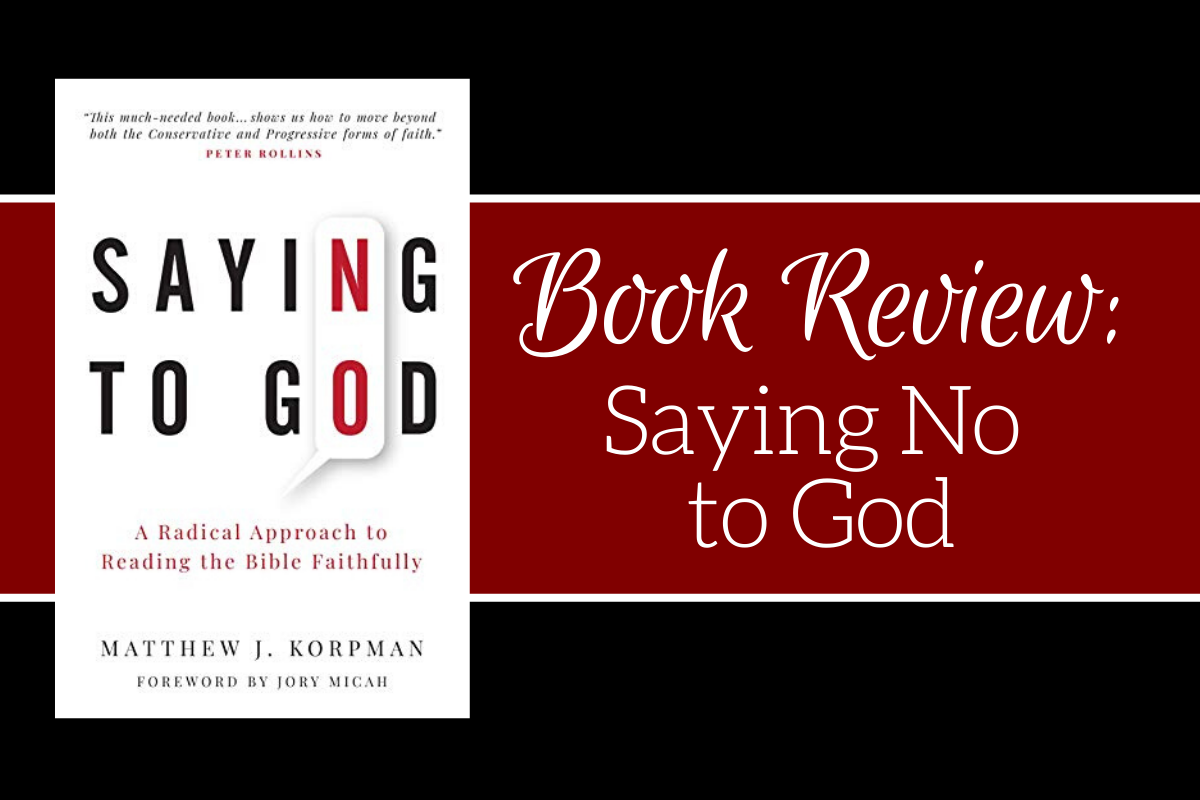 In his book Saying No to God: A Radical Approach to Reading the Bible Faithfully (2019, Quoir), author Matthew Korpman does something new when he gives book-length attention to the assertion that saying “No” to God is an example of faithful discipleship. Biblical inerrancy, whether formally adopted or not, twists traditional religion’s description of discipleship into something different from what the Bible, as a whole, conveys. Calling attention to flaws of the use of scripture for “Divine Command Theory,” Korpman traces the ignored canonical strands that show a root of the Hebrew tradition of a struggle with God with a willingness, ultimately, to say “No” to God. This book looks at both hermeneutics and praxis.

Published by Quoir, Korpman’s work fits the mission described on their website:

“We publish content that isn't afraid to challenge assumptions, see beyond comfort zones, and expand the collective Christian consciousness.”

Korpman, a La Sierra alumnus who is studying at Yale Divinity School, starts his introduction with a question, “When was the last time that you said no to God?” (25). He organizes his thoughts into two sections, “Confrontation” and “Incarnation,” separated by an intermission, “Realization.”

The intermission section in the middle provides a great example of the unconventional collection of works from which Korpman crafts his thesis. Here, as throughout the book, Korpman takes scripture seriously, using 1, 2, 3 John this time. Yet, he uses Peter Rollins’ pyrotheology in combination with Andrews University Professor Darius Jankiewicz, and Adventist church founder Ellen G. White. The whole book shows a familiarity with recent work of academic voices — Guy, Borg, Tillich, Crossan, Jersak, Dawkins — as well as with those who attempt to make faith meaningful for non-academics in the 21st century experience — Bell, McLaren, Enns, Vines, Corey.

Korpman cites 1 Thessalonians 5:21 as a sort of proof text that exhorts a disciple actually to doubt everything that does not make sense with the revelation that God is love. He says we are to be friends of God, not mere servants. Bibliolatry is a hinderance in the task, and certainty can be a problem. In order to test everything, you must also test things that you already believed were proven. Even the demons believe, but does a disciple care enough to doubt and struggle with God? Did Paul’s metaphor of seeing in a glass darkly only hold true for that moment, or can it be applied on the journey of every disciple, even now?

How does one use the Bible as an ancient book for a dynamic discipleship? In Part 1, “Confrontation,” the reader can see how characters in scripture related to the words of God — both direct and those on paper. Abraham (Genesis 18) and Moses (Exodus 32) set the precedent for struggling with God over His character and reputation to the point of ignoring a direct command. Job (Job 13, 23, and 42) argued his case with God and ultimately received the compliment of being one who had spoken truly about God. Jacob was renamed Israel, which means the one who struggled. Doubt and struggle are sacred and part of the journey of communion with the divine.

Certainty causes people to lose the arc of present truth of God’s stance in the moment. Those who rejected Jesus were too certain of their hermeneutic. Jesus reinterpreted sacred writings (John 8 and Mark 10). Then, Paul placed a different nuance on Jesus’ words about divorce (1 Corinthians 7), setting a stage for believers to carry on in the manner that Jesus described in John 16 when He said there was more to say, but that disciples were not ready.

Just as Jesus is divine and human, so scripture is divine and human. One depends on the Holy Spirit to guide. Since God has chosen to interact with humanity, then God is contingent on the human response in conjunction with the Holy Spirit. Flat assertions of God’s sovereignty, “Divine Command Theory,” and blanket human contingency do not fit with the entirety of scripture. Korpman cites Daniel Migliore to say that biblical interpretation must have two angles:

Near the end, Korpman re-examines the first sin of Adam and Eve:

“The first human couple’s greatest shortcoming was, in short, not having a good enough relationship with God to doubt the serpent’s words, and not caring enough about God to fight him over them” (341).

With a nod to the Great Controversy theme, Korpman asserts that in some ways, God has been trying to address this breach of trust ever since, including by interaction with His people, named “Israel,” those who fought God.

Friends of God have to speak like friends and say “No” to the verses that point to exclusivity and narrowness and paint God as utilitarian and transactional. Finally, Korpman summarizes some clues when a disciple might consider it wise to say “No” to concepts that are attributed to be from God:

For Korpman, the character of God is at stake every time a disciple might consider saying “No” to God.

I read Korpman’s book as an unfolding serendipitous experience as he synergistically bonds the thoughts of modern scholars and passionate writers with key ideas from Ellen G. White. My “aha” moment was crowned as I read acknowledgements that included a shout-out to a young pastor friend with whom I had some differences many years ago. This book shows a path on which Adventism can craft meaning with theological rigor while having interface with the cultural questions of the moment. It shows we need not be frozen in Ellen G. White’s world, but we can follow her trajectory, Jesus’ trajectory, God’s trajectory.

Using baseball imagery, I have had the feeling, lately, that my church is checking the swing when it comes to describing the ways we provide answers to life’s questions in the current context. As a serious reader, but no theologian, I have noticed impactful insights and applications from varied voices that could be helpful to boxed-in Adventism in the mission of conveying God’s character and what God wants in discipleship. I believe Matthew Korpman connects some dots and completes the swing in this book.