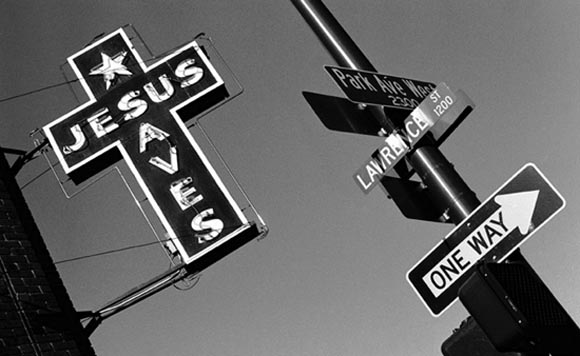 I love the gospel. There is so much power and beauty in it — it is the one biblical theme I never get tired of. I preach about it constantly, write about it tirelessly, and talk about it passionately. And while I have much to learn about the grace of God I am thankful for what he has already taught me.

But such love and appreciation for the gospel does not come without a few scars. For years I have had to fight, struggle, and wrestle for a clearer view of what Jesus did for me. And even now I continue to grapple with the many voices both inside and outside my head that try to pull me away. There are Pharisees, misconceptions, and ignorances that live inside of me. There are biases, counter-biases, and selfish ideologies that are in there as well. Then there are the voices of fanatics, conservatives, liberals, and emergents — all of whom want me to believe their version of the gospel.

While I have been a Seventh-day Adventist all of my life, my love for the gospel did not begin until around five years ago. Years of hypocrisy and self-induced obliviousness led me to a crux in the journey that demanded resolution. I was in Babylon even though I was Adventist — confused and bewildered by an eclectic view of the cross that failed to sustain me during some of the most challenging years of my life. Confronted for the first time with my sin-problem, I plunged into a state of depression and anxiety that would last for years. During that time, my mind attempted to juggle the gospel of grace I had learned as a teenager from Hispanic preacher Felipe Andino and the gospel of perfectionism that I had now been exposed to – a gospel known as Last Generation Theology. In my gospel illiteracy, I assumed both were the same gospel and then attempted, rather unsuccessfully, to syndicate the two. What I ended up with was subverting the gospel of grace by subordinating it to the gospel of perfectionism and emerging from the iron and clay mixture with a subconscious formula that was not so sure to get me to heaven: The grace of God + Your efforts and obedience = Salvation. I tried to soften the impact by adding “by God’s grace of course” to the second part of the formula, but it didn’t make a difference. I had very little peace.  And while this skewed version of the gospel was not to blame for my emotional instability, it certainly did not help to foster healing.

Time went on. I continued to study the gospel and listened to almost every Alejandro Bullon sermon on the face of the earth. His explanation of the gospel was impeccable  — my problem was not his explanation but my own amalgamation of cross and beast. While Bullon’s sermons did much to point me in the right direction I still was not making a distinction between the true gospel and the one that continued to insist that I would be lost if I did not perform well enough. While none of these thoughts were clear in my mind, they were lodged deep in my subconscious and emerged from their cavernous lair in the form of knots in my stomach.

I arrived at Southern Adventist University and ran into a book that beckoned me from the shelves of the library: My Tortured Conscience by Martin Weber. I devoured the book, and though the road ahead was long and arduous, that book, with the horrible 90s cover, was a fork in the road for me. Then came Conquering the Dragon Within by Marvin Moore and there I discovered that I did not lose my salvation every time I sinned unless I confessed right away. Oh, the relief! But true freedom did not come until my wife walked into our tiny living room one evening and said, “I finally get it! I finally feel free! I finally get the gospel!” I read the chapter from the book that had revolutionized her life, Seeing With New Eyes by Ty Gibson. It was then that my subconscious formula of What Jesus did + What I do = Salvation was exposed in all of its soul-destroying light. For the first time in many years, I felt relief. I felt free. The formula was wrong. I had had it wrong all along. “What Jesus Did. Period.” That was the formula. All I had to do was say yes, but even the act of saying yes was an act made possible by grace, prevenient grace as Jacobus Arminius (and yes, the Jesuits) had taught it.

Excited with my new found joy I prepared a sermon  — and then I ran into a wall. It was too good to be true. There just had to be something I had to do. Jesus-only was way too good. So I put my sermon aside and went to the official SDA website to check our belief on the gospel. I had to make sure I had it right, and after reading it I was blown away. We did have it right. I preached my sermon and moved on with my newfound joy. But one nagging question remained: What about Last Generation Theology?

During my time in the LGT camp I had come to believe that the SDA church  — Ellen White included — taught LGT up until the 1950s when, during the "Questions on Doctrine" crisis, Adventist leaders compromised on the gospel in order to gain evangelical approval. If this was true, then my new understanding of the gospel was actually false, for it reflected the SDA compromise in the 1950s. This meant that LGT was true after all and that I had been hoodwinked into embracing this “new theology.” I lived with this fear for some time until Leroy Moore settled all of my doubts in his book Questions on Doctrine Revisited. I did tons of research and study (too much to summarize here) and came to discover that while QOD was not perfect, LGT as constructed by its founder M.L. Andreasen was further from the truth than QOD ever was. The history regarding this topic is long and complex, so I won’t reconstruct it here, but suffice to say that not only had I come to love the gospel more than ever but I emerged from my studies on LGT and QOD with a greater love for Ellen White and Adventism as a whole.

Last Generation Theology was helpful to me in the sense that it assured me that victory over sin was possible – and believe me, I needed some victory. In this sense I am thankful for LGT. But I lived with a constant sense of having to add something to what Jesus did. While there are some LGT preachers and believers who have a more cross-centered approach, the general result of this theology is subordinating the cross to works. Not only that, but LGT relies heavily on a presupposition which cannot be supported by the Bible or Ellen White: the human nature of Christ as post-fall. And while many LGT proponents continue to insist this is not the case, modern scholars and historians such as Edward Heppensal, Woodrow Whidden, Leroy Moore, and George Knight have effectively demonstrated that LGT proponents do not own the market on the human nature of Christ or any of the other issues raised by LGT founder Andreasen.

So what about perfection? I still believe in it. Every time I walk into a church where no one says hello, every time I read a story about Christian intolerance and insensitivity, every time I interact with leaders who are more concerned with themselves than with the broken, and every time I am exposed to a church that is more concerned with drums and cheese than loving the hurt, the dispossessed, and the addicted, I am reminded of Ellen White's words, “When the character of Christ is perfectly reproduced in his people…” You know the rest.

However, while I still believe in perfection, I differentiate it from the perfectionism inherent in LGT. For now, here are 3 ways in which I differ:

Jesus-only has revolutionized my life. It has given me a new passion for living and for ministry. It hurts me every time I run into people who still live as though their diet, dress, or behavior can get them into eternity. But I thank God for the ride he has led me on and the opportunity I now have to share it with others.

If you would like to read more about my story and how I have come to make sense of all of these issues I invite you to visit my website www.jesusadventismandi.com and browse around. I also invite you to purchase my newly published eBook “Making Sense of Adventism: Faith-Journey of an Adventist Blogger”. You can also follow me at thehaystack.tv where I will be writing exclusively on the gospel from an Adventist perspective.

Originally from New Jersey, Marcos Torres, a recent theology graduate of Southern Adventist University, now lives in Australia with his wife and children. His dream is to share the story of Jesus with the postmodern culture that pervades the continent. His greatest passion is to help others realize that Christianity is a passionate and committed relationship with God, not a religion. He also writes his own blog at www.jesusadventismandi.com