The Church We Love, Serve, and Lead 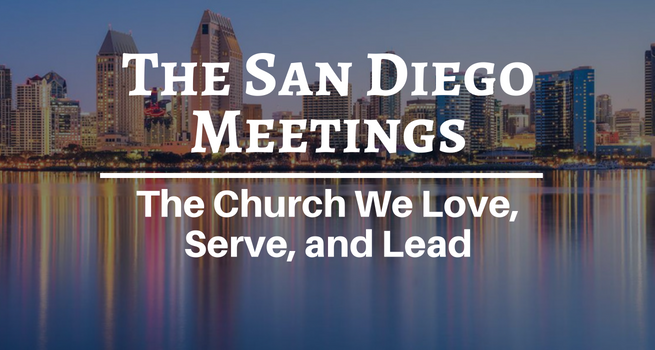 This past week has been a very rewarding and inspiring experience. I was one of a group of some 30 people who met for a few intense days in a hotel near San Diego. I was honored to have been invited and to be able to interact with a group of theologians, male and female pastors, and present and former church leaders. Our theme was not only a convenient slogan but was the very soul of what this meeting was all about: “The Church We Love, Serve, and Lead: Best Practices and Strategies for the Future.”

The meeting was a follow-up on the Unity Conference that was held last year in London, England. During that conference, a series of papers was read that touched on some of the major issues the Adventist Church is currently struggling with. Its special focus was on the response of church leadership at the highest level of the denomination to the fact that some church unions in the United States and elsewhere have ordained female pastors or have expressed a strong dissidence with the continued gender discrimination in the Adventist Church. The General Conference maintains that ordaining women for pastoral ministry goes directly against the decisions of the world church and is evidence of a serious kind of non-compliance that must have punitive consequences.

Since that conference was held, new developments have taken place. During the meetings of the full Executive Committee of the General Conference (during the 2017 Annual Council), proposals were introduced to enforce compliance with the rules of the church that forbid the ordination of women pastors. A document was introduced that caused much consternation and, in the end, was rejected by a significant majority of the committee. It contained the idea that all committee members would henceforth be required to sign a loyalty document, with the explicit stipulation that they would comply with all decisions of the church. It was further suggested that presidents of organizations that were “non-compliant” could be denied voice and vote in committee meetings as long as their organizations are non-compliant. The manner in which this document was produced and sprung upon the committee members caused great dismay, and many felt that there had been an intolerable amount of manipulation by top church leadership.

For many around the world, it was a great relief that the proposals outlined in this controversial document did not pass. But this is not the end of the matter. A Unity Oversight Committee has been set up by the General Conference with the clear intent of preparing a new proposal for the October 2018 Annual Council that will, once again, focus on what action must be taken against non-compliant unions. Our meetings in San Diego of the past few days dealt with our serious concerns about this matter. We asked ourselves what can be done to steer the church away from this non-compliance trajectory and to ensure that the church will no longer be sidetracked by the power struggle around non-compliance but can, once again, give all its attention to the mission with which it is charged.

During our meetings in-depth discussions took place about how certain processes occured in past years. Attendees agreed that there is a need for a publication that reveals some very questionable processes and debunks some myths that have evolved. We spent hours talking about possible ways to disseminate vital information to the members of the approximately 350-member Executive Committee of our church. Our work was not some kind of conspiracy but an honest attempt to contribute to solutions and to help bring about full gender equality in the church, understanding that not all church entities world-wide would deal with these issues at the same speed and in the same way.

I learned a lot in these past days. Some issues became much clearer to me, and my desire to be involved with supporting my church received a new impulse. I thank the initiators of this week’s event for having invited me to this positive and decidedly spiritual event, and I pray that our work will bear fruit and will prove to be a blessing for the church we love, serve and lead.

Reinder Bruinsma is a native of the Netherlands who retired in 2007 after a long career in pastoral, editorial, teaching, and church leadership assignments in Europe, the United States, and West Africa. After receiving a Bachelor’s degree from Newbold College and a Master’s degree from Andrews University, he earned a Bachelor of Divinity with honors and a doctorate in church history from the University of London. He recently interrupted his retirement to serve as the president of the Seventh-day Adventist Church in Belgium and Luxemburg. He has authored more than twenty books, in Dutch and English, and a large number of articles. He has also translated various theological books from Dutch into English. This article first appeared on the author’s blog and is reprinted here with permission.