Christ in the Heavenly Sanctuary

Christ in the Heavenly Sanctuary 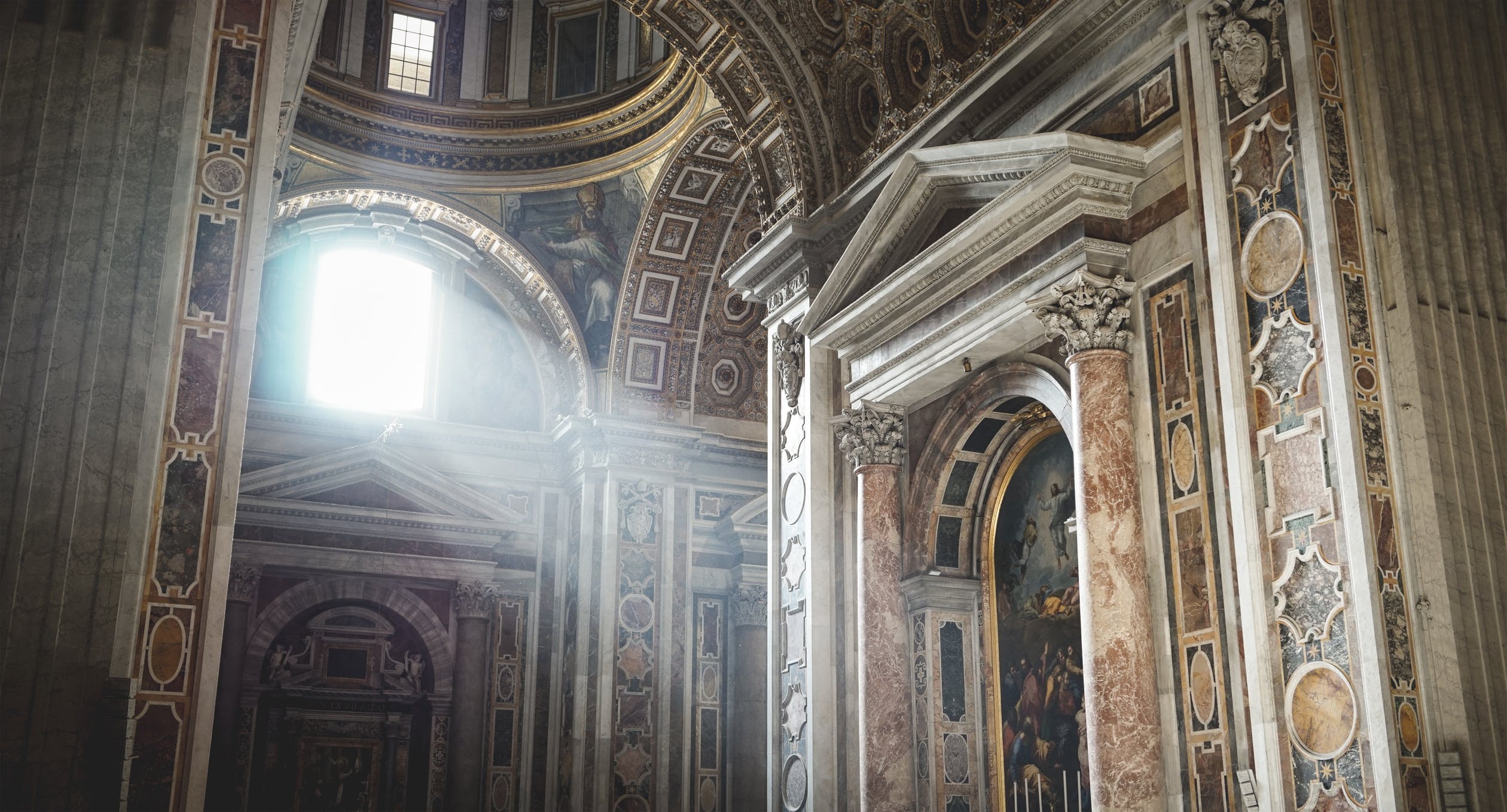 As a springboard for diving (or back-flipping) into this week’s lesson, I offer a train of thought I have been following. It is my train . . . but I have looked for answers within writings that I consider inspired.

This is the train:

1. What does sanctuary mean? Merriam-Webster explains that, foremost, a sanctuary is a consecrated place. But the definition does not deal with the meaning or purpose of that consecration. The Cambridge Dictionary definition is first of all about sanctuary being a safe place, especially for someone or something being chased or hunted.

But safe places can also be safety nets that have become hammocks, like when university students need a safe place on campus where they can go and color or pound on play-doh and forget that a speech is being made in their environs from a different ideological point of view than their own. Sanctuary can also imply a place where “the law” cannot reach the wrong-doer. The concept of sanctuary has become a politically tense one.

2. What is the biblical sanctuary? The question, What is the sanctuary? is clearly answered in the Scriptures. The term “sanctuary,” as used in the Bible, refers, first, to the tabernacle built by Moses, as a pattern of heavenly things; and, secondly, to the ‘true tabernacle’ in heaven, to which the earthly sanctuary pointed.”1

Was the wilderness tabernacle, or the “true tabernacle” a safe place for the tension between God and humanity? I find it intriguing to think that perhaps God needed a place to be safe from having His righteousness destroy the unrighteousness that is in, through, and among His people. In the wilderness, He so wanted to “dwell among us” and let us know the plans He had developed for our potential cleansing and reinstatement into the Heavenly Family where we belonged. So, the systems of the tabernacle were both for the education of humanity and the protected communication between God and humanity.

3. What is the Law of God? The tension existed because the Law of God had been broken. And most every Adventist knows that the Law of God is at the center of this dialogue between God and humanity. “In the most holy place is His law, the great rule of right by which all mankind are tested. The ark that enshrines the tables of the law is covered with the mercy seat, before which Christ pleads His blood in the sinner’s behalf. Thus is represented the union of justice and mercy in the plan of human redemption.”2

Two more ways of articulating what “the great rule of right by which all mankind are tested” is can be found in this passage from The Desire of Ages: “Looking unto Jesus we see that it is the glory of our God to give. ‘I do nothing of Myself,’ said Christ; ‘the living Father hath sent Me, and I live by the Father.’ ‘I seek not Mine own glory,’ but the glory of Him that sent Me. John 8:28; 6:57; 8:50; 7:18. In these words is set forth the great principle which is the law of life for the universe. All things Christ received from God, but He took to give. So in the heavenly courts, in His ministry for all created beings: through the beloved Son, the Father’s life flows out to all; through the Son it returns, in praise and joyous service, a tide of love, to the great Source of all. And thus through Christ the circuit of beneficence is complete, representing the character of the great Giver, the law of life.”3

So, the Law of God can be described in these ways:

How do these lofty principles relate to the table of stone, written with God’s own hand, that was seen in vision residing in the Most Holy Place, under the mercy seat? How does “All things Christ received from God, but He took to give” translate to the 10 Commandments? The following diagram is how I can visualize that (ideas adapted from Dr. Horst Mueller). 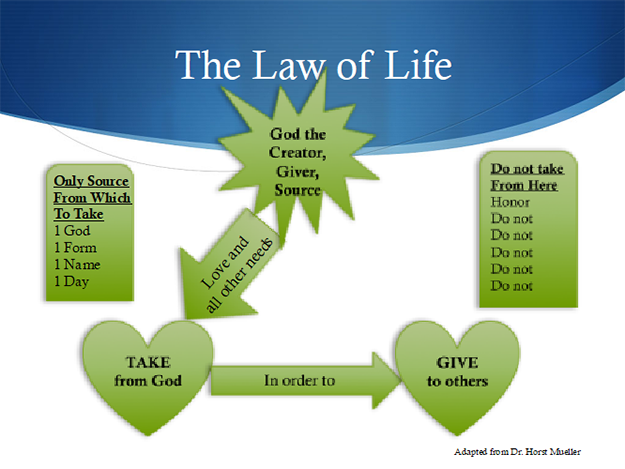 We can look at the lives of two biblical characters to understand that there must be some principle to the law that is much bigger than “keeping the commandments.” The Rich Young Ruler (Matt 19:17-22) was someone who carefully obeyed, out of his own “goodness,” all of the commandments expected of him. When Jesus asked him to give all that he had, his declining was a statement that he did not understand the “bigger” picture of the law, which is “take from God to give to others.” He assumed God was asking something from him that was his.

The other example is the prodigal son’s older brother (Luke 15:28, 31). He had always done what was expected of him. He was in the church. He didn’t even party at home, apparently. But somehow, he felt that this was all something from inside himself that he was giving to the Father. We too often fall into the trap of believing we “give” tithe and offerings, that we “give” worship to God. Actually nothing originates in us, but only flows through us, if we will allow it to. That flow is keeping the law. The fourth commandment is a sign that we understand that we aren’t the source, God is the Creator. We don’t keep ourselves and our universe running—actually, only God does. And also in the fourth commandment we are reminded that other people don’t keep our universe running while we piously “give” our worship to God.

Breaking the commandments (if you break one, you break all, because they are founded on the same great principle—take from God to give to others) can be illustrated as well. It is, in essence, the Law of Death. The wages of sin are not death because an arbitrary God decreed it. The wages of sin are death because sin stops up the system of life—the great principle on which the universe runs. The cleansing, both in the typical and in the real service, must be accomplished with blood [a life given]: in the former, with the blood of animals; in the latter, with the blood of Christ. Paul states, as the reason why this cleansing must be performed with blood, that without shedding of blood [the giving up of life] is no remission. Remission, or putting away of sin, is the work to be accomplished6 (parenthetical comment mine).

5. What is sin? My next thought is, then what is this sin that must be put away? For that answer, my favorite inspired explanation is this: “All sin is selfishness. Satan’s first sin was a manifestation of selfishness. He sought to grasp power, to exalt self. A species of insanity led him to seek to supersede God. And the temptation that led Adam to sin was Satan’s declaration that it was possible for man to attain to something more than he already enjoyed, possible for him to be as God Himself. . . . The design of the gospel is to confront this evil by means of remedial missionary work, and to destroy its destructive power by establishing enterprises of benevolence. . . . Sin has extinguished the love that God placed in man’s heart. The work of the church is to rekindle this love. The church is to co-operate with God by uprooting selfishness from the human heart, placing in its stead the benevolence that was in man’s heart in his original state of perfection.”7

6. So, the next to the last question in my train of thought is this: What does it look like to have sin put away in my life? That is what Jesus is doing in the Sanctuary during these end times, isn’t it? How do I know whether or not He is doing it for me?

Christ says to his followers, “Ye are the light of the world.” Then let your light shine forth in clear, steady rays, Do not wrap about you a cloud of darkness. Cease to suspect others. By good works represent the character of Christ. When you are tempted to yield to despondency, look to Jesus, and talk with him. Your Elder Brother will never make a mistake. He will judge righteously. He will guide you aright.8

It is through the church that the self-sacrificing love of Jesus is to be made manifest to the world; but by the present example of the church the character of Christ is misrepresented, and a false conception of Him is given to the world.9

And in life and character the Christian is bound up with Christ in His plans of mercy for humanity. His character is to be a reproduction of the character of Christ. The unselfish, self-sacrificing life of Jesus is to be copied by every soul who loves the Redeemer.10

7. What is Christ doing in the heavenly sanctuary? I believe “Christ is waiting with longing desire for the manifestation of Himself in His church. When the character of Christ shall be perfectly reproduced in His people, then He will come to claim them as His own.”11

But, only He can accomplish that work as I let Him empty me of self, as He emptied Himself, in order to let Him reach the world, in love, through me. That is what is being accomplished in the Sanctuary . . . we, the Church, are having our characters transformed from self-centered to other-centered, perfectly empty vessels through which God can shine His character.