Do They Want to Change the Church? The One Project: Day Two

Do They Want to Change the Church? The One Project: Day Two 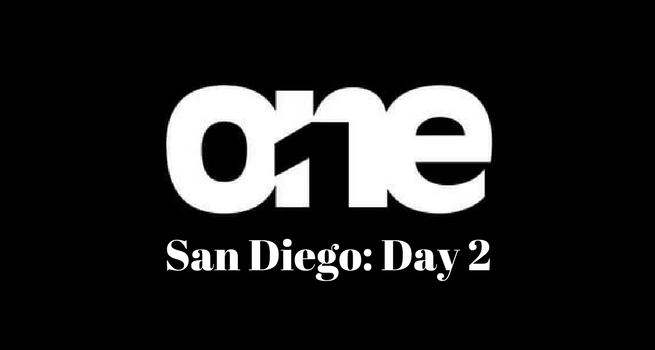 If the spirit of the One Project feels like the dawn, can you stop it? After yesterday, some people will likely wish they could, and some will thank God for new hope.

Day two of the final One Project gathering began with the familiar discussion tables rolled away and the thousand or so chairs set up in rows encircling the center stage. Song came first, then Lisa Clark Diller welcoming participants and quoting Malachi on the faithful “speaking to one another”—because, she said, “That’s what God’s people do.”

Within the time allotted, those who wanted to would be able to approach one of four microphones and say, in 60 seconds or less, what eight years of One Project conversation on the theme of Jesus had meant to them. To set the tone, Clark read words from Ephesians 2 as a prayer: We once had no hope, but Jesus came preaching peace, and now, through him we all “have access by one Spirit to the Father.” And on that high note some 30 people, many who had attended often and some who were attending for the first time, spoke. A theme they never veered from was gratitude.

One man, who told how his life had taken a new direction after the first gathering he attended, expressed his thanks, but remarked (telling a story) that gatherings had not always felt perfectly safe for persons of African descent. He meant the criticism constructively, and the room broke into affirming applause. “I was feeling I had no place in Adventism, and the One Project gave me hope,” said one speaker. “This has been my camp meeting every year,” said another.  Still another said she had questioned her Adventism—“we are so always at each other’s throats”—but the conversation at these gatherings had made her feel she could “keep working for the church.” An immigrant from Eastern Europe said the One Project had “unleashed Jesus in me,” though now his heart was “aching” to see it come to a close.

Speakers several times remarked on the pain One Project organizers must have felt for having, over the eight years, to withstand so much criticism from fellow Adventists. More than one added, besides thanks, a heartfelt “Don’t give up!”

One speaker reported on personal conversation with a highly placed Silver Spring administrator whose criticism of the One Project came down to this: “The emphasis on Jesus is really good. But they want to change the church.” The story evoked laughter. The administrator was right, of course, and the rest of the day, it turned out, would be new proof of it.

Preaching resumed with Paddy McCoy admitting a depression that came over him seven years ago while he was serving as a college chaplain. But he was invited to Atlanta in 2011 for the first One Project gathering, and there felt his sense of purpose renewed. He found that he needed “more time for Jesus,” and that thought lay behind his decision to address what the Gospel of John says about John the Baptist. When the Baptist’s disciples warned him that many were flocking to see Jesus, he called Jesus the true “Christ,” and said: “He must increase but I must decrease.” That was true for his own personal life, said McCoy, and it’s true also for the church as a whole. Less is more if the more is Jesus. And that idea was now guiding his new work as a pastor for young adults: he would care more about their “walk with Jesus than about their music or their dress.”

There was recalibration time, now with small groups turning chairs into impromptu circles, and then Sam Leonor stood up. “When I was thirteen…,” he began, and the whole talk would be a story on the theme of love for one another. In that thirteenth year of his life, his father took the family from Mexico to Orlando, where Sam was speechless in English and pestered at school by a bully. One day, having in exasperation struck the bully with a stick and then run home in fear, Sam returned to school at his father’s insistence, afraid of what would happen. A girl from his class saw him approaching, met him with her hand extended, and walked him into class.

Leonor never forgot. When he began talking about this girl in sermons, she heard, and in 2010 sent him a Facebook message. The next time he visited Orlando, they met to talk, and he learned that she’d been disfellowshipped from her church. A letter gave her permission to worship there, but she could no longer be a member. “I couldn’t do it,” she told Leonor. “I knew Jesus loved me, but his people don’t.”

Still later, in June of 2016, Leonor was in Orlando for a speaking appointment when the infamous mass shooting at a gay nightclub took place. He called his friend to asked how she was: “Not good. I’m feeling vulnerable,” she said. Then he begged her to come to the church where he would be preaching, and when on Sabbath she arrived, and finally walked with him down to the front, he noticed the huge stained-glass window at the rear, visible from where they were. It was a glorious representation of the resurrected Jesus, with both his hands extended in welcome to anyone who needed a safe and loving place. This was, he said, the Jesus of Colossians 1, the “image of the invisible God” and the “head” of the church. Then Leonor said no more, and sat down.

“I hope you’ll give me the benefit of the doubt,” said Tim Gillespie. Now he was at the podium and he wanted everyone to remember that he had served in ministry for 23 years, and most assuredly loved his church. Critics had been impatient with him and with the One Project and he had to allow, he said, that some of their criticisms were true. Still, he was going to speak his mind.

We have indeed upheld Christ, and we have done it, he said, in order to save “the primal Adventist impulse of present truth.” A focus on Jesus by no means implies that other parts of Adventist conviction don’t matter, but present truth does suggest the need for both “addition and subtraction.” Love deserves more emphasis. “We may have the truth, but if people in our church are not being loved, it’s just noise.” As for needed subtraction, he referred to what he called our “culture of deceit.” We say, for example, that we’re vegetarian and often we’re not. But Gillespie’s point was not to make a list of what is wrong. It was that we should open our lives to change. John 16:13 is a promise of guidance into deeper truth, but if “we can’t explore where the Holy Spirit leads, what’s the Holy Spirit for?”

Gillespie ended with a call for participation in congregational life. You can add and you can subtract, so if you’re not at home in a congregation, “go out and start one. At some point we have to rise up,” he said. “We can’t wait for someone to give us permission.”

Following the discussion break, Alex Bryan began to advance a simple thesis: there can be no revival without reformation, and there can be no reformation without “doctrinal reformation.” A large part of our “continual communal work,” he said, invoking a parrot metaphor, is “mastering the voice of our Master.” That is what doctrine attempts to do, or we fall “far short” of authenticity. Then Bryan called for “a state of permanent doctrinal renovation and renewal.” As Jesus broke new ground—“You have heard it said, but…”—so must we. This may be “dangerous territory,” but it is territory the Adventist pioneers themselves embraced. When our church is lapsing into “creedalism,” it is time for a “living theological spirit.” When it is focused on doctrinal “lists,” it is time to acknowledge that lists leave out crucial points, overlook “levels” of importance, act like “creedal cement.” The way forward is a “new engagement with the story of Jesus,” a never-ending effort to speak in his “voice,” effort that is, indeed, “the work of everyone.”

As had often happened in San Diego, participants arose and applauded. It was the last sermon of the last gathering. Japhet De Oliveira arose to lead participants into the “traditional” final blessing, but he was immediately interrupted. Fellow One Project leaders wanted to thank him for being chief organizer through all the years, and to publicly anoint him with oil and repeat their blessing upon him. Appreciative applause broke out, and De Oliveira was moved. Then he led everyone into the ritual. Tiny wooden trays, pooled with oil, were available throughout the room, and participants took turns anointing one another on the hand. The blessing they repeated, addressing each other by name, began: “May Jesus bless you with gentleness and a heart that is tender.” May he, it went on, give you “strength against all principalities,” along with “compassion and care” and “courage” and “understanding” and “the power to make Jesus All.”

What would be next? De Oliveira said the last words. What’s next would involve waiting on the Lord, listening for new clues to transformation. There would be further conversation; people would still get together. He was cryptic, but what he said was still a promise. The One Project was over. Its spirit would go on.

Further Reading:
Is Jesus the Fundamental Belief? A Report from San Diego: Day 1

The One Project logo courtesy of The1Project.org.