Is Jesus the Fundamental Belief? A Report from San Diego

Is Jesus the Fundamental Belief? A Report from San Diego 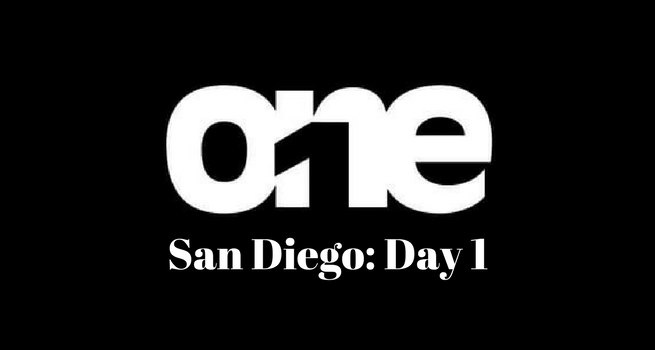 Is Jesus all? Is Jesus the focus, the center, the foundation? Is Jesus the fundamental belief among all the others, the single criterion of every conviction the church holds dear?

From the beginning, at least some Adventists, including Ellen White, have said Yes, and since the month of July in the year 2010 the leaders of the One Project have been urging us all to say Yes. One Project “gatherings” have swept through the church’s older strongholds, and worriers who suspect surprises from below—ones that proceed without sanction or supervision from the General Conference—have wrung their hands and muttered their dark warnings. But enthusiasm has persisted.

“Jesus. All.” If that was the refrain that would not go away, the actual One Project—the two-day preaching and worship festivals so many have come to love—is coming to an end. The last gathering, so the leaders say, is the one that began yesterday in San Diego. Again hundreds of people, nearly a thousand, have come to a hotel to sing and to listen and to ponder, or “re-calibrate.” By tomorrow, they will know more about why the pastors who started all of this think it’s time for some new thing.

The first song said “forever.” God is loving, faithful and strong—forever. Moments later worshippers sang Jesus: “Jesus, You alone are worthy.” “Soon and coming Savior,” they went on, “We will glorify your name.”

After the singing the 18-minute sermons began, words of Scripture proclaimed from the platform at the center of the hotel meeting room. The rich-voiced Dilys Brooks began her reflection on “the Sons of Thunder” with unaccompanied intoning of “Oh, How I Love Jesus,” the theme of the final gathering. Then she told the story of her own calling through the lens provided by these two characters from the Jesus story, neither of whom was admirable from the start.

Transformations take time, she said. All Christians are “works in progress,” and it’s “not okay to marginalize” anyone. People will “know who we are” when we love one another.

Karl Haffner followed, again taking a New Testament story of the people in Jesus’ life as the basis for reflection. He zeroed in on the woman who anointed Jesus’ feet at Simon’s dinner party—and on the comfort she heard: “Your sins are forgiven, go in peace.” Riffing on the overall theme of the gathering, he said, “Oh, How I (Want to) Love Jesus.” In the church of Christ, we must welcome others as Jesus welcomed the woman.

Listeners seated at tables shifted now to conversation about what they had heard, continuing the One Project pattern: You listen and you ponder—together. Conversation in indispensable.

William Johnsson spoke on the “forgotten women of Galilee” described in Luke 8. Jesus’ followers—his disciples—included women, some well-off and even well-connected, like Joanna, whose husband was the manager of Herod’s household. The New Testament pictures her and other women as unconfined by their domestic roles and as leaders in the financial support of Jesus’ ministry. Johnsson lamented the way the developing church came to push women aside even though they served well during Jesus’ life on earth and were the first to report his resurrection. “Who dares now,” Johnsson asked his applauding listeners, “to stand in their way?”

Brandy Kirstein took Psalm 22 for her text, and considered how, in his darkest hour, Jesus himself asked why God had forsaken him. Her remarks touched on human vulnerability. We may be honest to God, express what we feel, pose our questions unashamed. Kirstein ended with words of pain taken from her own journal, a reminder that sermonic reflection must return again and again to acknowledgement of hurt and of the doubt that goes along with it.

After the ample lunch break, participants returned to song and word. Chris Oberg spoke on Mary and Martha and their brother Lazarus, dead four days in the story John 11 tells. When Jesus finally arrived, Mary exclaimed: “Lord, if you had been here, my brother would not have died.” Oberg said, “Mary’s my girl,” meaning to express the sadness and frustration she herself feels when death intrudes, or when dreams of justice (as in the case of the church’s regard for women) are again and again deferred. But the story, Oberg said to conclude, evokes hope. Lazarus came forth from his tomb; dark endings need not be the final word.

Terry Swenson took the story of the disciples at sea, buffeted by wind and fear and the sense of the demonic. In their time the sea was an adversary, a source of chaos, and their “man-made boat” seemed no match for it. But Jesus came walking on water and offering assurance, and he invited his disciples to walk on water themselves. Peter responded, then fell short in faith. But Jesus rescued him, and the point remains to this day. “You were created,” Swenson said, “to be water-walkers. Get out of the boat. Change the world.”

After another re-calibration break, Laurence Turner turned attention to Joseph. He lost his reputation as a “righteous” man, or tzadik, when he chose “courageous righteousness” over the letter of the law, or Torah, which required him to renounce and publicly repudiate Mary for being pregnant out of wedlock. Turner suggested that when Jesus sat, as a boy, at the feet of his disgraced father, learning the meaning of his tradition from someone their small village now looked down upon, he acquired the sensitivities that would enable him to welcome sinners. Against those who today define righteousness by the letter of the law and look askance at “those who don’t shape up,” what Jesus learned and lived remains the ideal for all disciples.

When a leper outcast begged for healing, Jesus made him whole. Iki Taimi, himself familiar with being an “illegal immigrant,” made this story the basis for a reflection on “access”—on how Jesus gives all who live on the margins a path into community and renewal of life. Taimi told bracing stories of his own acceptance by academy teachers and administrators. These were people, he said, who saw him “as a person” and helped him become the pastor that he is today.  Such is the job of all whom Jesus anoints for service.

Table talk ensued again. Then Randy and Austin Roberts, father and (millennial) son, made two stories from Luke—one about the rich young ruler, one about the thief who gave himself to Jesus at the very end of life—a window for looking at inter-generational cooperation. The young have the potential to make a great difference, said the father; those not so young can also offer themselves, said the son.

Mark Witas interpreted the story of Jesus and the woman at the well, herself a Samaritan and many-times divorced, as the embrace and empowerment of a victim. Divorce was then the prerogative of men, and women suffered under its unforgiving lash. The woman Jesus met had lost all self-esteem, but he spoke to her with unexpected kindness, offered her “living water,” and appointed her to an evangelistic mission. Women today all too often feel what Witas called the “scorn of the remnant,” but Jesus by his example at the well rebukes such scorn and offers hope to all who have been hurt.

Paddy McCoy introduced the Lord’s Supper that brought the day’s activities to their climax. Did the taking of the symbols, the food and drink that Jesus offered, renew the participants in their solidarity with him? That is what McCoy prayed for, and what the One Project has been urging Adventists these past eight years to think through. On day two in San Diego the work continues.

Further Reading:
Do They Want to Change the Church? The One Project: Day 2

The One Project logo courtesy of The1Project.org.