The Professors Valentine Expand Upon Chapter 1 in "Where Are We Headed? Adventism After San Antonio"

The Professors Valentine Expand Upon Chapter 1 in "Where Are We Headed? Adventism After San Antonio" 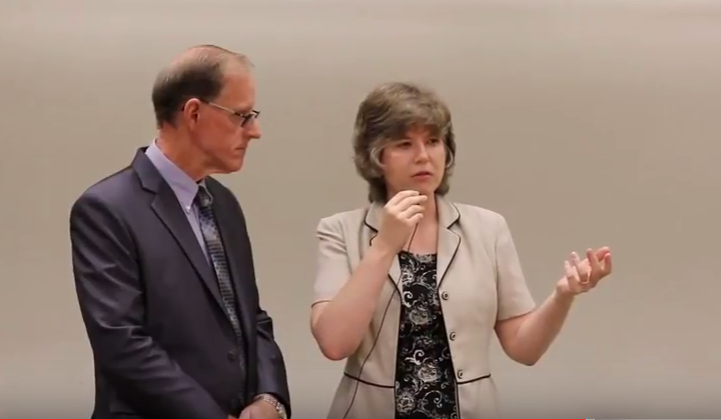 Drawing upon their different resources and experiences, Gil Valentine and Kendra Haloviak Valentine elaborated on Chapter 1 in Where Are We Headed: Adventism after San Antonio by William G. Johnsson on June 24 at the Roy Branson Legacy Sabbath School in Loma Linda, California. The title of this chapter is “Women’s Ordination: The Battle is Over.”

William G. Johnsson, a New Testament scholar and Seventh-day Adventist missionary to India, long served as the editor of the Adventist Review.  Kendra Haloviak Valentine is also a New Testament scholar. A professor for several years in the H.M.S. Richards Divinity School at La Sierra University, she is now shouldering administrative responsibilities on that campus as well.

Gil Valentine, who has long served as an academic administrator in different parts of the world, is now preparing others to do the same kind of work in the La Sierra University School of Education where he is a professor. In addition, he is among the most accomplished contemporary scholars of Seventh-day Adventist history.

Perhaps surprising to those who are aware of what happened at the 2015 meetings of the General Conference in San Antonio, Texas, Johnsson holds that the practice of ordaining men and women on an equal basis among some Adventists has prevailed and that it will become official policy in the not-so-distant future.

His confidence about this might seem to differ with his apprehensions about the denomination’s future in other respects. He believes that ordaining women should happen and that it will. There will be those who will disagree with him on one or the other or both of these and act accordingly.  This is why people on the many “sides” of this discussion should pay attention to what he says.

Instead of confronting Johnsson’s thesis in strong agreement or disagreement, the professors Valentine proposed different interpretations of some of the evidence. It was probably easy for Johnsson to accept their suggestions.

In keeping with his work as a historian, Gil Valentine described the discovery by another scholar of documents in the archives of the United States that explicitly state how the federal government understood the official Adventist policy about ordaining women at different moments in the denomination’s history.

Kendra Haloviak Valentine described what it was like recently to be a member of one of the denomination’s most important official commissions to study the topic. She summarized some of the issues that the taskforce studied plus some of the feelings that its participants experienced.

My impression was that the issues tended to cluster the participants one way but the feelings tended to gather these same participants in a different way. Knowing what a person believed apparently turned out not a precise predictor of his or her feelings. This is the sort of thing that makes the professional lives of social psychologists worth living!

Alan Alipoon, a professor in the Loma Linda University School of Allied Health, thankfully recorded this video. Other videos on the Internet are available at or through bransonlegacysabbathschool.com. Requests to be added to the email list or other correspondence may be sent to bransonlegacysabbsathschool@aol.com. The participants in RBLSS are thankful for this opportunity to make these videos available to a larger audience.

WATCH: Gil Valentine and Kendra Haloviak Valentine on Chapter 1 in "Where Are We Headed?"

See also: William G. Johnsson Explains Why He Wrote Where Are We Headed? Adventism after San Antonio