William G. Johnsson Explains Why He Wrote Where Are We Headed? Adventism after San Antonio

William G. Johnsson Explains Why He Wrote Where Are We Headed? Adventism after San Antonio 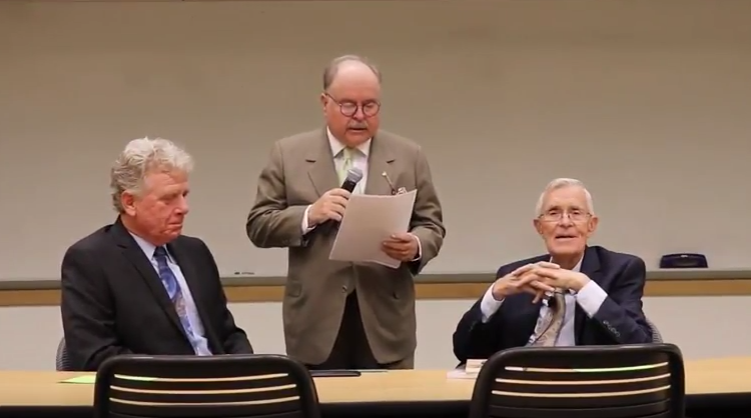 William G. Johnsson, longtime editor of the Adventist Review and Adventist World, explained in an interview at the Roy Branson Legacy Sabbath School on June 17 why he wrote his most recent book. Its title is Where Are We Headed? Adventism after San Antonio. Oak and Acorn Publishing, which released it earlier this year, is a new endeavor of the Pacific Union Conference of Seventh-day Adventists. I did the interview.

Johnsson said that he wrote the book first of all because he needed a catharsis after watching on television the proceedings of the denomination’s 2015 General Conference in San Antonio, Texas. Three things especially disturbed him. He was disappointed by some of the decisions which the delegates from all parts of the world made. Yet this did not unduly upset him because he had lost many votes over the decades with no lasting ill effects.

He was more disturbed by the procedures that some delegates used when the group as a whole was making its most important decisions. It was as obvious from his home in Loma Linda, California, as it was to many in the huge auditorium at San Antonio, that some were using parliamentary procedures to consume time and to prevent those with whom they disagreed some from speaking.

Worst of all, he was appalled by how some of the delates disrespectfully booed former General Conference President Jan Paulsen because they disagreed with some things he said from a standing microphone on the floor. He was stunned that not one of the leaders on the platform reproved them and admonished them to act more respectfully. This was his emotional reason for writing the book.

His cerebral reason for doing so was that his dispassionate mental review of Seventh-day Adventist history identified no more consequential meeting of the General Conference. Many pinpoint the 1888 gathering as the most decisive one. His reflections yielded the conclusion that, if time as we know it should last that much longer, historians of Adventism will identify 2015 as even more significant than 1888. This is because at San Antonio long lasting denominational fault lines slipped and broke apart and the earthquakes and aftershocks have crushed much.

Devoting one chapter to each in his book, Johnsson identifies ten longstanding controversial issues among Adventists that have become even more difficult since San Antonio. These are women’s ordination, remnant theology, the “delay” of the Second Coming of Christ, defining the “Gospel,” church organization and administration, evangelism, interpreting Scripture, Adventism’s “promise” and denominational unity.

Many Adventists would agree with Johnsson that San Antonio made a large and perhaps lasting difference; however, in their view its continuing consequences are not bad but good.

Johnsson apparently believes that the way to go forward is to go forward. They believe that going backward, returning to more traditional beliefs and practices, is actually the best way to move ahead.

Christian history shows that, depending upon the circumstances, both strategies have succeeded and both have failed. Perhaps progress best occurs when on a case-by-case basis there is some combination of both moving forward and moving backward. Maybe the life of a Christian individual or group is more like a dance than a march. This is something on which everyone should be able to agree!

WATCH: David Larson’s interview with William G. Johnsson about his book Where Are We Headed: Adventism after San Antonio