On Becoming a Pebble: The Name God Gave Simon

On Becoming a Pebble: The Name God Gave Simon 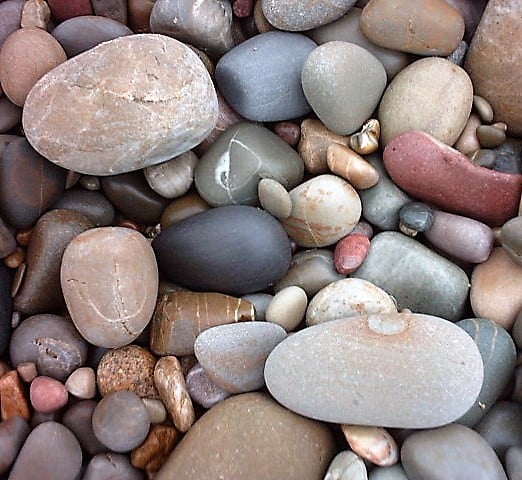 As far as I can tell, it happened only six times in the Bible. For God to personally name a mortal is a rare and significant event. In the Hebrew culture, names of children were usually indicative of either the time in history when they were born or wishes for the development of their character. Later, the use of family names became more common. When God chose to give a particular name to someone, it seems to have been a response to a specific event or issue in his life as well as an object lesson for the rest of us.

Adam or adama means red earth. What does it say to you that the first human name created on this planet is a descriptor of the soil from which mortals were formed? Abraham means father of many, a millennia-large promise to a barren couple and a reminder to the rest of us that nothing is impossible with God’s grace. Jacob’s name literally means follower. It became proverbial for one who is deceptive. Fleeing from Laban and afraid of Esau, at night by the Jabbok he wrestled through the dark hours with God. At daybreak, God renamed Jacob Israel, he who struggles “because you have struggled with God and with men and have overcome.” God named the infant Solomon Jedidiah, friend of God, at a time when many might have considered him cursed because of his father’s multiple betrayals. And then Jesus Christ was born in Bethlehem: Jesus means Yaweh saves “because He shall save His people from their sins.” Christ is translated anointed one, smeared with sacred oil in a ceremony of dedication. The name was a divine empowering of task and office.

The renaming of Simon was no less pivotal. When Andrew brought his brother to meet Jesus,

Jesus looked at him and said, you are Simon, son of John. You will be called Peter (petros) (John 2:42).

Petros describes a small individual stone, a pebble. Linguistically, the term can be used in contrast to petra, the bedrock. Notice the prophetic nuance in Jesus’ language. Jesus is saying that Simon will someday grow into the name Pebble. He is not ready for it yet. Later in time when Peter acknowledged Jesus as Messiah, his Lord would say to Simon,

And I tell you that you are Peter (petros), and on this rock (petra) I will build my church, and the gates of Hades will not overcome it (Matthew 16:18).

In the Psalms, God is referred to as a rock, sur: a focus of stability, a place of security and safety. Jesus called himself the Cornerstone or Foundation, petra. He is the Rock on which the church was built. He is the One who could not be overcome. From their introduction, Jesus knew that Simon would come to understand the role of the Christ and the role of the follower: Foundation Stone and small part of that stone. He also understood it would take Simon quite the journey to get there.

I believe Peter was already being led by the Holy Spirit when he met Jesus. How else could this Roman-hating, impulsive, muscular, net-lugging, Galilean team leader of a fishing fleet choose to build a relationship with, and follow, Someone who had just predicted that he would end up as a pebble? That said, most know Peter’s journey to understand his connection with his Friend and Savior—that he was a pebble part of the Foundation Stone, would be…well…would be interesting.

With the rest of the disciples, Peter saw the miracles, heard the parables, learned to see the sophistry of the Pharisees, participated in the witnessing internships, helped feed several thousand people (twice), faced demons, and increasingly grew to better understand Heaven’s values. Four events stand out for me as turning points in Peter’s individual journey: his walk on the water, his acknowledgement at Caesarea Philippi, his denial in the high priest’s court, and his restoration by the Sea of Galilee.

Soon after the death of John the Baptist and the feeding of the five thousand, Jesus sent the disciples on a journey to Gennesaret by boat.

They became buffeted by wind and waves. Right before dawn Jesus went out to them, walking on the lake. When the disciples saw him walking on the lake, they were terrified. “It’s a ghost,” they said, and cried out in fear. But Jesus immediately said to them: “Take courage! It is I. Don’t be afraid.” “Lord, if it’s you,” Peter replied, “tell me to come to you on the water.” “Come,” He said. Then Peter got down out of the boat, walked on the water, and came toward Jesus. But when he saw the wind, he was afraid and, beginning to sink, cried out, “Lord, save me!” Immediately Jesus reached out his hand and caught him. “You of little faith,” he said, “why did you doubt?” (Matthew 14:26-31).

Clearly, I cannot read Peter’s mind. That said, I think the answer to Jesus’ question may have been, “I thought with your invitation I could walk on water. I realized I couldn’t do this on my own. I got scared. I had to call for help. I am glad You were there.” He was no different from many of us who, because we are Christians, take on tasks or adventures without realizing that the goal is not dependent on us but on the One who is leading the larger project. What I appreciate about Peter is that he did not let his probable embarrassment get in the way of his growing relationship with, and understanding of, Jesus. I think that was a large step toward understanding what it means to be the small stone in the protection of the Foundation.

Later, when Jesus came to the region of Caesarea Philippi, he asked his disciples, “Who do people say the Son of Man is?” they replied, “Some say John the Baptist; others say Elijah; and still others, Jeremiah or one of the prophets.” “But what about you?” He asked. “Who do you say I am?” Simon answered, “You are the Messiah, the Son of the living God.” Jesus replied, “Blessed are you, Simon son of Jonah, for this was not revealed to you by flesh and blood, but by my Father in heaven. (Matthew 16:13-17).

At this point Jesus changes a prediction to present tense.

I tell you that you are Petros and upon this Petra I will build my church.  (Matthew 16:18)

I wish that Peter could have held on to his revelation that Jesus was the Cornerstone, the Safe Place, the One who could not fail, the One who would protect, and the One who loved him. Like many of us in dangerous times, on crucifixion Thursday, in the courtyard of the high priest, Peter regressed. He forgot that he was only a pebble who did not have to be in charge of his own safety. He denied his relationship with Someone he loved because he was afraid it would cause himself harm. I cannot judge him because I, like many of us, have done something similar. What I appreciate about the impulsive fisherman is that he went outside and wept bitterly and yearned for restoration and reconnection to the Cornerstone…

On the Sea of Tiberius, in a near exact replication of an event three years earlier, the resurrected Jesus filled a fishnet and cooked breakfast. He then went on to officially restore Peter’s relationship with Him and to clearly reinstate Peter into his former place in the community of disciples. Addressing Petros by his old name, Jesus said:

Three affirmations for three denials. An acknowledgement of love before an assignment of task. An understanding of Who was in charge before a fitness to be an under shepherd. A willingness to be a pebble in the work of the Cornerstone, to rest in the leadership, guidance, and safety of the One who is stability and security.

Peter was humbled to face the lessons of the future where he would learn the prejudice he must set aside. This growth helped him develop into one of the safe leaders for the new church. Much later he began his second letter by acknowledging what it means to be a small part of the Cornerstone:

His divine power has given us everything we need for a godly life through our knowledge of Him who called us by his own glory and goodness. Through these he has given us his very great and precious promises, so that through them you may participate in the divine nature (2 Peter 1:3,4).

He could feed the sheep because he had learned what it means to be part of the Cornerstone: a pebble.