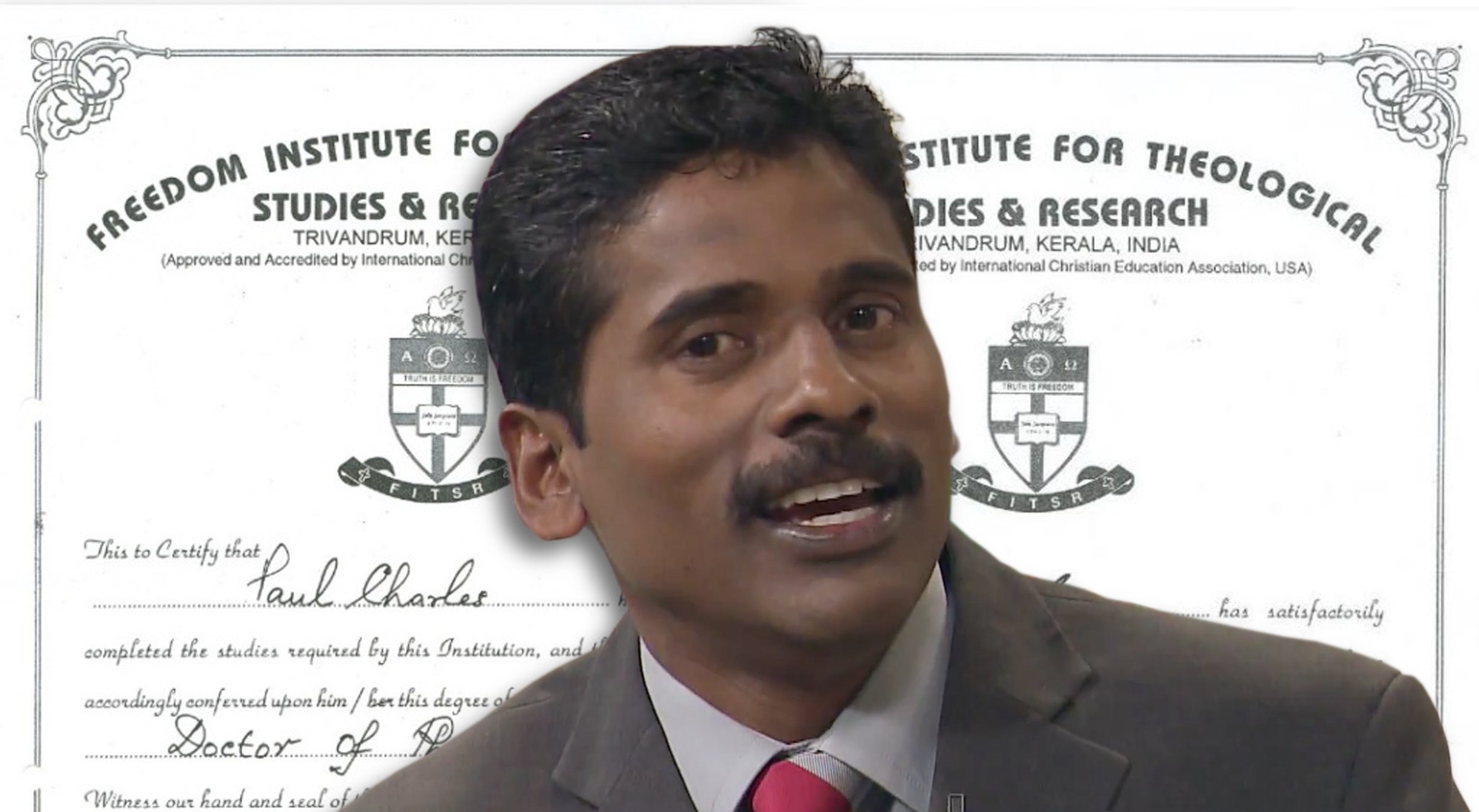 An article published in a South African newspaper concerning the qualifications of two top Seventh-day Adventist leaders has created waves from the Southern Africa-Indian Ocean Division all the way to the General Conference in Silver Spring, Maryland.

On April 14, The New Age, a national daily newspaper with a claimed daily distribution of over 100,000 copies that covers the nine provinces of South Africa and international news, published “Church degree scandal,” an exposé on the alleged falsification of doctoral degrees by Paul Ratsara, president of the Southern Africa-Indian Ocean Division (SID), and Paul Charles, director of communication for SID.

The New Age’s article presents charges from South African church members who allege that both Charles and Ratsara have used false qualifications to ascend to well-paying, powerful leadership positions within the Seventh-day Adventist denomination.

The article called into question Paul Ratsara’s 2014 doctoral degree from the University of South Africa (Unisa) and Paul Charles’s Master's and PhD degrees from the seemingly non-existent Freedom Institute for Theological Studies and Research.

SID leaders have issued a response to the allegations, vigorously defending Ratsara’s qualifications and have circulated pictures of his graduation ceremony from Unisa and his doctoral certificate. The response states, “Dr. Ratsara received his Doctor of Theology Degree in Systematic Theology in 2014 from the University of South Africa (UNISA). UNISA is the largest university on the African continent with more than 300,000 students ‘The degree was conferred at a congregation of the University on 8 September 2014,’ wrote IH Brown, Manager: Division Graduations, University of South Africa in a letter dated 17 April 2015.”

Ratsara has also produced an image of an honorary Doctor of Divinity degree from Solusi University, an Adventist institution in Zimbabwe.

In contrast, SID has only said of Charles, “Dr. Paul Charles earned his PhD in Missiology from the Freedom Institute of Theological Studies and Research in India, private, non-denominational institution.”

The scrutiny of Charles’s allegedly fraudulent doctoral degrees has only increased since the publication of the article in New Age. Charles, whose new job as Associate Communication Director for the General Conference would likely entail handling difficult public relations situations on behalf of the Worldwide Adventist Church, has declined to comment on the specific allegations against him, and has thus far produced no evidence that his degrees are legitimate aside from pictures of the degrees. Charles did not respond to requests for comment on this story.

Hitting out against the charges through his personal Facebook page, Charles wrote on April 22,

Every time the Lord changes my appointment, somebody is disturbed and some are excited because I am a constant reminder of what might have been for some and what is possible for others who trust in the Lord. My new appointment has caused some to raise the same questions again. For some time - I have received threats of going to court, exposure in the media, etc because of some allegations that my PHD is not genuine. Even though I was cleared many times by due process. The people who studied with me know otherwise and my documents prove otherwise as presented and accepted in my church. I have been exonerated officially and am free from guilt and blame...I did complete my PhD in an honest way and have no intentions of answering questions that were raised and answered satisfactorily by and to the church.”

(NOTE: prior to this story's publication, we found the post no longer appeared on Charles's Facebook page.)

Paul Charles’s questioned degrees (a second doctorate, purportedly from Canterbury University, has not been produced) play a key role in his personal narrative, a story of his overcoming significant challenges to become a top leader in the Adventist denomination.

“Paul Charles—From Poverty to PhDs,” a segment released in 2013 by the Hope Channel’s “Let’s Pray” program (which operates under the auspices of the General Conference), describes Charles as holding two PhDs—in missiology and leadership, respectively—with studies underway for a third degree from the University of South Africa. The video description on YouTube says, “Paul Charles holds not one, but two, PhD degrees and is an active leader in his church in South Africa. This is true, in spite of the fact that he grew up in extreme poverty. Hear his story of God's power to lift and transform."

Costa replied by email, "Mr. Charles accepted the position and his job offer has not been rescinded at the GC. Carefully the Church is searching about the accusations but the research has not finished; this is why, at the moment we (SID and/or GC) don't have a final statement to issue."

Liberty Institute, the university from which Charles claims to have received both his master’s and doctoral degree, has no physical address and no website. It is not an accredited institution in India, according to Dr. Shaheeda Essack, Director of Private Higher Education Institutions for the South African Department of Education and Training.

The primary mentions of the Freedom Institute online pertain to The New Age’s article in which the charges of fraud first surfaced publicly.

Bernhard Ficker, a lay member of the Adventist Church in the Cape Conference, shared the following concerns regarding Charles’s degrees: 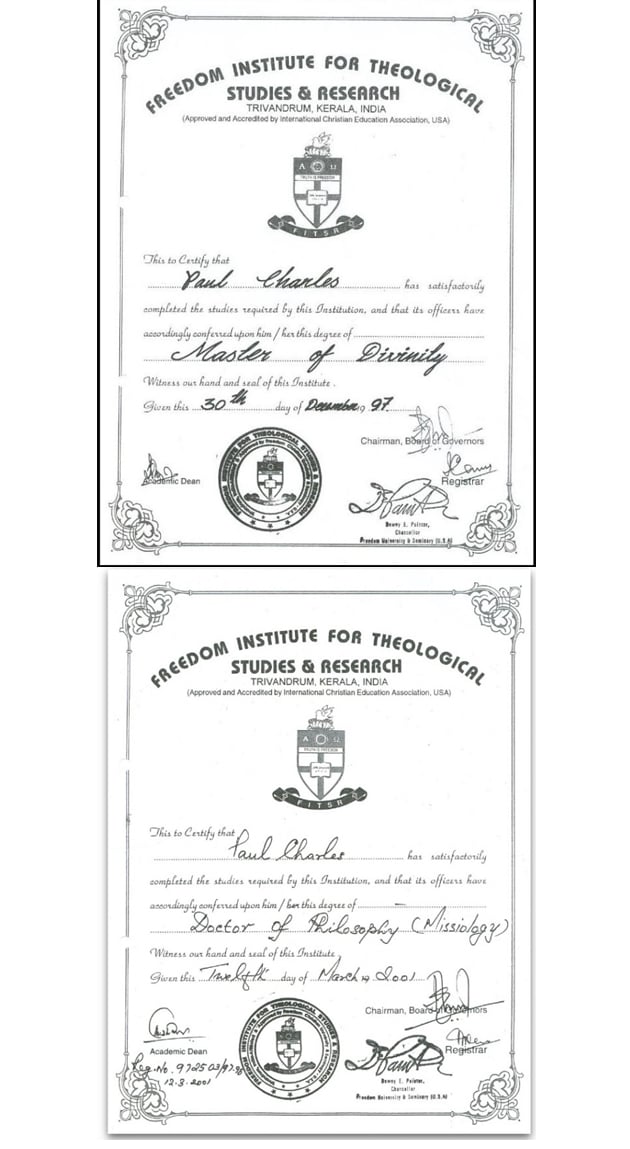 On his LinkedIn profile, Dr. Painter lists work with "American Indian peoples," but makes no reference to India or to Freedom Institute. When contacted about his signature on the certificates, Painter flatly denied any involvement:

Have no idea how my signature was on these documents.  If you look at them closely you will see the signature on both are identical.  I can never sign twice the same way if I tried.  Suggest you contact them to explain?  Also if you have their contact info I will contact them asking why they used my name?

The International Christian Education Association (ICEA), which according to the certificates accredits Freedom Institute, maintains a very sparse website with no mention of Freedom Institute anywhere on it. The address ICEA gives for its headquarters belongs to the Ward Evangelical Presbyterian Church in Northville, Michigan.

On his Facebook page, Charles has removed information about his doctoral work from his profile. At present, his education bio reads, “Studied Religious philosophy at Spicer Memorial College.”

Alvin Masarira, a lay member from Johannesburg, South Africa and an Engineer at Structural SIMTech Consulting, has noted that fake degrees have become a scourge on large organizations in South Africa.

We have had cases of academics in Universities who don't have the PhD they listed. There was the case of the Vice-Chancellor of Tshwane University of Technology, Johnny Molefe, whose PhD turned out to be [fraudulent]. Then there was Mohau Peko (South African ambassador) who also had a fake PhD. Then Pallo Jordan's phantom doctorates (from University of Wisconsin-Madison or the London School of Economics), and ‘Dr.’ Mthimkulu, Chief Engineer at PRASA.”

The New Age stated that another Seventh-day Adventist, KwaZulu-Natal and Free State President Clifford Nhlapo, lost his position as president two years ago after the South African Qualifications Authority (SAQA) confirmed his qualification was falsified.

“Nhlapo confessed that his postgraduate qualification was obtained from an unaccredited institution and urged other leaders to come clean on their qualifications,” The New Age reported.

Both Ficker and Masarira contend that there should be an independent inquiry into Charles’s degrees and his alleged protection by the Southern Africa-Indian Ocean Division leadership. Masarira goes further, saying that given the perception “that this matter has been ignored (in spite of calls to look into it) I would like to propose that all our church leaders (SID and Unions and Conferences in SID) have their academic qualifications verified. This is not to embarrass anyone but to restore the trust we church members should have in our leaders,” Masarira said.

Ultimately, the allegations of falsifying academic credentials do not suggest a lack of qualification to serve since terminal degrees are not an absolute requirement for holding high elected office in the Adventist Church, nor do they suggest a lack of competency (we spoke with members of the General Conference Communications Department who suggest Paul Charles would be a competent departmental associate). The allegations raise questions of personal integrity and of trustworthiness—the good-faith selection of Adventist leaders presumes uprightness in how candidates present themselves. Secondarily, the episode may suggest the necessity of more stringent vetting criteria for committees that appoint denominational leaders.

UPDATE 1: Just before this article's publication, New Age published a second article on its website stating that according to Khaye K. Nkwanyana, Media Liaison Officer for South Africa's Department of Higher Education and Training, the falsification of a degree violates section 66(2) of South Africa's Higher Education Act of 1997, and could lead to charges of criminal fraud.

UPDATE 2: This article identified Clinton Plaatjes as a source for initial news reports. Upon further investigation that was found not to be the case.

UPDATE 3: Spectrum has published a follow-up report that includes a response from the Southern Africa-Indian Ocean Division.