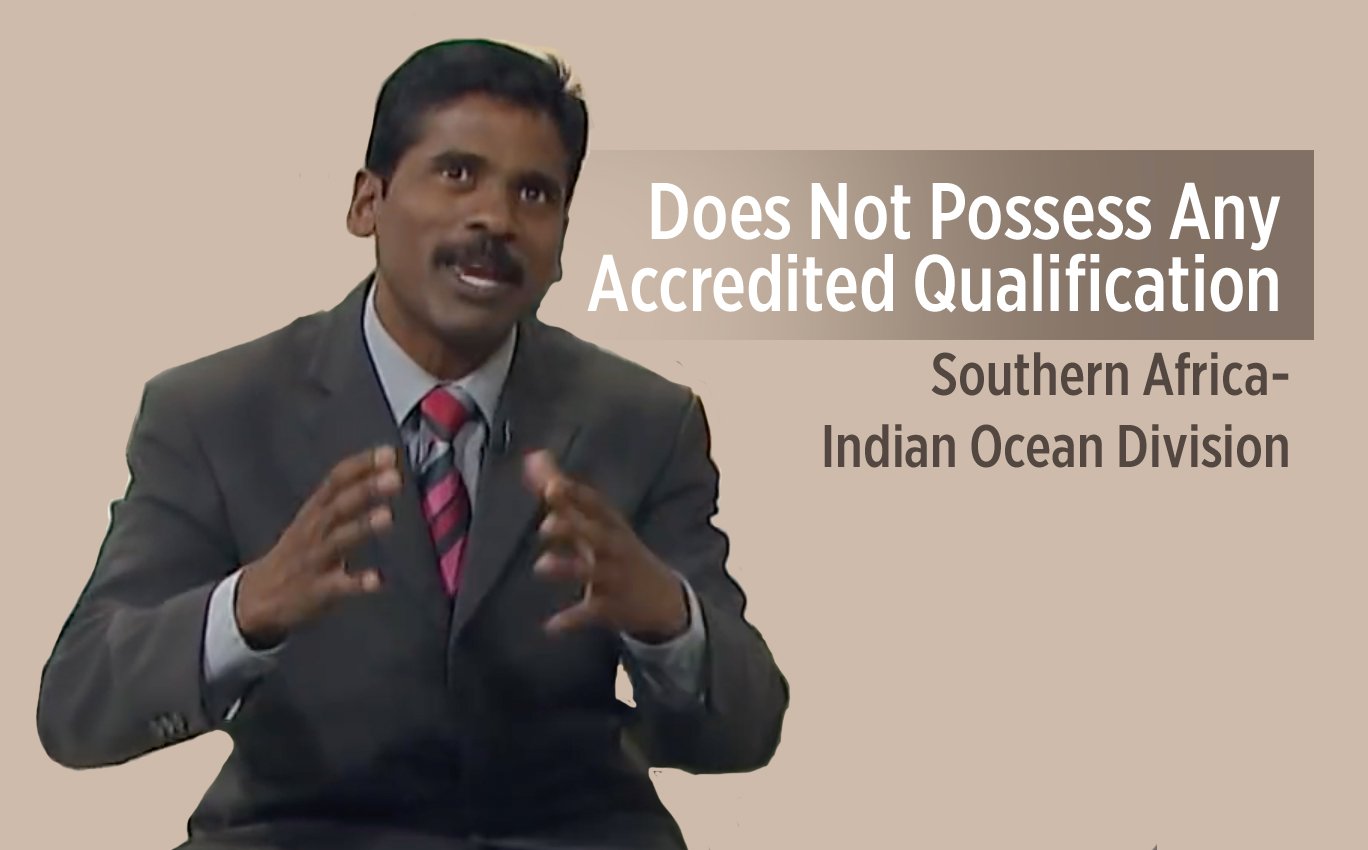 In response to a spate of articles published in Adventist and secular media concerning allegations of fraudulent doctoral degrees being used by Southern Africa-Indian Ocean Division of Seventh-day Adventists (SID) Communication Director Paul Charles to advance his career, SID leaders have written a Statement On Pastor Paul Charles' Qualifications. The statement, attributed to the Southern Africa-Indian Ocean Division, is published by the division's communication department of which Paul Charles is still acting director (he has been appointed Associate Communication Director for the General Conference, but has not yet made the move to the United States).

Church members in the division have also raised questions about the doctoral degree obtained by Division President Paul Ratsara, to which SID leadership responded, categorically denying accusations of foul play. The Paul Charles' Qualifications statement comes over two weeks after the division's response to an initial report in South Africa's New Age newspaper alleged that both Charles and Ratsara had acquired their degrees fraudulently.

In the Paul Charles' Qualifications statement, SID leaders note that "a consulting committee [whose task it was] to inquire into these allegations, has come to the conclusion that Pastor Charles undertook his studies at unaccredited institutions and consequently, he does not possess any accredited qualification." The statement goes on, "Even though in its practice SID does not encourage its employees to study at unaccredited institutions, Pastor Charles has not misrepresented facts about where he obtained his qualifications to the Church."

Seventh-day Adventist Church members in SID have asked to know the composition of the consulting committee charged with looking into the fraud charges. Citing confidentiality concerns, SID leaders have declined to provide that information.

The statement's three primary claims are significant: 1) a committee was formed to investigate the allegations concerning Charles' qualifications, finding that 2) Charles does not hold degrees from accredited institutions, and 3) the statement asserts that Charles did, in fact, study at Freedom Institute for Theological Studies and Research, and therefore did not mislead the church concerning the degrees he obtained.

In a letter dated April 29, 2016, Gordon E. Christo, Director of the Adventist Heritage Centre in the Southern Asia Division of Seventh-day Adventists and former Dean of the School of Theology at Spicer College, has come forward to corroborate the existence of Freedom Institute from which Charles states he received a master’s and doctorate degree.

“To Whom It May Concern:

This is to state that I [Christo] was acquainted with Freedom Institute in the 1990s. I had agreed to serve as a doctoral research guide for them and received a prospectus which included all the courses, subjects and degrees which they offered through distance education. A few students on the campus of Spicer College registered for various programs listed. Paul Charles was one of them.

Freedom Institute definitely existed. I can confidently testify that Paul Charles did not produce his own certificate nor forge any signature on it.”

By putting the issue of "accredited qualifications" front and center (a letter from the South African Department of Higher Education and Training on this matter stated that purporting to hold a degree from an unaccredited institution could constitute criminal fraud in South Africa), the statement ignores other problems.

Primary among the problems pertaining to Freedom Institute is that the institution has no physical address and no online presence at all and that the man whose signature is apparently stamped onto the degrees Charles has presented, Dr. Dewey Painter, has denied in writing having had anything to do with the degrees. Nor does the statement address the fact that Charles has gained significant institutional capital by using two claimed PhDs—in missiology and leadership, respectively—as evidences of God's leading in his compelling personal narrative of overcoming hardships. Documentation of the second PhD, purportedly from Canterbury University, has not materialized. Charles also stated for a 2013 interview with the General Conference-owned and operated Hope Channel that he was working on a third doctoral degree from the University of South Africa (Unisa). No evidence of his enrollment there has surfaced thus far.  NOTE: On May 27, 2016, we received a message from the Hope Channel alerting us to the fact that this video had been deleted from the Hope Channel's YouTube account.

A growing group of concerned church members in the Southern Africa-Indian Ocean Division has expressed further worries about SID’s characterization of Charles’ qualifications. Rather than validating the legitimacy of Freedom Institute, they see Gordon Christo’s statement of Spicer’s collusion with Freedom as impugning Spicer’s legitimacy.

“Did they have authority to work with Freedom Institute? It seems unlikely that the SDA accrediting system would have allowed them to be contaminated with this fly-by-night and partially fake Freedom Institute where you can get 'quickie' doctorates,” the group said in a statement.

Going on, the church members note, “All academic institutions which have closed down still have a web presence and the failure of of Freedom to have any presence points to it being a farce (although it had a farcical presence at one stage). Why did Spicer not point out their working relationship with Freedom when enquiries were made a while ago?”

The church members also assert that they have not been shown evidence that Charles completed his studies at Spicer Memorial College before pursuing graduate studies elsewhere.

Implicitly, the Adventist Church in South Africa concedes that Paul Charles has been improperly (at least in the eyes of South African law) presenting himself as a double PhD. The SID statement on Paul Charles' qualifications indicates that Charles has agreed to no longer represent himself of a holder of two doctoral degrees, but states nevertheless that the division finds nothing that disqualifies him from serving:

However, in view of the sensitivities of studying at unaccredited institutions with our national education system in South Africa, the church has requested him to cease and relinquish the use of any titles associated with those unaccredited degrees. And further, to complete his studies at an accredited institution. Pastor Charles has agreed to do so in respect of the South African national standards. While respecting the issues of national education standards, the fact that Pastor Charles has elected to relinquish the titles associated with those degrees does not, in our view, diminish his calling as a Pastor within the Church."

UPDATE: Since this article's publication, a flyer has surfaced for a 2012 Adventist-layman's Services and Industries (ASI) South Africa Union Conference event at which Paul Charles provided devotionals. The event flyer lists Charles as holding a PhD in Management (no mention of degrees in in missiology and leadership) and as being the author of many books including: The Wheelbarrow Kid, Unlocking the Secret of Oprah Winfrey, Dynamic Christian Leadership... in a Secular world, Revolutionary Preaching ... in a Secular World.