The Sermon on the Mount 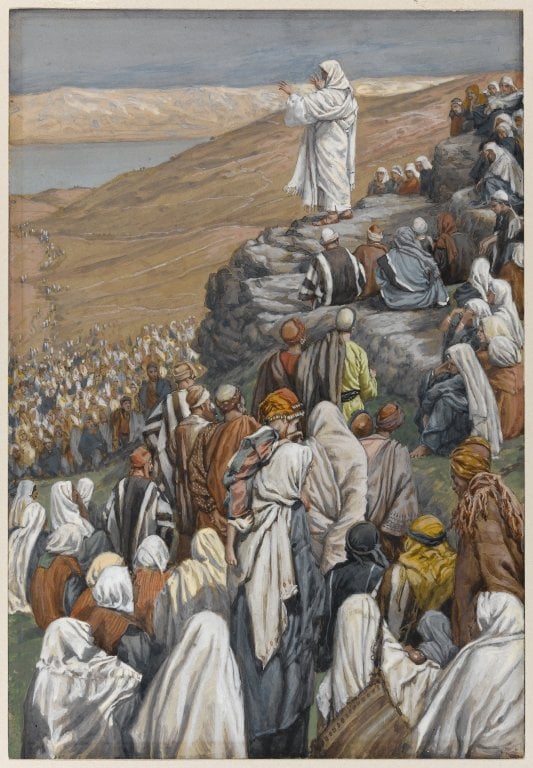 The title “Sermon on the Mount” was apparently first given to Matthew 5-7 by Augustine of Hippo, but the specialness of this discourse was realized from the beginning and largely accounts for the popularity of this gospel in the early church.  It is the first of five such discourses into which Matthew gathers the teachings of Jesus topically, the others being: Counsels on Mission (chapter 10), Teaching in Parables about the Kingdom of God (chapter 13), Church Relationships (chapter 18), and Last Things (chapters 23-25). Each discourse is marked at the end by words such as “When Jesus had finished these sayings …”

Matthew organizes the teachings of Jesus topically, not chronologically.  Luke 6 has a shorter sermon, often called the Sermon on the Plain (because of Luke 6:17, but the “level place” can mean a level place on the side of the mountain).  Both accounts are really versions of the same sermon, but whereas Luke scatters many of these sayings of Jesus throughout his narrative, Matthew brings all of them together.  That is to say, almost everything in Matthew 5-7 can be found in Luke, but not all in Luke 6.

It is helpful to see the setting and function of the Sermon on the Mount in the early church.  Christian teaching was of two kinds, called kerygma (proclamation) and didachē(instruction).  The Kerygma was the evangelistic preaching, intended to turn unbelievers into believers in Christ and bring them to repentance and baptism.  The Didachē (pronounced “dee-dah-khay”) was the teaching about how to live the Christian life, imparted to them after they made that choice.  The Kerygma was the announcement of what God has done for us in Christ; the Didachēwas the impartation of what the Lord expects of us in response.

Thus throughout the book of Acts we find summaries of the Apostles’ preaching, the fullest being Acts 2:14-40, another being Acts 10:34-43.  When all these summaries are compared we see a fairly consistent pattern of content: they basically all tell the story of Jesus—His life, sacrificial death, resurrection, exaltation, and expected second coming.  After their baptism the people were taught (Acts 2:42).  But what were they taught?  The Great Commission included “teaching them to observe all that I have commanded you” (Mat 28:20).  The Apostles were merely the conduits for transmitting the imperatives of Jesus.

The Sermon on the Mount was the epitome of the imperative teaching of Jesus.  Indeed much of the New Testament can be regarded as a commentary on the Sermon on the Mount, especially the letter of James.  It is Didachē, not Kerygma.  It is not about what Jesus has done for us, but about what He requires of us.  The righteousness that is demanded is real righteousness of attitude and performance.  The closest hint in the Sermon to the idea of grace is the fourth beatitude (Mat 5:6), “Blessed are those who hunger and thirst for righteousness, for they shall be satisfied.”  One does not hunger for something that he can supply himself.  It comes from outside us, but we have to have an appetite for it. The merciful graciousness of the Father is cited in 5:45 only to hold it up in verse 48 as an example to be imitated.

Important things happened on mountains.  In the Old Testament there were Sinai, Horeb, Carmel, Zion.  On a mountain Jesus prayed (Mark 6:46), called the Twelve (Mark 3:13), was transfigured (Mark 9:2), appeared to his disciples after the resurrection (Mat 28:16), and more.  But this mountain was like a new Sinai.

The key to the Sermon and its structure may be Mat 5:20: “For I tell you, unless your righteousness exceeds that of the scribes and Pharisees, you will never enter the kingdom of Heaven” (as suggested by Joachim Jeremias).  The righteousness required of citizens in the Kingdom of God is a higher righteousness that required by the Judaism of that time, and the Sermon defines that righteousness.

This keynote suggests how the Sermon is organized.  Most of chapter 5 criticizes the righteousness of the scribes, the lawyer-theologians.  Chapter 6 critiques the piety of the Pharisees, religious laymen.  Chapter 7 is about “your righteousness” and what it involves.  The climax is in 7:12, the Golden Rule.

Jesus employed colorful metaphors.  If salt becomes unsalty it becomes worthless (5:13).  Perhaps Jesus is thinking of salt that was adulterated by being mixed with white powder.  Of course, strictly speaking, either salt is salt or it is not.  This saying shows that Christians and even a whole Christian community can cease to be truly Christian.

Most of chapter 5 is about Jesus’ attitude toward the Law (5:17-48), pointing to a righteousness that is greater than that of the scribes.  There is a big paradox here.  On the one hand Jesus declares in 5:17 that He did not come to abolish the law and the prophets (meaning the Old Testament), but to fulfill them.  On the other hand, the rest of the chapter (5:21-48) contains a series of antitheses which seem to put Jesus’ teaching in opposition to the Mosaic tradition: “You have heard that it was said to the men of old … but I say unto you …”  Maybe the solution to this paradox is to say that Jesus wanted to restore and even intensify the demands of the law, but He did away with misapplications and abrogated some traditions that had been built on the law.  He was at odds with the scribal understanding of the law.

Jesus intensifies the sixth and seventh commandments.  One commits murder or adultery in his heart and in God’s sight simply by wishing to but lacks the opportunity.  Jesus refers to Lev. 19:12, Num. 30:2, Deut. 23:21, which do not command to take an oath, but rather insist that if an oath is made it must be kept; Jesus simply says: Don’t make oaths.  There is nothing in the Old Law which said “You shall love your neighbor and hate your enemy,” but that is what the Essenes were taught.

So how must our righteousness exceed that of the scribes?  They strove after merit, manipulated the rules with a concern to build a public reputation.  The new righteousness is a new relationship with God and with people, doing the will of God.

Mat 6:1-18 is about sincere worship.  The only part found in Luke is the Lord’s Prayer, which is paralleled in Luke 11:1-4.  Jesus deals with almsgiving, prayer, and fasting, and He raises the question:  Would your religious life be any different if nobody is watching?

“Do not lay up for yourselves treasures on earth” (6:19).  An effective commentary on this passage is the parable of the Foolish Rich Man in Luke 12:15-21.  It is an antidote to the gospel of the TV commercials and the acquisitiveness of modern life.  But Jesus’ intention was to liberate us from our cluttered lives, not to impose austerity (cf. Mat. 11:16-19).  Admit it:  We are in bondage to our possessions, which tend to exceed the room we have for them and the time we have to protect them and keep them in repair.

Chapter 7 contains a series of admonitions applicable to Christian believers, especially earnest ones:  Don’t be censorious, respect the holy, pray in faith, don’t be lax, beware of false prophets.  The ultimate epistemological criterion and religious test is: “You will know them by their fruits” (7:20).

The sermon ends with the parable of the Two Builders (7:24-27), which is paralleled in the Rabbinic literature: