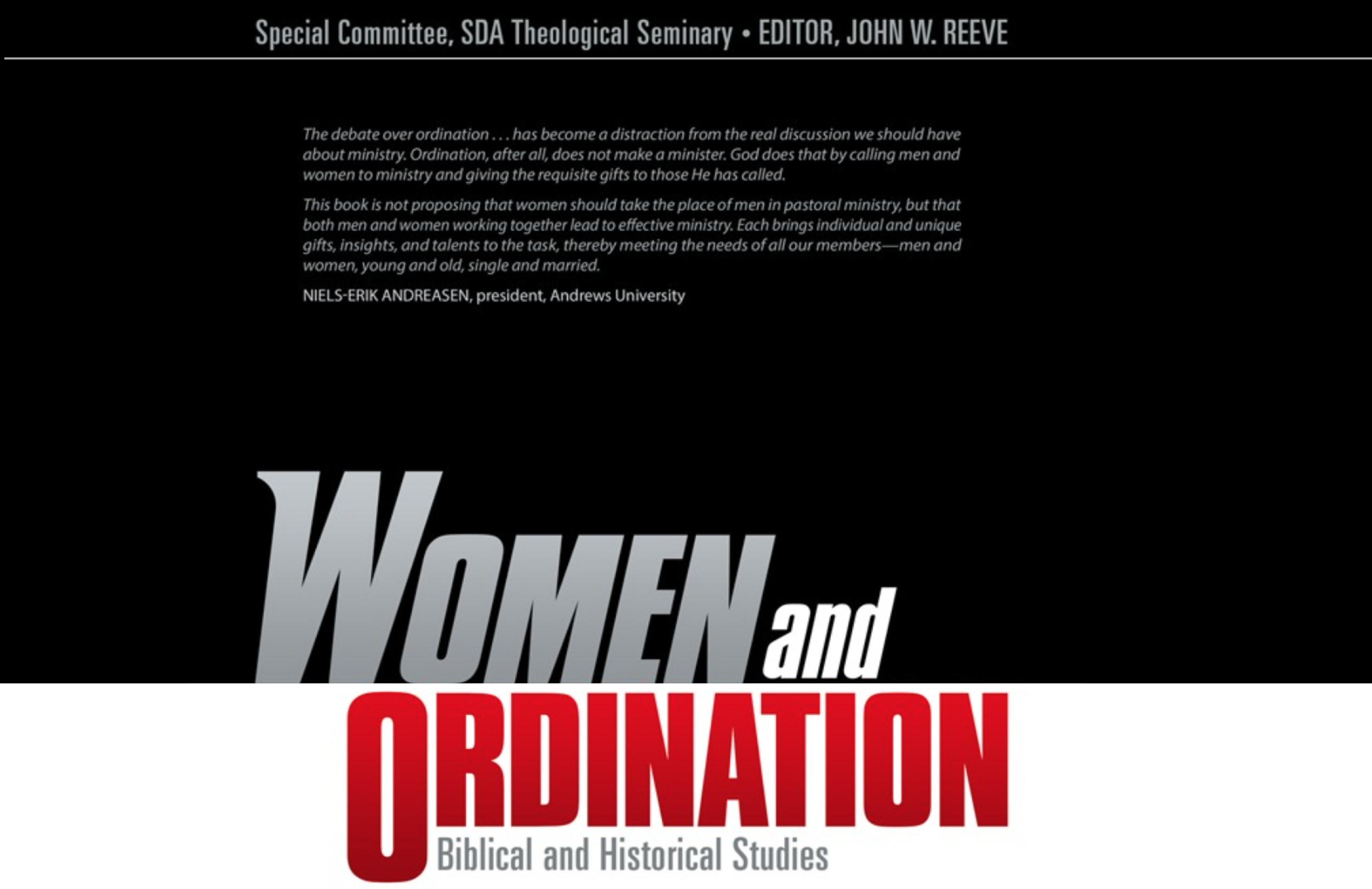 John Reeve, professor at the seminary at Andrews University, talks about a new book he has edited, representing 50 years of the conversation about ordaining women in Adventism.

Question: You are the editor of a new book called Women and Ordination: Biblical and Historical Studies, which has been put together at Andrews University and is being published by Pacific Press. Why do we need another book about women's ordination?

Answer: We need another book about women's ordination because the conversation within Adventism, which has been changing rapidly over the last five years, has reached a temporary stasis point. This book stands as state of the question (status quaestionis) on the pro-ordination side. It represents 50 years of the conversation that has helped shape the studies that make up the chapters. Many of these studies have been published in journals or web-published by the Theology of Ordination Study Committee, but this book pulls them together in one place. (11 of the 19 chapters are adaptations of TOSC papers.) Whatever happens at the General Conference session this summer, a new conversation will begin. This book is poised to be the starting point of that conversation.

I have talked to hundreds of Adventists who are very interested in the topic, but have not navigated the web to find the TOSC papers. This book provides them a convenient package of some of the best studies that have shaped the ongoing conversation.

The statement put out by the Andrews University Theological Seminary last year called "On the Unique Headship of Christ in the Church" was clearly in favor of ordaining women to the gospel ministry. Is this the view that all of the authors represented in the book subscribe to, or does the book contain alternate views?

This is a pro-women's ordination book. The authors of this book are in favor of allowing women to be ordained in the Seventh-day Adventist Church wherever doing so would enhance the mission of the church.

How did you choose which essays to include?

Studies were chosen for inclusion based on scholarly merit and to show the breadth of the biblical and historical merit for the pro-women's ordination arguments.

The book is being published just a few weeks before the General Conference Session in San Antonio, where women's ordination is due to be discussed and voted on by the world church. I assume the timing was intentional. Do you hope that the book will influence and inform delegates?

I have been wanting to get a book out for some time. In fact, Karen Abrahamson and myself wanted to publish a revised edition of the 1998 book edited by Nancy Vhymeister, Women in Ministry, over three years ago. However, the conversation was changing so rapidly that there was no opportunity to get that book out.

I also wanted to publish a book from the presentations made at the 2012 annual meetings of the Adventist Society of Religious Scholars, but there were not enough chapters to make a complete picture. Many of those papers have been published in Andrews University Seminary Studies and in other journals.

This book, however, could not be published until the conversation had reached a stasis point, which really makes it too late to heavily influence delegates except in one way. It may influence the delegates to know that the faculty at the SDA Theological Seminary are overwhelmingly in favor of allowing the ordination of women.

How will the book be marketed and distributed? How many copies are being printed?

Pacific Press is the publisher and is responsible for marketing. I think that the initial print run is 3500 copies, but that is up to the press. I do know that I am sending copies to every Adventist college and university library so that they will be available to students and faculty around the world as a starting point for the next conversation that will inevitably take place.

I asked AU Press to consider publishing the book, but they were not in a position to handle the work load at that time. I am pleased to be published by Pacific Press; they have been responsive to the needs of the book, but I am sure that I would have also been pleased with AU Press had they been in a position to take on the project.

How did this book come about? Was it your idea? Give us a sense of how it came to be, and how you got involved as editor.

I gave minor help in research and editing with a couple of chapters in Women in Ministry while working as a graduate assistant in the seminary back in 1997. I was very happy to be useful toward something that I am convicted is needed. So when — after TOSC was over —I found many people who had not read the papers even though they were publicly available on the web, I wanted to make sure all this excellent scholarship was not lost. I wanted to honor the scholars who I have learned to appreciate and trust, and I wanted to be useful in making this scholarship available for the long-term.

What do you believe the outcome of the discussion of women's ordination at the General Conference session will be?

It seems to me that the way to unity in the Seventh-day Adventist Church going forward is to have policies that allow each area to build the ministry team that would be most effective in its own setting. I believe each locale must allow the Holy Spirit to give the gifts needed for ministry to those whom God chooses to use.

I am optimistic that many other Adventists from around the world can see that the biblical concept of ordination is based on function, and wherever it is functionally feasible, women can be ordained.

What do you feel is the primary obstacle to ordaining women in the Adventist church?

In the last part of the 20th century, I think it shifted to a concern for the brothers and sisters within Adventism who had followed the societal rejection of women in leadership and continued to hold onto that as a religious tradition.

Now the concern is not offending our own members.

What is your personal background and experience with the ordination of women in ministry?

My mother was a nurse who decided to take a theology major in her 50s as a way of enhancing her ministry to her patients. She would have made a great pastor.

Unfortunately, she joined the church in the 1930s when there was a stark cutback on women in leadership in the church. This left her without models of what a woman could do in the church, so she became a nurse.

Women and Ordination: Biblical and Historical Studies is available at your local Adventist Book Center, or from www.adventistbookcenter.com for $19.99.

John W. Reeve, PhD, is assistant professor of church history at the Seventh-day Adventist Theological Seminary at Andrews University. He teaches early church, middle ages, and reformation history. John is also editor of Andrews University Seminary Studies and co-author of the book The Trinity. John’s wife, Teresa L. Reeve, PhD, is associate professor of New Testament as well as associate dean of the Seventh-day Adventist Theological Seminary in Berrien Springs, Michigan, where they live with their daughter Madeleine.