The Russia-Ukraine War and the End-Times Scenario 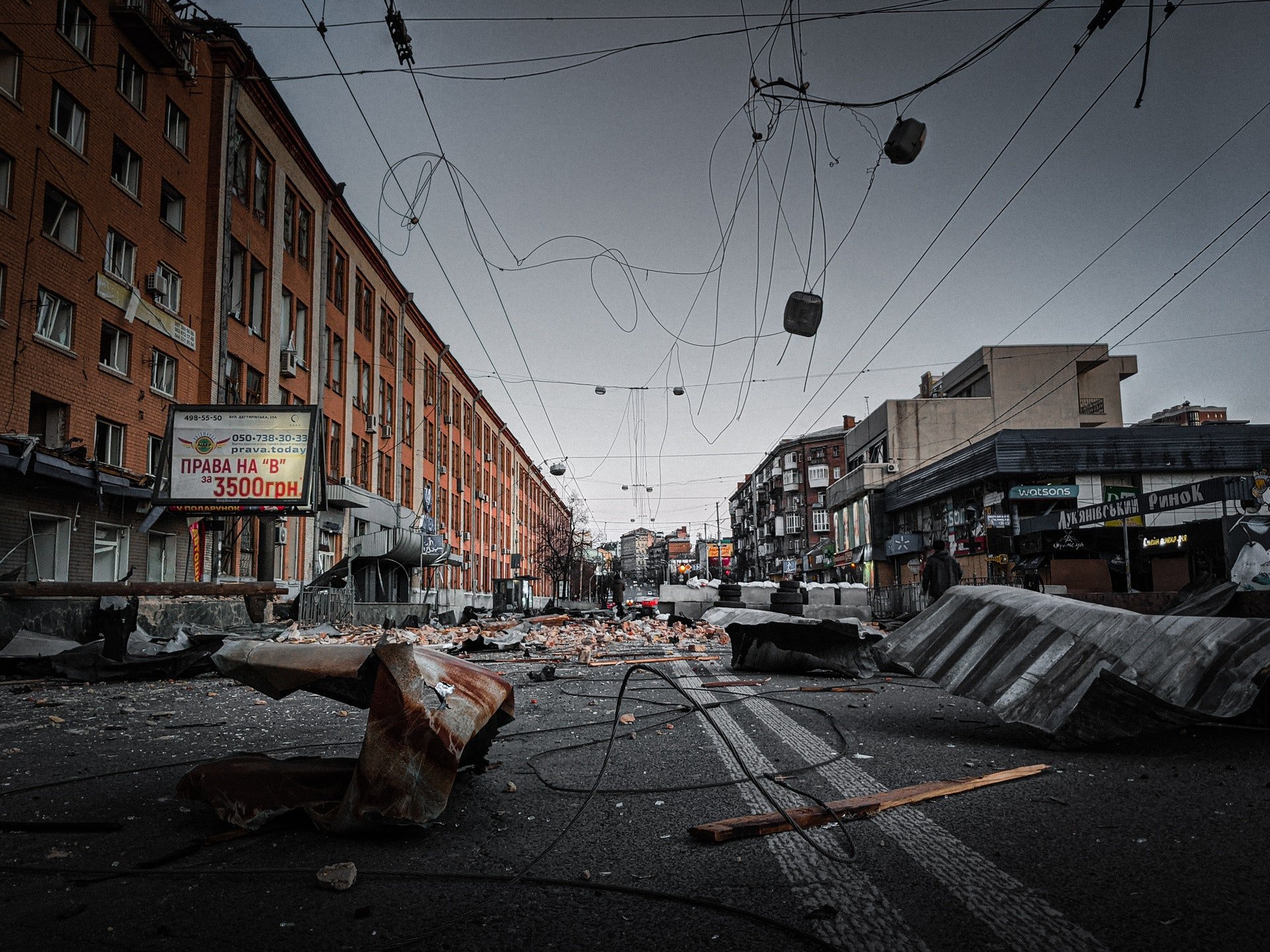 On Wednesday night, February 23, I was speaking at the Sacramento Slavic Church. As I stood at the pulpit at 7 pm my phone buzzed, and I silenced it. When I checked afterward, it was a Viber call from my sister in Ukraine. I immediately called her, knowing the politically tense situation at the time. I heard her crying, “Russians are bombing our city!” Kyiv was 10 hours ahead and there it was already Thursday morning, February 24. I instantly checked Google and there was nothing about bombing in Ukraine. My response to my sister was, “What fake news are you watching?” But the tears in her voice were real as she was seeing with her own eyes the buildings in Kyiv on fire. The media was silent, speechless for almost two hours. There was nothing on any news networks until two hours after the bombing began. She told me to install the Telegram app on my phone and stay in touch with the real world. The world was caught by surprise. Suddenly destruction was upon the world!

During the first week of the war, I was comparing the situation to what took place in Rwanda in 1994, when for 100 days politicians were talking but nothing was done to stop the genocide. As I heard Putin’s “denazification” speech, I wanted to shout, “That’s a newly minted word for genocide!” as a goal set by Putin is to destroy the Ukrainian nation. The Russian narrative for the past 20 years has been denying the existence of Ukraine as a nation. The “Russian” label was applied to all ethnic groups from the former Soviet Empire. I have been living in Canada for 30 years, and I was always referred to as "the Russian"—totally disregarding that I am Ukrainian—even in the formal and official church settings, no matter how many times I explained and reminded people of the difference. Although Russia had been a colonial power in that part of the world, the different ethnic people groups there still have their identities, unique national character, and qualities.

As the war escalated, I wondered why the Western powers—the United States and the NATO coalition—were not stepping in and putting an end to the terror? Why is everyone standing by watching young and meek Ukraine being torn apart by the second-largest army in the world?  When will the “free world” make up their minds and do something?  My questions were unanswered until I heard some of my evangelical pastor friends talk about their perspective on the outcome of the war and listened to their comments. I knew that their eschatology was very different from our Adventist understanding of end times. But I did not imagine the new twist they see in this war of Russia against Ukraine. Pondering how widely accepted the theory was, I watched a few YouTube videos, like one by Jimmy Evans, “What In The World Is Going On?” a sermon he preached at the Fellowship Church, Grapevine campus, in a series with Ed Young.

I now understood why leaders of the “free world,” influenced by evangelical pastors as spiritual advisers, are hesitant to engage Russia and protect Ukraine in what they see as the Ezekiel 38 war with the Gog/Magog army starting their march toward Jerusalem for the final conflict. Before some accuse me of conspiracy, just recall how evangelical Christian leaders were frequent in Trump’s office laying hands and praying with and for him, and consider the influence of large evangelical churches in the US, and even secular European countries. Biden is receiving even greater support from faith community leaders. Ezekiel 38 prophecy is in the center of the dispensationalist version of end times. From Joel Rosenberg’s “The Ezekiel Option” fiction to Tim LaHaye and Jerry Jenkins’ Left Behind series, ideas associating Rosh of Meshech and Tubal from Ezekiel 38:1-2 with Russia, Moscow, and Tobolsk are out there. Together with Iran, Turkey, Lybia, Egypt, and Ethiopia (Ezekiel 38:5-6), they project the invasion of Israel. Israel’s formation in 1948, being established after the Holocaust, is seen as the fulfillment of the “dry bones” of Ezekiel 37 coming to life. Into the mix is thrown the “generation” prophecy, Mathew 24:34, and a timestamp of 80 years (Psalm 90:10) is added to set 2028 as the year when the millennium will be ushered after seven years of tribulation. And their theory goes on and on and on, including the third temple rebuilding for the Antichrist to sit in. Meanwhile, the fiction of the secret rapture is expected to happen right before all of this. Nowadays, dispensationalist evangelical confusion sees Putin as Gog, Russia as Rosh, and all the “stan” countries of Middle Asia as Magog, and believers would rather be raptured right before nuclear warheads are deployed than engage in resolving this conflict.

Some hope that non-engagement will spare European countries from invasion, as Gog/Putin just takes over Ukraine and proceeds through Turkey to Israel, as some “prophets” predicted that if European countries engage, they will be invaded and conquered by Gog/Putin hordes.

Ukraine is significant, too, in their understanding because Ukraine is the home of the Hasidic Jewish annual pilgrimage, as Reb Nachman of Uman is buried there. Uman was one of the first cities to be bombed on the first day of this war. Golda Meir, the fourth prime minister of Israel who was influential in shaping Israel as a state from 1969 to 1974, was born in Kyiv. David Ben Gurion, national founder of the State of Israel, was born in Plonsk, Poland, when it was at the time occupied by the Russian Empire. The current President of Ukraine, Volodymyr Zelensky, is also a Jew. Consequently, an invasion of Ukraine is seen as the first step in the grand march of Gog/Magog toward Jerusalem. Imagine how nervous world leaders are who hear such interpretations from their evangelical advisors.

This is where Seventh-day Adventists should not be silent. We should be loud! We should shout and not hold back that such theories are nonsense! This is how a misunderstanding of prophecies impacts sound decision making. Revelation 12–20 presents a totally different scenario of how things will unfold in the time of the end.

Russia is not Rosh. Rosh is a Hebrew word for “head, beginning, top, ridge.” The word is frequently used in the Hebrew Bible, 599 times, and does not in any way imply Russia. Nine times out of ten, the name Gog is mentioned in Ezekiel 38–39, making it highly symbolic in context. King David was referring to Meshech in his time (Psalm 120:5-6) as a place of war, two millennia before Moscow was first mentioned in AD 1147. And Tubal is frequently mentioned, together with Javan (Greece), as a real geographic place, far from the Siberian Tumen region where Tobolsk is located.

Gog and Magog are not a literal location, nor an allusion to some person or a nation, but a figurative phrase. We must consider gematria, an alphanumerical cipher, a science of assigning a numerical value to a letter in the alphabet. It adds גוג ומגוג (Gog and Magog) to numerical value 70[1]. The expression “Gog and Magog” is an idiomatic phrase with a figurative meaning of “all heathen nations,” all gentiles, all pagans, goim, all those outside of God’s election and will. The world outside of Israel was Gog and Magog. For example, the Sibylline oracles (3.319), composed by Alexandrian Jews in the second century BC in Egypt, interpreted Gog & Magog as Ethiopians and Nubians who accompanied Antiochus IV when he captured Jerusalem.

I find it interesting that the same evangelical preachers include the Zechariah 14 prophecy of “all nations” coming against Jerusalem, because of the verse 4 imagery of the Mount of Olives splitting and moving north and south, creating a valley from east to west in this Gog/Magog war, even though such terms are not used by Zechariah but rather “all nations” are mentioned.

The book of Revelation alludes to this Ezekiel prophecy in chapter 20, verse 8, when after the millennium, Satan calls Gog and Magog and all wicked resurrected nations to the final battle against the beloved city, heavenly Jerusalem. We must look again at the context of Ezekiel and how it is parallel to Revelation.

Ezekiel 38 is not a prophecy about Russia and Ukraine. The “free world” needs to snap out of the deceptive captivity of false interpretation and live free from superstitious bias. Just like the people of Russia need to snap out of the lies they have been fed for the past two decades and wake up to the reality of the world around them, so must evangelicals and those who listen to them also wake up from false teachings they have been fed by dispensationalist fiction.

After all, someone should at least read the end of Ezekiel’s prophecy, where in chapter 39 the destruction of Gog and his hordes is recorded (verse 11) along with burials in the valley of Hamongog and the city called Hamonah (verses 15–16), with the people of God burning weapons for seven years (verse 9) and burying enemies for seven months (verse 12). Ezekiel 38:19–23 makes it very clear that Gog and Magog will not win.

The book of Revelation presents a different narrative of what the final war will be and its outcome. The world will be under one influence, and that is not Russia. The King of the North of Daniel 11, whose final evolution is described in Revelation 13, is not Russia. The image of the Beast has not been set up yet. The Armageddon is not Har Megiddo, as there is no mountain in Megiddo nor has there ever been. To understand what the Hebrew meaning of Armageddon is (Revelation 16:16), one must consider the “Hebrew tongue” allusion to Isaiah 14:13, the mount of the assembly/congregation and its role in the final worship war. It is time we invite the world to consider Revelation 17–18 as a significant hint to understand the end time events scenario.

Even if Western Europe and the United States continue their cautious speculations on the outcome of the Russia–Ukraine war, God will himself change the course of this war because his scenario—of a monopolar world with peace and safety preceding the final end and a worship allegiance of those who follow Christ being tested in the end times—will prevail.

Alex Golovenko is a pastor serving in Windsor, Ontario, Canada. Originally from Ukraine, he moved to Canada in 1992 and worked in different fields in British Columbia, Alberta, and Saskatchewan until starting full-time pastoral ministry in the Niagara Region in 1999. Married to Sandra Lopez-Gomez from Nicaragua, the family holds special appreciation for cultural diversity. His personal credo is making sense in discovering God’s Agenda.