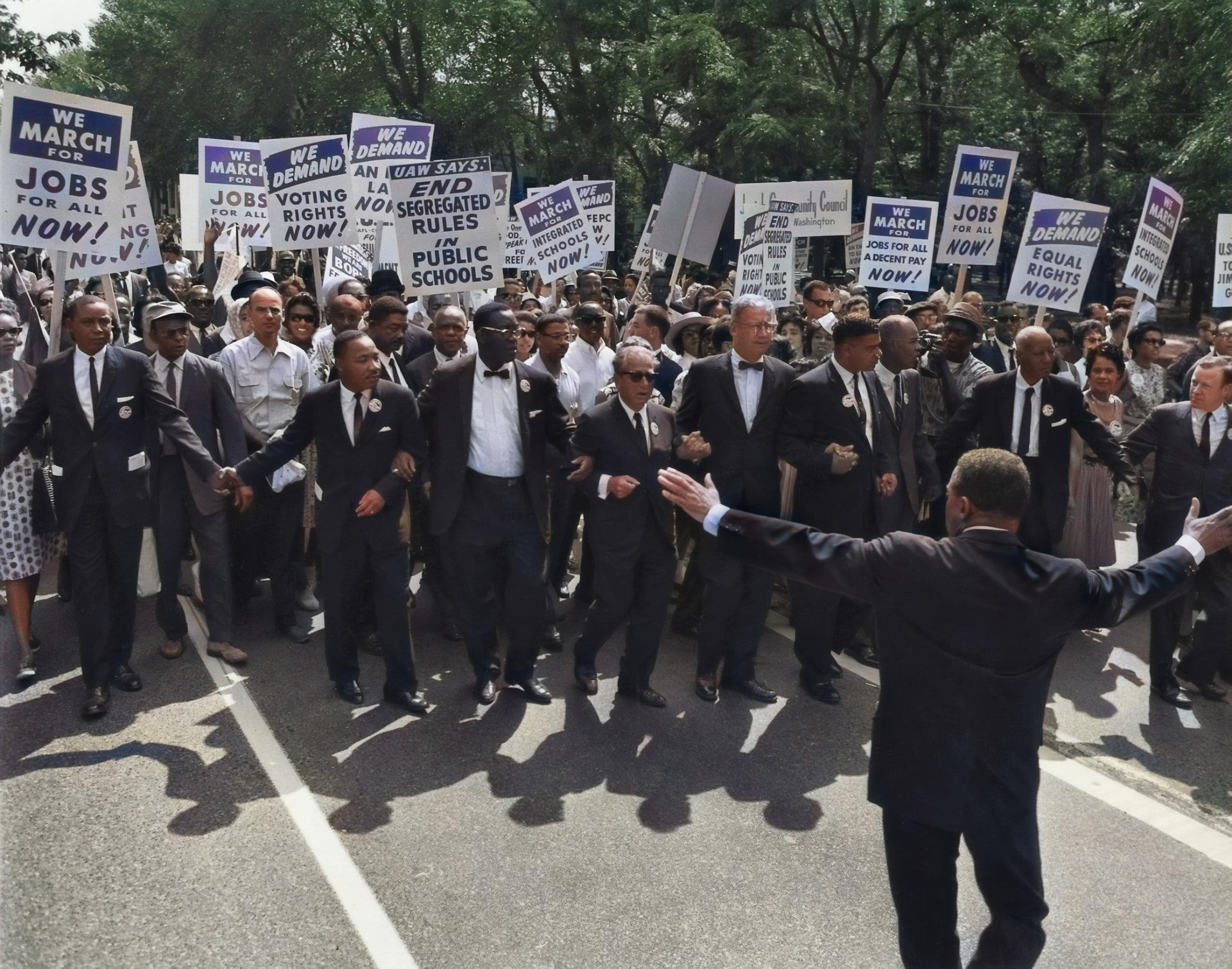 To better grasp the prophetic implications of Dr. Martin Luther King, Jr.’s charge that America was “born in genocide,” it’s helpful to first take a glimpse at another of his overlooked oracles, “The Other America”:

“…there are literally two Americas. One America is… the habitat of millions of people who have food and material necessities for their bodies; and culture and education for their minds; and freedom and human dignity for their spirits. In this America, millions of people experience every day the opportunity of having life, liberty, and the pursuit of happiness in all of their dimensions…

Dr. King wasn’t just concerned about racial injustice. He strove to reconcile the disparities between the have nots and the have lots — whether they were “Mexican Americans,” “Indians,” or “Appalachian Whites.” When his life was cut short, he was organizing a massive, interracial Poor People’s March on Washington (which his wife completed after his assassination). King wasn’t trying to overthrow or undermine the government. In fact, it was King’s patriotism that prompted him to declare, “All we say to America is to be true to what you said on paper.”[ii]

Being false to its founding documents alarmed early Adventists as they compared history and current events with biblical prophecy. Beginning in the 1850s, Sabbatarian Adventists recognized there were two Americas. The main difference between their observation’s and King’s is that King maintained hope for America to become the nation it professed to be, while early Adventists saw it as doomed to become what prophecy declared it to be. Consider the following samples, beginning with John N. Andrews:

“And he had two horns like a lamb and he spoke as a dragon, Rev 13:11. This animal has a dragon heart. His disposition, his motives, his intentions and desires are all like a dragon, his outward appearances, his horns… are lamb-like.

“This is a two-faced hypocritical beast that first appears with mildness and equity but has the fierce prompting of a dragon heart. The institution of slavery most clearly reveals the dragon spirit of this hypocritical nation.”[iii]

“Says the Declaration of Independence, ‘We hold these truths to be self-evident; that all men are created equal; that they are endowed by their Creator with certain unalienable rights; that among these are life, liberty and the pursuit of happiness;’ and yet the same government… will hold in abject servitude over 3,200,000 of human beings... In the institution of slavery is more especially manifested... the dragon spirit that dwells in the heart of this hypocritical nation.”[iv]

And yet another commentator, E. R. Seaman, sarcastically suggested the earth beast of Revelation 13 should amend what it wrote on paper in order to end the charade:

“If this nation would not be the most hypocritical nation on the face of the earth, it should amend this declaration thus: All white men are created free and equal etc. Has not this two-horned, lamb-like beast corrupted the commandment?”[v]

What they saw that King didn’t see…

These expositors saw that the beast of Revelation 13:11–18 represented a rising empire, according to the principle of Daniel 7:17. They saw that this power would increase as the power of Revelation’s sea beast (13:1-10) was wounded. Along with other Protestant commentators, such as John Wesley, they saw the sea beast as the “papal kingdom” (the Roman Church of the Middle Ages).[vi] Like Wesley, they saw that God’s impending judgment would render it “more tolerable for Sodom and Gomorrah” than for anyone involved in the slave economy (many early Adventists were former Methodists).[vii]

John Wesley died in 1791 and didn’t see General Berthier deliver the deadly wound to the papacy in 1798. Nor did Wesley see America’s rapid expansion to California, via the Louisiana Purchase and the Treaty of Guadalupe Hidalgo. Because of what Wesley couldn’t see, his guess was the earth beast would arise somewhere in Asia.[viii] Adventist commentators of the 1850s experienced things Wesley couldn’t imagine, but also missed clues of their own time. It doesn’t appear Dr. King viewed prophecy through a historicist lens to see what they saw regarding the nature of the beast.

What King saw that they didn’t see…

However, early Adventist expositors overlooked what King saw. As observed by Dr. Gilbert M. Valentine, slavery was J. N. Andrews’s “primary reason for seeing the linkage” mentioned above, but “He does not appear to have felt the same passion or reasoned in the same way in regard to the ethnic cleansing and genocide practiced under the Andrew Jackson administration.”[ix]

Andrews, Smith, and others were familiar with America’s founding documents, but overlooked any relationship between their prophetic interpretation and Article 1, Section 8 of the Constitution (which states Congress shall have power to “regulate commerce with foreign Nations… and with the Indian Tribes.”)[xi] The Founders knew they weren’t entering new and unoccupied territory.

Somehow Adventists overlooked the witness of William Apess (a Pequot). Like William Miller, he was a veteran of the War of 1812. In 1829, he became an itinerant Methodist preacher in the era and area of Millerism’s birth. He was not only preaching throughout New England, but publishing books and publicly advocating for fair treatment of Native Americans.

Adventists also overlooked the Cherokee Phoenix, America’s first bilingual newspaper, launched in 1828. Although printed in Georgia, it garnered the attention of the American Philosophical Society and was circulated as far away as England, France, and Germany. Europeans were curious about the life of the Cherokee and amazed at how poorly they were being treated by the liberty-loving Americans.

Can one overlooked oracle help another?

The two Americas, whether Kingian or Adventist, demonstrate how the idealistic side of America alternately celebrates and censors the dragonic side. It seems that early Adventists even fell into this sleight of mind and memory that’s common to humanity. As historicists, early Adventists missed prior and current national events that were just as relevant as the slavery they righteously opposed in their prophetic interpretation, political activism, and personal involvement (in the Underground Railroad).

How does King’s oracle about America being born in genocide help our Adventist interpretation? For present truth to be both present and truth, we must reexamine what others may have missed when we have better documentation and time blesses us with new perspectives. As 1 Corinthians 13 reminds us, knowledge and prophecy are in part. Wesley couldn’t piece together certain parts of the prophetic puzzle Andrews and Smith did; they built from his contributions. If King could see and sense something from the nation’s birth that early Adventists overlooked, how can we not apply that as a corrective to our prophetic lens?

With many Adventist expositors and evangelists following Andrews and Smith by erasing millions of Indigenous people from history and prophecy, it is amazing that we have any Native adherents to Adventism. They are living proof that this land was populated with their ancestors. Their history is one case study after another of the violent impact of the dragon’s voice. They know their present predicament is not the result of a lamb-like benefactor.

If we take “MLK’s Overlooked Oracles — Part 1” seriously, then we can’t preach present truth by presenting an old myth. We now know that North America was populated with far more people, nations, and language groups than our interpretative ancestors accounted for. The land was deliberately depopulated, with a great deal of it happening during the 1800s. This doesn’t change the interpreters’ conclusion — rather it drives it home all the more.

A professedly civilized Christian nation killed or corralled Indigenous people on reservations in order to build a new society by displacing the previous one. Most other apocalyptic empires sought to rule and tax the people of the lands they invaded. However, this one didn’t need the tribute or labor of the first peoples. This beastly empire exploited the earth itself and enriched its output exponentially through the stolen labor from another continent.

“wanted to put to rest the popularly held belief of America’s divine origin and destiny… It gave the impression of a gentle, harmless lamb, but beneath that lamb-like pretension was a fierce dragon heart. It was a dragon beast at its core; it did not evolve into one… [emphasis added]

“The pioneers also believed that this dragon-like quality would become more evident as we approach the end of time. In other words, its lamb-like quality would recede as its dragon-like quality predominated… In the present climate of fear and uncertainty, it is not inconceivable that in the name of security and safety many of the freedoms that we now enjoy will be suspended… That time may be upon us sooner than we imagine and will make the words of these Adventist pioneers startlingly relevant.”[xii]

As admirable as King’s Beloved Community is to strive for, the nation he declared was born in genocide has something in its DNA that makes his dream very unlikely. We must still let freedom ring, yet balance our social activism with knowing that Jesus’ return is what will bring justice rolling down like waters and righteousness like a mighty stream.

Image: MLK in the March on Washington for Jobs and Freedom, in Washington, D.C. on Wednesday, August 28, 1963. The purpose of the march was to advocate for the civil and economic rights of African Americans. Photo by History in HD on Unsplash.