The Tyranny of Precedence: Why the 1919 Bible Conference “Punted” 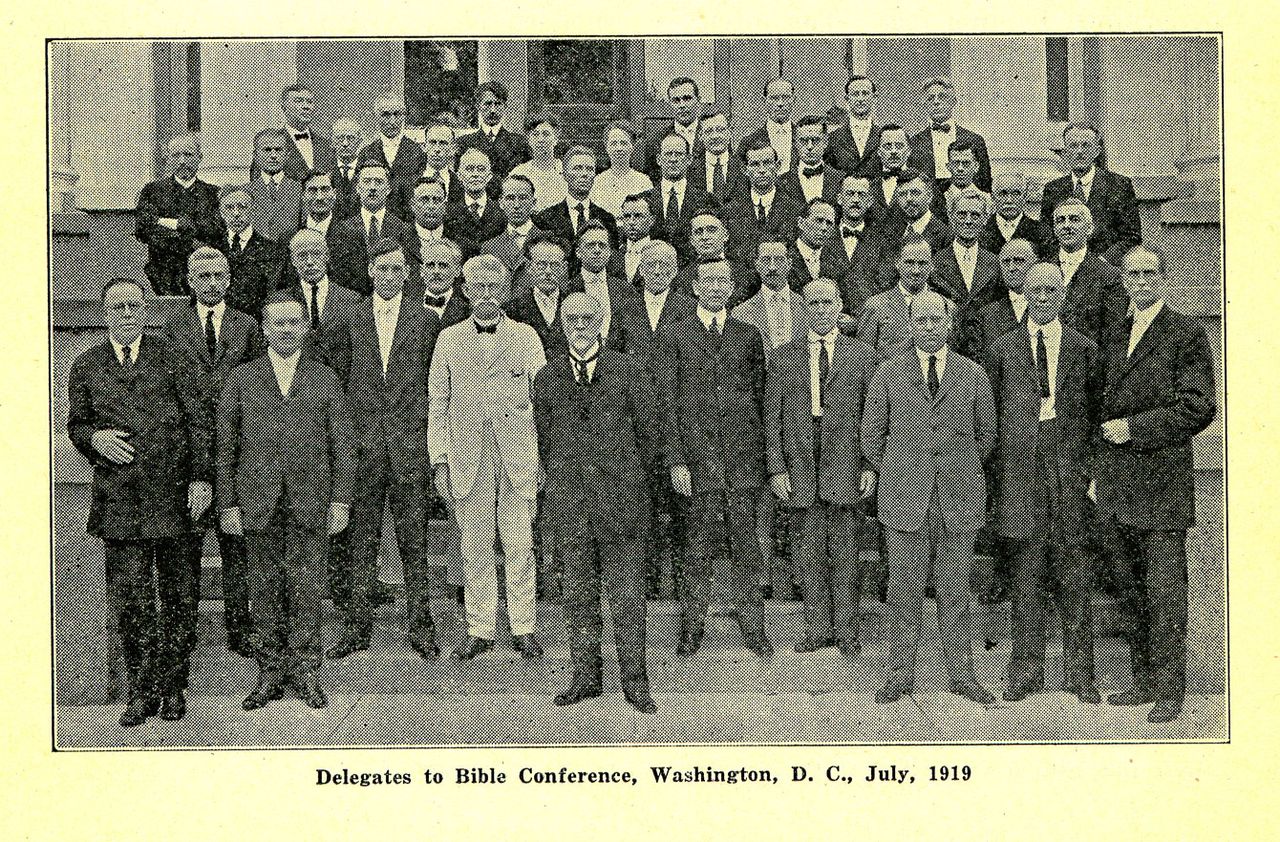 Precedence and tradition — we have always understood or done things a certain way — have caused otherwise well-educated and sincere adherents of the Bible and Ellen G. White (EGW) to ignore anomalous ethics in these writings. Progress is an enemy of orthodoxy and takes place only when we question long established but flawed positions. Whether in metaphysics or empirical science, we must continually search for what’s better. Ongoing or periodic evaluation of assumptions happens as human understanding evolves. But in religious thought, there is a perception that what an earlier generation believed is forever true and should never be reimagined. This view is flawed and contradicted by the Bible itself.

Consider the five early Bible books, the Pentateuch, as an example. Who wrote them and when were they written? There is near universal acceptance by Christians, including most Adventists, that these books — Genesis, Exodus, Leviticus, Numbers, and Deuteronomy — were written by Moses. We trace this belief to the Talmud and have dutifully transmitted it generationally to adherents of all three Abrahamic religions. Yet none of the books names an author. Like the gospels, attribution of authorship for the Pentateuch was a much later addition.

Even a casual comparative reading, particularly of Genesis and Deuteronomy, reveals too many contradictions to make a purely Mosaic authorship tenable. Deuteronomy, characterized mostly of speeches and actions of Moses at the cusp of the Promised Land, is written in the third person. We find no compelling reason for Moses to render his own speeches and actions in the third person or as past events. But this is precisely what the beginning of the narrative depicts: “East of the Jordan, in the territory of Moab, Moses began to expound this law, saying….” (1:5 NIV). Add to this the incredulity of Moses describing his own death ahead of time. Or the patently self-serving assessment by Moses while he was still alive concerning the aftermath of his death: “Since then no prophet has risen in Israel like Moses” (Deut. 34:10).

The sum total of the internal evidence for Deuteronomy is that someone other than Moses was recounting the Jewish experience with their God. And this someone is far removed from the events of his telling. This writer’s affirmation that no one alive at his writing knows where Moses was buried was his way of saying Moses had been dead a long time.

I’ll indulge a little aside.

(Our preachers and theologians know about these facts from their education and private reading. And yet they continue to pedal Mosaic authorship for these books. A lack of candor, in such “little” areas of biblical literacy by our spiritual leaders, creates mistrust about other biblical truth claims when our youth come of age and learn otherwise. It makes it easier for them to transition from believing the Bible in the same way as they come to disbelieve the existence of Santa Claus.)

But now back to Pentateuch authorship. If Moses did not write Deuteronomy, who did? As early as the 4th century CE, church father Jerome dismissed Mosaic authorship in favor of two exilic/post-exilic minor prophets — Ezra and Nehemiah. An attribution that still enjoys healthy consensus in OT scholarship. Situating the composing of Deuteronomy (and much of the Pentateuch plus a considerable number of OT writings) in the exilic/post-exilic community has profound implications. Traditionally, many Christians, especially Evangelicals, have viewed the Pentateuch as lineal/chronological accounts of Israel’s history, documented in real time. And they rely on Mosaic authorship of these scriptures for unity and authenticity.

However, if this is not the case and the accounts we now have were filtered through the unique prism of Israel’s traumatic exilic period, and through the hands of countless redactors over many centuries, then that awareness has to be brought to the forefront of readers’ consciousness when we study the text. Because the context in which a group tells its story may impact how the story is told: what is emphasized, glossed over, invented, or denied.

The question the exiled elites faced was both definitional and existential: Who are we? How “big” is our God? How did we end up in this predicament? And how do we reconstruct our story to present a hopeful future? If the texts that have come down to us were principally written from oral history or edited from extant rudimentary documents by characters immersed in the exilic/post-exilic communities, that could partly explain some content asymmetry in duplicate stories in OT narratives.

The blithe denial of obvious facts by church leaders was not limited to Bible times. A hundred years ago last year — fifty-six years after we incorporated as a denomination, and barely four years following the death of the church’s matriarch, co-founder and “prophet” — the Seventh-day Adventist (SDA) Church convened a Bible Conference in Washington, D.C. At stake was the direction of the church, in particular several difficult doctrinal issues that were percolating in church circles to which our leaders had no convincing answers or common approach. Chief among the brewing concerns was the definition and contours of the prophetic role of the recently deceased EG White.

To a lesser extent, but comparable in importance to Israel’s exilic experience, the 1919 SDA Church at the time of the Bible Conference was at a similar crossroad. They sought to understand who they were, but this time the context was the Second Coming proclamation and Remnant identity. Many of the original church founders who anticipated the physical return of Jesus in their lifetimes were dead. And now, with the passing of the church’s “Deborah” and only a scant few of her contemporaries and confidants left, there was urgency to reassess what the church stood for.

Attending the six-week gathering were close associates of EGW who were also intimately aware of her unacknowledged indebtedness to others in her voluminous writings. And some sought to narrow how the church defined her prophetic role. But there also were others — administrators, educators, pastors — who saw in her the replica of an OT prophet who not only proclaimed God’s word but also predicted the future. This latter group perceived that her writings were at par with canonical scriptures and saw no need to roll back the perception that her writings were inerrant.

In the first group were such conflicted church stalwarts as A. G. Daniels, W. W. Prescott and G. B. Thompson. These leaders were torn between their deep loyalty to the church and their personal integrity. They worried about the upheaval that might ensue if the pew members learned the true extent of EGW’s borrowing and literary help. The background to the deep concern by those who knew about her heavy dependence, especially in the historical sections of The Great Controversy, was the biblical inerrancy debate raging in other Bible communities at the time. Gradually, the notion of inerrancy was being extended to her writings, which added to the urgency by those concerned to set the record straight.

In the end, the conference would be a monumental missed opportunity. The leaders would kick the proverbial can down the road. They did not believe the rank and file membership was ready for an EGW with diminished prophetic endowment. Sixty plus years later, in the 1980s, almost as a direct result of their inaction, the church would be rocked by the twin works of Desmond Ford and Walter Rea. It was the failure to deal forthrightly with, not only her literary indebtedness, but more importantly what we mean when we call her a prophet(ess), that roared back with unrestrained fury. In 1919, the brethren leadership just punted. And in doing so they created the environment for a posture of inerrancy to flower around her writings, which has also dogged her legacy in the intervening century.

What then might we learn from our leaders’ unwillingness to tell the truth, in small and large matters, fearing it might be disruptive? The answer ultimately is no different than what we tell our children: Even if it hurts, tell the truth! No doubt speaking the truth could be disruptive in the short term, but over time truth always wins. In the Deuteronomy and 1919 Bible Conference examples, being cagey with the truth has created long ongoing problems for the Church. And regrettably our leaders’ struggle to tell the truth has created two types of members — educated leaders who know the truth, and the general membership who are deprived of, or even lied to, about the truth.

Such an attitude about the average member’s inability to handle the truth is offensively paternalistic. In this, some educators, pastors, and administrators, either deliberately or through indifference, have created a systemically under-informed membership. Deliberate because these leaders, by virtue of their education, are privy to knowledge kept from the members.

A second sad result of keeping the truth from the church is that it creates a worse backlash when the truth comes out than if it had not been withheld. And for our youth, when they stumble on the truth as they almost always do, they end up mythologizing both scripture and EGW. Unless we are ready to argue that our belief sets or way of life is flawless, we have to leave a door open for self-critique. And we don’t do that by claiming inerrancy for the leaders of our subculture. We place ourselves in this moral superiority quandary at our peril.