“What is the End Product of the Process of Stigmatizing? I Fear Where This Will Take Us”

“What is the End Product of the Process of Stigmatizing? I Fear Where This Will Take Us” 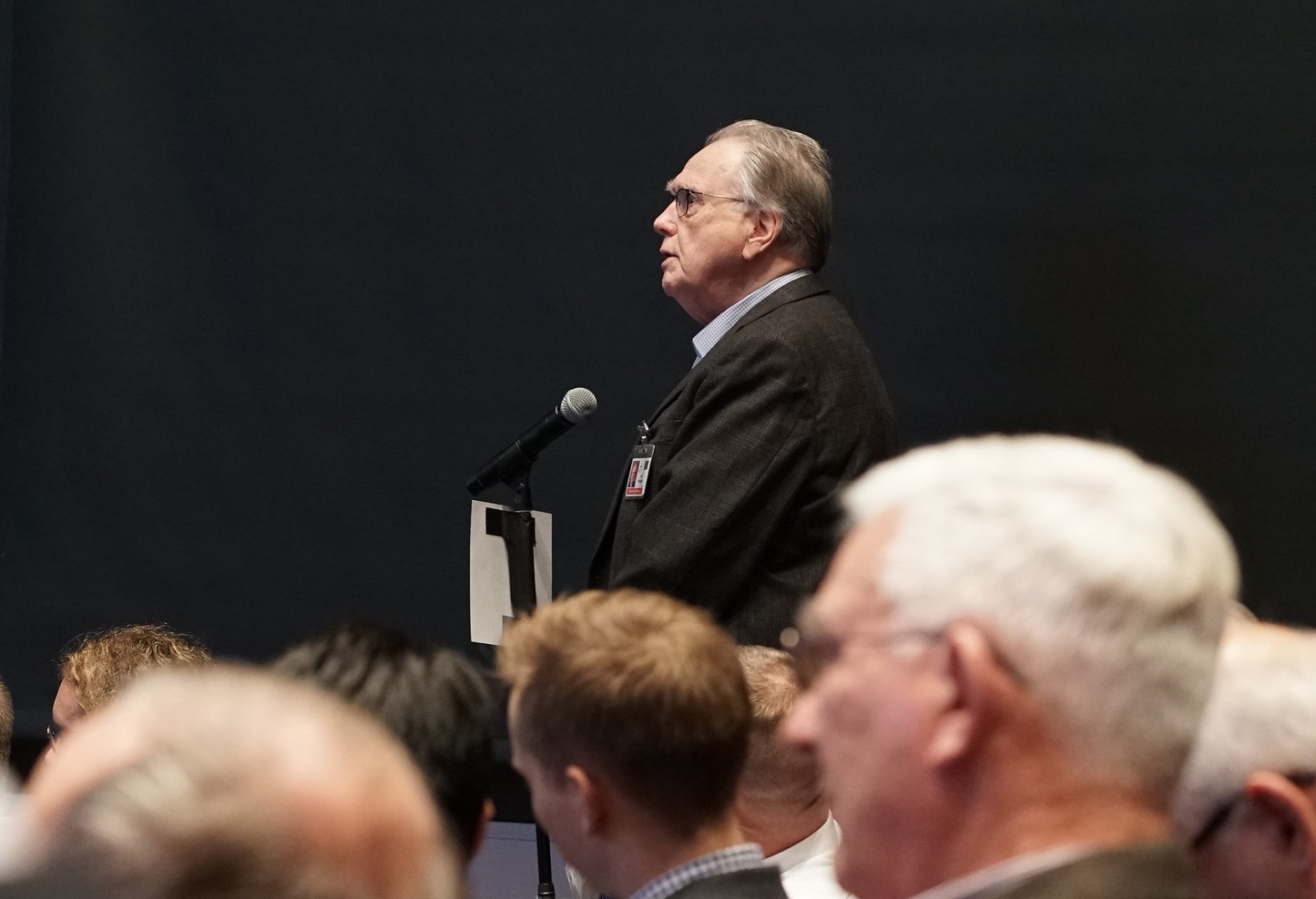 “What is the end product of the process of stigmatizing? I fear where this will take us.”

Such were the recent comments of Elder Jan Paulsen, former President of the General Conference (GC) of Seventh-day Adventists, to the Annual Council assembly as they debated the disciplinary moves on those Adventist organizations in perceived non-compliance with GC working policy on ordination. His speech ended, “I cannot see that this is the way God wants us to proceed.”1

Paulsen made these comments even as he applauded the actions of

“organizations that have acted in the best possible faith, acted in a way which reflects the harmony and will of God, as they understand it, what is best for the church in their territory where they are.”2

Great questions and comments! Yes indeed, where will this take us? I suspect that the presidents of the six unions warned this year will be reprimanded next year and cast out of the GC Executive Committee in 2021. I hope and pray that I am wrong. They may be reprimanded in 2020 and then not be cast out in 2021 because no two-thirds majority can be found in Annual Council to do this.

Victor Marley, president of the Norwegian Union Conference, asked a similar set of questions of the assembly at Annual Council as he sought briefly to represent the position of his Union Conference. They were perceived to be in non-compliance in relation to the General Conference Working Policy on Ordination. He asked, “What is the exit strategy? How do you propose that we move on?”3 And then he sought to answer his own questions:

“What we need now, are not warnings and reprimands. What we need now is creative leadership — leadership that brings consensus, not conflict. Now, I believe that consensus is possible. The Norwegian Union has repeatedly asked for and is waiting for that leadership. We are flexible and we are listening. We are ready to comply with a solution to this conundrum.”4

This heartfelt appeal to Annual Council and to GC leadership was rejected out of hand as mere opinion by GC President Elder Ted Wilson.

Christine Burt, British Union Conference laywoman and GC Executive Committee member, also spoke truth to power. She told how uncomfortable she was with the process and declared it to be less than absolutely transparent since they had “actioned one process [compliance committees to recommend disciplinary action to the GC Administrative Committee] but now use another [the GC ADCOM directly recommending such action]…. Please be more transparent with plans.” Elder Ted Wilson thanked Burt for her “instruction [to the GC ADCOM].” To me, this sounded very much like a real put down to a mere and lowly GC Executive Committee member by Elder Ted Wilson.

I guess this was to be anticipated because for five years and more, the leadership at the General Conference had repeatedly focused on compliance to the 2015 voted policy. This disallowed world Divisions from making a determination regarding women’s ordination. Over time, the dissent engendered in many Union Conferences in the Western world regarding this issue has escalated to become conflict over enforced ecclesial authority. It would seem that two mentalities are in play here. A hierarchical mindset appears to be contesting this issue with a collegial mindset.

Examples of an ecclesial hierarchical mindset abound in our world. Jesus contrasted the exercise of lordly authority, on the one hand, with his mission of service and sacrifice that his followers were to embrace, on the other (Matthew 20:25-28). One may either cling to old structures and hierarchies of power and domination and status-seeking with its clericalism and institutionalization or follow our Savior in his humble mission of service and ministry to humanity.

Not surprisingly, there are fewer examples of ecclesial bodies with a collegial mindset and the resulting collegiality of all believers. This term simply expresses a commitment to seek out the implications of what it means for all believers to engage in a new set of relationships — those Christ taught when he said “All you are brothers and sisters.” Christ alone is the Head and President of the Christian Church and of the Adventist movement within it. He presides over His people as our High Priest moving among the candlesticks (Revelation 1:20).

Creative leadership, consensus and not conflict, flexibility, listening and resolution of issues as called for by Pastor Victor Marley will likely only be facilitated if all parties have a collegial mindset. Creative leadership will have as its foundation a renewed vision of Adventist ministry and mission.

On October 24, 2019, Ty Gibson, the pastor of the Storyline SDA Church and co-founder of Light Bearers made a series of nine tweets entitled “Mark of the Beast Musings.” Here he drew a contrast between efforts in the church to control, manipulate, and coerce in the church on the one hand, with efforts to cultivate freedom, equality, and justice on the other. For Gibson, such efforts are in principle either precursors to the “Mark of the Beast” or the “Seal of God.” And he reinforces his point as follows:

This distinction between hierarchy and collegiality is readily recognized!

A Renewed Vision of Truly Charismatic Adventist Ministry and Mission

In such a renewed kingdom-building vision, Christ sends His Spirit to gift believers with heavenly abilities to continue and ultimately complete His mission and ministry to humanity. This is what happened on the Day of Pentecost and throughout the Christian era. The call of God to every believer to engage in Christ’s ministry is enfolded within these gifts which the Spirit imparts as He wills. Some believers are gifted with leadership gifts and they should use them accordingly.

The leadership paradigm within our ministry and mission to the world should never be based on a man’s right to rule, as it is within so-called headship theology. Neither should it be based on a woman’s right to equal leadership opportunity with men. Our leadership paradigm should always be determined by God’s right to gift and thereby call whoever to lead people in ministry and mission. And God, without doubt, calls both men and women to lead His people. Further, he gifts some with the gift of discernment to discern whom God has called in this way.

At the 1888 Minneapolis GC Session, senior Adventist administrators, including GC President George Butler, wanted our Bible teachers bound by a resolution that they should be restricted to teaching only already established doctrinal positions. Ellen White believed that Adventist Bible teachers should “never be bound” in this way. “Away with such restrictions” she said, which were intended to muzzle such religion teachers as A. T. Jones and E. T. Waggoner.6

“the church may pass resolution upon resolution to put down all disagreement of opinions, but we cannot force the mind and will, and thus root out disagreement. These resolutions may conceal the discord, but they cannot quench it and establish perfect agreement. Nothing can perfect unity in the church but the Spirit of Christlike forbearance.”7

At the present time, the 2018 resolution of the Annual Council concerning policy compliance has neither rooted out disagreement nor concealed discord, as Ellen White anticipated such resolutions may do in her day. Could it be that the 2015 GC Session resolution which is at the root of all this was wrong-headed?

Ellen White did not hesitate to pronounce upon another resolution from the same 1888 Minneapolis GC Session that “no one should labour as a minister unless he first made a success in the canvassing field.” In a retrospective reference to this resolution which she made in 1894 she said bluntly,

“The Spirit of the Lord did not indite that resolution. It was born of minds that were taking a narrow view of God’s vineyard and His workmen. It is not the work of any man to prescribe the work for any other man contrary to his own convictions of duty. He is to be advised and counseled, but he is to seek his directions from God, whose he is, and whom he serves.8

These are hard hitting words indeed! I believe that Ellen White would be just as plain and pointed in our present predicament! So, what of our immediate future in regard to the issues at hand? Two important proposals may provide a way forward.

Bringing Resolution to Dissent and Conflict regarding Women’s Ordination

How will Adventists end such dissent and conflict? Unity may ultimately be achieved by following two proposals. Firstly, what would happen if every Union in the four Divisions most thoroughly committed to discerning God’s call to both men and women leaders followed the trail blazed by our “errant” European Unions? What if they “appointed” Adventist leaders of both genders in their own territories? Would the GC Administrative Committee finally get the message that these moves are unstoppable? Would the GC Executive Committee and the Annual Council get the message also? Perhaps this is the best strategy to bring an end to the fruitless disciplinary measures and to invite some more creative leadership in the future.

Further, perhaps it is time to have another conference like the London Unity Conference of June 2017. As in 2017, it could be held outside those Unions most directly involved. This time involve more than just academics and administrators. Significant voices from all parts of the world field could productively be involved. Also, it may be wise to hold it before GC Session 2020. Most importantly, such a conference should seek to further develop policy consensus regarding the ABCs of appointing, blessing, and commissioning Adventist leadership. As this article asserts, a new paradigm for Adventist leadership is needed. This must be more radical than the mere extension of ordination to women.

Peter Marks is a retired Australian Adventist pastor and English professor. He holds an MA (Religion) gained at Newbold College and a Master of Information Management – Librarianship from the University of New South Wales. He ministered both in Australia and New Zealand. He was an English professor at Suncheon National University and Sahmyook University, Republic of Korea.