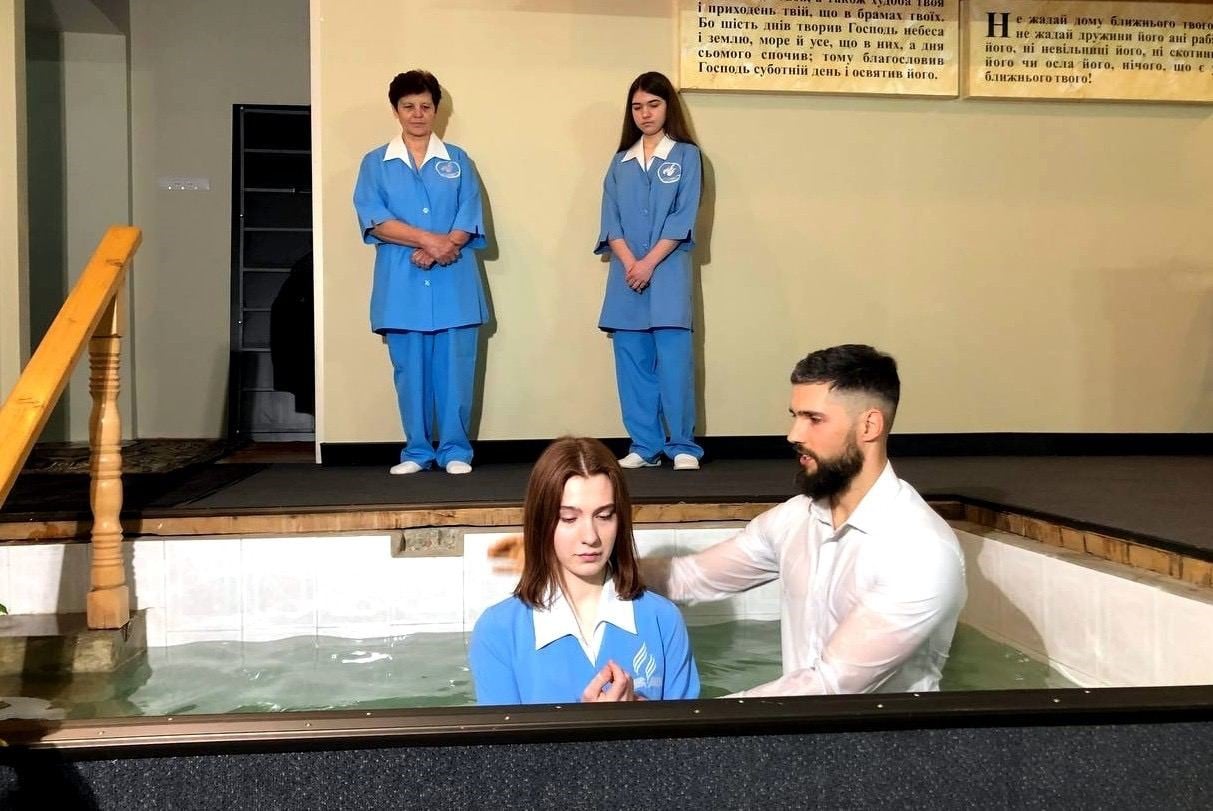 According to a report from the Ukrainian Church of Christians of the Evangelical Faith, the northeastern city of Kharkiv saw its churches baptise more than 100 people throughout the wartime period. Russian missiles have left the city nearly destroyed, but record numbers of church attendance and baptisms have provided hope in spiritual darkness. Ilya Gerasim, a senior presbyter of the Kharkiv regional association of Ukraine’s Orthodox Churches, said that most of the church congregants consist of “newly converted people.”

“Now is the most favourable time for sowing God's word and people need it,” he said.

In addition to Orthodox and Evangelical-based congregations, Seventh-Day Adventist churches have also seen high numbers of attendance and baptisms. Stanislav Nosov, who is president of the Ukrainian Union Conference (UUC) said that despite “unspeakable suffering” around the country, the church has turned into “a blessing” for many. So far, at least eight baptisms have been held and over 30 people have been baptised since the beginning of the war.

“We do not know what will happen next. Everything is in God’s hands. But we do know that His hands have blessed us and given us grounds for hope,” Nosov said in the Adventist publication, ANN.

Nosov also noted that he does not see people blaming God as the cause of the war. Rather they are desiring connection with Him in a community of believers.

—From CNE.news, “Baptisms and Church Attendance on the Rise in Ukraine”

Decatur Seventh-day Adventist Church in Arkansas opened a new 1.3-mile all-purpose trail on its property behind its sanctuary. “Pastor Neil Dye, several members of his congregation, and guests gathered at the church Sunday afternoon, October 2, to cut the ribbon,” officially opening the new trail to the public, according to the Westside Eagle Observer.

Church members have been working for a year, . . . and they invite all area walkers, joggers, and bicycle riders to come and use it. Inspiration for the trail came from a congregation member, Wes Stabel, who saw a similar trail in California when he visited Weimar College in Weimar, California.

Attractive metal signs along the trail are inscribed with Bible verses, and Dye explained that those who created the trail hope that users would not only get good exercise and enhance their physical health but will read the texts, learn about Jesus, and improve their spiritual health.

The trail was at first covered in gravel, but church members soon realized that the gravel would not remain in place long when rain fell on the hilly sections. They regrouped and gave the trail a second covering, this time with a layer of chip and seal paving. It takes a winding course up over the hill and loops back down to the church. Several benches are placed along the way where walkers can rest, meditate, pray, and enjoy the beauty of the trees and other works of creation.

On the grand opening day, “congregation members welcomed visitors near an arch at the head of the trail and served watermelon slices and glasses of lemonade to refresh those who returned from their walk.”

CNE.news reports that the Norwegian government's proposal for the 2023 state budget will decrease or eliminate funding for religious organizations. "Seventh-day Adventists will lose support for their care homes and day centers. Seventh-day Adventists at Mosserødhjemmet in Sandefjord were disturbed by the cuts.”

“If we lose support, we risk that other municipalities will skip our nursing home when seeking a house for residents because they do not get a discount,” Anita Hagler, manager of the care home in Sandefjord, said. In addition, the loss of state support may result in the closure of the day center that the nursing home set up six years ago.

Mosserødhjemmet has 56 residents and is run according to the principles of the Adventist faith. For example, vegetarian meals are served every day, and the Sabbath is celebrated weekly.

While only Lutheran schools were mentioned in this particular story, the cuts may affect Adventist schools as well. “The government wants to save money on private schools to strengthen the public school system, Vårt Land reports. For example, the government will save 10.3 million NOK (about 10 million euros) on the so-called 6a schools, of which 20 out of 28 are Bible schools. The schools will go from 75 percent of government funding to 65 percent.”

The Lutheran Fjellhaug Bible School's principal Jon Georg Fiske writes to Vårt Land that the grant cut will pose a 'significant financial challenge' and that the students are the victims because school fees will increase. He adds that the school receives a consistent number of applications every year, showing that young Norwegians desire to study at the Bible school. “It is sad that the government will deprioritize such training as the Bible schools provide.”

—From CNE.news, “These Four Religious Organisations in Norway Lose Money Because of Grant Cuts”

“I watched a video where a man riding from Santa Barbara to Camarillo got a flat tire. The church sees a lot of cyclists on the Obern Trail, and we thought it would be nice to contribute to the community in a way that could help people like the man in the video.” 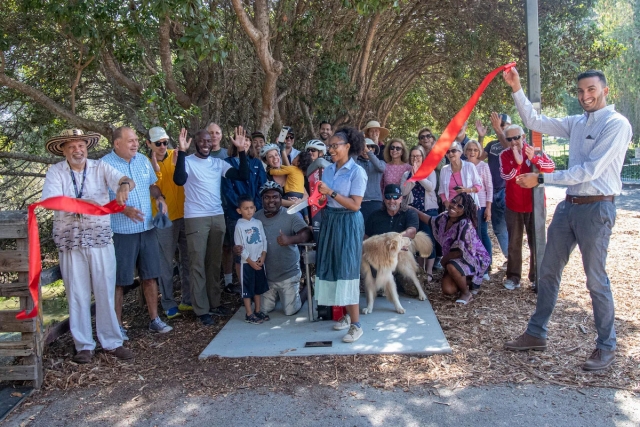 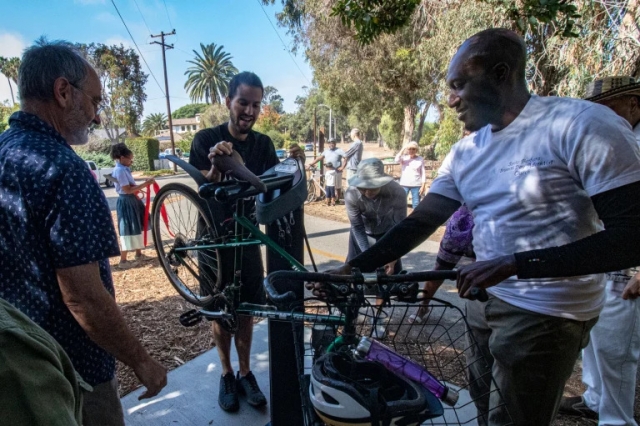 Stoute rides with a couple of bike groups in Santa Barbara and reached out to them for advice on how the church could build the station. She connected with Public Works staff in March 2021 to begin planning and coordinating with the County. After a year of fundraising, the station was installed in September 2022. “People in Santa Barbara are aware of cyclists’ needs and [wanted to] help them out. I appreciate that generosity from strangers, and the church wanted to do the same thing for the community and [to] be thoughtful of others.”

For Public Works Deputy Director Chris Sneddon, these public partnerships significantly benefit the community. “Providing the infrastructure that promotes safety, accessibility, and connectivity is one of our priorities. Safety is a shared responsibility between local government and anyone who travels on a County road or bike path. So it’s beneficial for everyone when we work with the community on projects like this.”

Title image: Baptism in a Seventh-day Adventist church in Chernivtsi, Ukraine, on March 19 in the midst of the war. Photo by the Ukrainian Union Conference / Adventist Media Exchange (CC BY 4.0).