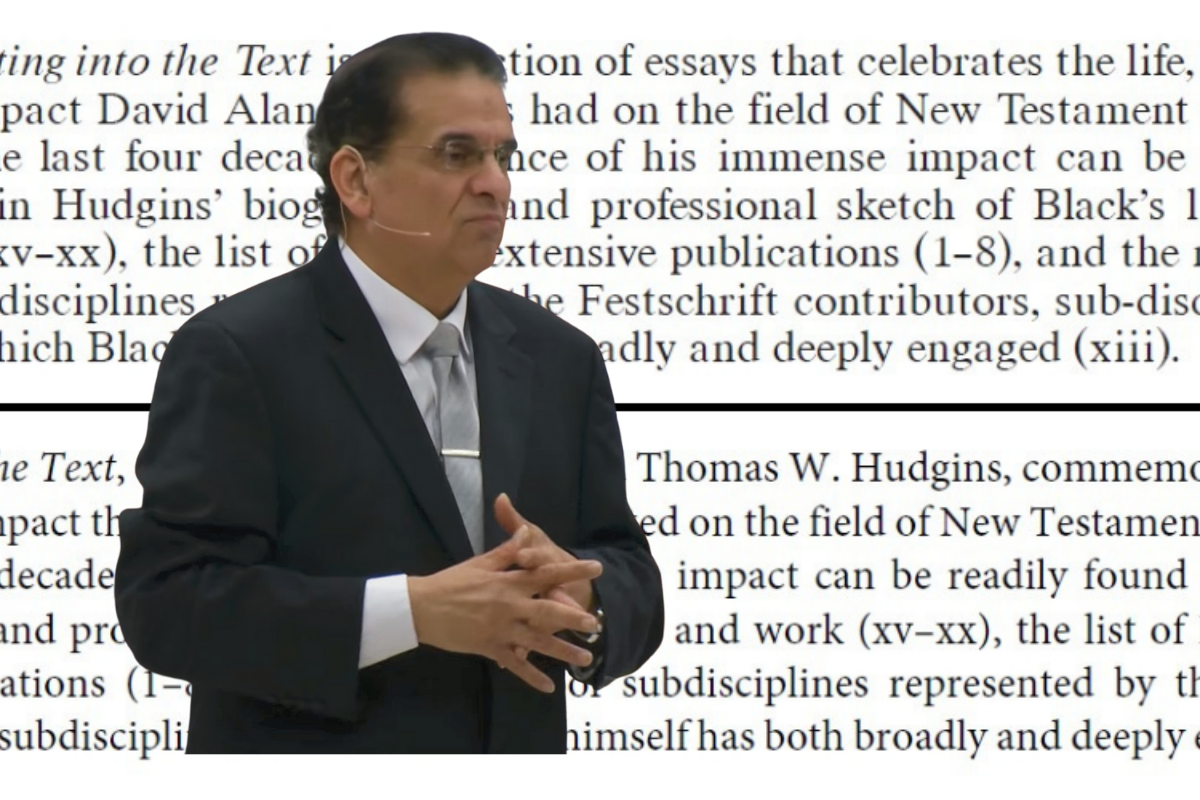 Following multiple acts of plagiarism and retractions from publishers, an Adventist scholar and retired pastor faces continued scrutiny for copying others’ work, sometimes word for word—problems dating back at least seven years.

Until earlier this month, Panayotis Coutsoumpos was relatively unknown in the academic world. He had written for Andrews University Seminary Studies, authored several books, and listed over 70 published papers on his Academia.edu profile, but none of his work appears to have garnered much attention. Then in March 2022, the Review of Biblical Literature, a publication from the Society of Biblical Literature, published a book review by Coutsoumpos and announced it in their newsletter. 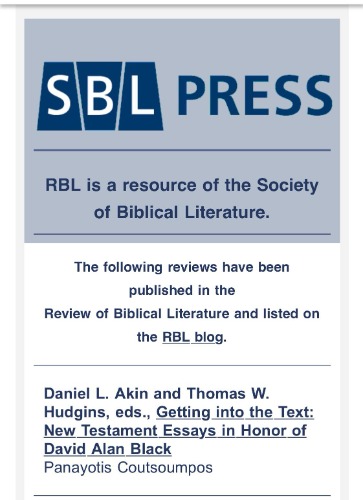 Screenshot from the initial RBL email announcing the book review.

Jacob Cerone, a graduate student and teaching assistant at Friedrich-Alexander-Universität in Germany, appears to have noticed the review bore a striking similarity to one of his own, published by a different journal in 2017 (Cerone did not respond to a request for comment for this story). Entire paragraphs were lifted from the original with only a word or two changed. Once the news was shared, other biblical scholars expressed their outrage on Twitter.

“This is not even subtle,” wrote Robyn Whitaker, a professor of New Testament at Pilgrim Theological College. “I’ve seen students try and cover up plagiarism better than this.”

Multiple scholars said they had complained to the Society of Biblical Literature about the review, and soon SBL removed it from its website and announced its retraction via email.

When reached for comment, Bob Buller, director of SBL Press, said in an email that the review had been retracted the day after it was published. “As SBL Press explained in a subsequent email to its subscribers, SBL took that action because the review ‘was determined to have been plagiarized,’ ” he said. Buller added that SBL has no comment about further instances of plagiarism by Coutsoumpos but that “if RBL discovers that any review we have published has been plagiarized, SBL will remove that review from RBL/SBL Central regardless of who submitted it.”

While the case was quickly dealt with, scholars began taking a closer look at other work from Coutsoumpos. It wouldn’t take long for them to spot more problems.

After the plagiarism and retraction by SBL, Cousoumpos deleted all of the content from his Academia.edu profile, a website that allows scholars to share their work. In its place, he posted a one-page letter, in which he claimed to have been advised to cease “all avenues of communication” because of a stroke suffered in May 2021.

“I apologize for all the wrongdoings and unethical action (because the pressure of time and also unwise and no prudent [sic] decisions) from my part and the inconveniences this may cost to the academic world,” he wrote. Yet he also went on to make veiled threats to those discussing his work: “I hope that all unnecessary comments that are out there could come to an end (this could implicate some legal actions).” After leaving the letter up for several days, Coutsoumpos deleted it as well and removed his name from the website profile. He also deleted his LinkedIn account.

According to biographical information published online, Coutsoumpos was born in Panama to a Greek father and a Panamanian mother and has lived and worked in several countries. His Academia.edu and LinkedIn profiles stated that he has an MA in religion from Andrews University and a PhD from the University of Sheffield in England. Most recently, Chesapeake Conference confirmed that he was employed as a pastor for several Seventh-day Adventist congregations from 2011–2019.

Over the years, he has also described himself as an adjunct professor of biblical and New Testament studies at Montemorelos University, the flagship institution of Adventist higher education in Mexico. Montemorelos University did not respond to multiple requests for comment about Coutsoumpos’s ties to the school and there is no record on the institution’s website about him teaching there. A 2009 publication from Montemorelos records Coutsoumpos visiting as a guest speaker for an event, describing him as a pastor from Baltimore, Maryland. In 2019, he gave a sermon at Montemorelos and described himself as a pastor of two churches.

When reached by phone for comment, Coutsoumpos said that he was aware of the plagiarism allegations but refused to answer further questions on the record.

Although Coutsoumpos has claimed he’s reached out to victims of his plagiarism, at least one scholar had not heard anything from Coutsoumpos—and didn't even know that his work had been stolen at all.

Phillip J. Long is a professor of biblical studies at Grace Christian University in Grand Rapids, Michigan. He is active in biblical scholarship circles and follows Jacob Cerone on Twitter, where he saw some of the discussion about the initial plagiarism case. But Long didn’t know a book review of his own had also been copied until he was contacted by Spectrum.

“This is the first time I’ve heard of anybody plagiarizing a book review,” Long said when reached by phone, adding that academic fraud is a rare occurrence. “Occasionally you’ll hear of a scholar that didn’t footnote thoroughly in their commentary. . . .This is just bizarre that somebody would plagiarize a book review.”

Long said that he’s been blogging for 12 years and publishes seven or eight reviews a month on his website, readingacts.com. In 2019, he reviewed the book Romans by Frank Thielman but didn’t think more of it—it was one more review among many. Unknown to him, in 2021 Coutsoumpos published a review of Romans in the Biblical Theology Bulletin, a journal from SAGE Publishing. The entirety, save for a few sentences, is copied from Long’s website.

“I guess to a certain extent I’m flattered, but not in a good way,” Long said. The only other problems with plagiarism that he’s encountered in his career have either been with student papers or clickbait websites copying pages from his site.

“A book review is not prestigious,” Long said, puzzled about the motivations to steal one. “It looks like he went out of his way to cheat, and for really little gain.”

SAGE Publishing did not respond to a request for comment by the time of publication.

Tom de Bruin, a biblical scholar and former senior lecturer at Newbold College, watched the controversy unfold, also surprised by the situation. “I was rather shocked, to say the least, when I saw the collection of plagiarized works by Coutsoumpos grow and grow on Twitter,” he said in an email. “Plagiarism by academics is quite rare, and I can only think of one other high profile case like this in recent years (Andreas Köstenberger), and that one was nowhere near as extensive.”

In addition to the reviews by Jacob Cerone and Phillip Long, a review Coutsoumpos published in the Andrews University Seminary Studies journal in 2015 is copied from a review by Andrew J.W. Smith in Towers, a publication from the Southern Seminary (Smith did not respond to a request for comment).

A 2017 article by Coutsoumpos in the journal Biblica also contains sections that appear copied from an earlier paper.

Decided to scroll through the plagiarist's articles and saw one I was like 90% sure I had read before. Sure enough, lol. On the left the original from Pendrick in NTS (1995). On the right Coutsoumpos in Biblica (2017). The absolute cheek of adding in "Two decades ago" !-- pic.twitter.com/SW0WNgd4tR

In a story from The Roys Report on March 30, Logan Williams, a scholar of early Judaism and Cristianity, suggested that Coutsoumpos’s PhD thesis from 1996 should be examined, as “no one goes and submits a plagiarized RBL review 20 years after that PhD thesis if they’ve never plagiarized before.”

Questions also remain about Coutsoumpos’s books, which have been distributed by Wipf and Stock, a publisher specializing in religious scholarship. Jim Tedrick, CEO and director of publications, said in an email that Coutsoumpos’s six books came through the publisher’s Reprint Department and not the Editorial Department, making them essentially self-published. “It is rare for us to come across a case of plagiarism, especially in books that have been previously published and in circulation for years,” Tedrick said. “I think what makes Coutsoumpos’s case more problematic is that these works were basically self-published by him under his own publishing imprint called [the] Biblical Studies Institute.” Tedrick said that Wipf and Stock had taken the books out of print immediately.

“We did hear briefly from Coutsoumpos after we notified him of the cancellation of his books,” Tedrick said, sharing that Coutsoumpos “expressed regret for his ‘unethical action.’ ”

While there are systems for maintaining integrity within academic publishing, Coutsoumpos’s case shows how problems can go unnoticed for years. In the end, much of the system is built on trust, though that might be changing. “For students, almost all universities do plagiarism checks by default,” said Tom de Bruin, “and in recent years, publishers are increasingly doing these checks as well. While this is a high profile case in New Testament [studies], I understand that it is not infrequent within academia in other fields.”

On March 22, Coutsoumpos tweeted from his personal account: “Making mistakes and errors are part of the fallen human character but forgiving them is God’s character. Thank God for His mercy and forgiveness since all of us, without exception, make mistakes.”

Forgiveness from the academic community might not come so easily.

—with additional reporting by Alexander Carpenter