As the fire engulfed the Bay Island of Guanaja off the northern coast of Honduras during the early morning hours on Saturday, Oct. 2, Seventh-day Adventist leaders and members on the island moved quickly to assist in preventing damage to its school, churches, and the community. The fire destroyed or damaged more than 200 homes and businesses. The school sustained damage to its third floor while 30 church members lost their homes and properties, church leaders said.

“From the moment we were notified at five o’clock in the morning, pastors, conference leaders, and the membership across Honduras began to pray for God’s protection over our church members on the island and the church buildings and school,” said Pastor Adan Ramos, president of the church in Honduras. 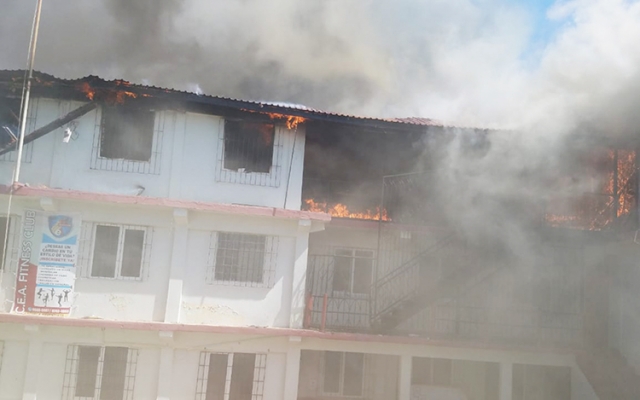 Fire blazing on the third floor of the Adventist School in Guanaja, Honduras on Saturday morning, Oct. 2, 2021. The Bay Island of Guanaja, on the northern coast of Honduras, saw more than 200 homes and businesses razed by fire throughout the island. Some 30 church members lost their homes and/or properties. Church leaders and members sprang into action to assist in putting out the fires and gathering goods to distribute among the displaced individuals. [Photo: Bay Islands Conference]

Pastor Jorge Mairena, executive secretary for the church in the Bay Islands, which oversees the islands of Roatán, Guanaja, and Utila, said he and fellow administrators traveled from Roatán to Guanaja as soon as they were able. They arrived at noon. “It was a very sad and tragic scene,” said Mairena. “We had just been to the island the week before, visiting the churches, talking to the members as they had begun an evangelistic revival campaign.” The primary and secondary school, called Instituto Adventista de Guanaja, which has 130 enrolled students this year, was also going through a revival week of prayer, said Mairena.

Upon arrival, Mairena and fellow mission administrators found the guest evangelists, pastors, and members working hard to ensure the fire was put out. “We found the English Adventist Church had been saved from the flames, drenched from the efforts from the government’s air force helicopter fire rescue operations that morning,” he said. The third-floor structure of the school had apparently blocked the flames from getting to the wooden church, he said. The Iglesia Adventista del Cayo (for English congregation) in Guanaja was the first organized on the island in 1892. The church structure had been built during that time and has been refurbished through the years, he said. 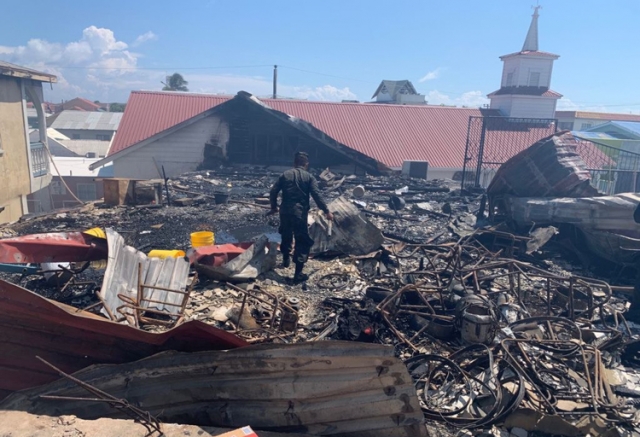 A view of the fire damage on the third floor of the Instituto Adventista de Guanaja, established in 1894. The church school is right across from English Adventist Church organized in 1892. [Photo: Joni Jim Santos]

Church leaders brought bread, food, milk, and water in the small boat. The Spanish Adventist Church on the island immediately set up its building as a distribution site, where church member volunteers assisted in aiding those affected by the fire. “I saw members working hard, no matter if they didn’t speak the language, were united in helping assist the community,” said Mairena. Other church members from neighboring churches prepared food for volunteers working tirelessly in the wake of the fire. The government of Honduras began sending goods to the distribution site for the church to assist from there.

Many of the members echoed their thankfulness to God for his protection and deliverance through the fast-moving fire, said Mairena. 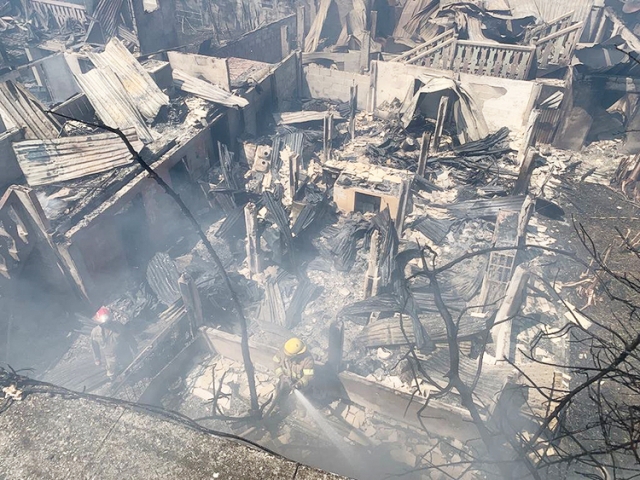 Fire fighter spray the walls of surrounding homes and businesses burnt earlier during the day next to the church school. [Photo: Joni Jim Santos]

At the moment, churches in Roatán and Útila are becoming collecting sites for goods to send to Guanaja in the coming days, added Mairena. “The most pressing need right now is food and clothing, and that’s what we are focusing on. Later we will coordinate with ADRA how and when we can assist with rebuilding.”

Even though the school suffered apparent damage to a classroom on the third floor, water from the fire hoses soaked the floors below, said Mairena. Leaders won’t know the extent of the damage until structural engineers make their final assessment in the coming days. 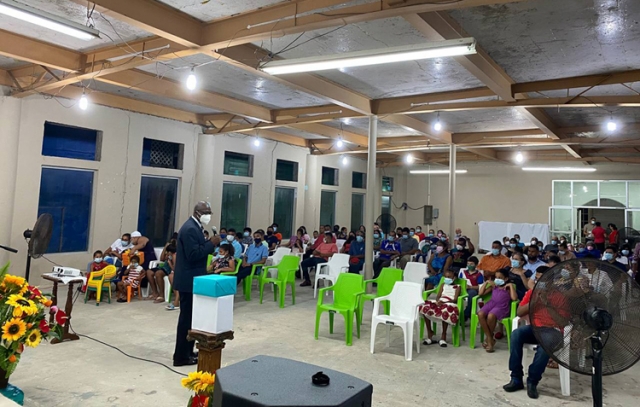 Pastor Miguel Adonia from the neighboring Bay Island of Roatán preaches during an evangelistic campaign held at the Hispanic Church of Guanaja. The evangelistic series across the island started on Sep. 25 and was to conclude on Oct. 2, with more than a dozen baptisms on that day. The church was soon turned into a distribution center for affected families in the community on Sabbath. [Photo: Jairo Orellana]

The bilingual school began the school year with a hybrid in-person and remote teaching model. Now the school is closed indefinitely, he said. “We know that two teachers lost their homes to the fire,” he said.

Churches across Honduras have been mobilizing members to assist in collecting food, goods, and clothing to ship to Guanaja, said Ramos. “We have also opened up a bank account to gather funds to assist during this difficult time for those who lost everything,” said Ramos.

The Adventist Development and Relief Agency (ADRA) in Honduras is scheduled to assess the needs on the ground in the next few days, said Ramos. 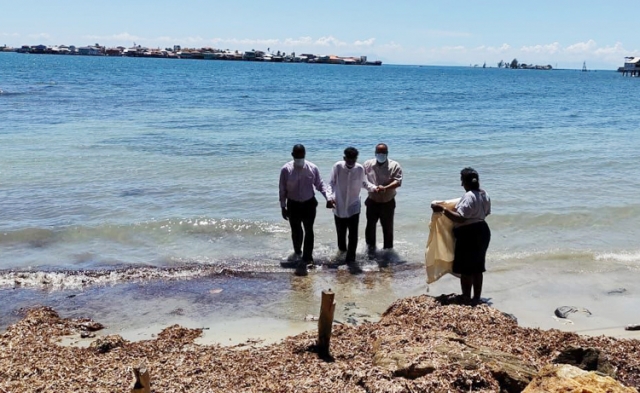 Simeon Gabriel Mclean (center) is helped out of the water after he was baptized on Sabbath, Oct. 2, on a tiny island key in front of where the fire hit it Guanaja. Mclean and another person were baptized as a result of last week’s evangelistic campaign efforts. More are scheduled to be baptized in the coming weeks. [Photo: Daniel Tathum]

The island of Guanaja has a lot of meaning to the Adventist Church, not just in Honduras but all Central America, said Pastor Ramos. “The Advent message got to the island in the 1890s and the first church organized was on Guanaja in 1892. Two years later the first Adventist School was inaugurated.” It was from Guanaja that the Adventist message spread across Central America, he explained.  “At one point the entire population was Seventh-day Adventist, and today, even though the island has grown [to more than 5,500 people], many consider themselves Adventists even though they might not be members or church goers.”

There are more than 3,600 Seventh-day Adventists worshiping in 31 churches and congregations across Roatán, Guanaja, and Utila, which are overseen by the Bay Islands Conference. The conference operates seven primary and secondary schools on the islands.

This story originally appeared on the Inter-American Division website.

Title image: A view from the church and school in Guanaja before the fire hit the third floor of the school. The wooden church was left unharmed. [Photo: Bay Islands Conference]