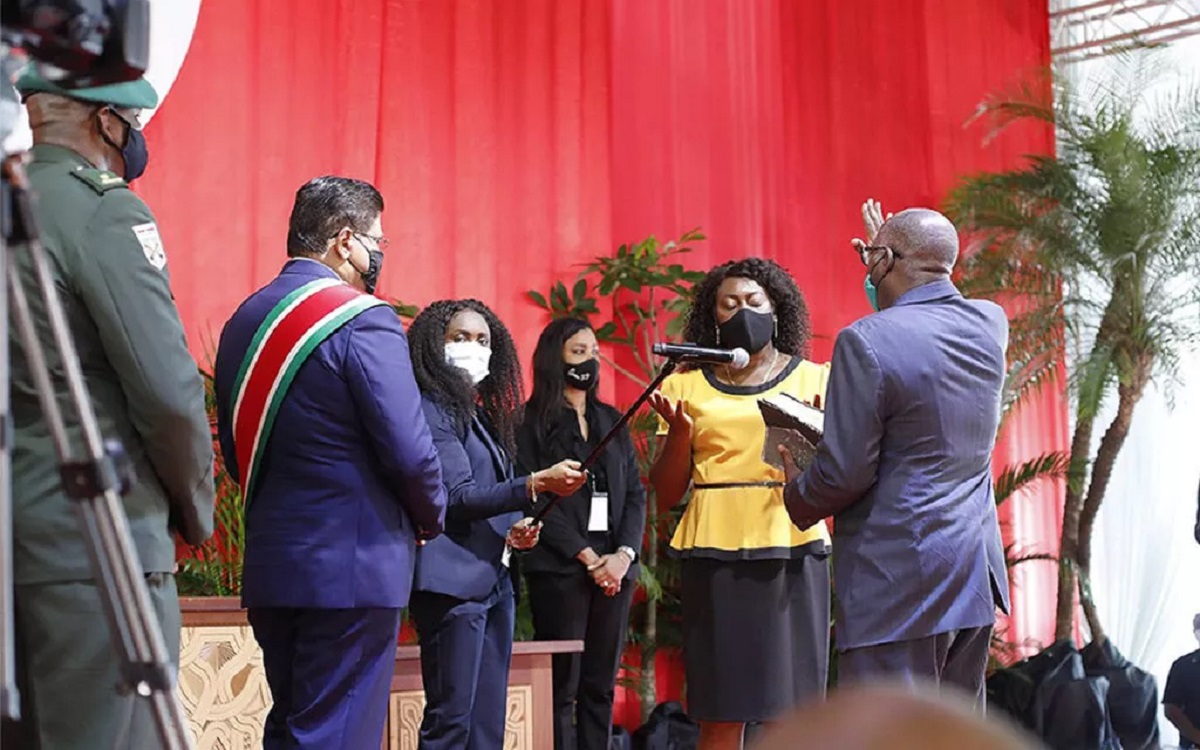 Saskia Walden became the first Seventh-day Adventist in Suriname to be appointed as a cabinet official to the new head of state and head of government President Chandrikapersad Santokhi. Walden was sworn in as the Minister of Economic Affairs, Entrepreneurship and Technological Innovation, during a special ceremony of the National Assembly, at Independence Square, in Paramaribo, Suriname, on July 16, 2020.

Minister Walden, a native of Suriname and a member of the Central Adventist Church in Paramaribo, has served the church throughout the Caribbean Union, and Europe for several years in various capacities. She was prayed for by President of the Church in Suriname Pastor Edward Blackman during a televised swearing in session among other new cabinet members and government leaders.

“We congratulate you on this memorable day and wish you a lot of insight, wisdom, mostly courage and discernment to do your work with honor,” said Blackman. “A very known quotation within our fellowship of believers, which you have certainly heard of is the following: ‘We have nothing to fear for the future, except as we shall forget the way the Lord has led us, and His teaching in our past history.’”*

Devoted to God and the church

Pastor Blackman read Isaiah 41:10 and Numbers 6:24-26, as he pronounced a prayer of blessing for a successful period for Walden as a minister in Suriname. “I know her responsibilities will not be easy but we are including her in our prayers and her colleagues in the government as well,” he said. Blackman, a fellow Surinamese and friend of Minister Walden, said she has grown in the church and been very active throughout the years. “This was big news in the Adventist Church,” he said.

According to Blackman, several church members have made it to leadership positions in parliament in the past but none had reached the level of presidential cabinet member. “She is a leader, goes for her goals and achieves them,” he said. 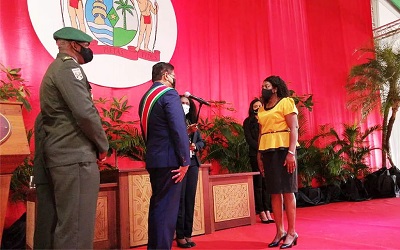 President of Suriname Chandrikapersad Santokhi (left) addresses the new member of his cabinet Minister of Economic Affairs, Entrepreneurship and Technological Innovation Saskia Walden as she is sworn in during a televised ceremony in front of government officials on July 16, 2020. [Photo: Facebook/Nationaal Informatie Instituut]

Pastor Reinder Bruinsma, former president of the Netherlands Union Conference, in the Netherlands, remembers her as devoted to her God and her church. Walden served as treasurer of the conference from 2003-2005, during Bruinsma’s administration. “I got to know her quite well and have very good memories of that time.” Church leaders there had hoped she would have stayed longer but her visa and work permit cut her time in office short.

“I am really not very surprised that in the years since she was with us she built a successful career in Suriname and that she has now been selected for a high national office,” said Bruinsma. “We are very proud to know her!”

Minister Walden is an accounting expert with over 15 years international work experience and has led her own consulting firm in Suriname for more than 15 years. 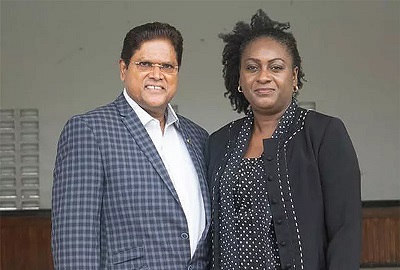 President of Suriname Chandrikapersad Santokhi and Minister Saskia Walden pose for a photo in 2019, before their newly appointed leadership positions this month. [Photo: Courtesy of Saskia Walden]

About her recent appointment, Minister Walden, said that she feels blessed and challenged by the task at hand. “God has given me the opportunity to serve others, because one of God’s mission for us is that we have to look out for others, and I trust that He has led me in the past and will be able to lead me through this.” The challenge ahead is talking with government leaders together about ways to solve problems and finding common ground to move the country forward, she said.

“It is my intention to provide Surinamese the facilities to be gainfully employed or able to start their own business,” said Walden. By coming up with the right treaties, the right commissions and boards, more opportunities could be available to entrepreneurs in the country, along with establishing strong relationships with Europe, the United States and Asia. “We have to provide a level playing field for entrepreneurs in Suriname so there will be fair competition, new entrepreneurs can obtain some government assistance with visible transparency within the government.”

As far as technology and innovation, she wants to establish closer relationships with developed countries to improve technology and upgrade opportunities for a high potential of success in Suriname.

Economic lessons from the Bible

“Many people know that I am a Christian and believe in God,” said Walden, who has her church family pray for her in her five-year term position. She draws economic and financial lessons from the Bible.

“Everything about Jesus’s message applies to the economy and finance,” said Walden. “In the parable of the talents, He teaches that we need to use what we have, give an opportunity to encourage people to achieve the best they can achieve within the gifts God makes available to them.”

“You have to stick to the Branch to become the fruit,” she said. “You must look after another just like He taught in the parable of the Samaritan. When we look after each other, the community does better. That’s the big spiritual lesson.”

Her message has been clear during the years she worked in the community. “Whatever God wants you to achieve, you can achieve, as long as you achieve the highest God wants for you,” said Walden. “It’s about helping someone else get the best out of themselves.”

She reflects on all Bible stories of the great giants like Daniel, Esther, Joseph, and others who at the time were surrounded by many who didn’t believe in God. “We can be a blessing to the community even if it is just a few of us. We must have love for each other.”

Learning to speak up early on

It was the very corruption, immorality and public injustices she saw in her country that led her to speak out and get involved in community projects that could better the lives of citizens and entrepreneurs, amid an economic downturn challenging the nation for over a decade, she said. As Walden spoke out, she said she was offered a platform to get her message across in a more public way and work toward better changes in Suriname.

From the time she studied at the Suriname Adventist primary school in Paramaribo, she remembers participating in the ingathering campaigns to raise funds to help others, distributing literature and taking part in community projects. “It was during that time at six years old, I remembered learning to speak up to help others,” said Minister Walden.

This article was written by Libna Stevens and originally appeared on the Inter-American Division website. Steven Tulp contributed to this article.