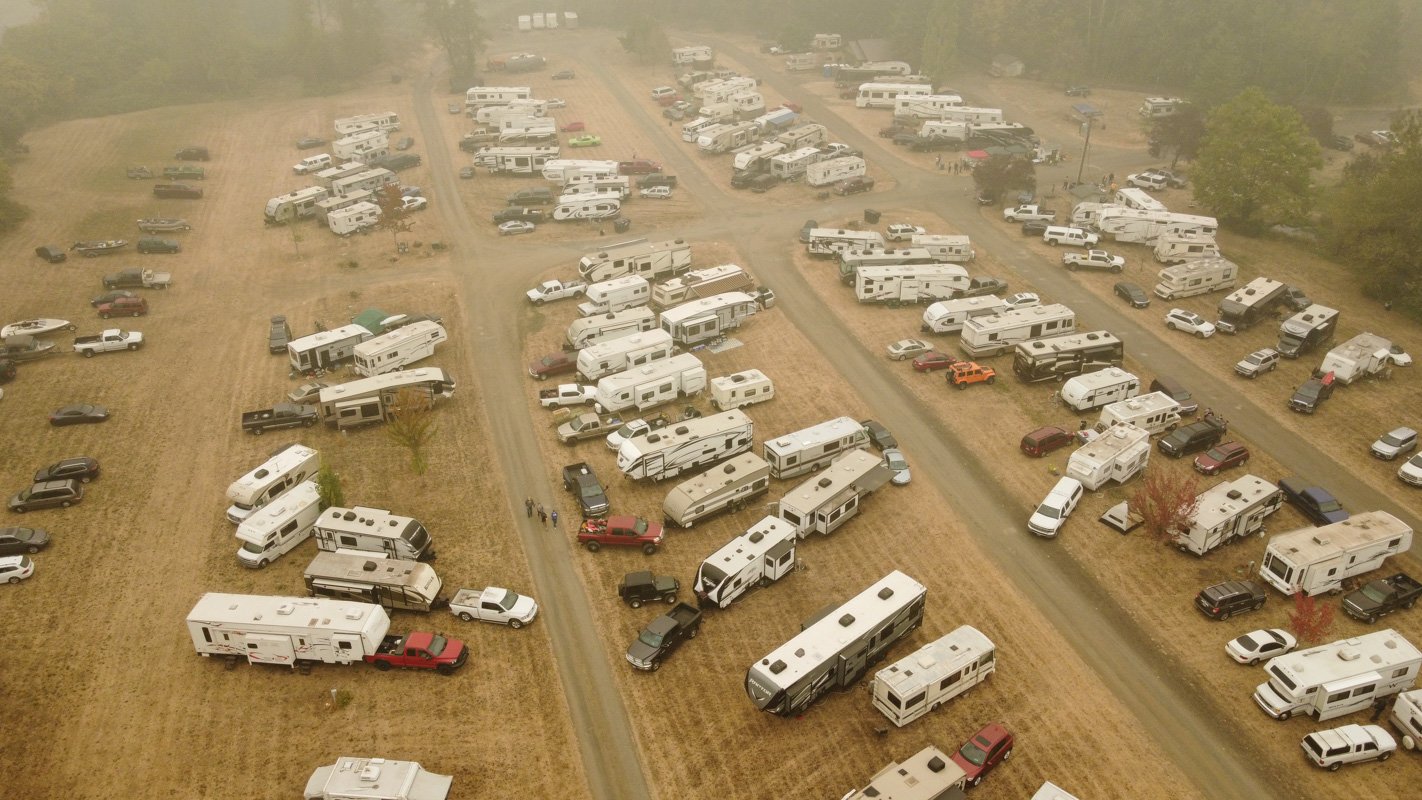 -Reports indicate that all conference properties have survived the fires

-Many still await to know whether their homes survive

Across the West Coast of the United States, dozens of wildfires, spurred by punishing winds and historically dry conditions, have devastated communities over the past week. For the Oregon Conference of Seventh-day Adventists, church leaders and members have worked to serve their communities while often under the threat of fire themselves.

As of Sunday, fires have burned more than a million acres in Oregon and killed at least 10 people, officials said. The Oregon Conference has turned its headquarters, located in the Portland suburb of Gladstone, into an evacuation site available to the thousands of people displaced in the area. 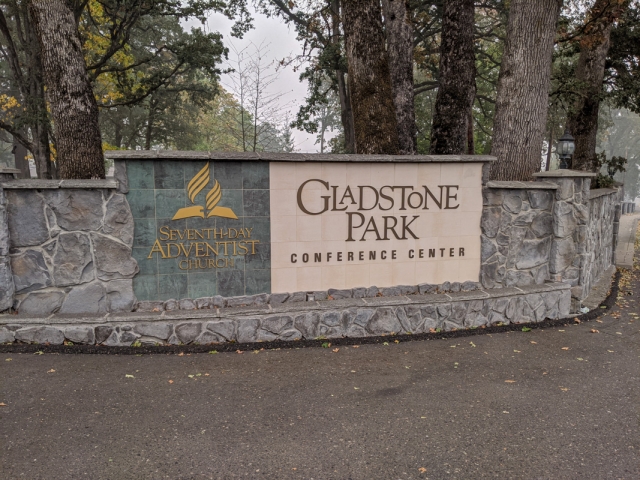 The week began with high winds across the region that toppled trees and powerlines, igniting new blazes and fanning to life ones already smoldering. In Northwestern Oregon, the winds reversed their customary direction and blew from the east, pushing fires toward the higher populated areas of the Willamette Valley. It was a recipe for disaster.

Mel Hickman is a member of the Gladstone Park Seventh-day Adventist Church, and just a few weeks ago he moved with his fifth-wheel to a property out in the direction of the mountains. On Wednesday afternoon he took a nap and awoke to a dark sky.

“I though man, have I slept for 12 hours?” he said. “I walked outside. You know the old movies of people on Mars, where just everything is red? It was like that. Everything was red.”

On Thursday, ash began to fall and Hickman could hear the concussion of trees exploding from the fire. Officials soon gave the order to get out immediately, and he brought his trailer to the Gladstone campus.

The conference headquarters spans 80 acres and is equipped with 569 RV sites, normally used for the annual camp meeting that draws in thousands of attendees. The rest of the year the camp sites sit vacant. As the fires exploded in size, it became clear that all that camping space could be put to vital use.

Chuck Burkeen is the ministerial director of the Oregon Conference; he and his wife live in Estacada, one of the small towns east of Gladstone. On Tuesday, noting with alarm that the fires were approaching, they packed and headed to the conference office—even though there was not yet a mandatory evacuation.

“We were actually the first ones, I think, that were here,” Burkeen said on Saturday, standing in front of his tent trailer. 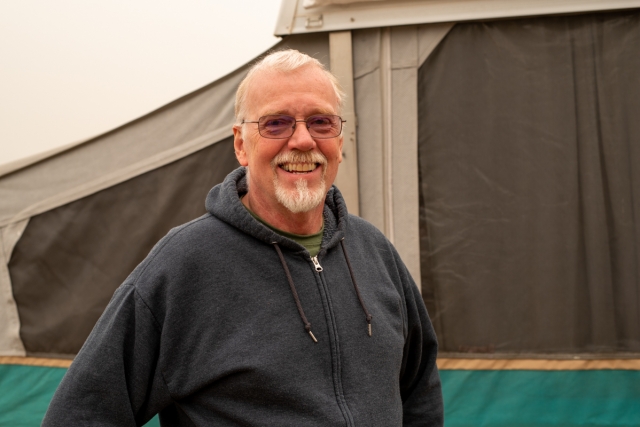 As the scale of the unfolding disaster became clear, Portland Adventist Community Services (PACS)—a local charitable organization—and the Red Cross began talking with the Oregon Conference about opening the headquarters property to the public. Plans rapidly went into motion and the site was added to the handful of locations advertised by the local government to residents. By Wednesday morning there were a few more RVs, Burkeen remembered, and then many more kept arriving throughout the day.

“That’s when we started calling for volunteers,” he said. Church members, pastors, conference employees, and other members of the public signed up for shifts and came to help manage the growing encampment.

On Thursday, one of the other county evacuation sites, located just four miles from Gladstone, closed due to the advancing fire, sending more trailers and RVs their way. 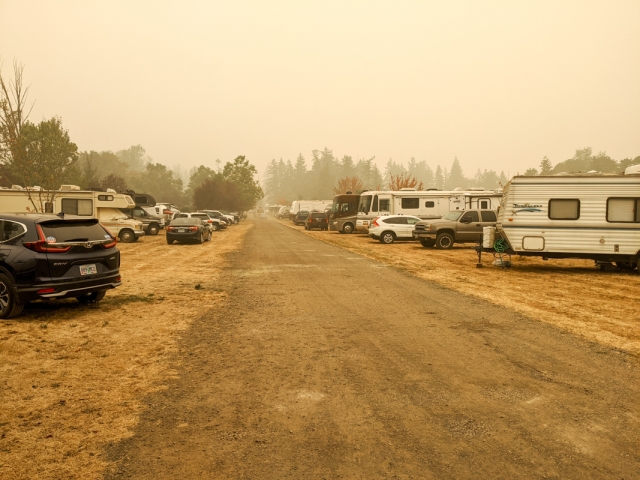 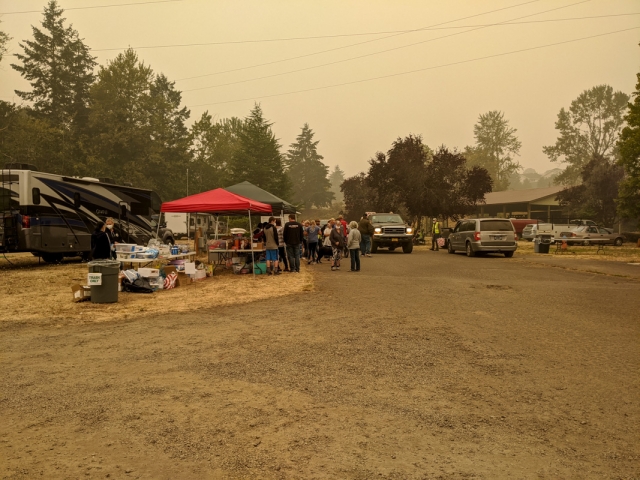 Volunteers help distribute food and supplies. Upwards of 100 trailers and RVs are on the property.

Although the Red Cross had hoped to help manage the site, with the demand on resources statewide it soon became clear that the conference would have to do much of the heavy lifting. 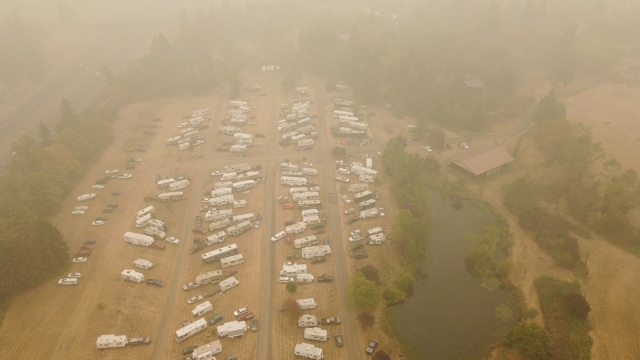 From above, the hazardous air quality affecting much of Oregon is apparent (photo courtesy of Kurt Jensen)

By Saturday, a thick layer of smoke still hung over the Oregon Conference headquarters but the air was cool and still; the hot winds had abated and meteorologists promised that the changing weather would finally give firefighters a chance at turning the tide. Satellite heat signatures showed the fires in the northern part of the state had largely slowed their advance, though the ones closest still were 0% contained. On Sunday, forecasters announced that fires in Southern Oregon could be rekindled by strengthening winds.

For all those displaced at the encampment, the days have largely turned into a waiting game. Brenda Rider and her husband live in the town of Mulino, in a historic grist mill built in 1850 and now turned into a residence.

“The whole sky was red and pink,” Rider said, of when they had to evacuate. “It was more like something that looks like what you think hell looks like, with the color of red.” Brenda Rider was still evacuated on Saturday, but optimistic that her home would survive.

At first, Rider and her husband left in a car with few possessions. The first night they had to sleep in the car. “That was misery,” Rider remembered. Later, they were able to slip back into the evacuated area and exchange the car for their motorhome, which they now have parked at the Oregon Conference site. So far, they think their historic home has been spared.

Chuck Burkeen is also optimistic that his home is still standing, though reports have put the fire 1/2 to 1 mile from the house. “But, it appears the fire crews have it stopped advancing,” he said.  Even so, it may be some time before they are able to go back.

Although a number of Oregon Conference properties have been threatened by the fires and are located in evacuation zones, initial reports indicate that all have survived. A small church in Mill City, where fire swept through, survived, Burkeen said.

At the headquarters, the Oregon Conference is preparing for the evacuations center to stay open for the foreseeable future.

“We’re at the place where we have organized command structure to be able to ride this as long as we need to,” said Jonathan Russell, Assistant to the President for Multimedia Communication, on Saturday. “It’s going to be days, for sure, and possibly a few weeks.”

The conference has been receiving guidance from the Red Cross, who praised their efforts and organization, Russell said. Local aid organizations and business have been helping to provide free meals. 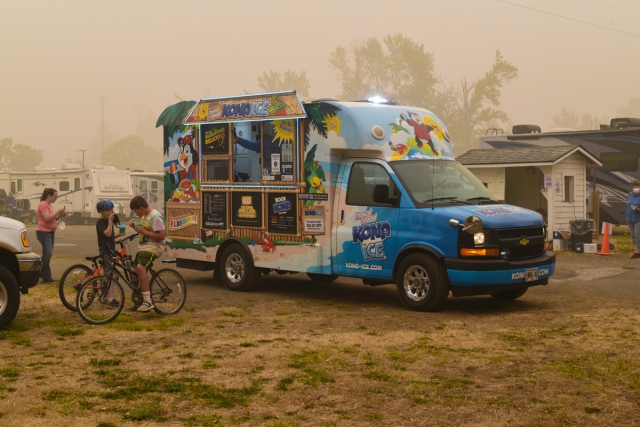 “We’re committed to providing a place until we’re able to wind down this crisis situation, with our county partners,” Russell said.

The conference has received many donations of food and supplies, and now is asking for cash donations to meet specific needs, for which there is a specific wildfire fund. The Red Cross maintains a list of all available evacuation sites.

Photographs by Alex Aamodt for Spectrum