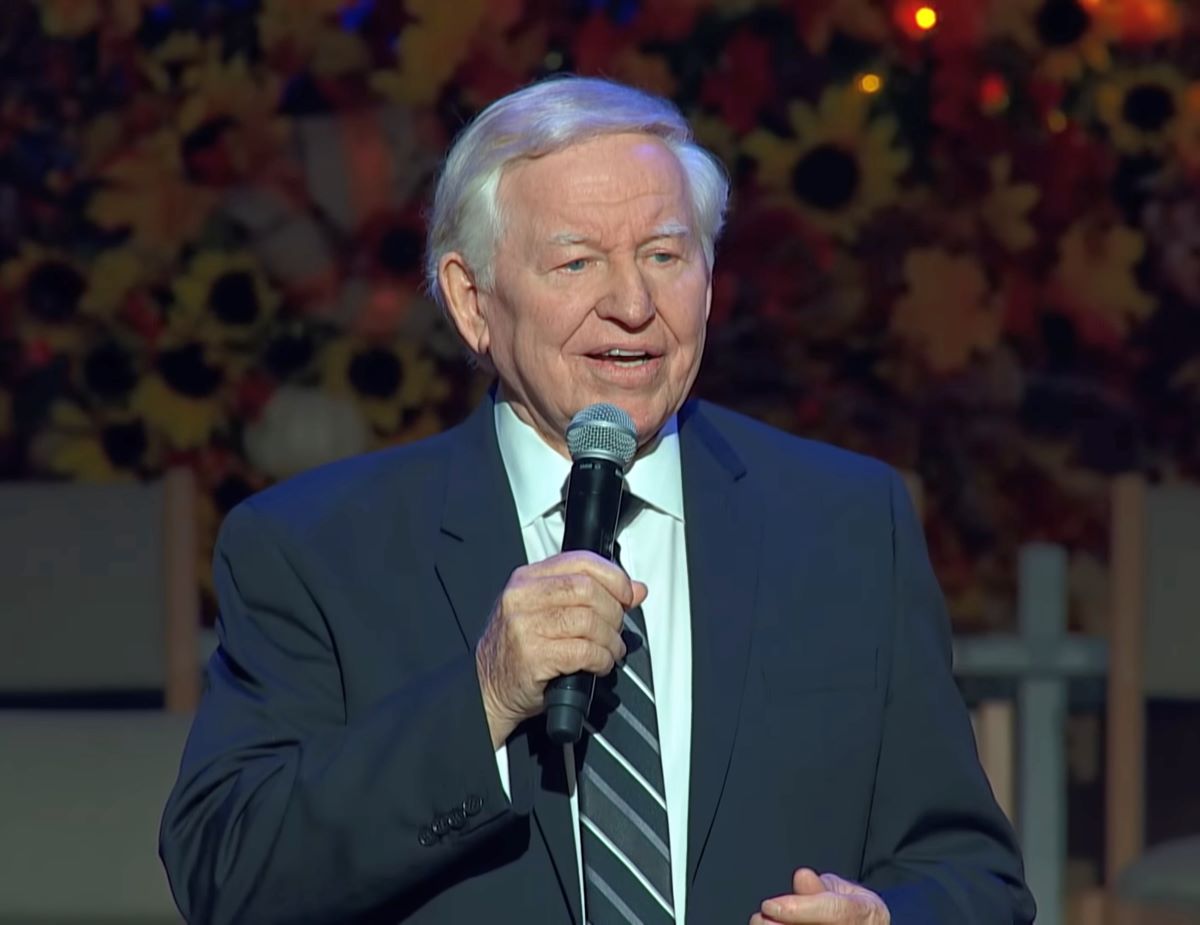 Following a battle with cancer, Seventh-day Adventist music legend Max Mace passed to his rest November 4, 2020, one day before his 83rd birthday. His family said Mace was home in Placerville, California, United States, when he died.

In 1971, Mace and his wife, Lucy, who survives, formed the Heritage Singers, devoted to Christian music. Both Seventh-day Adventists, the Maces wanted to bring contemporary harmonies to their fellow believers. Over the next five decades, the Heritage Singers would employ an aggregate of 300 singers—generally eight at a time—and hold concerts in more than 80 nations. The number of people who saw them in person likely numbers in the millions, a figure multiplied exponentially by those who heard their recordings on vinyl, CD, or over the airwaves.

“He knew his calling was just music ministry, and just loving people,” said John Lomacang, a Seventh-day Adventist pastor, evangelist, and singer who sang full-time with the group from 1984 to 1986 and continued part-time for 20 years beginning in 1989.

“He had an ear for the Heritage ‘sound,’” Lomacang added. “Although the group’s roster has changed throughout the years, it still has a sound that is unmatched. No other group with eight singers that had that sound. He knew what he wanted; he knew it instantly.”

That sound—abundantly available online via YouTube and streaming services—was always upbeat, accessible, and aimed, as Lomacang said, “at the heart.” He was happy to incorporate contemporary Christian tunes and arrangements into the group’s repertoire.

Heritage performed songs made famous by artists such as Amy Grant, Michael English, Bill Gaither, and others. The music was presented, however, in a comfortable format that resonated with audiences. Even overseas, where English wasn’t the audience’s first language, crowds sang along as Heritage presented music that praised Jesus.

Sought Decisions for Christ at Every Concert

Each concert ended with Max making an appeal to audience members for a commitment to Jesus as Savior. Mace, or one of the singers, would pray with each person who came forward.

Mace, the youngest of three brothers from Eagle, Idaho, was a singer from his youth, forming a trio with brothers Jerry and Ron; the brothers also played softball. At Idaho’s Gem State Adventist Academy, he sang in quartets, something he continued at Walla Walla College, now Walla Walla University.

While in college and playing softball, Mace got a job in the campus bakery, where a young woman named Lucy Hatley would walk by every morning. She was a senior at the college’s academy, or high school, and musically gifted. The couple married a year after her high school graduation and marked 62 years of marriage early in 2020.

The Maces worked at United Medical Labs in Portland, Oregon, where they also led a singing group called the Rose City Singers the company sponsored. This experience led the Maces to form a full-time touring group, presenting Christian music.

Those early days weren’t always easy. Son Greg Mace—a sound engineer for the group and whose firm provides audio engineering at major concerts for other artists—recalled the story of Heritage’s visit to the Soquel, California, camp meeting in 1971. Singing music to which some were unaccustomed, the congregation fell quiet during the performance. A conference president told Max, “I’ve never seen a group make this place go quiet,” Greg recalled. In 2019, Heritage returned to a far more enthusiastic reception at Soquel, even from some who were at the 1971 meeting.

From Buses to Overseas Tours

But the requests came in, and soon the Maces and their singers plied America’s highways traveling to concerts. At that point, Max and Lucy sold their house and bought an old, rusted Greyhound Scenicruiser bus sight unseen (two vocalists were deputized to select and buy a specific vehicle) and hit the road.

With a paint job and lettering reading “Heritage Singers U.S.A.,” the bus became a rolling billboard for the group, featuring on at least one album cover. Record sales at concerts, and freewill offerings, were often the only means of support for the traveling musicians, and sometimes those offerings were slim. As Lomacang recalled, Mace was undeterred.

“There were times when we didn’t cut it financially because of offerings. Max had endurance. He would say, ‘That wasn’t that great, but let’s keep going,’” Lomacang said.

Eventually, the music of the Heritage Singers found an audience within Adventism and other Christian churches, expanding overseas. One overseas church member who saw Heritage in the U.S. came away impressed with the music and its results.

“The first time I heard the Heritage Singers I was working on my master's degree in music at Andrews University,” said Williams Costa Junior, a Brazilian Adventist pastor, composer, and arranger who today directs communication for the General Conference. “In 1975, they gave a concert at the Pioneer Memorial Church. It was unforgettable. That ministry touched me deeply. I also saw many young people attending that concert and go forward during the altar call. The spiritual impact on the audience was visible.”

Costa credited Heritage’s positive reception in Brazil with creating opportunity for local musicians to expand their own services within the church in South America. “I will forever be grateful to Max for his vision, passion, and dedication presenting Jesus and the message of salvation through music in such inspiring way,” he added.

The group regularly toured in Europe and had planned 2020 concerts in the Czech Republic and Romania before the global pandemic made such travel impossible. For 35 years, Heritage had an annual post-Thanksgiving concert at the Loma Linda University Church featuring a packed auditorium of enthusiastic hearers.

Daughter Val Mace-Mapa noted the group has over 200,000 Facebook followers, and that news of Max’s passing brought more than 1,000,000 comments on the Heritage page. She remembered her father not only as her “best friend,” but also as someone who was “the most forgiving. He always wanted to make sure that if there was a wrong, that it was made right. When he forgave, he never remembered the offense.”

Perhaps the highlight of the group’s decades-long existence was a 2016 concert in Ontario, California. More than 140 of the group’s singers through the years—including Magdiel Pérez Schulz, assistant to General Conference president Ted N.C. Wilson—gathered on stage for three hours of singing and praise. The concert’s DVD and CD recordings are among the group’s most popular; the music streams on many popular services including Apple Music and Amazon Music.

Singer Jennifer LaMountain, though never a part of the group, came to know Mace and Heritage during her professional career, and remembered Max’s high standards: “Excellence was always a part of anything that he did. Anybody in his sphere could not help but be influenced by that. He brought out the best in everybody who was around him.”

According to Tony Anobile, a Seventh-day Adventist pastor and a vice president of the church’s North American Division, Mace’s impact was immeasurable.

“We won’t know this side of heaven the lives of people he touched, brought to the Lord or kept in the Lord. Max had a unique style, and people love it,” he said. Mace and Heritage “were great ambassadors for the church in terms of preaching through music.”

And Conna Bond, who met her husband Mark while on tour with Heritage, remembered Mace as “one of the gentlest people I’ve ever known. He was very much loved not just by the immediate family, but by the Heritage family and extended family of performers.”

Along with Lucy Mace, survivors include a brother, Jerry, daughter Val and husband Art Mapa, son Greg and wife Adriane, and grandchildren Austin Mapa and wife Chloe, and Amber and Bella Mace. A private interment will take place in Placerville, California, with a public memorial service anticipated for a future date at the Loma Linda University Church.

“He was always extremely genuine, kind, loving, cry at the drop of a hat, he was generous, and forgiving. He was truly a model of Jesus, he truly was,” he said.

Davis added, “I can tell you Max Mace was the absolute real deal. He was a hero; he was mine, for sure.”

This article was written by Mark A. Kellner for Adventist Review, where it originally appeared. It is reprinted here with permission from the publisher.