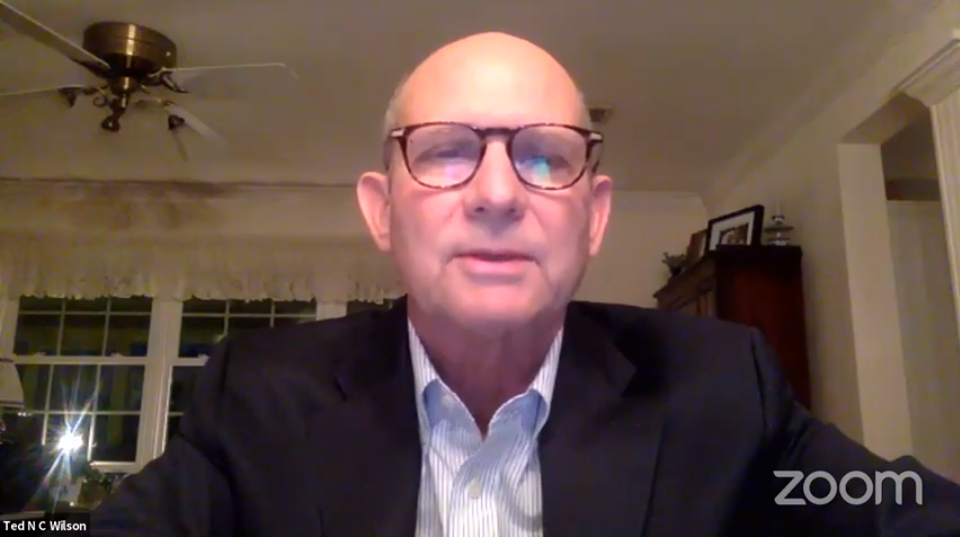 Although most of the world is on lockdown because of the coronavirus, the General Conference Executive Committee convened on Tuesday and Wednesday, April 14 and 15, via Zoom. To accommodate the many time zones from which people were calling, the meeting began at 6 a.m. (Eastern time). Speaking from his Maryland home, General Conference President Ted N. C. Wilson began by acknowledging the strange times in which we are living. “But, let me tell you the Good News. There are a lot of people asking questions and open to the spirit of the Lord leading them to truth. And God is going to use this in a magnificent way,” he said to the 112 members of the committee who had registered, plus those who were viewing the livestream of the call on the Executive Committee website.

Before the primary issue of finances was addressed, there was prayer for countries with high death rates from the virus, plus prayer for personal requests, including Elder Wilson’s for his oldest daughter Emily who has a tumor on her left lung. Prayers were offered throughout the meeting in indigenous languages, often by the treasurers and secretaries from various regions. Mark Finley provided the devotionals. He likened the whole armor of God in Ephesians 6:12 to the Personal Protective Equipment used by medical personnel as they treat COVID patients. He challenged participants to gird themselves with daily devotions and meditation, to be still and know that He is God.

Good cheer seemed to persist throughout the meeting, despite the dire circumstances in the world and church. Juan Prestol-Puesan, treasurer of the General Conference, focused on the increase in investment earnings that had given the General Conference a positive ending to fiscal year 2019, despite the fact that worldwide tithe decreased by USD 120 million. Net assets increased USD 2,599,238.39. Operating expenses were almost USD 4 million under the annual budget. The figure for the total budget is determined by a percentage of world tithe, referred to as the Operating Cap. So, while in October, enabling actions had been voted to approve using reserve funds, if needed, to balance the budget, the reserves remained untouched.

Further discussion of what will happen in 2020 with the looming economic recession may necessitate a special session of the Executive Committee, members were told. Wilson suggested it will be May or June before the General Conference will have a true picture of what is happening to the tithe since states and countries shut down and in-person worship services at local churches were cancelled.

Another financial challenge for the General Conference as it balances its operating budget is the tithe parity that was approved in the fall of 2019. Over the next four years, NAD will be decreasing the percentage of tithe it sends on to the General Conference by half of one percent each year while the other world divisions will increase their tithe percentage by one tenth of one percent. Prestol-Puesan showed a chart diagraming the projected curve in the decline in funds as this policy takes place, noting that the General Conference will never again have the amount of money that it had in recent years for its budget. In 2018, members gave the greatest amount of tithe in the history of the church, and the GC budget is based on a percentage of tithe.

Chairman Ted Wilson called for a voice vote on the Treasurer’s report and a cacophony of noise erupted as the microphones were unmuted and background noises overwhelmed the vote itself. But the report was approved.

An additional vote was taken to accept the personnel changes being made because of the anticipated decline in revenues from tithe parity. The General Conference budget is being cut by $1,756,410, and that is prompting elimination of three elected positions, plus not filling three others. What those positions are was not disclosed to the committee. But because of the cuts, the Nominating Committee did not meet as it usually does at this meeting.

Auditor Paul Douglas was then called upon to present a report on Compliance with Policy. To begin, he noted that in 2018, audits showed that 79% of church organizations had at least one violation of core policies such as financial reports, lack of audit committees, insurance coverage, conflicts of interest, service records, and operating deficits. The Divisions had been given the assignment to come up with a plan to address these issues in their respective territories. He then read the to do lists each division had created.

And that was the only discussion of compliance this year. There was no mention of the Compliance Committees voted in the past or the issue of Women’s Ordination that had prompted their creation.

The postponement of General Conference Session until 2021 required re-negotiation of contracts with the Convention Center in Indianapolis, plus the hotels. All activities will now be held in the Convention Center. Lucas Oil Stadium that was going to serve as the Exhibit Hall, will not be utilized. When Chairman Wilson asked if there were any questions, Neil Nedley asked if the GC had been notified of plans by an independent ministry to retain the Stadium, run the exhibits, and reap the benefits. Wilson responded that the GC must look at things in a careful way in the future, and that the plan was to go to Indianapolis to do the work of the church and that’s all. He also noted that they were considering a virtual exhibit hall, where people could purchase things online.

On the second day of the meeting, Chairman Wilson abandoned voice votes because of the noise (“We’re learning as we go,” he said), and Committee members got the hang of how to signal that they would like to make a comment, making for much more discussion than the previous day.

Mike Ryan, a now retired vice president of the General Conference who has helped with the Strategic Planning Process for the past 10 years, reported on the next strategic plan for the years 2020-2025 entitled “I Will Go.” Approved at Annual Council last year, the plan was set to launch at the General Conference Session. Now, with the Session being postponed, the decision has been made to go ahead and launch the program anyway, because “everyone needs to be involved.” The rollout will be online July 3 and 4 with a Friday night vespers, a Sabbath School program, and a worship service. Ray Wahlen said the treasury department would be looking at resource alignment, in other words how budgets support the plan goals. A communication plan has been compiled using social media, YouTube, and podcasts. Jennifer Stymiest asked for stories from each division. David Trim described the research that is planned to test the Key Performance Indicators included in the plan. He concluded his part of the presentation with the words of Isaiah 6:8, “Who will go? Here I am. Send me.”

There was no discussion of travel bans and the impossibility of anyone going anywhere anytime soon. Before the affirming vote was taken, Elbert Kuhn spoke about the origin of the idea for the program. Students at River Platte University had conceived it in 2009 and it started a movement. He noted that it’s personal, not possible to outsource, reaffirms mission as top priority of the church, reaches out to young people and all demographics. It was approved.

Sexual Abuse Prevention, the most lively topic of the Spring Meeting, was the next thing on the agenda. Gary Krause briefly told of the General Conference and Division Officers meeting held last week where Divisions brought their local plans for preventing sexual abuse and shared them.

Wilson said that it had been a “tremendous move forward.” He added they would not be publicizing the reports from the Divisions. They simply wanted to record that great progress was being made.

Ginger Ketting-Weller had the first question. She suggested that the Mission Institute sessions for new missionaries would be a great place to do training on this topic. Is it included in their curriculum?” she asked.

Wilson turned to GT Ng, who turned to Karen Porter for an answer. “Yes, she said, “it is covered.”

Several others made supportive comments. Then Lael Ceasar said that the pauses in the response to the first question made him feel awkward. He thought if an outsider were listening in he might wonder why this issue is not being addressed at the highest level of the church.

Wilson noted that they did not want to dictate to Divisions how to deal with the problem, but asked for reports to get things started. He said that confidentiality kept them from releasing the reports because five had included fairly detailed information.

As the conversation was drawing to a close Ginger Ketting-Weller posed another provocative question: “Why wouldn’t you want to have a worldwide approach to this problem?” she wondered, noting, “training, monitoring, and reporting are the key elements for stopping it.”

Wilson promised that this was just the beginning and that “maybe someday we’ll have it on the agenda in a more comprehensive way.” The vote to accept the report was 95 to 1.

Surprisingly, the issue that received the most divisive vote came at the end of the meeting — the consent calendar with its listing of offerings and meetings. When Wilson announced that the GC Administrative Committee (ADCOM) had decided to Zoom several meetings, including the pre-meetings for Annual Council this year, there were questions. David Trim asked if the ADCOM decision came as a recommendation, since it is the Executive Committee that has been designated to make the decision on how meetings are held. And, if people were going to be traveling to Annual Council anyway, what savings were going to come from Zooming the pre-meetings? After explanations and more comments, the consent calendar was voted 84 yes to 11 no. The 2020 pre-sessions for Annual Council in October will be via Zoom. But members seemed to have found their voices on the new medium. Upcoming meetings may be livelier with members only having to unmute their mics to talk, rather than having to walk down an aisle to a microphone in an auditorium to be heard.

The meeting closed with prayer for individuals who have contracted COVID.