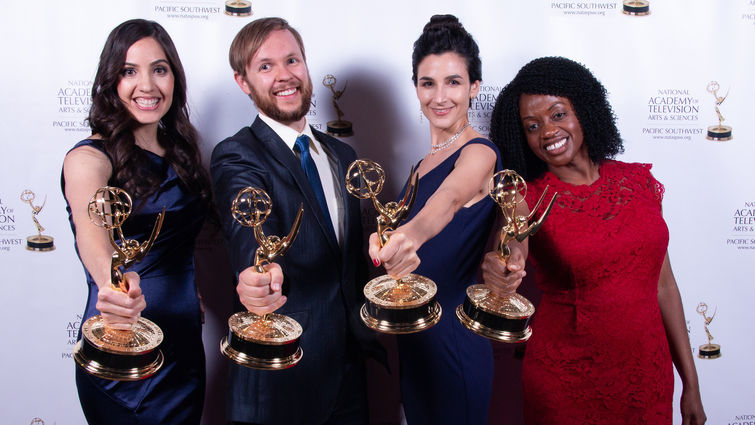 Mound City Films took home an Emmy® at the 45th annual Pacific Southwest Chapter of the National Academy of Television Arts & Sciences Emmy awards ceremony for its Life on the Line series episode about an Inland Empire teenager who received a heart transplant.

Mound City Films was one of two films teams that won the best program or special for the health/science category. The production house’s episode “Love for Lexi” followed a 16-year-old whose heart stopped just weeks after being diagnosed with a rare form of heart disease, which got her placed on the heart transplant list. Following this tragedy, she received her care at Loma Linda University Children’s Hospital. The episode shared her journey through the eyes of her doctors and family while they all fought for her life. Lexi eventually received a lifesaving heart transplant and is now thriving.

Life on the Line showrunner, Patricia Kelikani, says it is a privilege to tell the stories like “Love for Lexi.”

“It’s an honor to share stories on television of those who inspire and create meaning out of life’s darkest moments,” Kelikani said. “The amazing individuals featured on the show remind us to never give up and to live life to the fullest.”

In 2016, Life on the Line won its first Emmy in the category of health and science for a NICU episode called “Rough Beginnings.” The following year, the show took home seven Emmy awards for its third season. This month’s award was Mound City Films’ 14th Emmy.

Life on the Line is a real-life television show narrated by TV personality Lisa Ling that features compelling stories of hope and courage from Loma Linda University Health. The series gives a unique, up-close look into the lives of those faced with immense tragedy, revealing the resilience of humankind in the Inland Empire.

This article was written by Heather Jackson and originally appeared on the Loma Linda University Health website. It is reprinted here with permission.

Image: Members from the Mound City Films accept their Emmy win for one of their Life on the Line episodes at the Pacific Southwest Chapter of the National Academy of Television Arts & Sciences award ceremony in Las Vegas, Nevada. Photo courtesy of LLUH.